In Mota and Jaloya villages, people are now dependent on government tankers. Most often, the water falls short.

A water tanker in Mota.

The Wire travelled over a thousand kilometres through Kutch and North Gujarat, the two worst affected regions, and spoke to pastoralists, farmers and families struggling for fodder and water. This is the first in a series of articles about the drought. You can read the full series here.

Both districts are going through one of the worst droughts in recent history. Kutch has received only 26% of its 30-year annual average rainfall, while Banaskantha has received 33%.

The talukas – administrative subdivisions – within which the two villages are located have fared even worse. Mota is located in Bhuj taluka, which has received 22% of its 30-year average rainfall. Suigam taluka, which contains Jaloya, has received only 10% of its average. 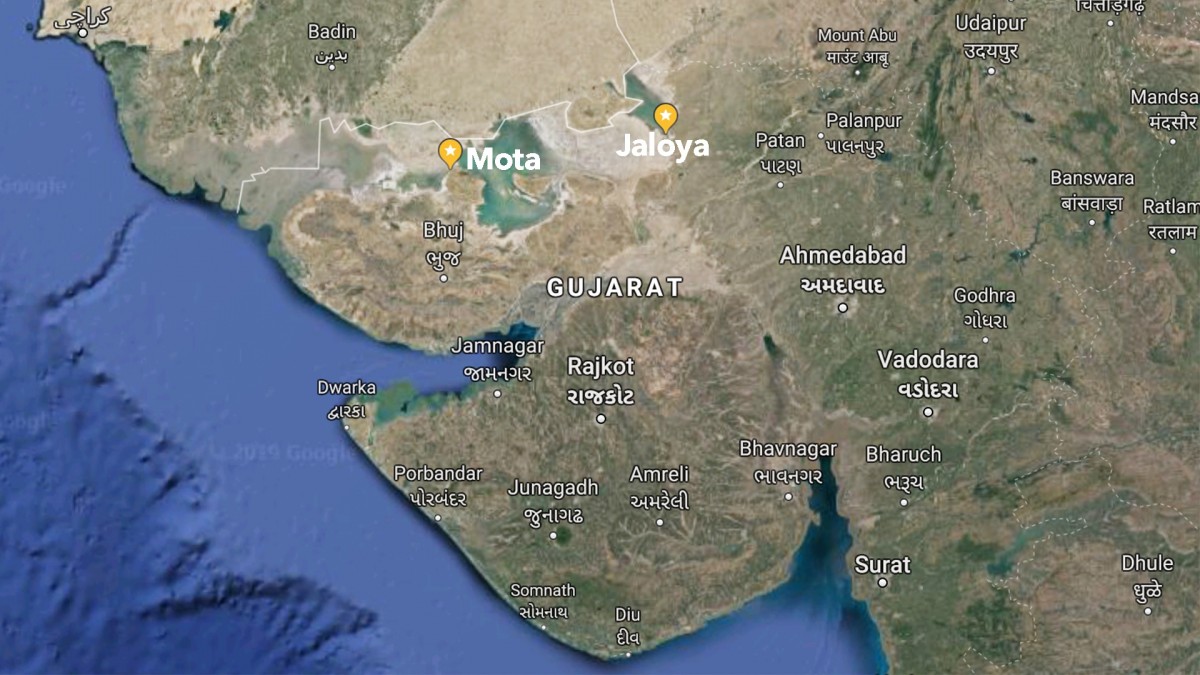 Both villages were visited by TV crews in recent days during the India-Pakistan military standoff after the attack on a CRPF convoy in Pulwama, which led to the deaths of 40 security personnel. Mota, too, played host to TV crews. “They asked us if any bombs were dropped on us,” said Mukim Hussain Jat, a 40-year-old cattle herder, laughing.

“We live close to the border, but our main concern is water and fodder,” Mukim said. Both are in short supply.

According to residents, Mota received rainfall only on one day in July 2018. “We saw dark clouds gather and it began to rain. The atmosphere turned festive,” Mukim told The Wire.

It stopped less than a minute later, recounted Mukim. “It came and went like a dream. And it never rained again the entire season,” Mukim said.

That is all the rain that Mota got in the southwest monsoon of 2018. It is a hamlet of around 1,100 people, almost entirely Muslim, about 85 km north of Bhuj. Mota is an arid region that receives little rainfall in the best of monsoons. “We know how to manage with the little rainfall that we get,” said Mukim.

In the 2018 monsoon, however, according to government data, Bhuj taluka received only 83 millimetres of rainfall. It, like all the other nine talukas of Kutch, was declared scarcity hit in September 2018. 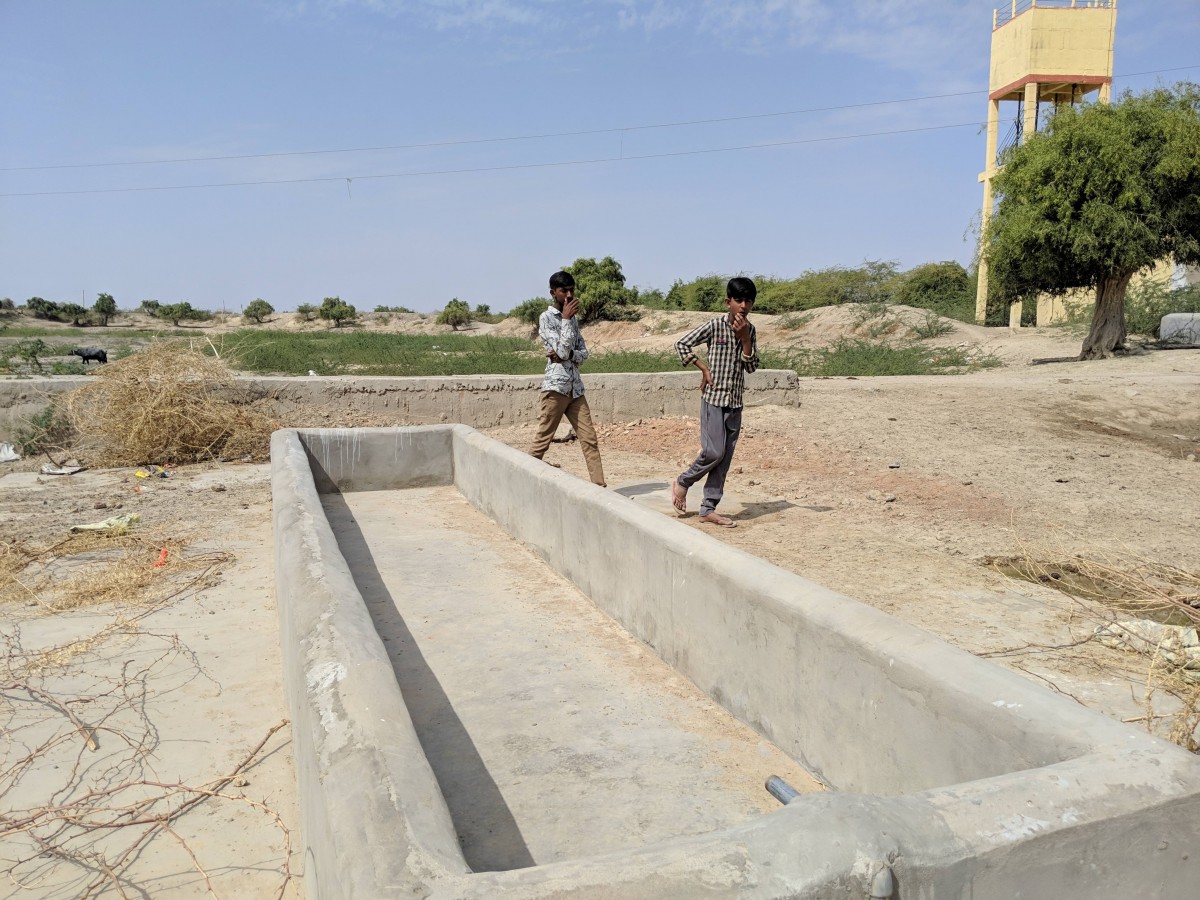 Kutch is a massive district, but sparsely populated. At 45,000 square km, it is larger than the states of Kerala and Haryana. Bhuj, its largest taluka, is almost three times the size of the state of Delhi.

“Eighty-three mm is the average rainfall for the Bhuj taluka. It is a big taluka. Certain parts have received barely any rainfall at all,” said a local government official.

In Mota, residents are entirely dependent on water tankers that are supplied by the government for their water needs. As we reached the village, a water tanker had arrived. It stood in a field, water flowed from a pipe at the back and collected in a concrete water trough. Cattle, most of them buffaloes, gathered around it. They were ushered one by one towards the trough, where they had a few gulps and then were moved away to make way for the next buffalo.

“It is crucial for us that every animal in the village gets enough water,” said Khalid Mohammed, standing next to the trough with a stick in hand to usher the buffaloes, who, to their credit, displayed restraint and discipline.

No fodder for cattle

Mota is comprised entirely of Maldharis – a semi-nomadic pastoral community that derives its name from its primary trade, Mal (cattle) and dhari (keeper). The main source of livelihood for the Maldharis is milk from the cattle that they own. The cattle get their feed from common grazing lands locally called gauchars.

Due to the paucity of rainfall, there is no grass this year. “If the rainfall had been normal, this entire area would have been full of grass,” said Khalid, standing in an open barren area.

The government, with the help of NGOs, has set up cattle camps where Maldharis are provided fodder for their cattle. It provides a subsidy of Rs 35 per cattle per day up to a maximum of 40 cattle per household.

That, according to the Maldharis, is not enough. “We get around 6-7 kg per cattle from the cattle camp. A buffalo needs around 10-12 kg a day,” said Khalid. 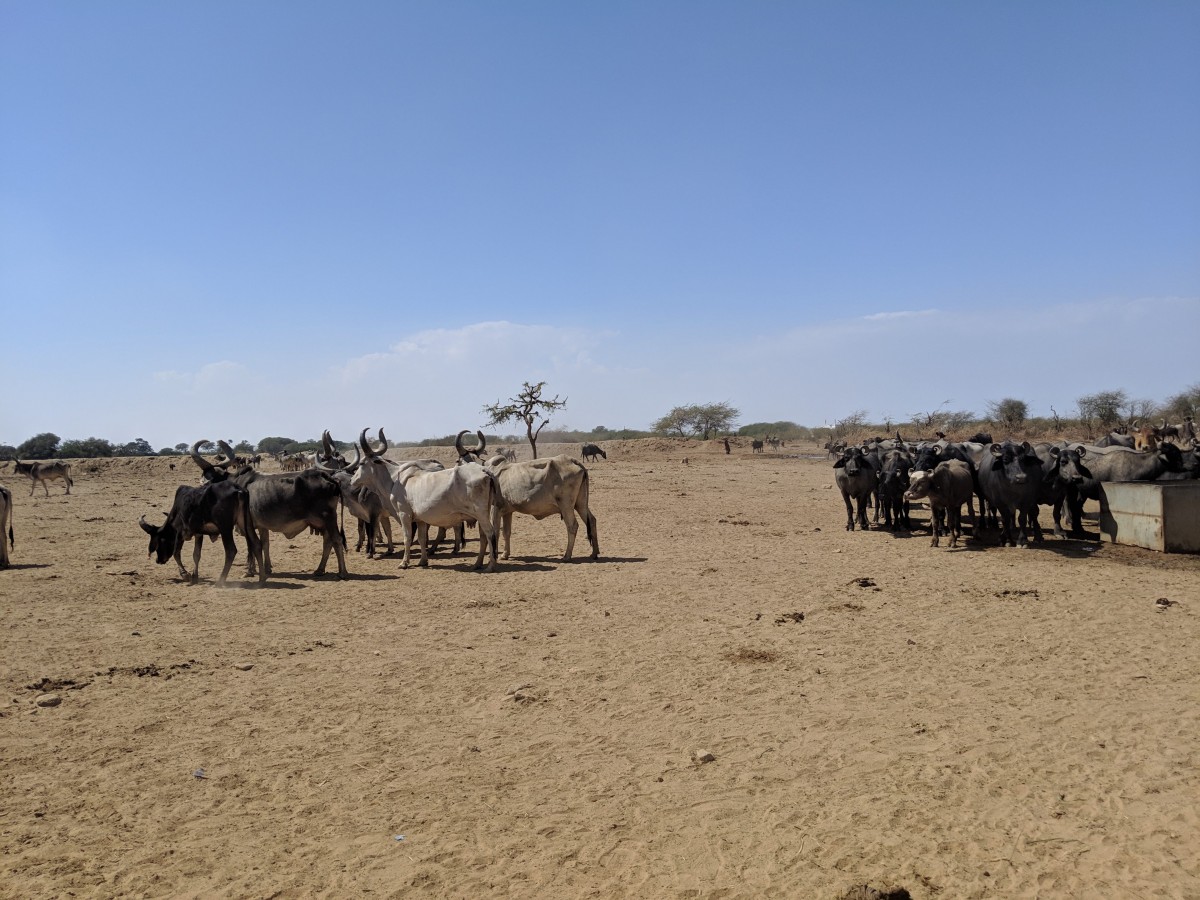 Buffaloes on a field in Mota.

The cattle camp is also not sufficient for many Maldharis like Mukim who own more than 40 cattle. “I own 60 cattle and the fodder from the cattle camp is only enough for around 25,” he said.

The government is also supplying fodder at Rs 2 per kg through trucks that ply to villages periodically. Maldharis can avail 20 kg per cattle up to a maximum of five cattle per household.

The supply, though, is erratic. “Those trucks don’t come daily. They come once or twice a week. That is not enough,” said Mukim.

The supply of water too is inconsistent. Mota does not have piped water supply and the ground water is saline, as it is located only a few kilometres from Kutch’s iconic salt marsh – The Great Rann of Kutch.

According to L.J. Fufal, superintending engineer at the Gujarat Water Supply board in Bhuj, the remoteness of places like Mota in west Kutch adds to the challenge of supplying water. “Those places are very remote. Even in areas where there is a pipeline, what happens if it breaks down? It takes time to identify and fix it, because the area is so large and remote,” he said.

According to Fufal, the district administration is supplying water through tankers. “There are 30 villages and 32 hamlets which are particularly vulnerable,” said Fufal. Mota is among those hamlets. “The tankers make in total around 100 trips in one day to supply water. We try to ensure that the remote and vulnerable villages are provided enough water.” 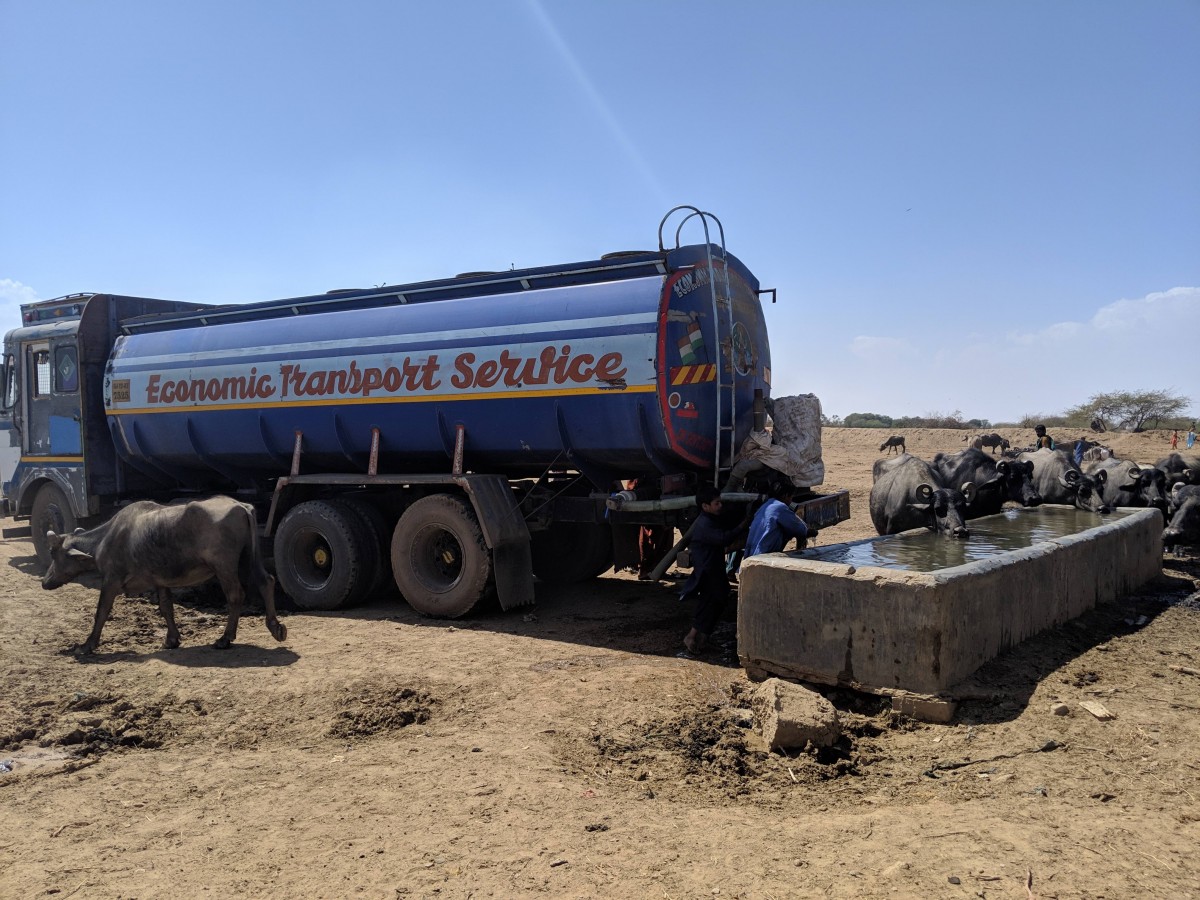 The water tanker in Mota.

The tanker that had arrived the day we visited Mota brought with it 10,000 litres of water. “That has to be used by the entire village for drinking, cooking, bathing and for the cattle,” said Ghafoor Hussain, who at 73 is the oldest person in the village.

Ten thousand litres for a village of 1,100 averages to less than 10 litres of water per person over a period of two days, and sometimes more. Residents fill water from the tanker into small blue drums that they keep ready.

According to Ghafoor, the closest Mota has come to war, in recent days, is when the water tanker arrives. “Water is limited and not enough to meet the needs of everyone in the village. Whoever reaches first gets the most water,” he said. “It’s like a war. But things don’t get hostile. After all, we survive only because we help each other.”

Sometimes, households are unable to store enough for their needs. Saheb Rehman was away at work when the tanker arrived and his wife and young children could only fill about 50 litres.

Saheb does not own any land. Prior to the current drought, he owned 10 cattle, but was forced to sell them as he couldn’t afford to feed them. Now, he works as a daily wage labourer, earning Rs 200 a day – less than the minimum wage prescribed by Gujarat by at least Rs 100 (the prescribed minimum wage varies slightly by the type of employment and category of worker).

“I was at work when the tanker came. My wife and children could only fill one drum. Now, we have only 50 litres to cook, wash and drink. And we don’t know when the tanker will come next,” Saheb said, looking despondent. 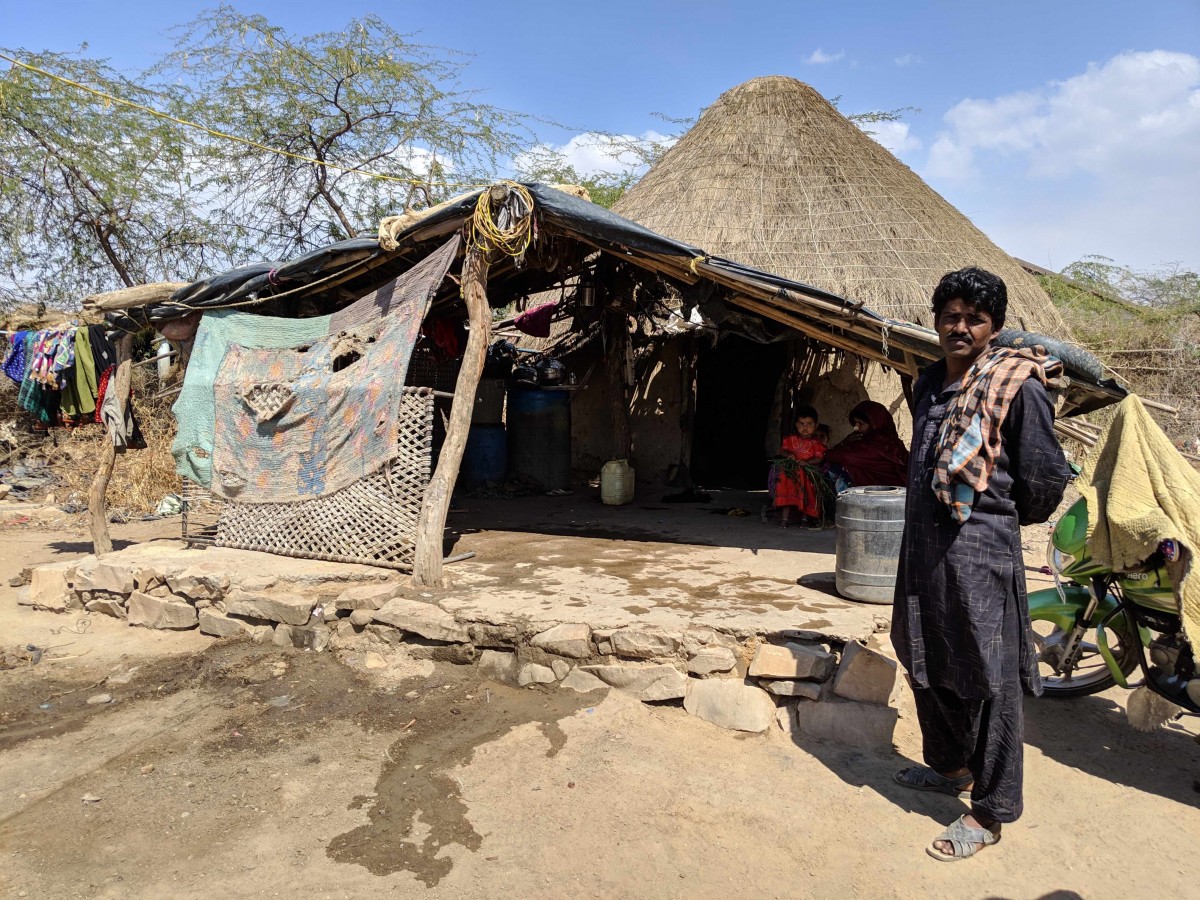 Usually, he does not go to work the day he expects the tanker to arrive. “Together we are able to fill the two drums that we have. I can carry one and my wife and children can carry one. So, I take a leave when the tanker is to arrive,” he said. This means that he foregoes the Rs 200 for the day. “And sometimes the tanker doesn’t arrive when I have taken a leave.”

As we talked, Mukim – whose family was able to fill about 200 litres that day – offered Saheb water from his drums.

Mukim, like Saheb, lives in a small one-room bhunga – a circular mud hut with thatched roofs typical of Kutch. Outside is a small courtyard covered by hay and supported by wood scaffolding. Kareema, Mukim’s wife, is cooking using firewood. They are a family of nine, with seven children. The eldest is 17 years old.

“We got married before the earthquake,” he said. The devastating earthquake of 2001 which led to the deaths of over 13,000 people is a significant marker for people in Kutch.

“I am making chapatis,” said Kareema, covering her face with a dupatta. “There are no vegetables. We eat it with chutney or salt. Or potatoes, occasionally.”

The family owns a small two-acre plot of land and grows bajra (pearl millet) and gawar (cluster bean) mainly for their own consumption. This year, there has been no crop.

“During the seventh month (July), we had sown bajra. But since there was no rain, there was no crop,” explained Mukim. 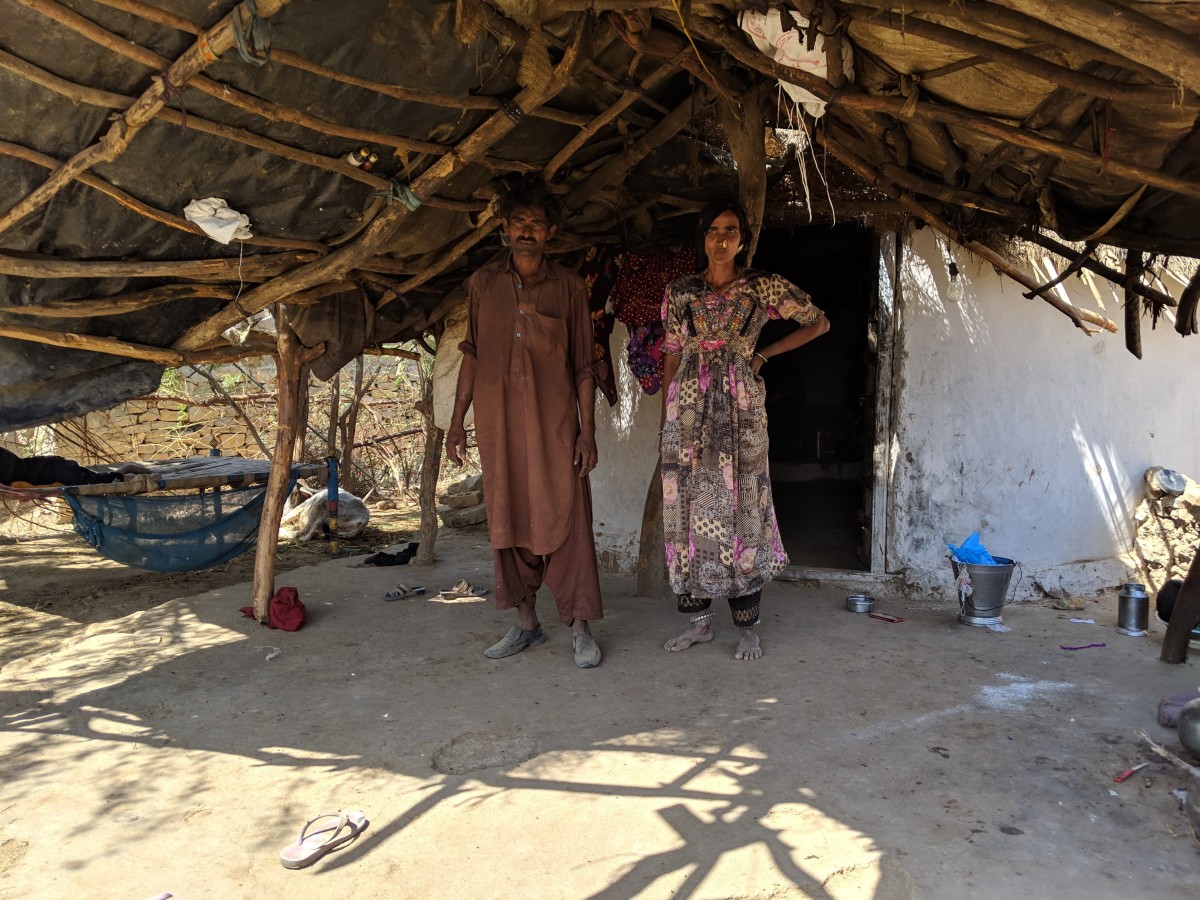 Mukim and Kareema in their bhunga.

No one in the village has received any compensation under the Pradhan Mantri Fasal Bima Yojana, which is supposed to come to the rescue of farmers in times of crop loss.

The only government assistance that residents, according to Dodiya, have received is Rs 6,800 per hectare up to a maximum of two hectares that the government of Gujarat announced in October 2018.

Kama Rabari took a loan of Rs 50,000 on his Kisan Credit Card (KCC) to sow bajra on his nine acres during the kharif season. “There was no rain. So I didn’t sow on the entire field. Still, I spent Rs 34,000 on sowing,” said Rabari.

The yield was not even enough for Rabari’s family of six. “Usually, we would keep a small proportion of the output for ourselves. This time there wasn’t even enough to do that.”

The public distribution shop located in Suigam, about eight km away, works well and has come to the aid of residents in the current drought. “Right now, we are working as daily wage labourers and using the money earned to buy ration from the ration shop,” said Rabari.