Ground Report: Why Most Kashmiri Children Are Keeping Off School

Parents spoke of how incredible the assumption that they would send young children to school in a region with heavy deployment of security forces and with mobile and internet services banned.

Five-year-old Adeem Basharat stands outside his house near Dal Lake, Srinagar. Like others of his age, Adeem remained home on Monday. Photo: Kaisar Andrabi

Srinagar: It was meant to have been a decision taken by government authorities in response to the parental concern about children missing out on their classes, and yet the reopening primary schools in the Kashmir Valley after 15 days of de facto curfew and a communications blockade has resulted in most young students staying away from educational institutions.

The announcement, a clear attempt to support the claim of normalcy in the Valley after the ending of J&K’s special constitutional status on August 5 by Union home minister Amit Shah, has done little to lower the frustration of ordinary Kashmiri who have been struggling to get information, move around and communicate under the clampdown.

On August 17, government spokesperson Rohit Kansal held a press conference in Srinagar where he said that schools of the primary level shall reopen from August 19. On the appointed day, however, students remained absent from most private schools and most remained closed. The only government schools that saw any students were the Police Public School at Bemina in Srinagar and a few Kendriya Vidyalayas. There too, it was only a handful who turned up.

On Tuesday and Wednesday, when this reporter visited several areas, the situation was no better.

Why did students not turn up? Officials said the government has made necessary arrangements for the reopening of 190 primary schools in Srinagar city. Security forces remain deployed across most of the Valley. And yet, there were no takers.

Parvaiz Ahmad Shah, a 36-year-old resident of the Gagribal area of Dal Lake in Srinagar said that when he heard the announcement of schools being reopened on a news channel, he could not believe it at first because of how “unsound and impossible” it sounded.

Talking to The Wire, Shah whose five-year-old son Adeem Basharat studies at the Tyndale Biscoe School at Lal Chowk, remarked how in the absence of means of communication parents could not be expected to send their children to school. “The biggest issue is communication. When we don’t have any idea of what is happening or the ability to receive news from school authorities, how will it be possible for us to send our children to school? This is not going to work unless they open lines of communication,” he said.

As a parent, Shah is naturally worried about his child’s safety. Pointing towards the barricades and concertina wire on the road, he said, “Do you think any parent can send his child to school in such circumstances?”

Like Shah, an overwhelming number of parents in the Valley rule out the possibility of sending their young children to school unless there is a considerable easing of restrictions.

The heavy deployment of security forces on the ground has not only kept residents suspended in a state of panic, but also left many with the distinct feeling that they have been imprisoned.

Kashmir has been under virtual siege for the past 15 days. The free movement of civilians has been curtailed, meaning that some parents have struggled to acquire baby food as well.

Showkat Ahmad Kokroo, a 38-year-old resident of the Zaaldagar area of downtown Srinagar asked how authorities could have announced the reopening of schools even though there are reports of violence every day from various parts of the city. “It appears that this move has been made just for the propaganda. It’s as if we and the bureaucrats live in different Kashmirs. This is not the first time that reality has been ignored and orders have been announced from air-conditioned rooms. They are making fools of us. They do not bother about the safety of children. They just want to show that everything is normal here,” Kokroo said. 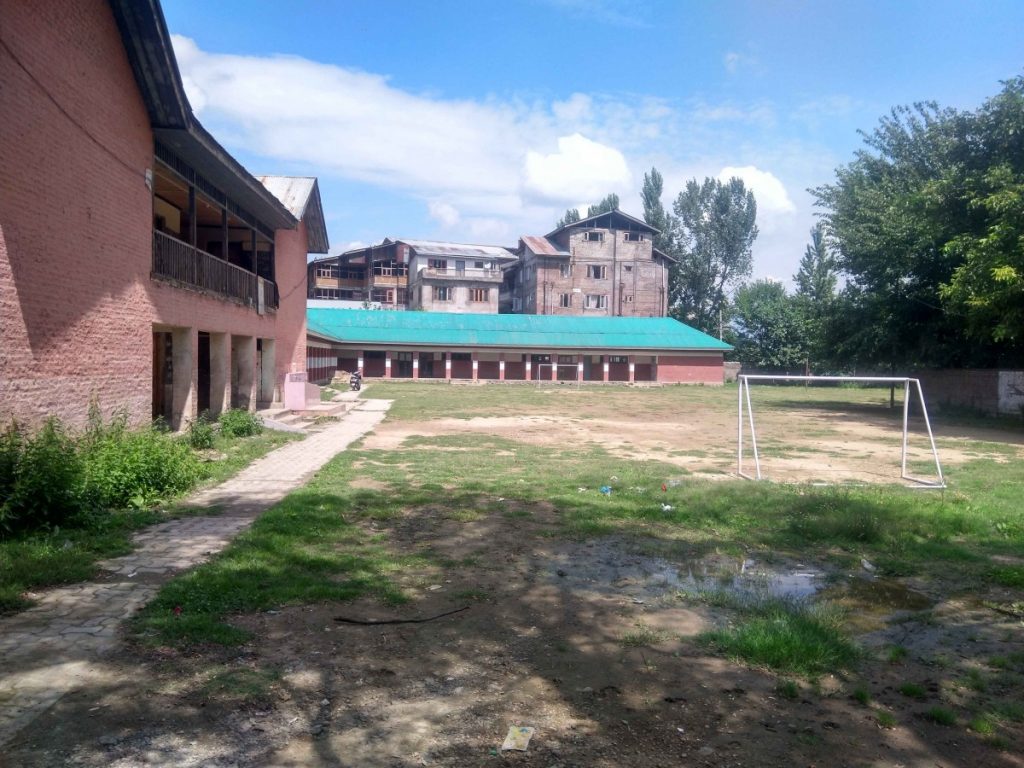 Like Shah, Kokroo also called for the reopening of communication channels before everything else.

“On normal days, schools would update us about the bus and school timings, but how can they carry out this function now?” he asked.

An announcement was made by the director of school education, Mohammad Younis Malik, on August 19, 2019, that all schools from the primary to the middle level would open from August 20. This would necessitate slightly older children being out on the streets. Kokroo highlighted the unique situation parents have been put in through this decision. “The forces raided many houses at night in the previous week and have even arrested minors, giving enough ammunition to their families to pelt them with stones. Parents are thus scared of letting their children out,” he said.

For 42-year-old Utivender Singh, who lives in the Bemina area of Srinagar and has two sons, anything is possible in Kashmir. “Inke liye humare bachche marne ke liye paida huye hai (‘For them, our children were born to be killed’). Parents cannot send their children to schools when they do not know whether they will return alive or dead,” he said.

Singh’s two sons attend Tiny Heart English School. Fourteen-year-old Amarjeet studies in Grade 8 and 11-year-old Paramjeet, in Grade 6. Both have been quite bored at home. But as a parent, Singh is resolute that their safety is his priority. 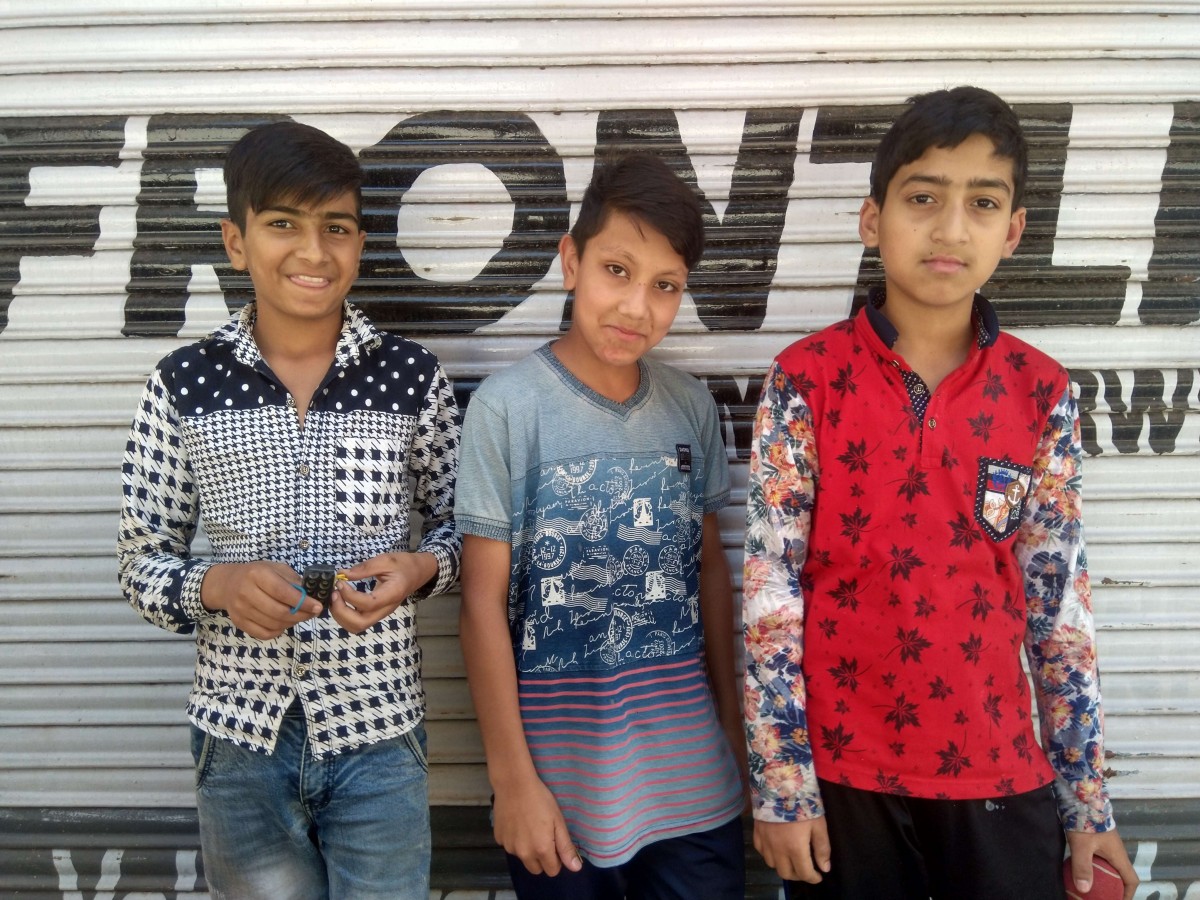 Basil Khan and his friends Tasseef and Nadeem in the Court Road area of Srinagar. In the absence of school, the three played cricket. Photo: Kaisar Andrabi

What of the teachers?

Meanwhile, the director of education on Monday in a press conference said out of the 190 primary schools which were supposed to open on the day in Srinagar, 30-40% staff were present in 166 schools. He noted that attendance in all these schools were thin.

Manzoor Ahmad, who teaches a the Government Girls High School at Drugjan area in Srinagar’s Sonwar, said he could manage to reach the school possibly because he was a government employee but admitted that there was “zero scope” of children making their way to the school too.

Sitting in the staffroom, Ahmad said only seven of the 30-member staff force could make their way to Sonwar. “We have staff members from different districts, and due to strict restrictions it has not been possible for them to reach. Who will put his or her life at risk?” he asked, adding that fear is the biggest reason why students and teachers would be likely to keep away from schools.

Also read | #RightSideUp: A Kashmir State of Mind; An ‘MRI Report’ for the Ages

Another teacher said the experience of going to school left him quite scared. “There can be an attack or harassment by anyone. If the situation remains the same in the coming days, I will not go to school and face whatever action the government takes,” he said, requesting anonymity.

Students, in the meantime, have had to be content playing cricket in their courtyards.

“There are protests and clashes going on every day. I get scared when I see forces with guns and batons on the road,” said Basil Khan, a student of Tyndale Biscoe School, outside his house in Court Road, Srinagar.

Then, he smiled and added, “School days are the best. But what to do?”