The police's strict implementation of the Centre’s March 29 decision to seal all inter-state and district borders has left many among those walking hundreds of kilometres home in a lurch. 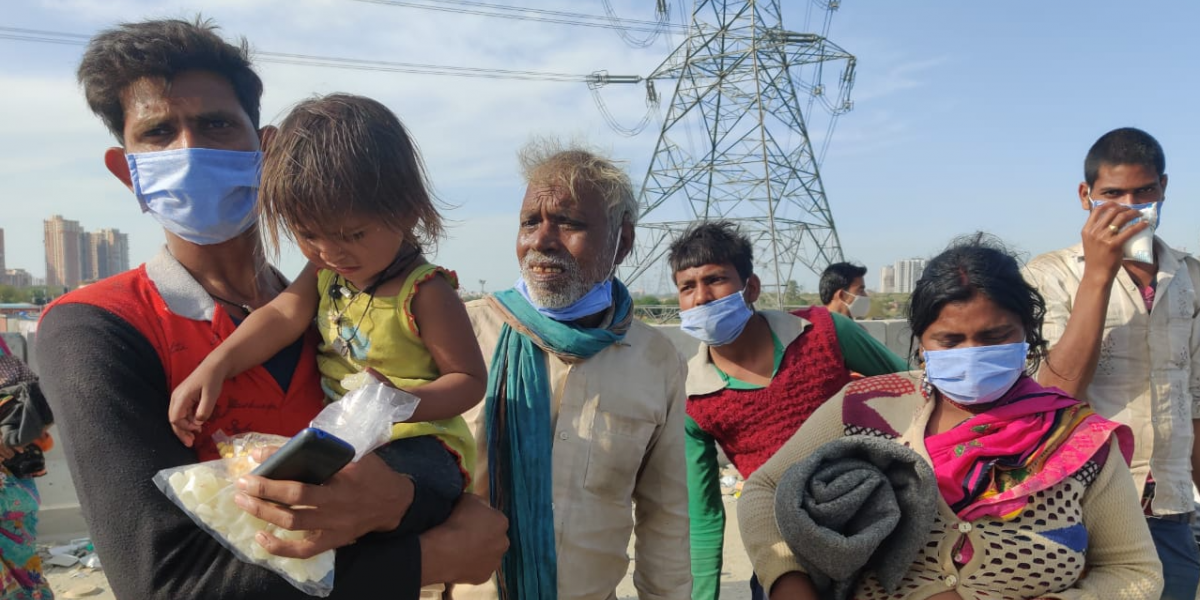 A family of a migrant labourer on the Meerut highway. Photo: Sangeeta Barooah Pisharoty

Ghaziabad: The Uttar Pradesh government’s decision on March 29 to scrap the emergency bus service – launched to address the issue of distraught migrant labourers walking hundreds of kilometres home from the National Capital Region (NCR) due to the 21-day lockdown – has once again forced many poor people from the state to resume walking.

What has additionally left many in a helpless situation is the police’s strict implementation of the Centre’s March 29 decision to seal all inter-state and district borders without ensuring adequate arrangements for shelter.

On March 30, many migrant labourers and their family members – several of them carrying babies and small children on their arms – could be seen walking on the Delhi-Meerut Expressway and GT Road in the Ghaziabad district of Uttar Pradesh. Some labourers that The Wire spoke to said that the police chased them away towards Delhi, asking them to return to “where they came from”. After walking for five days from Rewari in Haryana to their village in UP’s Sitapur district, a daily wage earner, his wife and two children were chased away towards New Delhi by the police. Photo: Ismat Ara

One such person was a daily wage earner from UP’s Sitapur district, who identified himself as Babloo. He told The Wire that he worked in Rewari, Haryana, and had walked about 100 km to reach Ghaziabad on March 30 only to be chased away by the police towards Delhi.

“I had to leave Rewari because my landlord asked me to vacate the room. He said he wouldn’t know where all I went and feared that I would bring coronavirus to his house,” he said.

Babloo was accompanied by a group of migrant labourers, their wives, children and old parents – all from Sitapur district. The whole group has been chased away by the police towards Delhi.

“Food is not a problem, so far. People are good, giving us something or the other to eat on the way. But it is the police who are beating us, scaring us away. Tell me, where will we go? If we had a place to stay, food to eat, why would we be roaming around for five days in a row like this? Some of us don’t even have sandals to wear, we have sores on our feet, we can barely walk anymore,” said a woman from the group. 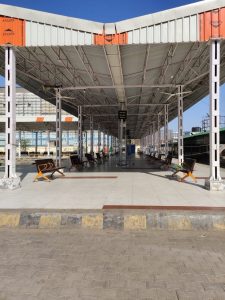 Another woman broke down. “Yesterday, when we reached the Anand Vihar bus station after walking all the way from Rewari, we were chased away by police. Idhar se udhar daura raha hain bas. Koi jankari nehi de rahe hain (they are just making us run here and there and not giving us any information),” she said.

Her husband added, “Even if we walk back to the Delhi border, who knows, we will not be allowed in by Delhi Police, may be. Someone has just told us that there is a temple nearby – we are going there now to see if we can take rest there tonight. We have little children.”

On March 30, the Anand Vihar station, Kaushambi bus station and the Lal Kuan bus stand, along the UP-Delhi border, wore a deserted look with police manning the gates, strictly restricting any members of the public from entering the premises.

“You can say there were about 10,000 people here last evening. We have cleared them away today, and have barricaded the entry and exit points,” said a UP policeman. The road along the bus station, which marks the physical border between Delhi and UP, is being jointly manned by the UP and Delhi Police personnel.

“Most of us have been working at least 14 hours at a stretch since the lockdown,” said a Delhi Police personnel.

Outside the barricade stood a woman, eight months pregnant, along with three of her children. “My husband is in Lucknow. We came to visit our sister-in-law in Ghaziabad. On getting to know that buses were plying, we decided to come to the Kaushambi station last night to board the bus, but service had been stopped by then,” she said. 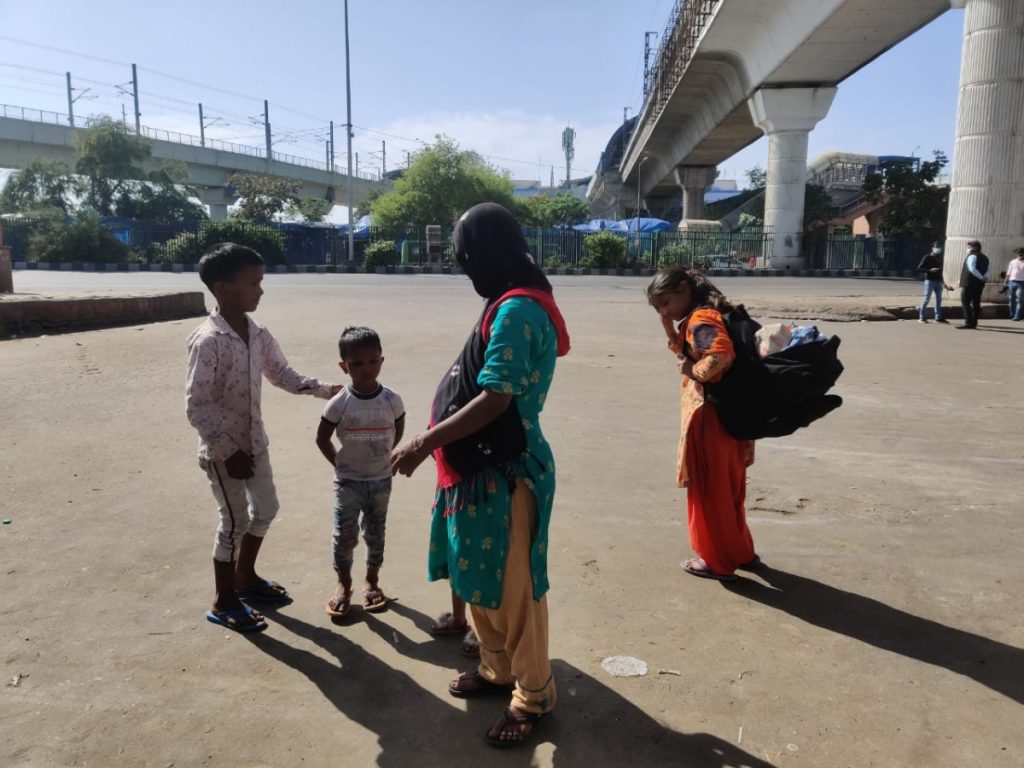 A pregnant woman with her four children outside the Kaushambi bus station. She has no means to go back to her husband in Lucknow. Photo: Sangeeta Barooah Pisharoty

“Now we don’t even know how to get back to my sister-in-law’s house. She is not picking up the phone and there is no vehicle to take us back to Ghaziabad town. I am eight months pregnant, can’t walk so much. I am already exhausted,” she said.

Near the Lal Kuan bus stand too, there is a massive police bandobast, complete with a shamiana erected for policemen to sit and keep a close watch on the highway to Hapur. A policeman posted there told The Wire that the people waiting for buses were cleared in the morning. “Nobody is being allowed to stand here. There are strict orders. We have also made some arrangements from our side to take some helpless people to a rest house and a marriage hall in Arthala. Some arrangement has been made there for their food too. We are also trying to help people by putting some of them in trucks carrying essential goods from Delhi and Ghaziabad into other parts of UP,” he said. 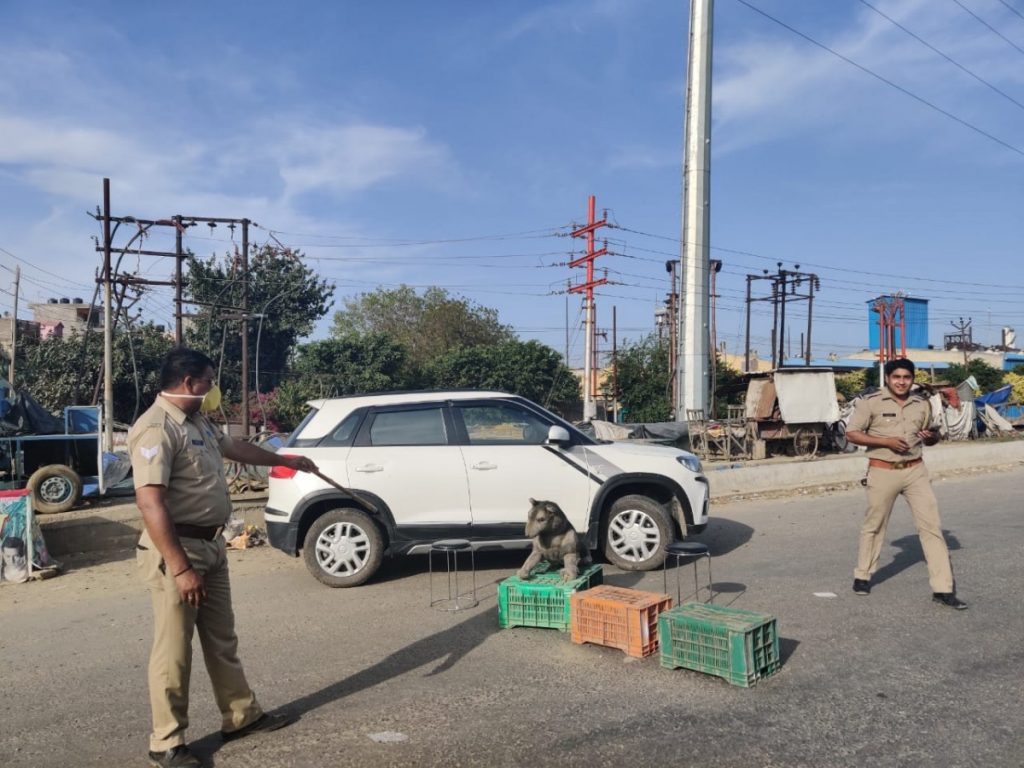 Due to a shortage of barricades, some policemen on NH 24 have put baskets borrowed from nearby shops on the road. They have also kept a stuffed dog to scare away people. Photo: Sangeeta Barooah Pisharoty

Many migrant labourers were found walking on the railway tracks in Ghaziabad district to avoid police action. “I have been walking from the Shahdara area in Delhi, for Farukhabad. We started only this morning, it will take us at least three days to reach home,” said a labourer. He works in a shoe factory in Shahdara , and decided to walk all the way home because “the Delhi government has not been able to provide us food as promised”.

“Our landlord has not asked us to leave but the problem is the massive hike in the prices of essentials. The Delhi government said we should dial 100 if someone is hiking prices of food etc – we tried doing it a couple of times, but got no result. I also went to one such place where the Delhi government had arranged for food, but it was over by 7 am. So the elders in the family told us to return home,” he said.

Another person walking on the railway tracks while holding a baby said, “The Delhi government arrangement is only for the homeless. We have a place to stay but the problem is a lack of earnings to sustain us for three weeks. The shop I work at is closed. I have a small baby with me, her mother has already reached home. I need ‘tin milk’ to feed the baby and it is costly.”

A woman walking home with her 10-year-old son vented her anger at Prime Minister Narendra Modi for announcing the lockdown and UP chief minister Adityanath for scrapping the bus service.

“When Modiji announced the Janata curfew, we thought it was only for a day but next thing we know there is three weeks bandh. We didn’t get any time to prepare for it. We could have gone home. Half my children are back in the village with their father while I and my youngest son are far away from them in a rented house in Delhi with not much money to sustain ourselves. I want to ask both Yogiji and Modiji, are we mad to walk like this on the railway track for hundreds of kilometres without any valid reason? Why are they putting us through this?”

While many people are still attempting to reach their homes by walking, some migrant labourers employed in building construction sites in the Sahibabad Industrial Area that The Wire visited said they have decided to stay put. “We too thought of going home but looking at the way the police have been beating people on the streets, we decided to stay on. Every year, around this time, we return home because it is time to harvest the wheat,” said a labourer.

He said, “Our thekedar (contractor) is a good person; he is also from Jhansi like us. He is feeding 25 of us. But let’s see for how long he continues to do so. Else, we too would have to take the long road home.”