Ground Report: Taken From Bengaluru to Kolkata, 59 ‘Bangladeshis’ Wait to Be ‘Pushed Back’

No due legal process has been followed, and the detainees – some of them separated from their families – are unsure of how long they will be detained or how they will be sent back to Bangladesh. 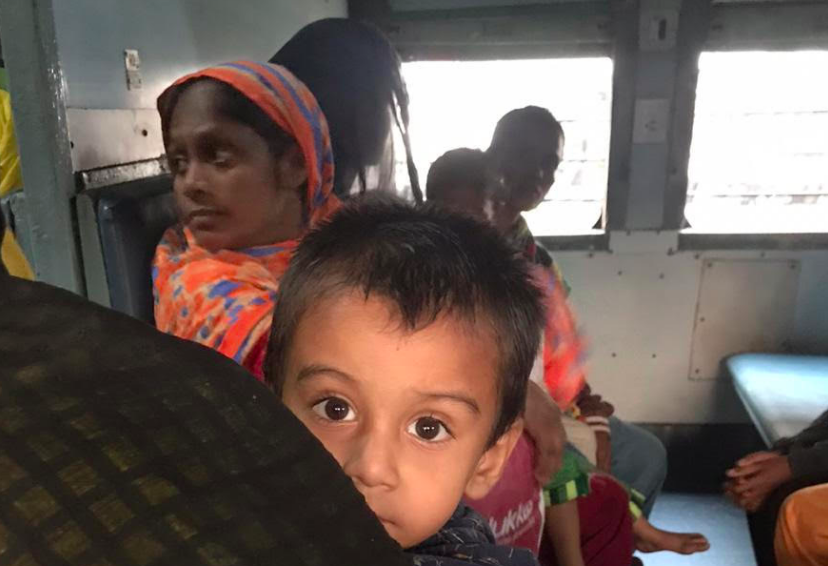 Kolkata: As many as 59 migrant labourers, identified as undocumented Bangladeshis and picked up from Bengaluru, were detained for 26 days in Karnataka, thereafter put in a train to Howrah by the state police, and handed over to the West Bengal police. The Karnataka government, in coordination with the Union home ministry and Border Security Force (BSF), reportedly wants them pushed across the border to Bangladesh. They have even accused the Bengal government of not cooperating.

Meanwhile, there have been reports in the Dhaka-based newspaper The Daily Star about groups of people claiming to be Bangladeshi citizens, who have said that they were picked up by Karnataka police and pushed from across the Indian border by the BSF.

This correspondent met the migrant labourers when they arrived at the Howrah Station by the Sri Sathya Sai Prashanthi Nilayam Express on November 23. That these men, women and children were in a precarious position was clear from what they had to say.

“I was woken up at 6 am by the police (Karnataka police). They asked me to step out and follow them to the police station, and promised that I would return home within 30 minutes after my photo was clicked,” 27-year-old Rabia, told The Wire. Rabia had been working as a domestic worker in Bangalore for the last three years.

Bundling her four-year-old daughter, Rabia obeyed the police order but was not allowed to leave its custody. After 26 days in detention at a women’s shelter in Bangalore, followed by the train journey with 58 others, she reached the Howrah Station near Kolkata on November 23 afternoon. Rabia said her husband was in Bangladesh when the police operation took place. She said he had gone to attend his mother’s funeral. “I don’t think he knows what has happened (to her and her daughter),” she related. Thirteen-year-old Arif was unsure if he should share details of what they were told by the Bangalore police. “They told us to go with them and that we would have to go to Bangladesh,” said Arif. With him was his father, Sarowar. “We don’t know why we have been brought here,” Sarowar added.

Also in the group were Mohammad Zakaria, his wife Champa and their one-year-old son, Rubul. Zakaria and many others in the group said that police had asked them to bring proof of their Bangladeshi citizenship. “We were told that we would be allowed to leave once the IDs arrive.” Some of those detained arranged for their Bangladeshi identity cards to be sent via WhatsApp to a police officer’s number.

“We were only told that we don’t have to worry and we will be sent back to Bangladesh. They asked us to provide them with all our Bangladeshi documents,” said 62-year-old Mumtaz Begum, who has been working in Bangalore for the last seven years.

For Rabia’s co-travellers, the story of how they arrived in West Bengal was similar to hers. A large majority of them earn a living as manual scavengers in Bangalore. Some of them have been working as domestic workers in different parts of the city. 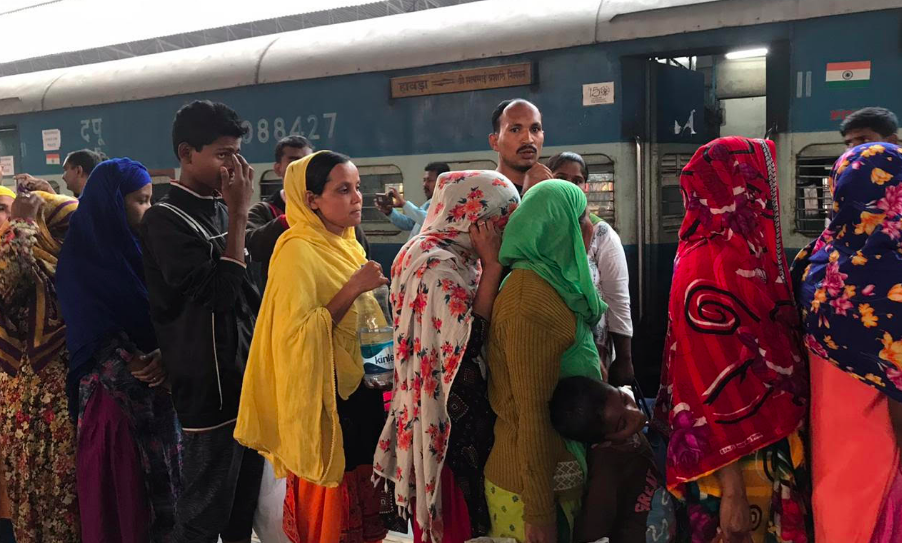 All of them said they were picked up in a swift early morning operation across different parts of the city and detained by the Bangalore police. While 28 of them were picked up by the Marathahalli police, 31 of them by the Ramamurthy Nagar police. They said they were “watched” by the Bangalore police throughout the journey, so that they wouldn’t escape from the train.

The Bangalore police have claimed in an FIR, which The Wire has seen, that all 59 people in the group are victims of trafficking – and that they crossed the border from Bangladesh by paying traffickers.

“It’s a known route of reaching India by paying dalals. We came here in search of better work opportunities. We would collect waste and sort it,” said Mohammad Farazi, who said he reached Bangalore just a few weeks before he was detained.

Maryam Begum, who had been in Bangalore for the last three years with her daughter, was desperate to get out of detention. “I told them I came without a passport and that’s my fault. I want to go back to Bangladesh,” she said.

Many in the group got separated from their family members – their children, husbands or wives – when the police picked them up. They were still in hiding, while the detained group was helplessly in police custody. 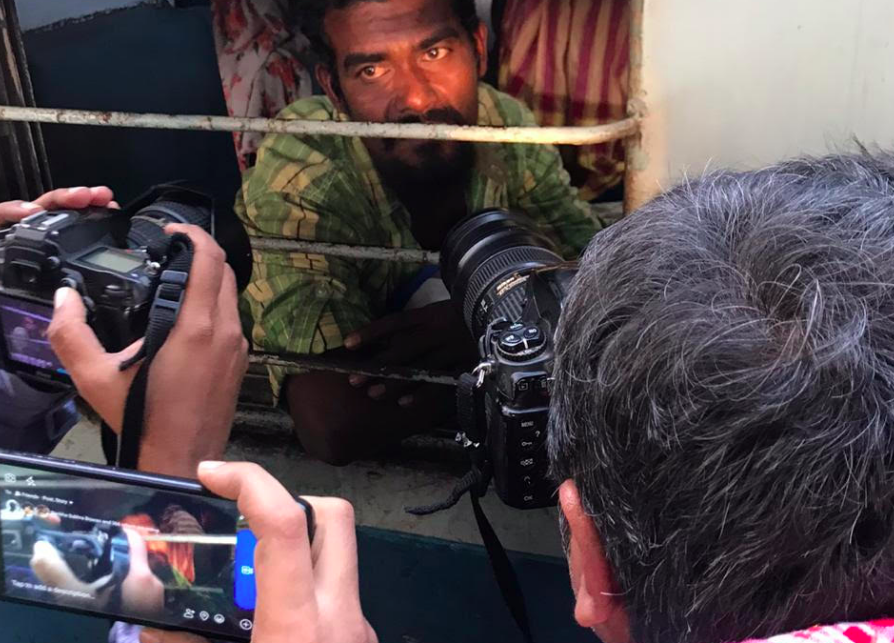 The group which arrived by train included 25 women and 14 children. On arrival at Howrah, they were kept in shelters provided by Bengal police. Speculation has since been that they would be handed over to the BSF who, in turn, would push them back into Bangladesh. When contacted, the Border Guard Bangladesh said they had no knowledge of a handover and had not received any communication about such a plan.

Human rights activists from the Association of Protection for Democratic Rights (APDR) who were present when the train arrived at the Howrah Station, opposed the government’s alleged plan to push them into Bangladesh. They maintained that they were targeted and picked up only because they were Bengalis. Due process hasn’t been followed, the activists said in a note to the police. They said they should instead have been first prosecuted under the Foreigners Act, 1946.

“It is absolutely illegal, not in compliance with any law and absolutely inhuman. It should have been properly identified which country they belong to and then of course the legal process has to be undertaken. They should have followed a process of deporting illegal immigrants. There is a law for that. You cannot just pick up people, and bring them in a closed compartment, put them in a van and then you take them to the border and push them into Bangladesh,” Nisha Biswas of APDR told The Wire.

The arrests appeared to be an extension of the fevered campaign across India, led by the union home minister Amit Shah himself, to capture “illegal immigrants” from Bangladesh. However, the exercise seemed to have left this lot trapped between the government, which is trying to push them into Bangladesh, and the Border Guard Bangladesh, which, if we go by the news reports from Dhaka, has no intention of taking them back in without proper documents.

While there have been reports that some apartments in the IT city have started a quiz for Bengali-speaking domestic workers, to spot the difference in dialects, both Rabia and Mumtaz, who worked as domestics, were unaware of it. Those with a distinct East Bengali accent would be marked as “Bangladeshis”. The implicit assumption is that they are “illegal immigrants” and should, therefore, be evicted.

Aside from this police crackdown on Bengali-speaking migrant labourers in Bangalore, the state government is also constructing a detention centre to house those foreigners found staying in the state without documents.

There has also been an announcement of an introduction of a nationwide National Register of Citizens (NRC) to create a ‘legal list’ of Indian citizens. Till date, the NRC exercise has been carried out only in Assam. A total of 1.9 million people have been left out the list and there is no clarity on what awaits them if they fail to prove their citizenship at the Foreigners’ Tribunals. Between 1985 and June 30, 2019, only 29,855 “foreigners” have been “expelled” from Assam. This expulsion included what is known as “push back”: a unilateral expulsion of people alleged to be Bangladeshis into Bangladesh. Bangladesh described such “push backs” as “unilateral, illegal and unfortunate”, and that the process had to be replaced by deportation.

Deportation is a lengthy process and involves the Ministry of Home Affairs as well as the Ministry of External Affairs. The minister of state for home affairs Kiren Rijiju had said in the Lok Sabha last year that in 2016 and 2017, only 39 Bangladeshi nationals were deported from detention camps of Assam. Bangladesh has also stated that it will not accept any deportation because of the NRC.

But back to the case at hand – this is not the first time that a train full of undocumented immigrants has been sent to Bengal. In 1998, the BJP-Shiv Sena government in Maharashtra had picked up 34 Bengali-speaking Muslim workers from Mumbai to “send back” back to Bangladesh. The Jyoti Basu government had taken exception to that arbitrary step, and even moved the court.

In 2011, while crossing the Indo-Bangladesh border into Bangladesh, 15-year-old Felani Khatun was allegedly shot dead by a BSF personnel. Her body was seen hanging from the border fence, for hours before the BGB brought it down. In 2019, it seems inspite of the dominant anti-immigrant narrative across India, people still take the risk to cross the border — in the hope of better life.

Arijit Sen is an independent journalist.