A letter from the environment ministry to state governments undermined the gram sabhas of Adivasis and forest-dwellers with regard to forest clearance proposals. 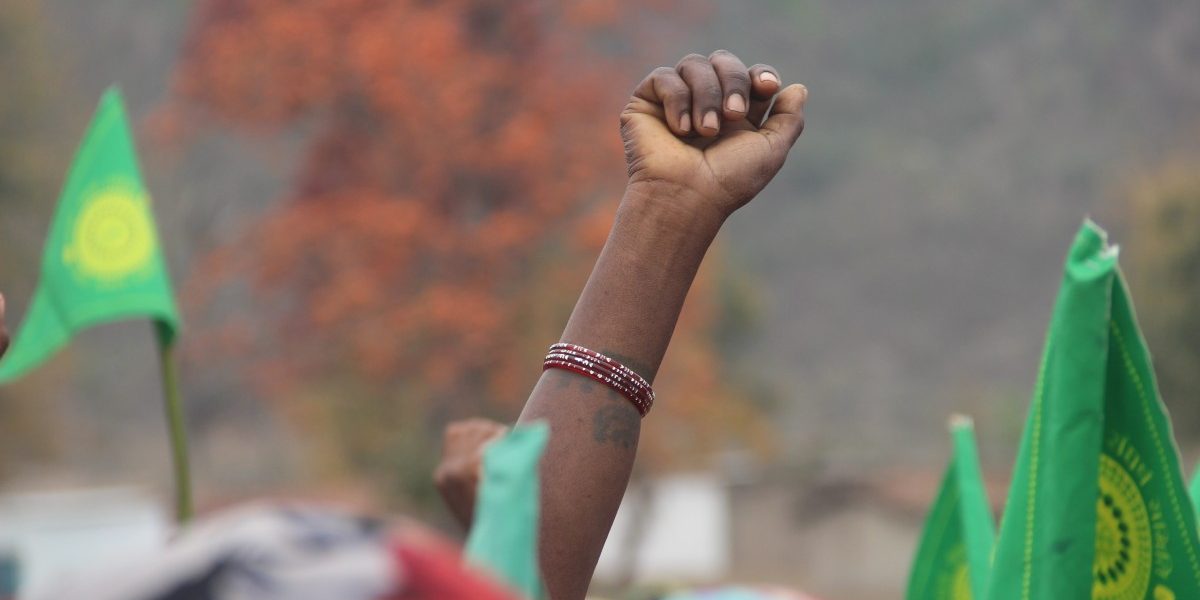 A Gond Adivasi woman raises her hand at a May 2015 gram sabha meeting in Amelilya village of Singrauli, Uttar Pradesh to oppose forest diversion for a coal mine. Credit: Chitrangada Choudhury

New Delhi: In a strongly worded letter, the Ministry of Tribal Affairs (MoTA) has asked the Ministry of Environment, Forests and Climate Change (MoEFCC) to “modify” a letter which it issued to all state governments in February.

The MoEFCC letter effectively undermines the powers of gram sabhas of Adivasis and forest dwellers, provided under the Forest Rights Act, 2006, with regard to forest clearance proposals. An estimated 275 million Indians live in and around forests, and are dependent on forest resources for their livelihood.

On February 26, the MoEFCC wrote to all state governments, stating that compliance with the Forest Rights Act was not required for getting Stage-1 or ‘in-principle’ forest clearances. It said such compliance could be carried out in the time period provided for meeting the conditions required to secure the final clearance.

This effectively meant that details of such proposals no longer needed to be placed before the relevant gram sabhas for awarding or withholding their consent. Such gram sabha powers emanate from the Forest Rights Act, and were actualised by a 2009 circular of the Environment Ministry, and reiterated by subsequent guidelines of the Tribal Affairs Ministry.

The MoTA letter, also marked to all state governments, opposes the MoEFCC’s move, saying that neglecting compliance with the Forest Rights Act before granting stage-1 forest clearances will make forest clearances “a fait accompli (for Adivasis and forestdwellers) as by that time the project proponents would have made sufficient progress and the tribals living in the forest areas earmarked for use by projects would be put to a great disadvantage”.

In a strong letter the Tribal Affairs Ministry asks the Env Ministry to alter its Feb 26 order that diluted gram sabha powers making forest diversion a fait accompli for Adivasis & forestdwellers. Letter points out: violation of the #ForestRightsAct is a punishable offence! pic.twitter.com/2PIwNY5gPn

The MoEFCC currently awards forest clearances under the Forest Conservation Act – over 1.5 million hectares of forests have been cleared since the law came into force in 1980. The FRA was enacted in 2006 to recognise the pre-existing rights of India’s forest communities. Recognising these communities as “integral to the survival and sustainability of forest ecosystems,” the FRA gives their gram sabhas, “the responsibility and authority for sustainable use, conservation of biodiversity and maintenance of ecological balance.” The 2009 regulation actualised these powers, and created for the first time a space for forest communities to participate in decision-making around forest clearance proposals.

However, this devolution of power to village assemblies has met with stiff resistance from the forest bureaucracy, as well as from industry seeking possession of lucrative forest lands. It has also sparked a running feud between the MoEFCC and MoTA on the issue of forest diversions and rights of forest-dwellers. This, even as large-scale diversions of forest over thousands of hectares have sparked protests on the ground, as well as complaints of gram sabha violations. The MoEFCC’s February 26 move and the MoTA rejoinder on April 5 mark the latest chapter in this tug of war.

The MoTA’s letter points out that its views on the importance of FRA compliance for the consideration of in-principle clearances was already communicated to the MoEFCC in a joint meeting of senior officials in January 2018, and had been mutually agreed upon by both ministries.

Villagers in Hasdeo Arand, Chhattisgarh at a March 2019 march against gram sabha forgery and forest diversion for a coal mine. Credit: Alok Shukla

Ironically, while the MoEFCC sent its February letter to all state governments, and marked it to a range of government ministries, as well as the Prime Minister’s Office, it did not send it to the MoTA, which is the nodal ministry for the Forest Rights Act.

The MoTA rejoinder points out this anomaly too, saying “even if the MoEFCC does not insist on compliance to (sic) FRA, it cannot be said that this authorises them to violate FRA.” The MoTA letter goes so far as to point out that the violation of the Forest Rights Act is a punishable offence.

Dr Abhay Xaxa, a sociologist and convenor of the National Coalition for Adivasi Justice, told The Wire, “Land grabbers see the powers of gram sabhas as a spoiler to their designs and have continuously tried to curtail its mandate, and the MoEFCC directive tried to do this too.” He added, “It is necessary to remind the government that gram sabhas are the firewalls to Adivasi rights over natural resources. They hold the key to resource justice in the country.”

Also read | Eviction of Tribals: Forced Displacement and Its Links With Poor Health

On April 10, former bureaucrat E.A.S. Sarma also wrote to the environment and tribal affairs ministers, Harsh Vardhan and Jual Oram respectively, asking them to uphold the sovereignty of gram sabhas under the Forest Rights Act. Sarma had moved the Andhra Pradesh high court successfully to strike down an earlier circular by the MoEFCC, stating that gram sabha consent was not necessary if forest land was being diverted for ‘linear projects’ such as roads and transmission lines.

Meenal Tatpati, from the environmental protection group Kalpavriksh, was also among those who wrote to Harsh Vardhan protesting his ministry’s move. She received no response.

“The constant attempts by the MoEFCC to dilute the free prior informed consent of gram sabhas to forest diversion are unfortunate,” she told The Wire, adding that the latest MoTA pushback was a welcome move. “The circular in question was even more surprising because it actually went against the amended FCA rules, which specifically ask the collector to seek free prior informed consent of Gram Sabhas, at the time the entire proposal for forest diversion is being put together.”

Tatpati added, “Seeking the consent of the gram sabhas and recording their rights over the forestland before it is diverted should be the basis on which forests clearances are awarded in any democratic country.”

Chitrangada Choudhury is an Odisha-based multimedia journalist and researcher. She can be reached via email on suarukh@gmail.com