Six years after the murder of Nido Tania, recommendations made by the M.P. Bezbaruah Committee remain on paper. 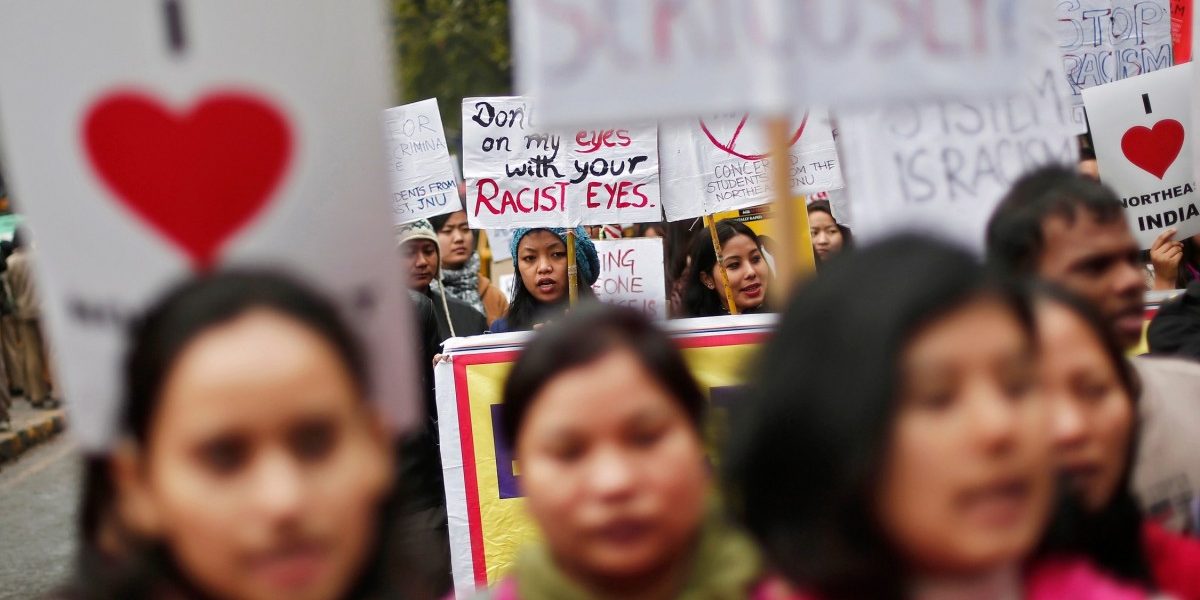 A protest by people from the Northeast. Representative image. Photo: Reuters/Adnan Abidi

Since the outbreak of the coronavirus in India, incidents of hatred towards people from Northeast India have again come under the spotlight. Many cases of people from the Northeast being called ‘Coronavirus’ were reported from the National Capital, Pune and other parts of the country. This is indeed a sorry state of affairs where despite using many soft and persuasive techniques, such incidents keep repeating.

Since the Nido Tania incident (2014), a slight tinge of satisfaction still prevails that print and digital media did their bit to sensitise people regarding the issues related to their fellow citizens from the Northeast. But amongst all the other stakeholders of society, the government has done the least to address the challenges related to racial violence/comments on people from this part of the country. Currently, the police file an FIR under Section 509 of the Indian Penal Code (IPC) if any derogatory remarks are passed against a woman from the Northeast, which is no different from the pre-2014 situation.

More shockingly, many police officers do not know proper knowledge about the appropriate section under which an offence can be registered if a male person from the Northeast is racially abused. Hardly any cases are filed under the relevant sections of the Scheduled Castes and Tribes (Prevention of Atrocities) Act, 1989, Protection of Civil Rights Act, 1955. This shows a complete lack of sensitisation amongst the police personnel. However, in this scenario, the police are not the only ones to be blamed. Lawmakers are equally responsible for abeyance in the legal framework.

The M.P. Bezbaruah Committee, which was set up in 2014 after the murder of Nido Tania, recommended three legal ways to deal with attacks on people from the Northeast and to create deterrence. Firstly, it recommended an amendment in the IPC and insertion of Section 153C and 509A, which specifically deal with comments, gestures and acts intended to insult a member of a particular racial group. It aims to make the offences ‘gender-neutral’, ‘cognizable’ and ‘non-bailable’ with imprisonment extendable up to three years or five years with fine, respectively.

Also Read: ‘We Are Not Corona’: Northeast Students Make Posters Against Racial Abuse

Secondly, the committee also recommended enactment of new anti-racial legislation for the whole country, as directed by the Delhi high court, which should have certain specific provision such as investigation of the FIR and the same should be compulsorily completed within a period of 60 days by a special squad not below the rank of deputy SP/ACP, and also special prosecutors should be appointed and trial should be completed in 90 days.

Thirdly, the committee recommended strengthening and sensitising law enforcement agencies. It recommended the creation of a comprehensive and computerised database of people from the Northeast working and residing in various metros and establishing ‘North East police units’ solely dedicated for cases related to offences against people from the Northeast. At present, there are many Special Police Units (SPU) working in various metros but it has hardly made much difference because people from Northeast do not feel encouraged to approach the police station as they fear harassment by the police, thereby defeating the purpose of the creation of the units.

These were the three major steps suggested by the committee to overhaul the legal framework connected to racial violence. The Delhi HC also directed the government to amend laws in consonance with the recommendation. But the recommendations have only gathered dust in government offices, failing to see the light of the day. It is not only our moral responsibility to ensure a safe and secure environment for our citizens but a fundamental right enshrined in the Constitution. Article 15 prohibits discrimination on the grounds of religion, race, caste, sex or place of birth. Along with this, as a part of the fundamental duty under Article 51A(e) it is the duty of every citizen to promote the spirit of brotherhood, harmony amongst different regional diversities of the country.

Further, India has also ratified the International Convention on the Elimination of All Forms of Racial Discrimination (CERD) in 1968. India is duty-bound to enforce the obligation under the treaty. Today, we have multiple legislations to address discrimination based on caste, religion or sex, but racial discrimination or regional discrimination has never been given due importance. Until we enact an enabling legislation, equal and non-discriminatory society and will remain a utopian dream.

Also Read: Of COVID-19, Double Identities and the Alienation of Northeast Indians

Some may argue that laws will not bring an end to regional and racial violence. They may say that a feeling of ‘brotherhood and harmony’ can bring tranquillity. While this may be true, we cannot sit idle and wait for a gradual change in the mindset of society. We have followed the carrot approach for a long time and it is time that we now combine both the carrot with the stick, to ensure that the attitude of the mass changes quicker.

It is high time now that we do brush the problem under the carpet and acknowledge the problems faced by the people from Northeast India. As the Roman philosopher Marcus Cicero said, “The safety of the people shall be the highest law.”

Sukanya Singha is an assistant professor in the Faculty of Law, University of Delhi.