Gitashri Tamuly speaks to The Wire about the need to balance her personal and professional lives and the NIA's raid on their house. 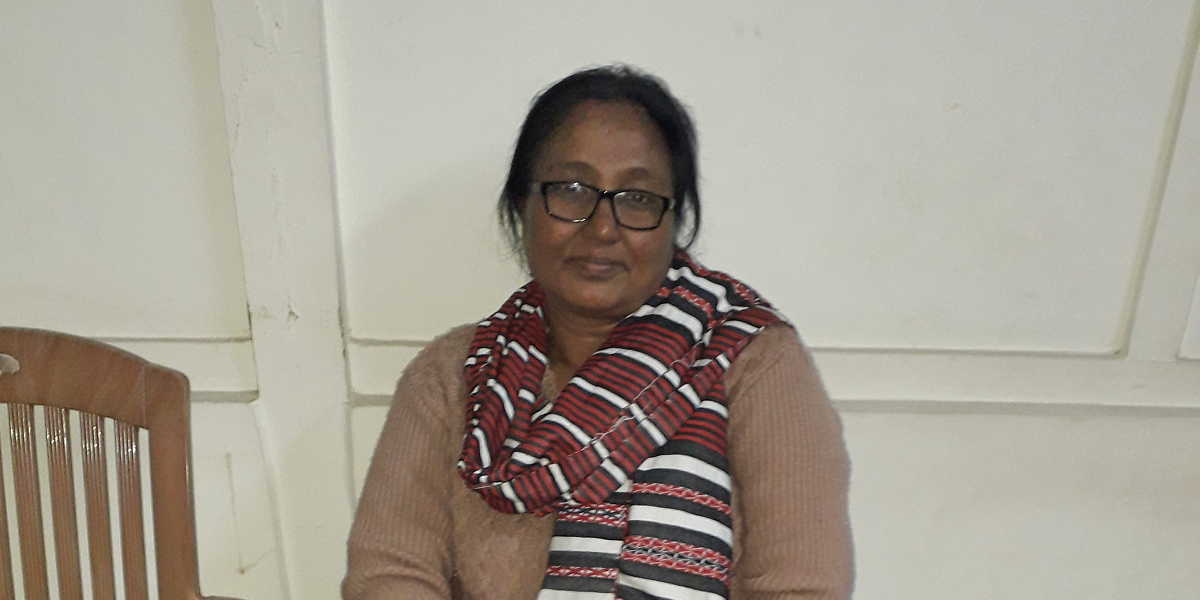 Guwahati: On December 14, RTI activist and peasant leader from Assam Akhil Gogoi made the headlines when he was booked by the National Investigation Agency (NIA) under the amended Unlawful Activities (Prevention) Act UAPA for ‘waging war against the nation’ and accused of being a ‘Maoist’. Gogoi, as the leader of the Krishak Mukti Sangram Samiti (KMSS), was at the forefront of the anti-Citizenship (Amendment) Act (CAA) protests in Assam. He was perhaps the first person in the state to be arrested under the amended Act.

For his wife Gitashree Tamuly, an associate professor at a local college, it was another day where she had to “balance out” her personal and professional life. She had to check the examination papers of her students and also figure out where her husband was, in the absence of information from the authorities. Her husband’s arrest seemed “somewhat different” to her from the previous attempts to clamp down on his activism, be it under the Congress’s rule or the BJP.

Though reluctant to speak to the media, she finally agreed to speak to The Wire about her experience so far. On December 26, though the NIA sought another ten days’ custody of Gogoi, the NIA court in Guwahati refused and instead sent him to 14 days judicial custody. He will be produced in court again on January 9.

Edited excerpts from the interview.

The image on local television of your husband being dragged into the NIA court in Guwahati on December 16 with hands tied behind him created a flutter in the state. Several organisations, including the All Assam Students Union, had condemned it and demanded his immediate release. The image suggested that this time, his arrest was different from previous ones.

Whenever he was arrested before and taken from one police station to another, I used to get some information from the authorities, at least a call, that he had been arrested under such and such sections of the IPC. But this time, there was no communication. I got to know of his arrest at Jorhat town only from local media reports. I got to know from those reports that he was handed over to the NIA (by the state government by evoking a nine-year-old case registered against him).

When he was brought to the NIA court in Guwahati, I was asked to sign some papers. I also got to know that Akhil was strip-searched and checked to see if he was concealing any weapons. It got me thinking how a person could be arrested and kept in custody for more than 24 hours and yet searched for carrying weapons. The NIA checked him for weapons after he was produced in court.

The court decided that a medical check would be conducted on Akhil every day and that his family could see him. But after that, the NIA whisked him away to Delhi that very night. We didn’t know about it, nor did the court grant the agency permission to do so. Even the media had no clue that he would be taken out of the state. Akhil Gogoi being produced before the special NIA court in Guwahati on Thursday. Photo: PTI

What else did you notice in the court?

There was a considerable presence of security officers at the NIA court, it was quite crowded. The investigating officer (IO) asked me to get some warm clothes for Akhil. Akhil always carries a bag of clothes with him. The IO told me the clothes in the bag were wet and then told me that it would be cold in Delhi. I was surprised at the mention of Delhi. I asked him whether Akhil would be taken to Delhi but was told that he would be kept in Guwahati for some days. The next morning, I began washing his clothes, so that a bag could be readied. But I was informed that he had already been taken to Delhi. It was shown on local TV channels too. I consulted his advocate about this.

When he was presented in court, I spoke to him. I noticed that he was subjected to some rude behaviour. He was asked to keep quiet and told many times, ‘Chup chup‘, which made me really angry. They cannot behave in such a manner inside a court. Another instance, was when he was taken from one room to another. He shouted ‘Joi Aai Axom’ (long live mother Assam). The NIA personnel told him to keep quiet. One among them said, “If you shout too much, we will too shout at night.” I heard this and asked myself what it could mean.

NIA officers should be apolitical. What is wrong in chanting ‘Joi Aai Axom’? The incident happened inside the NIA court. I was present there, signing papers. Akhil thereafter didn’t utter a word. Even some journalists who were present outside the court began asking what happened to him as he was not saying anything to them. He is known to speak his mind.

What did you do after you learnt that he was taken to Delhi without any information being provided to the family and without the permission of the court?

After consulting our legal counsel, we decided to submit two petitions to the court. One, why he was brought to court in handcuffs, in violation of the Supreme Court’s order and second, without informing any court, he couldn’t be taken to Delhi. That he was to be taken to Delhi the very night he was produced seemed pre-planned. (Both the petitions will be heard when Gogoi is presented in court on January 9).

Your house was also raided on December 26, the day your husband was to be produced in court. What was the NIA looking for?

Around seven in the morning, more than 20 police and NIA personnel surrounded our house in Guwahati. The chief NIA officer was quite polite to us. They went through some books kept in the house. We don’t have too many books, they glanced through few on the debates in the Constituent Assembly and on Gandhi, which were kept inside a cupboard. I noticed that a book on Karl Marx titled Karl Marx Communist Party Istahar, was thrown on to the floor.

They checked some files. From our home, a file on the NHPC (National Hydroelectric Power Corporation), which had replies obtained through the RTI, was taken away. Another KMSS file, which had some information on the credit deposit ratio related to the distribution of credit and deposit in the Northeast by the State Bank of India (SBI), on which Akhil was working, was taken. Akhil had pressured the SBI on its low credit deposit ratio and criticised other nationalised banks too for it. This happened during the Anna Hazare movement. (Gogoi was by Anna Hazare’s side during his fast in Delhi in 2013).

What else was taken?

There were two other files, One related to a book he has been writing based on his jail diary. It was a big file, divided chapter wise. The other was a small file which mentioned the people he met in jail and his experience while in custody. It also mentioned the poor quality of food and water provided to people in jail. He had written a few memoranda to the government on this issue, which were also in the file.

They also asked me for a file on the Kaziranga Orchid Biodiversity Park set up by Akhil. I told them that we don’t have it at home because it is a cooperative society and not personal property. I told them that the file would be in the park’s office. I did have two papers, one was the original certificate of registration and another was a formal letter from the ASI concerning some historical data. They took photocopies of both.

Another item which they took was the passbook of a bank account of Akhil. He had opened the account for a gas connection. A laptop which was quite old and which he barely used because he was not that well acquainted with gadgets was taken away too.

Did the senior NIA officer tell you anything? All Assam Students’ Union activists protest against the CAA in Nalbari. Photo: PTI

How are you coping with the demands of your work and the stress over the arrest of your husband?

I do my work with honesty. Akhil was arrested many times, but never did I let it affect my work. No one can complain that I compromised my work life just because my husband has been involved in activism. Even this time, when he was taken to Delhi, some wellwishers suggested that I should go too. But I told them I have exam papers to check and I cannot neglect my work. I love teaching and I have a big responsibility to educate young people.

How do your colleagues and peers react when your husband is arrested?

I have tremendous respect for the college in which I teach and towards my colleagues and peers. I was never harassed by anyone. Some people even offered their salutations for my ability to balance my professional and personal lives. Generally, I do not express my views to the media and even this time, when my house was raided, I didn’t speak much. I can only reveal the facts but can’t talk about politics. Right now, my priority is to check the exam papers. Just because my husband has been arrested, I cannot let it influence or affect my work.