The Chakhesang Women Welfare Society filed a civil suit in court against designer Ritu Beri and TRIFED over wrongful representation of Chakhesang shawls during a fashion show. 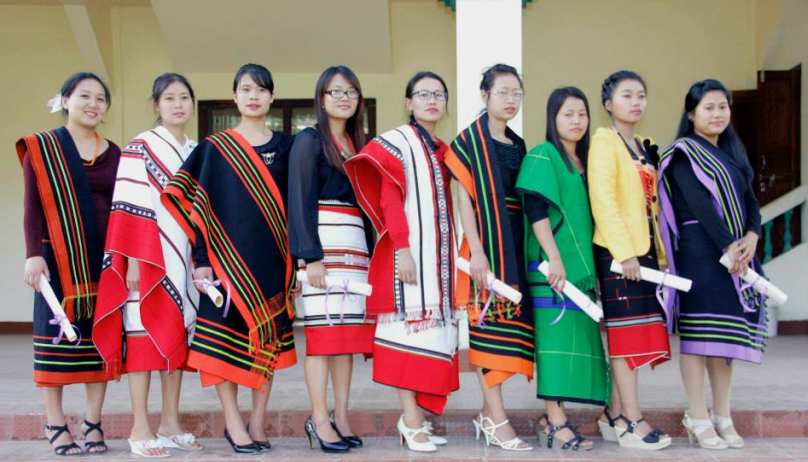 Last month, the Chakhesang Women Welfare Society (CWWS) filed a civil suit before the district court in Phek, Nagaland against designer Ritu Beri and the Tribal Cooperative Marketing Development Federation of India (TRIFED) over their use of Chakhesang shawls during a fashion show.

The Naga Narrative fashion show was held on February 7, 2020, in the Surajkund Crafts Mela, an international fair held at Faridabad earlier this year. The CWWS is a society formed in 1977  “for the purpose of protecting and safeguarding the interests of women belonging to the Chakhesang tribe of the state of Nagaland”. Renowned designer Ritu Beri is notably the chief designing consultant for TRIFED, which functions under the Ministry of Tribal Affairs and the former advisor of the Khadi and Village Industries Commission.

Why a designer affiliated with TRIFED would be accused of harming the interests of those that the federation is tasked to promote and protect deserves some discussion. The possibilities and limits of Geographical Indications (GI) under the Geographical Indications of Goods (Registration and Protection) Act, 1999, are also once again thrown up for debate with this incident.

In this article, we first analyse the strength of the proprietor’s i.e. CWWS’s claim under the Act. Do Ritu Beri and TRIFED need to ask for permission for using a traditional product in an international fair after (we assume) lawfully acquiring such a product? We also include a discussion on the remedies that the authorised user can expect in such cases.

Second, we discuss the policy considerations around GI registrations and enforcement in India. Is GI registration sufficient to protect a traditional cultural expression such as the Chakhesang shawls? In South Asian countries, including India, registration of GIs has been a top-down process – a style much different from popular European GIs, the standard of success we hope to replicate. This is not a wrong approach per se but shouldn’t we move towards a more producer-involved approach for GI marketing by government agencies?

The CWWS is the registered proprietor of the Chakhesang shawls which is a registered GI since 2016. That gives CWWS  the exclusive right to use Chakhesang shawls as per the Act. The GI specification for Chakhesang shawls emphasises on the social and cultural significance of these shawls. Each Naga tribe has a specific attire and the shawls “…are symbolic of various characteristics of its people such as beauty, prosperity, happiness, contentment, etc”.

In addition, there are different types of shawls that are worn according to the specific status of the individual in the society – some worn only by women, some only by elderly women while others only by men. Since CWWS had the exclusive rights to use these shawls, CWWS’s objection reportedly is about the use without permission and the manner in which the shawls have been represented being contrary to the characteristics as specified in the registration application.

The press release by the organisation reflects the deep humiliation caused by the incorrect representation of shawls in the mela as shawls worn by men were worn by women. The district judge has admitted the suit on September 7, 2020, as the court proceeded with issuing summons to the defendants allowing them a month’s time to file their reply. In view of the registration certificate in the name of CWWS being valid till 2025 and it being a prima facie evidence of validity under section 23 of the Act, the maintainability of the suit seems unquestionable.

Further, CWWS in the civil suit has reportedly claimed damages for “wrongful and illegal action for infringement of registered GI”. As per section 22 of the Act, a registered GI is infringed if it is used by a person, who not being an authorised user, inter alia, uses any geographical indication in a manner which constitutes an act of unfair competition.

An act of unfair competition includes any use “which in the course of trade is liable to mislead the persons as to the nature, manufacturing process, the characteristics, the suitability for the purpose, or the quantity of the goods…” Considering that the very basis of registration of Chakhesang shawls is its cultural expression and deeply rooted uniqueness, it can be argued that the defendants have infringed a registered GI by misleading the audience at the Surajkund mela as to the nature and the characteristics of Chakhesang shawls and the suitability of their purpose, thereby infringing CWWS’s exclusive right over the Chakhesang shawls.

For example, no one can use Chakhesang for their own products whether it is similar to CWWS’s product or not. Therefore, a reasonable argument can be made that the complete disregard for the social and cultural use associated with Chakhesang shawls infringes CWWS’s exclusive right to use such shawls. However, whether the “heavy trademark flavour” of the Act will allow this possibility to the proprietor remains to be seen.

Next, can Ritu Beri’s display qualify as ‘course of trade’ which is required under the Act to prove such an infringement? The Surajkund Crafts Mela organised by the Surajkund Mela Authority and Haryana Tourism this year is a paid entrance event. Crafts from more than 20 countries were represented and Beri’s work was an advertisement of the products as well as her craft. It is arguable that such advertisement is part of the ‘course of trade’ for both Beri and TRIFED.

On the other side, there are several factors which can swing the case in favour of the designer and TRIFED. The first of these is the concept of exhaustion under intellectual property laws. Under section 22(4) of the Act, once a product has been legally obtained, further dealings in the product are not considered infringement. Considering the limited litigation on GIs in India, it is still unclear how the courts will interpret such “further dealings”.

When the shawls are lawfully acquired, does a misleading representation of them still constitute infringement? How far does a GI right extend? How far should it extend? Such questions need further debating in India. A GI is a nimble right protecting the cultural heritage of a tribal community here. In fact, the increasing rate of GI registration in India is an example of people’s faith in this relatively new intellectual property right in the country.

We wonder though, if it is strong enough to achieve the heavy burden of protecting what is broadly called ‘traditional cultural expressions’ – a burden more commonly laid on the copyright protections in India. The international discussions on adequate laws for protecting these rights has been ongoing for decades at the WIPO intergovernmental committee.

Moreover, today the infringement has been alleged in India. If tomorrow, an Indian GI is infringed abroad, there would be an even smaller chance of a remedy. India is not a party to the Lisbon system for the international registration of GIs. This means that any GI protection in other countries is either if the producer organisation applies to a specific country or if the GI is included by the government under a bilateral or multilateral trade agreement for mutual recognition of GIs.

Also read: The Comical Farce Around the Rasogolla GI

Relief under the Act

Section 67 of the GI Act provides for relief that a court can grant in a suit for infringement which includes injunction and at the option of the plaintiff, either damages or account of profits. Grant of injunction requires the plaintiff to establish three ingredients with the aid of evidence, namely, prima facie case; balance of convenience; and irreparable loss or injury. Further the grant of compensatory damages for infringement requires the plaintiff to prove loss.

Recently, the Delhi high court in Koninlijke Philips NV & Anr v Amazestore & Ors provided detailed guidelines for grant of damages in a case of intellectual property infringement in India. It was stressed that the degree of misconduct by defendants in a civil suit should be determinative of the nature of relief to be granted and accordingly proposed the reliefs.

In view of the above arguments on infringement, it is apparent that establishing infringement or its degree might not be swift and straightforward. Accordingly, the grant of injunction or damages might not be an easy affair for the plaintiff.

It is worth mentioning here that the author’s analysis of the case is of course limited by the details available in the public domain.

Since the enactment of the Act till May 2020, 360 GIs have been registered. They are an impressive record of cultural products and indigenous knowledge present in India, and it is a positive step that the government is enabling the registration of so many GIs. Such registration can give a strong legal basis to producer organisations but it is not the end.

Considering the costs associated with managing and enforcing a GI and the lack of awareness amongst producers, GI registration has been a top-down process in India and as a phenomenon in most ASEAN countries. Experts call them “sleeping beauties” that need to be woken up by being used by the right holders in the market. Therefore, the suit by CWWS is a positive move. However, it is yet uncertain whether our GI law is ready for such enforcement. Moreover, several GI cases are resolved outside the courts, which is also positive considering that an adversarial resolution of disputes should anyway be the last step.

Advertisement of GI products in exhibitions like the Surajkund Mela and in government-supported endeavours like Tribes India by TRIFED is an excellent marketing opportunity for GI producer organisations and should be encouraged. However, use of products without the permission of the producer organisations and without consultation with them about their suitable use is not only undesirable but also rights-denying.

There is a good chance that the parties concerned with this civil suit would resolve this matter outside the court due to their interconnected interests. However, that does not resolve the underlying concerns with the inadequacy of India’s GI regime in protecting “traditional cultural expressions” of producer societies.

This incident also creates doubt about the level of consultation and involvement of producer organisations in such government initiatives. If the process was more bottom-up, chances of such conflicts would be lower. We echo the concerns of other commentators on the law and policy gaps in India’s sui generis GI protection regime.

The authors are grateful to Tanya Lal, BA LL.B. candidate at Guru Gobind Singh Indraprastha University, New Delhi, for her research assistance on this text.