From Ambedkarites and Labour Activists to Umar Khalid and JNU Students, Snoop List Targets All

New Delhi: The telephone numbers of an anti-caste leader and several prominent activists are part of a leaked database accessed by the Pegasus Project which includes individuals confirmed to have been targeted with the Israel based NSO group’s spyware.

Without digital forensics, it is not possible to conclusively establish whether their phones were hacked or infected. But their appearance on the list suggests that they were persons of interest to an unidentified client of the NSO Group that was focused on India. .

NSO says it only sells its Pegasus spyware – classified as military grade surveillance technology by the Israeli ministry of defence – to “vetted governments”. The Modi government has consistently refused to declare whether or not it is a client of NSO.

Ashok Bharti, who is chairman of the All India Ambedkar Mahasabha, an umbrella association of Dalit rights’ groups, had led the nation-wide Bharat Bandh on April, 2, 2018 against a recent Supreme Court ruling, which he claimed took away the teeth of the Scheduled and Castes and Scheduled Tribes (Prevention of Atrocities) Act. The ruling sparked massive demonstrations across the country, and the Bharat Bandh claimed 11 lives and left hundreds injured as the police took on Dalit protesters.

A few months later, Bharti gave another call for a nation-wide strike on August 9. It was in the months leading up to this strike that his phone number was selected as a possible candidate for surveillance.

When The Wire contacted Bharti, he said that he was not surprised as he had been actively campaigning against any dilution of the law. Forensic analysis of his phone was not possible as he no longer had the phone that he was using at the time of selection.

“We called off the strike on August 9, after the Centre budged and the Lok Sabha passed the amendments to the Atrocities Act. Soon after that, I started preparing our political outfit, the Jan Samman Party, to contest a few seats in the upcoming Madhya Pradesh elections,” said Bharti, who also leads the National Confederation of Dalit and Adivasi Organisations.

In 2019, WhatsApp stated that four of the activists mentioned above – Saroj Giri, Bela Bhatia, Alok Shukla and Shubranshu Choudhary – were affected by a Pegasus attack that took place through a specific vulnerability in the company’s security. Digital forensics conducted as part of the Pegasus Project have shed light on a wider range of attack vectors including zero-click iMessage exploits.

The numbers of all activists in this story appeared on the leaked list, some starting from 2017, and continued at different times up till 2019. Entries in the database run only up to mid-July of that year, making it impossible to say what the current status is.

WhatsApp is currently fighting a case against NSO in the United States over the hacking of customer accounts, including those in India.

Anirban Bhattacharya and Umar Khalid were two of the three students who were charged with sedition while they were doing their Ph.D in JNU. Since then, Anirban told The Wire, both of them, along with Banojyotsna Lahiri, have been involved in various organisational activities against escalating hate crimes in the country. They were also integral to different protests against the lynching of Muslims in recent years organised under the banner of Not In My Name and United Against Hate (UAH). Khalid, currently in prison as an undertrial, is facing prosecution under the stringent Unlawful Activities (Prevention) Act in the Delhi riots case, charges he has described as fabricated.

When informed about being marked as a potential target for surveillance, both Banojyotsna and Anirban told The Wire that they saw snooping by the government as yet another way to crush dissent.

“There are matters that are shocking and yet one is not shocked anymore, that is how low a benchmark there is for the state of democracy these days in the country. That’s the price one pays for peaceful and public dissent today,” Anirban said, adding that his friend Umar and many others are behind bars for “participating in non-violent dissent” against the Union government’s policies and moves.

“We have cooperated fully with the process of law as far as the JNU sedition case is concerned. We know, and even the government knows that, in time, the law would prove our innocence and expose how [the case] was simply a ploy to silence uncomfortable voices,” he said. 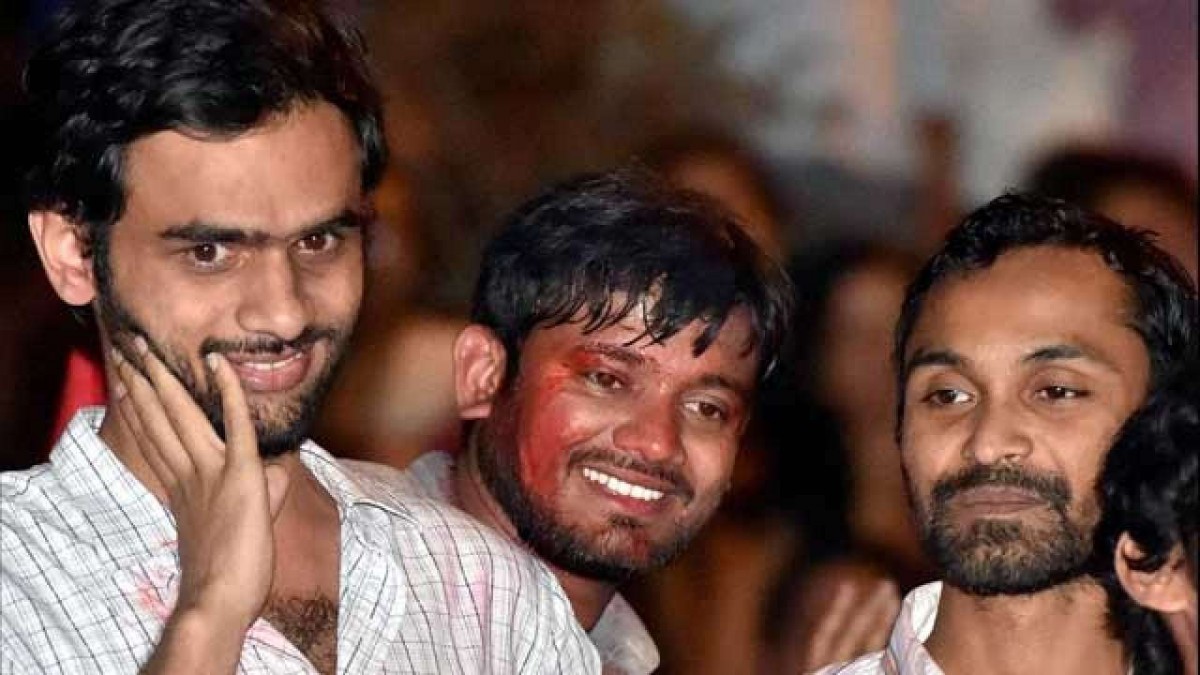 He added that between 2017 and 2019, he had been employed at the New Delhi-based the Centre for Equity Studies as a senior researcher foregrounding the plight of workers and the marginalised.

“I am not surprised… People are in jail for much less. Such is the new normal, a normalcy that violates the very essence of democracy,” he told The Wire.

In a similar vein, Banojyotsna expressed little surprise at her possible targetting. “We were tracking hate crimes, incidents of mob lynching and communal violence. During this course, we at UAH travelled to meet almost all the families of the victims, and even provided legal aid to many.”

“Despite the landmark judgment on the Right to Privacy, which was passed by a nine-judge bench of the Supreme Court, privacy has no meaning to the state authorities in India,” she said, referring to the 2017 Justice K.S Puttaswamy vs Union of India case.

Speaking to The Wire, Bela Bhatia said that she has been researching the Maoist movement across the country from the 1990s, and really does not know why anyone would wish to “persecute” for her human rights work.

“In Bastar, I have been working here less as a scholar and more as a human-rights activist, writer, and lawyer in response to the scores of human rights violations – especially fake encounters, sexual assault, and arbitrary arrests under fabricated cases – that are an everyday reality of the adivasis of Bastar.”

“Again, Naxalites are very much part of this work too, since the human rights violations are happening in their areas, and my clients are mostly poor adivasis from these interior parts who have been embroiled in serious cases, many under the draconian UAPA. Therefore, yes, the Naxalites have somehow been part of my life for 25 years now,” she said.

Saroj Giri, who was alerted by WhatsApp that he was a Pegasus target in 2019, told The Wire that his political positions are well-known and he was surprised when he learnt that he was subjected to surveillance. “I have been closely following and participating in multiple labour rights movements, and have spoken as an academic and activist against police and state atrocities, especially in regions where the governments claim to fight Naxalism. “I have been in a fact-finding committee to Jhargram, West Bengal to probe the West Bengal government’s excessive police action, and at the same time been involved in workers’ movements in Manesar, Gurgaon,” he said.

Shubhranshu Choudhary, who too learnt in 2019 that his phone was snooped upon, said that all his work was in the public domain. Founder of the CGNet Swara, a community radio station in Bastar, Choudhary has begun what he calls a “peace process” in recent years in regions which are heavily influenced by Naxalites. “It is highly objectionable that the mobile phones of citizens are subjected to surveillance, I have come to understand that if you are working to restore peace in a war zone like Bastar, you could be targeted both by the state and Maoists. Privacy is something neither of the forces respect, but I would expect better from at least the state.”

Shiv Gopal Mishra, who is a secretary of the joint consultative machinery for the central government employees union and general secretary of the All India Railwaymen’s Federation was also of interest to the India client of NSO group in 2018 and 2019. He said he was not surprised that he may have been under surveillance.

“We were very vocal on issues of the 7th Pay Commission, unfilled vacancies in government jobs and revision in pension schemes,” he told The Wire.

A Delhi-based independent workers rights activist Anjani Kumar’s phone number also appear in the records, and appear to have become a person of interest in 2018 and 2019. When contacted, he declined comment, citing reasons of privacy. Kumar had been frequently contributing articles to a workers rights Hindi magazine Filhaal on different labour issues and movements until a few years ago. As an activist, he has had a long record of participating in workers movements in the National Capital Region, including the Maruti workers movement in Manesar, Haryana, where he prominently participated.

Alok Shukla, convenor of the Chhattisgarh Bachao Andolan (CBA) is also on the list of potential spyware targets. A vocal rights activist in central India, he has participated in several anti- mining protests in the state. Shukla feels he could have been targeted for his activism, more particularly his stand against the Adani Group-operated coal mining projects in the state. “In the past few years, I have organised and led several protests against the Adani Group for their mindless mining project,” Shukla told The Wire. This, he says, must have made him a target of surveillance under the past Raman Singh-led BJP government in the state.

Mishra said that the attempts at surveillance show that the BJP government at the Centre does not care about the people. “Pichli sarkaron mein daya mamta hua karti thi. Ye sarkar sirf punjipatiyon ke liye kam karna chahti hai (Governments in the past had some empathy towards the people. This government only wants to work for the capitalists),” he said.

“Sabka sath aur mazdoor ka vinash (With everyone, but for the destruction of workers),” he said, playing on Narendra Modi’s slogan of ‘With everyone, for everyone’s development’.

Note: An earlier version of this article erroneously identified Ipsa Shatakshi as a Bihar-based activist. She is in fact based in Jharkhand.