Freedom Under Fire: Perfectly Elastic Sedition; Can the Disabled Speak? 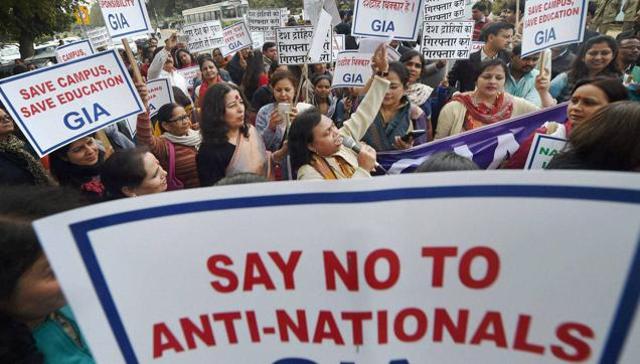 Ever since the JNU kand, the term ‘anti-national’ has crept into popular parlance, figuring every other day, when someone gets booked for sedition. But, while at the beginning of the year, we were asking what constitutes being ‘anti-national’, I think the more pertinent question now would be, what doesn’t constitute being ‘anti-national’? The applicability of Section124A seems to be infinitely extendable, with three widely different cases coming up this past week.

Universities seem to ‘breed’ sedition, with the Central University of Haryana joining the league of seditious universities last week. The Wire had reported on September 27 how students and teachers from the university were threatened with sedition by the ABVP for staging Mahasweta Devi’s Draupadi. Offensively ‘anti-national’ was the unflattering portrayal of Indian soldiers in the play, because of which performing the play became an ‘anti-national’ act in itself.

On September 28, former Supreme Court judge Markandey Katju found himself part of the ever-increasing number of ‘anti-nationals’ over a contentious comment – Katju had insisted that Kashmir should be given to Pakistan if they agree to take Bihar as well. Following a complaint by a JD(U) MLC, he was charged under Section 124A, among other things. An unfazed Katju continued to be blithely ‘anti-national’ on social media, palming out several snide remarks, such as the tweet below.

Meanwhile, in Kishtwar, Jammu, 40 people were reportedly booked for sedition for taking part in ‘anti-India’ protests between July 11 and September 13, the Indian Express reported on September 29. Apprehending arrests, the ‘anti-nationals’ are now absconding.

On the same evening, Mahesh Jethmalani, advocate at the Bombay high court, appeared on Times Now to clarify that legal provisions should be made to ensure that anyone who claims Pakistan is a stakeholder in the Kashmir issue can be booked under sedition.

Law should now recognize; it shall be sedition to talk about Pak being a stakeholder on Kashmir issue: Mahesh Jethmalani #IndiaStrikesBack pic.twitter.com/21VyEpnJW8

Can the differently-abled speak?

India has not been particularly friendly towards disability. Youth ki Awaaz reported earlier this month that the Rights of Persons with Disabilities Bill in still in parliament, waiting to be passed, while not enough data is being collected by the government to make the legislation viable.

On September 25, the Mint published a story about a village in Karnataka with over 20,000 people with hearing disabilities. The 2011 census had recorded the number of disabled at the village, Alipur, at roughly 11,000. Alipur has taken matters into its own hands over the past few years, with an informal community leader shouldering much of the initiative in ensuring that the disabled in his village can communicate with the outside world. With a substantial number of its residents having hearing disabilities, the area has developed its own sign language, specific to the region’s dialect. This prevents many of the villagers from communicating with people outside because they cannot follow standardised languages such as the Indian Sign Language. However, attempts are being made indigenously, largely by a man who is also disabled, to educate the villagers in standardised sign languages so that they can build a better life for themselves outside the village.

For the differently-abled who manage to overcome several barriers to find a place in a university campus, the very architecture of the institution can become a challenge. For several years, the visually challenged students of JNU have demanded that the campus be made more disabled-friendly. While the administration has constructed a scattering of ramps around the campus to make navigation easier, systematic planning is evidently lacking. On September 28, the JNU Visually Challenged Students Forum announced a demonstration to protest the increasing dog and cat menace on campus. They said that they have long demanded a barrier-free campus that will not be possible if the dog and cat problem persists.

Some students have expressed concern on social media that this privileges human rights over animal rights when a solution that is amenable to both should be sought.

Even after Prime Minister Narendra Modi denounced gau rakshaks early in August and the rest of the BJP followed, hesitantly nudging itself towards a more Dalit-inclusive rhetoric, cow-vigilantes struck again on September 26. The victims this time were a pregnant Dalit woman and her family. The reason they were attacked? They refused to move a cow’s carcass. According to the Indian Express, the family was assaulted in Gujarat’s Mota Karja village, when they said they would remove the carcass the next morning, rather than at night as their attackers had demanded.

On September 25, Scroll reported that there were 1,816 recorded instances of crimes against scheduled castes in 2015. Despite the existent law against atrocities, Dalit rights are hindered time and again owing to ineffective implementation. With rising crimes against Dalits, the Maratha demand that the law be repealed is tantamount to demanding that the Dalit community be excluded from justice altogether.

Attempts to empower the community have also been less than heartening. On September 19, IndiaSpend , in a report, claimed to have found that over the last 35 years in Madhya Pradesh, the “Rs 2.8 lakh crore ($42.6 billion) set aside to improve the lives of scheduled castes and scheduled tribes by way of measures like mid-day meals, scholarships and crop insurance was simply not spent.”