Freedom Under Fire: Trump Raj Begins Today, Hold on to Your Rights

As Donald Trump takes over the reigns from US President Barack Obama today, this week's column focuses on a selection of rights issues that are likely to suffer under his administration. 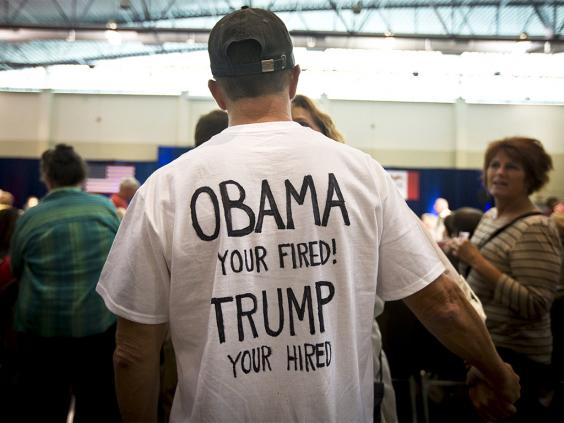 Having studied history, one becomes acutely aware of how the universe works in strange ways. And as a consequence of the universe’s bizarre machinations, today, January 20, will go down in history as the day Donald J. Trump took over the presidency of the most influential country in the world.

From halfway across the world, it is perhaps a little difficult to take President Trump seriously. His unbelievably mind-numbing statements make it easy to dismiss him as a threat because of his sheer ridiculousness. But as George Carlin had once sagely noted, “Never underestimate the power of stupid people in large groups.” Trump’s election is symptomatic of just that.

When Trump proposes to build a wall, or says he wants to jail Hillary Clinton, there is palpable outrage. He can’t really do that, can he? But if, hypothetically, he were to make good on his promises, reality would look like a veritable dystopia at the drop of a hat.

Human Rights Watch, in its 2017 report, has already portended the loss of rights under Trump as a legitimate possibility. Kenneth Roth, executive director of the organisation did not mince words when he warned the world that Trump’s presidency bodes ill for various shades of activism. He wrote in the report,

“Trump and various politicians in Europe seek power through appeals to racism, xenophobia, misogyny, and nativism. They all claim that the public accepts violations of human rights as supposedly necessary to secure jobs, avoid cultural change, or prevent terrorist attacks. In fact, disregard for human rights offers the likeliest route to tyranny.”

Just because a populist in his wisdom says the majority wants it doesn't justify trampling rights of the disfavored. https://t.co/JsJZ825fSO

The Independent has helpfully put together a list of the positions that Trump holds on various rights issues, which can be found here. This week’s column looks at some of the threats that Trump poses to a selection of rights issues based on his behaviour thus far.

“Today, the American working class is going to strike back,” Trump had proclaimed in his final campaign speech. Leaving aside the irony of a man rolling in vulgar amounts of money declaring himself the Moses of the working class, one wonders how committed he is to the 40% of the US working class which is non-white.

Playing up and capitalising on fears, Trump’s victory was seen as the revenge of the working class at first. A closer look, however, showed that this was not the case. An extensive study conducted by Gallup found that people who voted for Trump were not the economically downtrodden, necessarily. Jonathan Rothwell, who conducted the study told the Washington Post, “He [Trump] says they’re suffering because of immigration and a diversifying country, but I can’t find any evidence of that.”

Chris Edelsen, author of Power Without Constraint: The Post 9/11 Presidency and National Security, writes, “Voter anxiety is more about race and identity than finances.” Edelsen warns that Trump’s reluctance to separate his business from politics could lead to a constitutional crisis. Trump represents the interests of big business. Particularly, his big business. Already, Trump has made public his intention of having foreign dignitaries stay at his hotels. “As long as Trump’s business operates with his name as the brand, foreign officials will have an incentive to stay at Trump hotels and shepherd Trump business ventures overseas — regardless of whether Trump himself or his children run the company,” Edelsen pointed out.

But if the working class don’t gain under President Trump, they might certainly have something to lose. “Nobody is going to die on the streets with a President Trump. We’re going to pay for everybody.” Trump told Fox News (and yes, he referred to himself in third person). This was Trump defending his intention to repeal Obamacare. After a Senate vote on a budget resolution, the possibility of a Republican overhaul on Obamacare seems likely. In its place, Trump offers “something terrific.” He intends to get private insurance companies to take care of people “that can afford it.” Helpfully, Trump says that care will be given to those who can’t afford it. But since Trump subscribes to a notion of “the deserving poor” and “undeserving poor”, race might be an important factor in deciding who can or cannot afford healthcare under the Trump administration. Also, who wins in this scenario? Private insurance companies, a.k.a. big business.

The Washington Post predicts that the Affordable Care Act will be repealed by April 30, 2017. If that happens, the working class who Trump purportedly represents, will no longer have access affordable public healthcare.

No country for refugees

Whether or not Trump actually gets around to building that wall on the Mexico border, he has already managed to build a wall of fear. His persistent anti-immigrant stance ties in with his image as the champion of the long-suffering white working class.

As the world experiences the worst refugee crisis in history, Trump actively fanned a xenophobhic fire drawing on the fear and anxieties of paranoid white Americans who are worried that one of these days they will wake up to find themselves a minority in their own country. 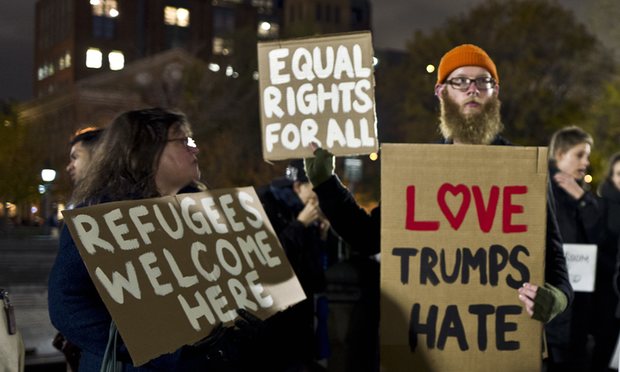 According to the Guardian, Trump might stop new refugees coming into the US altogether, even as the crisis in Syria boils over. The attacks on refugees during Trump’s campaign showed what effect his inflammatory language could have in enabling anti-migrant sentiments. And, consequently, refugees in the US have been living in fear of deportation, wondering what will happen to them after today when Trump in sworn in.

Trump’s hard line on immigrants isn’t about cutting down competition for white working class Americans because Trump’s economics is clearly a fallacy. It has more to do with racism, xenophobia and Islamophobia. Trump has threatened to create a registry of Muslims in the US and have them tracked in the interest of national security, but as the Guardian points out, this is probably unconstitutional. He has been most vocal about instituting a “total and complete shutdown” on Muslims entering the US.

In the wake of Trump’s campaign, hate crime has risen, especially against Muslims in the US. Anne Richard, the assistant secretary of state for population, refugees, and migration is worried about what Trump’s administration might mean for refugees looking to make their way to the US. She told Time, “I get these letters saying ‘Oh, you’re naïve, terrorists are going to use this program to infiltrate the United States. I don’t think I’m naïve. I’m looking at facts. The debate in the United States centres on this question of whether or not people should be afraid of refugees. I think not.”

Despite that, Trump’s supporters seem to be applauding his stance. Texas Congressman, Brian Babin recently made a triumphant declaration, “I am confident president-elect Trump will do everything in his power to put an immediate stop to this secret Australian-US refugee deal that should have simply never happened in the first place”. He was referring to an agreement made between President Barack Obama and Australian Prime Minister Malcolm Turnbull for the resettlement of refugees from Australia’s offshore detention centres Manus Island and Nauru. Adopting, once again the rhetoric of national security, the suspicious Babin said, “This secret deal to import dangerous refugees into the US is exactly what the American people soundly rejected in November with the election of Donald Trump.”

Hiding hatred, intolerance and fear behind an allegedly threatened national security is not new. It’s the oldest trick in the book.

Interestingly, a letter was signed by 1,500 rabbis asking the Trump administration to not tamper with the US refugee resettlement programme. And while they were pleading on behalf of Jews, a section of their letter is worth reproducing, purely because it reminds us about a very important history lesson.

“Jewish history bears witness to the critical choice facing our country: whether to rescue those in need or to construct barriers to keep them out…..“We have seen xenophobia overwhelm our nation’s capacity for compassion, and we have seen the doors slam shut in our greatest hours of need,”

And then there is also Trump’s unapologetic and unmitigated sexism. The US will now be run by a person who, in addition to being a xenophobe, is also a misogynist. Trump’s position on abortion rights, in particular, is another cause for women to worry. 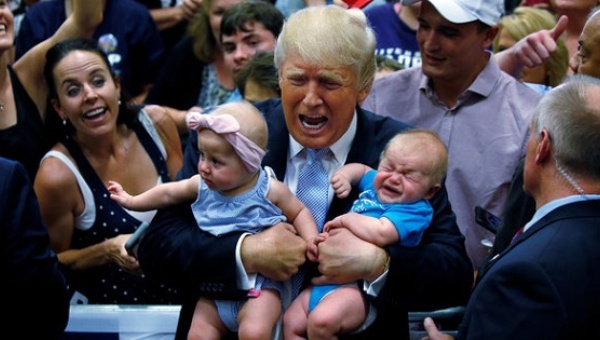 Donald Trump holds babies at a rally in Colorado Springs, Colorado on July 29, 2016. He is not believed to have booted either from that rally. Credit: Reuters

Reproductive freedom has been a contentious issue in the US and around the world. And Trump’s position in this regard, like his position on very many other things, is worrying to say the least. He has said, with the hyperbole that comes so easily to him, that he would rather shut down government than fund planned parenthood. On the other hand though, he expressed an intention to completely ban abortion, with the exception of rape, incest or in the event that the pregnant woman’s life is in danger. To this effect, Trump said he would ensure that anti-choice judges are appointed in the Supreme Court, which is alarming not only because of what it means for reproductive healthcare, but also because it shows he is clearly keen to actively intervene in the course of justice.

The actor Natalie Portman has said that Trump’s administration would be terrible for civil rights. ” [John F.] Kennedy was a great proponent of civil rights,” she told the Guardian, “and was quite revolutionary in that – and devoted his entire life to public service. Which cannot be said of Mr Trump who is, what, 50 or 60 years later in history, and is taking us backwards on civil-rights issues. And also has only just started his public-service career at 70.”

All in all, it’s a grim day for rights.