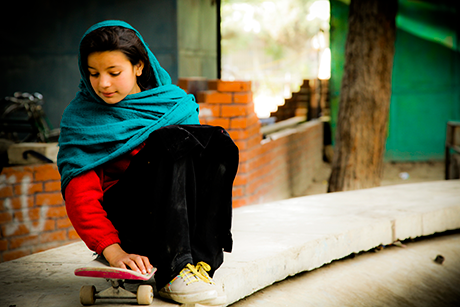 Skating parks are not your conventional ideal spaces for education, especially in a country like India, where skateboarding has never really held much currency as a recreational activity, let alone an activity that could be used to drive social change.

But for Asha Adivasi from Bundelkhand, skating opened up a world of opportunity. NDTV reported her story from Jaanwar, her village in Madhya Pradesh, with the bold headline, ‘My Name is Asha Adivasi and I am Going to Oxford to Study English’. And she is, thanks to the efforts of Ulrike Reinhardt.

Reinhardt wanted to build a skater-park in Jaanwar to help educate the local tribal children. The park, called Jaanwar Castle, became a space where the children of the village were taught hope, in addition to skating and English, among other things.

Reinhardt borrowed this idea of involving youth via skateboarding from Skateistan, a global NGO, which has an equally fascinating story. Founded in 2008 by Oliver Percovich, an Australian who now lives in Kabul, the idea was to reach out to children at risk and help reclaim some of their childhood. Especially in war-torn Afghanistan, it was important that children envision a better future for them themselves, look up to each other and enable each other, rather than having tyrannical war-lords perpetuating a legacy of strife as role models.

Skateistan has been especially helpful for girls in accessing education. More than 40% of the enrolled students are girls according to the organisation’s website. Currently, the organisation has schools in Kabul and Mazar-e-Sharif in Afghanistan, Phnom Penh in Cambodia and Johannesburg in South Africa. Sunderbans: the labyrinthine mangrove forests support a complicated and biodiverse ecosystem and has been a world heritage site since 1997. Credit: Wikimedia Commons

Activists in Bangladesh organised a march to the Indian High Commission on October 18 to hand over a letter addressed to Prime Minister Narendra Modi to ask him to relocate the proposed Rampal power plant, which is a joint venture between India’s National Thermal Power Corporation and Bangladesh Power Development Board. The Daily Star reported that tear gas shells and water cannons were used by the police to stall the march by the Bangladeshi police. However, five people were allowed to hand over the letter addressed to Modi.

In an instance of cross-border solidarity, Indian activists also joined campaigners in Bangladesh and on October 19 they wrote a letter to Modi asking that he withdraw support from the thermal power project.

Opposition to Rampal arose because of the environmental concerns it raises for the Sunderbans. A UNESCO report has detailed the disastrous consequences the project can have for the mangrove forests, which is also a world heritage site. The International Union for the Conservation of Nature (IUCN) which investigated the Rampal project and visited the proposed site found that the 1320 megawatt super thermal power plant can damage the fragile Sunderbans ecosystem by several kinds of pollution and “lacks a clear and comprehensive assessment of the combined effects from increasing coastal development.” This means that the population dependent on the stability of the Sunderbans’ ecosystem for their livelihoods will suffer as well.

The IUCN recommended that the site, which is only 65 km from the Sunderbans, be shifted or the project be cancelled altogether. UNESCO has asked the Bangladeshi government to respond within December 1. Will Bangladesh decide in favour of the environment? The absolute symbolism of the Indian patriot

On October 18, the Times of India reported an assault on wheelchair-bound writer Salil Chaturvedi in a multiplex in Goa for failing to stand up while the national anthem was being played.

Chaturvedi has since decided that going to the theatre is no longer an option for him, and told the newspaper, “I now believe that even if I could stand up during the national anthem, I would rather not, simply because I am being forced to do so.”

A similar incident was reported in Mumbai when a man was beaten up because his South African girlfriend failed to stand as the anthem was played.

These incidents speak volumes about the jingoism that the current regime is helping to foster, where conforming to vacuous symbols become a measure of loyalty. Not chanting ‘Bharat mata ki jai’ is the equivalent of being seditious in the series of false binaries that are being vehemently endorsed in the country, while logic seems to have nose-dived out of the conversation

This brand of patriotism is absolute, with no room to accommodate various forms of expression.