To protect free speech we have to tolerate what we do not like, sometimes even what we abhor. 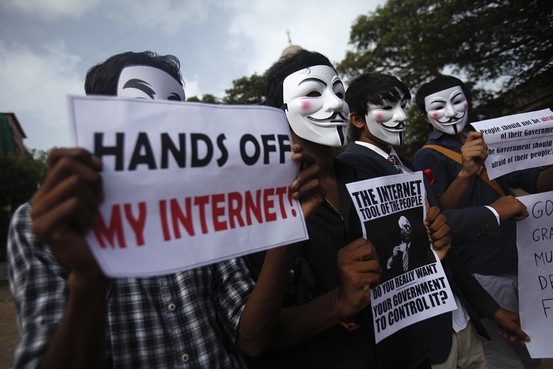 If we want to protect free speech then we must tolerate what we may find abhorrent, even on social media. Representational image. Credit: Reuters/Files

Social media is a Janus-faced creature. In principle, it offers the possibility of enhancing free speech and gives a voice to millions. It makes authors and opinion makers of folks who otherwise would have been passive consumers of opinion. But there’s also another face that social media wears – a face that is sometimes ugly and threatening. Often, it can blur the lines separating fact from fiction. The multitudinous voices can, at times, be deeply offensive, divisive, violent and plain disgusting. If you are feminist and a woman, and vocal on Twitter, you know what I am talking about.

More often than not, one refrains from making a general case for speech regulation on social media, because if social media is a strange beast, law regulating free-speech is a stranger beast still – known to be capricious, discriminatory, and necessarily power-driven.

Recently, the Ghaziabad police arrested a Nagar Palika councillor from Loni earlier this month and charged him with posting a derogatory photograph of chief minister Adityanath on his Facebook wall.

Last month, a 22-year-old man was arrested by the Greater Noida police for allegedly posting objectionable content against Adityanath on his Facebook wall.

On March 25, filmmaker Sirish Kunder had a FIR registered against him over his tweets criticising the BJP’s decision to appoint Adityanath as UP chief minister.

On March 28, a medical practitioner was arrested in Jhabua, Madhya Pradesh, on charges of hurting the religious sentiments of a particular community by posting a picture of a sadhu buying meat.

On April 15, the Delhi BJP lodged a complaint with the police against Delhi chief minister Arvind Kejriwal for dubbing the Election Commission as Dhritrashtra!

In these instances, the one common thread is the use of state power to discipline and punish anything interpreted as an offence against sovereign power. But on the social media morality-meter, these posts and remarks were quite mild and temperate.

Where does this exaggerated sense of indignation and intolerance stem from? Is it a bloated sense of righteousness or just a bad sense of the democracy? In either case, the response is the use of state power delivering a subtext of fear.

Obeisance to whataboutery demands that I put on record that this is not the first time that state power has been used to come down on speech-acts on social media. It seems to be required of politically unaffiliated commentators to prove their neutrality by producing a prequel before they critique current transgressions. So here’s a brief flashback, from other times, of other governments.

Cartoonist Aseem Trivedi was arrested in 2012 for displaying cartoons on his website and Facebook page, mocking parliament and corruption in high places; two young girls from Palghar were arrested for asking, on a Facebook page, why the city was shut down for Shiv Sena leader Bal Thackeray’s funeral; a Jadavpur University professor and his neighbour were arrested for allegedly circulating a cartoon that lampooned West Bengal chief minister Mamata Banerjee; two Air India cabin-crew members were arrested in May 2012 for allegedly posting indecent jokes about former Prime Minister Manmohan Singh and other politicians and for insulting the national flag.

Equivalence drawn, there’s something that needs to be said about the giddy speed and alacrity with which state power is descending on vulnerable individuals whose only fault seems to be the use of sardonic humour. A government, with all its power and resources, police, army and privileges, should surely have a bigger appetite for satire and humour. But perhaps this is also under portion control!

The speed at which the lines of speech are drawn is not incidental. If the Congress government has been guilty of unleashing precedents on us over years, the BJP seems to be in a hurry to achieve the same in the space of a few weeks. The speed and promptness is a measure of its intent and agenda. Also, these arrests seem to be sending a notice to dissenters whose offence, in the hierarchy of offences, would be far graver.

What we stand to lose

In each of the cases cited, a politically powerful figure uses the constitutional principle of “reasonable restrictions”– embedded in one or more of the IPC provisions of section 295 A (deliberate and malicious acts, intended to outrage religious feelings of any class by insulting its religion or reli­gious beliefs), section 124A (sedition), section 153A (promoting enmity between different groups on grounds of religion, race, place of birth, residence, language, etc, and doing acts prejudicial to maintenance of harmony) and section 505 (statements that clause “public mischief”).

But this is how this “new voice” is. It is not so civil. Or maybe this is the new civil, a civil that is often without grace, courtesy and that is misogynistic, disrespectful and irreverent. Like viruses, these messages, ideas, opinions spread and mutate fast – like versions of deep pathologies that are hard to diagnose and treat. Viral as they may be, social media platforms are the new terrain on which the right to free speech and expression is exercised. In order to protect our larger freedom of speech, every turf that speech chooses as a mode of expression needs to be fiercely protected, even when we know that this voice can hurt feelings, berate and insult.

In a classical liberal space, the realm of “feelings” belonged to a sphere that was designated as “private”. It was a space cordoned off from encroachment by the state.

If it were to be conceded today that this realm needs regulation and restriction (beyond what is required to govern a rational public sphere), we in effect sanction the capacity of a democratic state to police a realm that is private. We, and our sense of propriety, civility and righteousness, become complicit in the project of free speech violations.

Free speech is not just an addendum to something called a democracy. It is what marks an open society from a closed one. It is what marks a liberal democracy from a new mutant called electoral authoritarianism. To protect free speech we have to tolerate what we do not like, sometimes even what we abhor. It requires the suspension of our personal and ideological sensibilities, which often function as tests of what can pass and what cannot. It is precisely this that will enable us to question state power when it seeks to privilege it’s own ideology and power over the principle that underlies our constitutional right to free speech.

Rajshree Chandra is the author of the book The Cunning of Rights: Law, Life, Biocultures. She teaches political science at Janki Devi Memorial College, DU.