For Sanitation Workers in Aizawl, Stigma Isn't a Problem

The church has played a role in emphasising the dignity of labour, as has the primarily casteless nature of Mizo society. A resident handing over dry waste to a pick-up van in the Aizwal colony.

Aizawl: The multi-storeyed Aizawl Municipality Corporation (AMC) office is on the outskirts of Mizoram’s capital city. The glass- and tile-lined civic body building stands out on National Highway 54, close to the city’s inter-state bus terminal.

On the second floor of that building sits Ralthuama Raite, the town planner. By the time I reach his door along with Thuamtea, a sanitation inspector with the AMC, it was mid-morning, his tea time. The room was filled with AMC workers, sharing a cup of tea with the boss.

An affable Thuamtea took charge. “First, meet my neighbour; she has been working in our department for about five years now,” Thuamtea introduced a smiling Lalremruati to me.

Middle-aged Lalremruati is a sanitation worker at the AMC. She and five other co-workers and their sardar, or head, were in the room after finishing their early morning work. “The tea is on him, on Mr Raite,” said I.C. Lalremruata, the sardar, looking at me, even as others broke into a laugh.

The spirited bonhomie among these sanitation workers and their boss couldn’t be missed. In the rest of India, civic body jobs like that of a sanitation worker almost always have strong links to caste and class. Given that, such sociability between them and the officers of the municipal body came as a welcome surprise.

“We don’t look at them only as sweepers or sanitation workers. They are like any fourth grade government employee, my junior colleagues. Some days, we also make them work as peons or office assistants, to run errands,” said the town planner. A little later, AMC commissioner H. Lalthlangliana, explained it better. “This arrangement of using them for other work is also because the government created more posts for sweepers than we needed. There are 195 sweepers on our rolls to clean a mere 12-km stretch, the main spine of the city, from Thuanpui to Kulikawn,” he said.

The story gets more interesting. Lalthlangliana said, “Some of our sweepers work as teachers at the Sunday school in my church. So in the office I am the boss, but in the church on a Sunday, they are my boss.”

The church, a powerful socio-religious entity across Mizoram, does play a role in emphasising the dignity of labour. But Mizo society, primarily casteless, has also contributed to this lack of social stigma in jobs sanitation.

“A sweeper’s job is like any other job in Mizoram. In fact, some people think it is a better job than some other work because it is a government job,” said professor Zokaitluangi, dean of the School of Social Sciences, Mizoram University. She said, apart from caste factors not at play in Mizo society, the camaraderie witnessed at the AMC office also has to do with the community at large being a close-knit one.

“This feeling of oneness prevailed much before Christianity came to Mizo society. It was tribal culture that instilled such values. We are a small community; many of us are either related biologically or by marriage, or belong to the same village, neighbourhood, etc. In a way, everybody knows everybody, rich or poor. The advantage is, we also speak the same language. There are common values, common interests, common traditions. We are a homogenous society.”

Zokailaungi went on to give more examples to underline her point. “If a neighbour grows vegetables in the backyard and has some to spare, he will pass it to me and vice versa. It is a very common thing to do. When a person falls sick in the village, the community provides his family firewood and at times food as they would be busy with the sick person. The community also sends people to work in their farm.”

“When a person dies, the entire community and relatives surround the grieving family. Sometimes a community holiday is announced on such an occasion. The relatives and friends get the shroud and cover the body. This is the continuation of an old tradition when cloth was in scarcity; people had to weave it. So whoever had it already would bring it.” Earlier, people used to stay with such a family for about a month. “These days, everybody is busy but they stay with the family at least for three days.” Village youth are mobilised by the Young Mizo Association (YMA) for this. “They also bring along their bedding.” 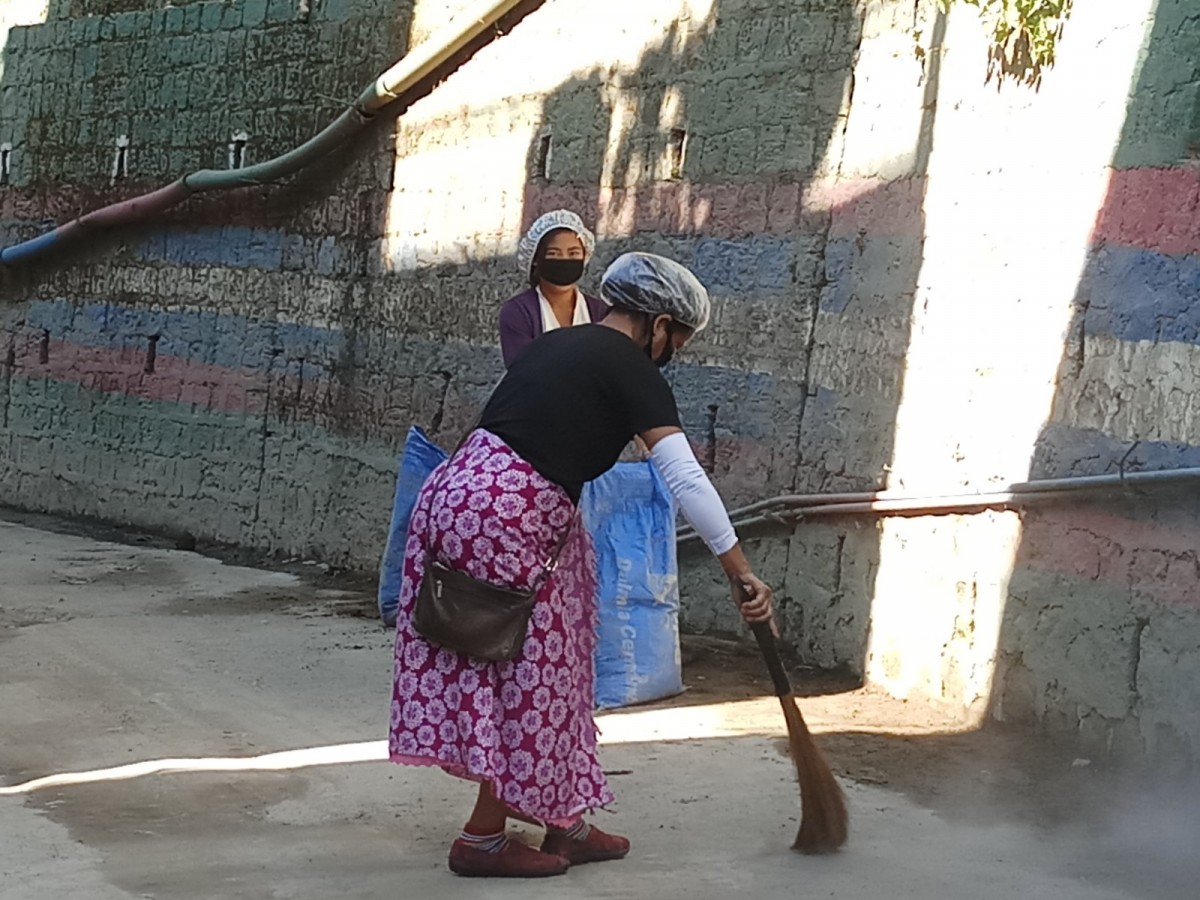 Neighbours clean the road in front of their houses in an Aizwal colony.

YMA is the single-most influential socio-religious body in Mizoram, with nearly 4.5 lakh members across the state, and is backed by the Presbyterian Church. It also finances funerals if the family can’t afford it. “It is based on donations raised by the local YMA and local councils. Everyone pays. The sense of community is reiterated through these practices,” she said.

The senior academic also pointed out, “This sense of sharing in the society is the reason you will not find a Mizo beggar. We do sometimes see an odd beggar on Aizawl streets, but rest assured they are not from the state.”

How the system works

Sanitation worker Zosianliana said she picks up the broom every day before the sun rises because she “is used to community work.”

“In some places, we have to start work at 2 am to avoid traffic and at some places only at 5 am. But no problem,” she said. The AMC provides them with gloves, gumboots and raincoats. “We all have uniform too. Once the sweeping is done, we return to office to keep our broom and other cleaning equipment on the ground floor. We change into our usual clothes and then we may be given some other work to do,” she explained.

Across Aizawl, mainly in the residential areas, what strikes you is the clean surroundings. Waste is found only in the dustbins; it is not an unusual sight to find two neighbours coming out with their brooms to sweep the road passing in front of their houses. Mizos, with a lot of pride, would tell you about some villages taking the pledge to make their area the state’s cleanest a couple of decades before the Centre’s Swachh Bharat Abhiyan was announced.

Biate, situated in Champhai district, is one such example. Its cleanliness drive involving the local community is also having an effect on the control of diseases like malaria, otherwise common in the state. “Recently, I went to a small village, a settlement of about 60 families, named Piler. The community’s endeavour is to make Piler the cleanest village,” said Mizo People’s Forum president Reverend Lalbiakmawia. In his colony in Aizwal, cleaning the common areas is taken up as voluntary work by the residents. “People do it in turns. The AMC workers clean up only the main spine of the city. The residential areas are kept clean by people. We don’t look at rich or poor. It is social work,” he said.

The YMA has a role to play, too. Besides making announcements from time to time to keep surroundings clean through the public address system it has installed in every colony, the Church-backed body also runs an awareness campaign through its newsletter and house visits, and organises community service cleaning of drains in residential areas.

Some local councils have also formed health, sanitation and nutrition committees, aside from setting up close circuit cameras to catch defaulters in public areas. The AMC has set up CCTV cameras in over 30 areas of the city to maintain cleanliness. Some churches also carry out cleanliness drives on their own.

The existing practice of people’s participation in cleanliness drives has helped the AMC involve residents of ten colonies to segregate dry and wet household waste. “It is a pilot project we started in 2009 with the help of Asian Development Bank (ADB) as part of the North Eastern Region Capital Cities Development Investment Project. It is on trial run in these colonies as a Public-Private Partnership model where we involve the local NGOs and councils to collect the household waste. We pay the waste collection cost to these bodies. They collect it from a pre-decided place, called, sanitation point, set up in every colony,” said commissioner Lalthlangliana. He said the model is considered to be a success and “soon there is a plan to fully privatise waste collection”. 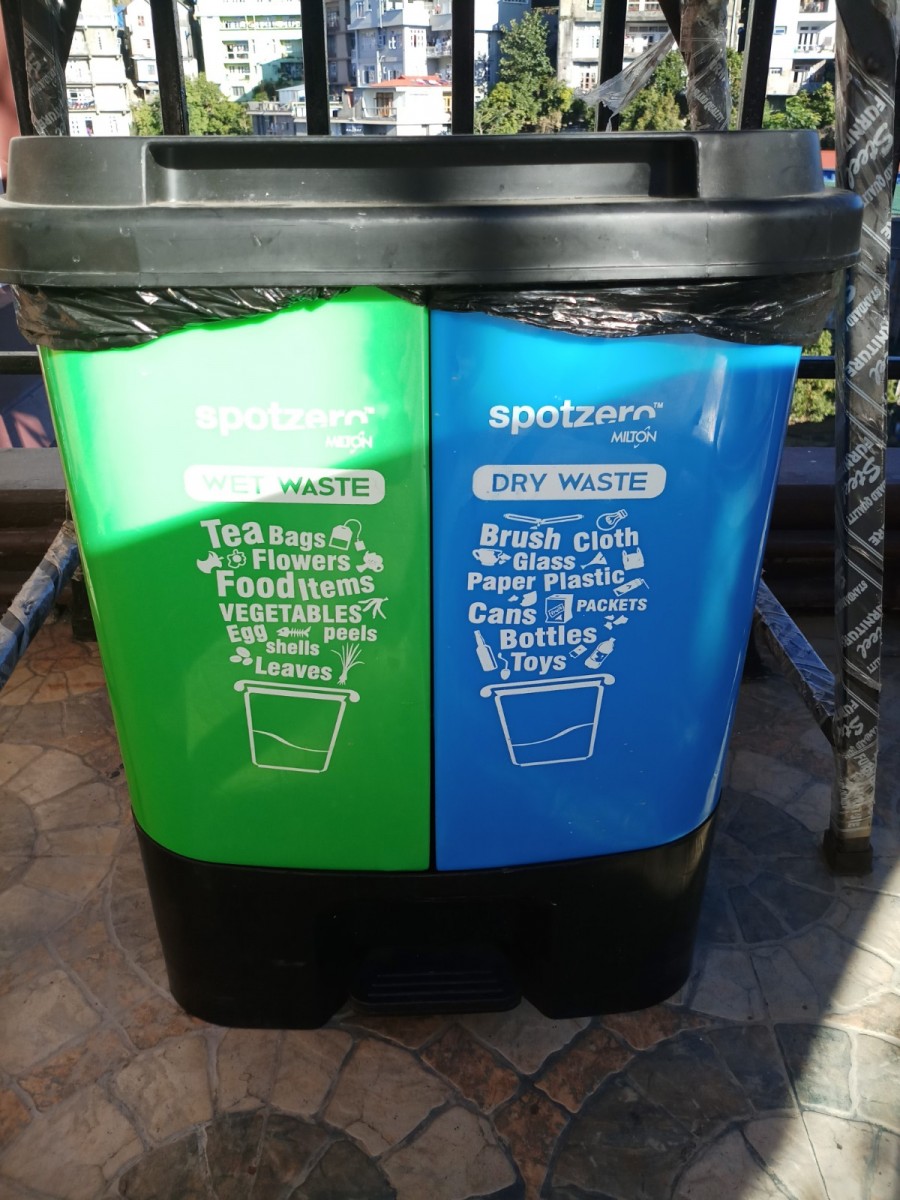 To each household in these colonies, AMC distributed a large dustbin that separates wet and dry garbage. A total of 50 pick-up vans make a round to collect dry and wet garbage on demarcated days. “In come colonies dry and wet waste is collected every alternate days and in some others, the vans go to collect only three or four times a week. Each day is demarcated for dry and wet waste.”

Typically, the driver of the van, on reaching a sanitation point, frantically rings a brass bell. “They come out hearing the bell. If one is not at home, he can put the wet or dry garbage according to the day at the point before we come and we will pick it up,” said Malsawma, one such van driver in the city’s Chwangpui colony.

Each household pays a monthly fee of Rs 20 to the local council/NGOs for waste collection. The collected waste is dumped at Turial, on the outskirts of Aizawl. The AMC commissioner said, “There has been a demand to have more dumping yards from various quarters and rightly so, because of the growing amount of waste every year. Mizoram is also one of the most urbanised states in the country. Aizawl is also in the Centre’s Smart City project.”

Though AMC and the Department of Urban Development and Poverty Alleviation (UD & PA), which is the nodal agency for monitoring the ADB-funded solid waste management project, looks at it as a success, Mizoram University professors Lalneihzova and Hc Lalchhuanawa, in a paper presented in February 2018 pointed out that the project has so far covered only 80.4% of the city’s population.

Though caste may not lead to people becoming sanitation workers in Mizoram, conversations with Lalremuata, Zosianliana, Lalhamchhuana and some other colleagues at AMC confirm that they took up the job out of extreme need.

Lalhmachhuana’s father was a barber in Aizawl. “I was happy when I got the job; at least a steady income,” he said. The town planner (third from left) with sanitation workers in his office.

Malsawulini, a Mizo who comes from Manipur’s Churachandpur area, said, “I have been working in AMC for about ten years now. I thought of taking it up after I had a child and needed extra income.”

“In each of our families, it is for the first time that we have someone as a sanitation worker. I am happy with my job; the only problem is, the salary is small compared to the hours that we have to give to it,” said Zosianliana.

Before we parted ways, Lamremuata gathered his colleagues to pose for a photo at the AMC lobby for me. Thuamtea asked Lamremruati to stand next to him, saying, “Come, neighbours must always be together.”