'We sent multiple notices to the accused, but they have been absconding. We took the bulldozer so we could break some parts of the house to investigate inside,' police said. 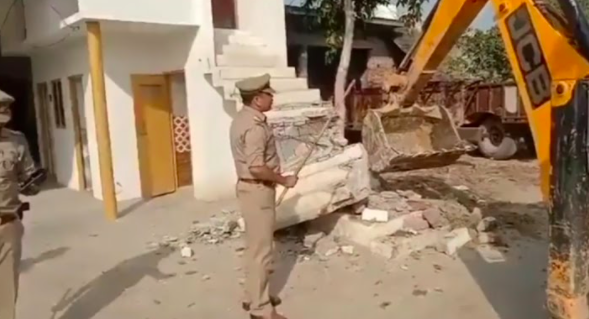 Some parts of the Saharanpur house were damaged by the bulldozer. Photo: By arrangement

New Delhi: Uttar Pradesh police on Thursday, March 30, razed parts of the house in Saharanpur in which two rape accused brothers live, claiming that they have been ‘absconding’.

The two accused have been identified as Mohammad Saalim and Mohammad Amir. They lived in Chalakpur village.

According to police, the two had been absconding since an FIR was registered against them and repeated notices to their house have gone unheeded. The brothers’ family has claimed that the FIR was only filed last week.

The station house officer of Chilkana police station, Rajesh Bharti, told The Wire that the police bulldozed some parts of the house because the “walls and gates were too elevated.”

“We sent multiple notices to the accused, but they have been absconding. We took the bulldozer so we could break some parts of the house to investigate inside,” he said.

According to the police, no one was inside the house at the time, and police left after announcing that the accused should surrender within 24 hours.

Some parts of the Saharanpur house were damaged by the bulldozer. Photo: By arrangement.

In a video from the incident available with The Wire, a police man can be heard saying, “We’ll raze the whole building if you don’t come to the police station. We’ll destroy the whole house.”

About 5-8 policemen, along with a group of men playing drums can be seen in the video. The police said that the drums were used to make the public announcement “so that the information reached everywhere.”

Sharafat, the accused’s father, has alleged that the brothers have been framed by their cousin, the complainant.

“It was a family matter, a fight between the ladies of the two houses. Both my sons were outside when this happened, one was giving an exam and the other was at the shop,” he said. The family runs a medicine shop nearby.

While the police claim that no one was at home when parts of the house were broken down, Sharafat says that one of their relatives was inside the house.

“He was disabled, and got very scared when this happened,” he said.

Talking about the damage from the bulldozer, he said, “The stairs of the house are broken, as are the electric boards, and a few cots.”

Ali Zaidi, a lawyer of the Allahabad high court, says that use of bulldozers by the police to damage an accused person’s house is not legally prescribed under the Code of Criminal Procedure.

Under the CrPC, according to Zaidi, after an FIR is filed, the police make an attempt to locate the accused. If the accused is not found, a charge sheet is filed in his or her absence.

“The court will send summons and issue a warrant in the meanwhile. And if the accused is still absconding, the court may proceed to give orders for sealing of the absconder’s property,” Zaidi said.

The existing criminal justice system in place to handle rape cases does not mention threatening or razing the houses of rape accused.

“This would be legally sanctioned only when a court approves this. Otherwise, it is just a way of showing the police’s might towards those accused who are from vulnerable or poor communities,” Zaidi said.

The Wire attempted to reach Investigation Officer Ravinder Singh through several calls and messages, which have gone unanswered. This report will be updated when Singh responds.

In 2020, the spectacle of hundreds of constables descending on Bikru village to supervise the running of bulldozers over gangster Vikas Dubey’s 10,000 square feet mansion had made news and invited questions on the effectiveness of razing a house which would possibly have contained evidence that could help police lead a case against Dubey. Dubey was later killed in an alleged encounter.

In neighbouring Madhya Pradesh, chief minister Shivraj Singh Chouhan on March 31 asked Rewa authorities and law enforcement as to “when these bulldozers will be used” referring to a rape case that occurred in Raj Niwas, a government-run guesthouse in the district.