Fifty Years of APDR: How the Civil Liberties Movement Took Shape in India

APDR's formation was a significant moment as it formally marked the resurgence of the organised civil liberties movement in India. 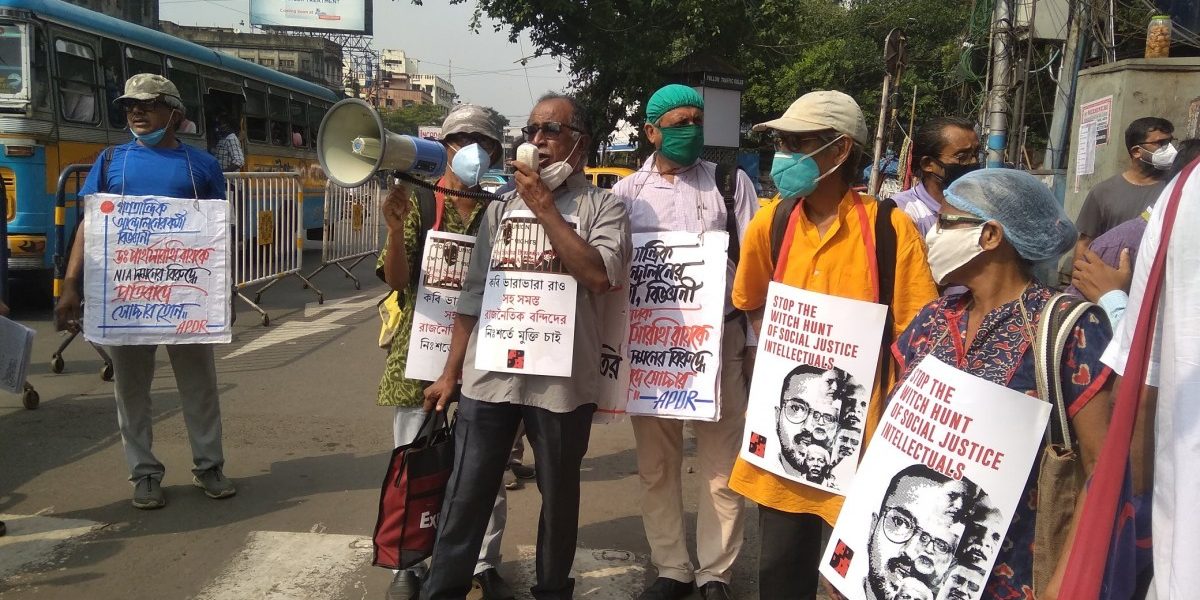 A protest organised by APDR in Kolkata against the hounding of rights activists in the Elgar Parishad case. Photo: Twitter/@sumonseng

Kolkata: On June 25, the Association for Protection of Democratic Rights (APDR), the country’s oldest surviving rights group, turned 50. Coming less than a month before the death of Charu Majumdar, the fountainhead of the Maoist movement in India, in police custody under questionable circumstances in 1972, APDR’s formation was a significant moment as it formally marked the resurgence of the organised civil liberties movement in India, which had died down by the early 1950s, especially after the beginning of electoral democracy in 1952.

In a nutshell, the 1970s was the decade when the civil liberties movement took shape in India. The initial trigger was the state’s response to the Naxalite movement (1967 onwards) – torture, fake encounter killings and illegal detentions being the key issues – and later the initiative got momentum with the imposition of the Emergency in 1975. Gradually, nationality struggles in the Northeast and Kashmir too became key issues.

Bengal was in chaos during 1967-72. Not only was there utmost instability of the government – three successive non-Congress governments with four chief ministers and three terms of President’s Rule governed the state – the same period was also the time when the Naxalite movement was born and spread to large parts of the country.

Kolkata had turned into a hotbed of urban guerrilla warfare during 1970-71. In 1970, when Bengal was under President’s Rule, provisions of the colonial-era Bengal Suppression of Terrorist Outrages Act of 1932 were revived in September and in November, the West Bengal Prevention of Violent Activities Bill got the President’s assent, giving wide powers to the police.

According to Ashoke Kumar Mukhopadhyay’s article based on the issues of the Calcutta Police Gazette, by the end of October 1970, 25 police employees had been killed and another 350 were injured in urban actions of the CPI(ML) and 1,783 CPI(ML) supporters/members were killed in Calcutta and its suburbs between March 1970 and August 1971. An incomplete list of killings in jails in West Bengal between December 1970 and June 1972, published by Amnesty International, reported 61 deaths in nine different incidents by official counts.

In this backdrop, initiatives to form an organisation for the protection of civil rights started after the Congress’s Siddhartha Shankhar Ray was sworn-in as the chief minister on March 21, 1972, in the aftermath of the most controversial election in the history of Bengal, marred by allegations of widespread rigging.

Going by all accounts of its history, Sushil Bandyopadhyay, a freedom fighter who loved maintaining a low profile but had connections with a wide range of people, encouraged a few young men to reach out to relatively known personalities to form an organisation to defend people’s democratic rights. Finally, renowned engineer and river expert Kapil Bhattacharya and his wife, Tilottama, offered them one of their rooms for using as the office.

The APDR was formed with a meeting in that room at 18, Madan Boral Lane, in central Kolkata, on June 25. It continues to be APDR’s address. The organisation started with Kapil Bhattacharya as president, Kalyani Das Bhattacharya as working president, Pramod Ranjan Sengupta as secretary and Sushil Bandyopadhyay and Baren Dam among the four vice presidents.

Many of them were men and women of their own repute. Kalyani Das Bhattacharya was a famed freedom fighter of the revolutionary stream who was one of the key organisers of the Chhatri Sangha and spent years in incarnation during the British Raj. Pramod Ranjan Sengupta had a chequered career as a revolutionary – an accused in the Dakshineshwar bomb case of 1925, he fled abroad after release, served in the Indian National Army, went to jail, joined the CPI after release in independent India, and became a key organisers of the All India Coordination Committee of Communist Revolutionaries (AICCCR) when it was formed in 1967 as a precursor to the CPI(ML). Sengupta did not join CPI(ML) though. The APDR also found support from the likes of filmmaker Mrinal Sen and actor Utpal Dutt.

The formation was announced before the media on September 9 with a 22-point declaration, which included demand for the repeal of ‘draconian laws’, recognition of political prisoners, end of police atrocities and extrajudicial killings, called upon the people to uphold their political, social and cultural rights and appealed to the relatives of the victims of political terror to get in touch with them, according to this memoir of one of the APDR’s early organisers. Units in different districts started opening soon after.

Right from the beginning, APDR maintained connections with Amnesty International. One of the first public events was a rally in March 1973 with the mothers of youths who had been extrajudicially killed by the police or jail authorities or were facing torture in jail. About 30-odd women walked a two-km distance, carrying banners, to the Writers’ Buildings and submitted a deputation with the chief minister.

Also read: Akhil Gogoi’s Claim Must be Investigated in the Interest of a Credible Rule of Law

But with the imposition of the Emergency, the APDR was banned, its publication Bharatiya Ganatantrer Swarup (The True Face of Indian Democracy) was proscribed and destroyed, and several of its members, including secretary Sanjay Mitra, were arrested. Its activities resumed after 1977. By that time, similar organisations had been formed in other parts of the country. APDR, over the following years, established coordination with several of them, often organising joint fact-finding missions to inquire into cases of alleged state-sponsored illegal killing or extra-judicial torture even outside West Bengal. It has continued to receive patronage from some of the state’s leading public intellectuals over the years.

Keeping the ‘fight against state terror’ such as illegal arrests and detentions, forced disappearances, killings in fake encounters, torture and deaths in jail, and rights of political prisoners as the focal point of its activities, the organisation has often brought to the fore issues that triggered public outcry against injustice and created political storms such as the prison torture of schoolteacher Archana Guha (1977), the disappearance of jute mill worker Bhikhari Paswan (1993) following a clash between the workers and the management, and the mysterious death of computer educator Rizwanur Rahman (2007) following police intervention in his private life. Even the Supreme Court’s landmark verdict of 2016 on returning to farmers the Singur land plot acquired for the Tata Motors came on the basis of a case filed by the APDR in 2006.

At present, it is fighting a legal battle with the state government against its decision to fell decades-old trees along Jessore road – that connects Kolkata with Dhaka – to widen it.

According to Sujato Bhadra, a history professor who served as APDR’s secretary for a long time, APDR’s achievements include raising awareness on prisoners’ rights, getting the state government to recognise political prisoners (in 1993), creating awareness against extra-judicial killings, illegal arrests and detention, and campaigns against the death penalty and laws that give the state additional powers, such as TADA, MISA and UAPA.

Fifty years since its formation, it has grown to be the state’s largest rights organisation, with a volunteer force of about 5,000 people and branches in every district of the state, according to the estimates of vice-president Ranjit Sur. Yet, APDR continues to be unregistered and unfunded. Sur said, “We have a philosophical stand against seeking the state’s sanction for what we do. This is part of democratic rights.”

According to Sur, among APDR’s major failures is their inability to ensure the release of political prisoners during Mamata Banerjee’s rule, which she had promised before coming to power in 2011.

India’s first such organisation, the Indian Civil Liberties Union, founded in 1936 at the initiative of Jawaharlal Nehru, had died down even before independence. The civil liberties movement had a resurgence during 1946-52/53 – when the country was going through the transitional process from a colony to a sovereign, independent, electoral democracy. This time, the target of the civil liberties movement was the Congress, which was accused by the communists and Hindutva nationalists of trying to suppress voices of opposition. Communists and Hindutva nationalists often co-existed in these platforms.

A Bengal civil liberties committee was formed in 1946 and, according to Kolkata Police files, it was a CPI-backed organisation. The Madras Civil Rights Union (MCLU) was founded in 1947. The Bombay Civil Liberties Union conducted a provincial conference in 1948. In 1949, an all India civil liberties conference was held in Chennai at the initiative of MCLU. But activities of all these organisations died down 1952-53 onwards.

In the ‘civil liberties phase’, he wrote, the “civil society was being mobilised, not to stand outside the state, but to make the state more responsive and recognise its constitutional obligations towards its citizens.” In the 1980s, the movement supported the claiming of rights which citizens did not enjoy under the existing system.

One crucial point of departure from the earlier phase was differentiating between violence perpetrated by the state and that used by marginalised social groups. Proponents of democratic rights mostly defended violence by marginalised people (armed agrarian movement and nationality movements) as a desperate mode to protest against systematic oppression unresolved by the system.

The third phase began with the formation of the Human Rights Forum as a result of a split in the APCLC in 1997. With HRF’s stress on “locating and condemning human rights violations at the civil societal level including those committed by radical social movements,” violence by the oppressed also comes under the movement’s scanner.

APDR, of course, has been influenced by all these debates. Did it also inherit from the earlier waves of the civil liberties movement? Could well be, because its first secretary Sengupta had also served as the secretary of the Civil Liberties Committee in 1948 and got arrested for his role in it, while APDR’s first working president, Das Bhattacharya was active in the Bombay Civil Liberties Union in the 1940s.