Residents of the Anchar locality have dug up roads and created makeshift barricades to stop security forces from coming in.

Najeeb (name changed) has pellet injuries all over his body. His friends brought a paramedic to help him, but he has not yet been to the hospital.

Srinagar: In Anchar, a volatile Srinagar neighbourhood and the epicentre of ongoing protests, local boys used forceps to take pellets out their wounds, fearful that a trip to the hospital could land them in jail.

The upscale locality in the city is aghast over reading down of Article 370, which accorded special status to Jammu and Kashmir.

According to locals, around 200 youth have been wounded in teargas shelling and pellet firing by the security forces since August 5, the day the government of India stripped the state of its autonomous status. Under Article 370, J&K had a separate flag and constitution.

In recent clashes on Friday (August 30), over two dozen youth were injured in the locality, residents said.

“The injured men fear that stepping out for treatment will bring them in the radar of the security forces,” said a local. “The J&K police have a network of men in the city hospital to keep an eye on every visitor.”

Thirty-two-year-old Najeeb (name changed) is one of the young men wounded in pellet firing by the forces.

“I was hit by pellets on Friday, during clashes in the locality,” Najeeb said, near a shrine in the area. “After I was hit, my entire body was bleeding profusely.”

A road blocked by the locals to prevent forces from entering.

The Sher-e-Kashmir Institute of Medical Sciences (SKIMS), the premier health institute in the state, is less than one kilometre from Anchar.

“I choose not to visit the hospital and stay at home, knowing full well that if I go there I will be arrested,” said Najeeb.

A group of young men took the “risk” to travel to the hospital from behind the locality, in the dark, to get a paramedic to treat Najeeb.

“He (the paramedic) removed pellets from all over my body, more than 20. He told me that many pellets have gone deep inside and would need a minor surgical procedure,” said Najeeb, a labourer and father of two children.

“My entire body is in pain, but I am getting used to it now,” the young man said.

The entire neighbourhood looks ravaged. Most of the houses have broken windowpanes, allegedly because of the security forces. These windows have now been replaced by tin sheets, ply boards and blankets to prevent teargas from entering homes.

The roads are dotted with broken bricks and walls are painted with pro-azadi and pro-Pakistan graffiti.

The roads leading to the area have been dug up to prevent the forces from coming in. Residents have also barricaded roads with tin sheets, steel rods and wooden logs. At some spots, steel mesh restricts access to the locality, described in the foreign media as “Kashmir’s Gaza”.

A man who owns a shop in Anchar and identified himself as Mumtaz said that a group of boys have “developed expertise” in removing pellets from injured people with forceps and tongs.

Mumtaz said an unusual fear of reprisal from the police pervades, to the extent that patients from the area are accompanied only by womenfolk to hospitals.

Also read: Kashmir and I: Negotiating a New Reality After August 5

His nephew Arif (name changed), a Class 12 student, is among those with pellet injuries. On Sunday afternoon, the young boy sat on the verandah of his house, applying antiseptic cream on the injuries on his legs.

“It keeps the injured tissues soft,” said Arif, who until now has avoided the hospital. “I am lucky that my eyes are safe.”

According to him, there are many others like him nursing their wounds themselves. A road blocked by the locals to prevent forces from entering.

The security forces, including J&K police and paramilitary CRPF, have tried unsuccessfully to breach the barricades on several occasions since August 5, locals said.

“They (forces) have stepped up the offensive after locals gave interviews to the foreign media about the situation and humanitarian crisis in the area,” said another young man.

On August 9, BBC reported that thousands had taken to the streets in the area to demonstrate and forces resorted to firing to quell the protests.

This was, however, denied by the government, following which the BBC released footage of the protest. 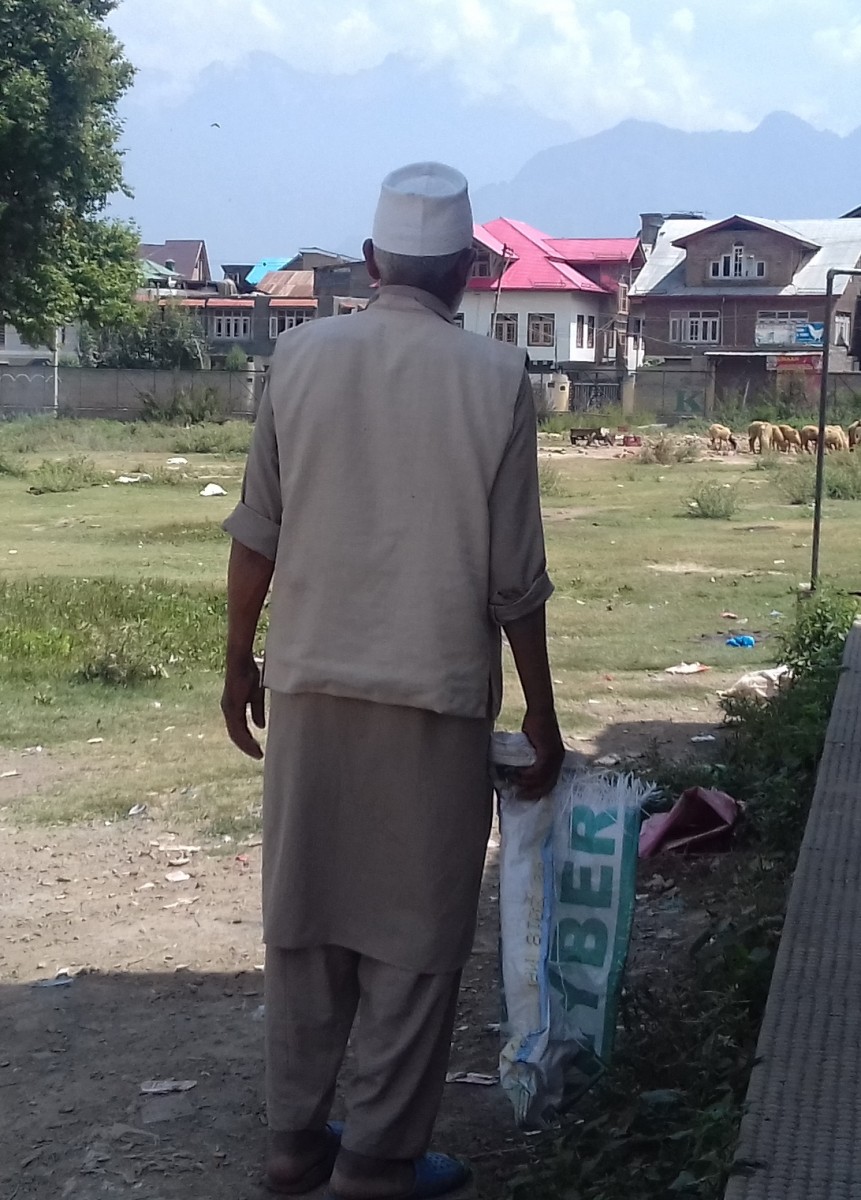 Since then, the area, with a population of around 25,000, has been witnessing frequent protests, which are often joined by the elderly and women.p

Many young boys defended the protests, saying people have the right to raise their voices against the “zulm (oppression)”.

“Today they (New Delhi) have snatched our identity. Tomorrow they can come for our land. This is not the time to sit silent,” said one of the boys, his face masked.

As dusk begins to descend, the young men take turns to maintain a vigil at key road junctions, to prevent security forces from entering the locality behind Nigeen Lake.

“They (the forces) have tried to come in on at least four occasions in the past week, but we pushed them back,” said a young man from Dar Mohalla. “We have hardly slept all these nights, even when we are not out to keep a watch. You never know when situation could turn ugly.”

According to him, three youth from the locality were arrested on August 9, after the protest. “Since then, our boys have stopped moving out, fearing arrests.”

Though the last clash between locals and the forces took place on Friday, the air is still filled with tear gas smoke and pepper gas.

“I will show you the quantum of ammunition they (forces) fired in the locality that day,” said another young.

Behind the local mosque, they have piled up the shells and canisters which were allegedly fired by the forces.

“Here it is,” he said, pointing towards the heap of canisters. “They are all kinds of shells – teargas, pepper gas, chilli grenade and PAVA shells. You will find such collections in every locality here.” 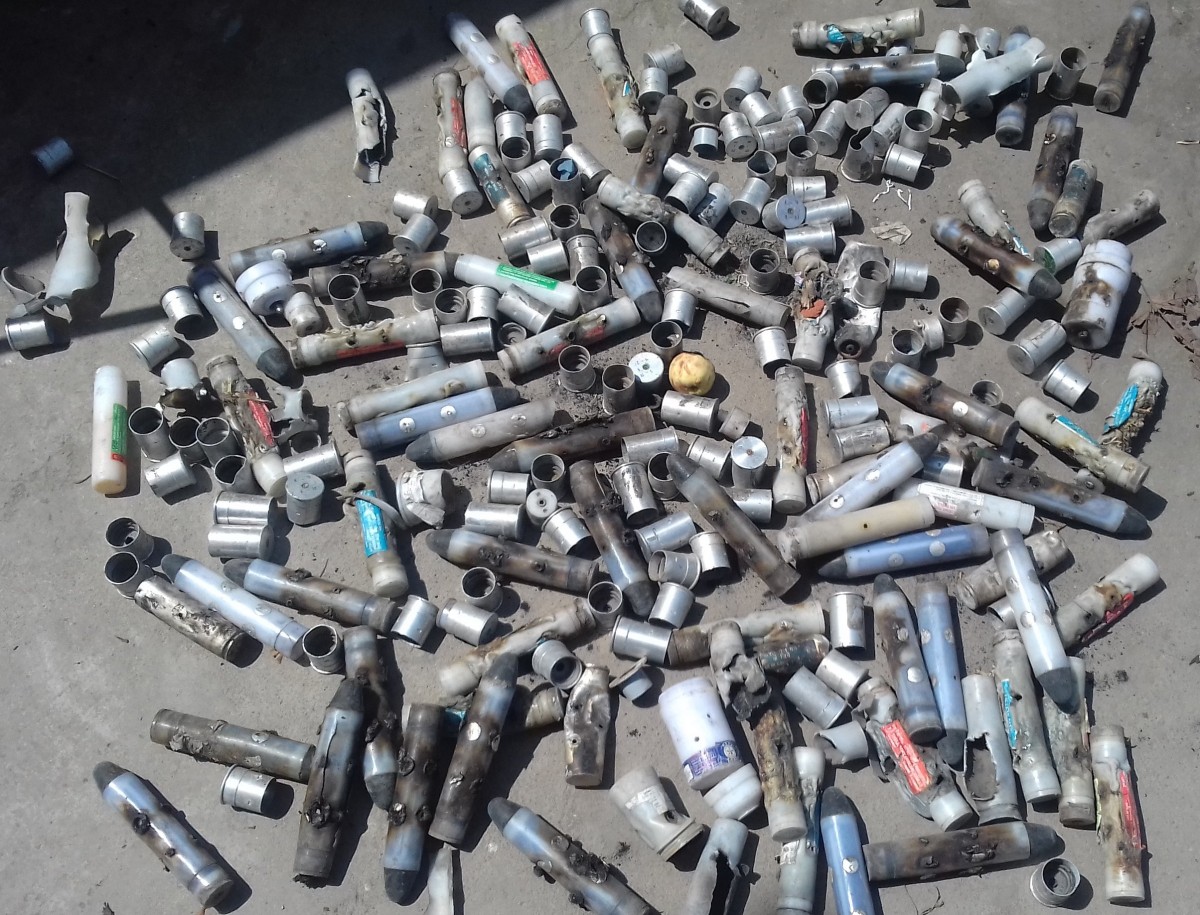 Locals have collected canisters of teargas shells and other ammunition allegedly fired by the forces in the locality.

According to the residents, the elderly and children have now developed “health issues” owing to the tear smoke shelling that frequently fills the air.

“It is becoming very difficult to live here,” said Manzoor Hussain, a middle-aged man. “But we know that moving out is too risky. They (the forces) are waiting for us to take one wrong step. This fight is about patience, too.”