“The NIA knows that he was voicing views against the government and corporate groups, and hence he was framed in the case." 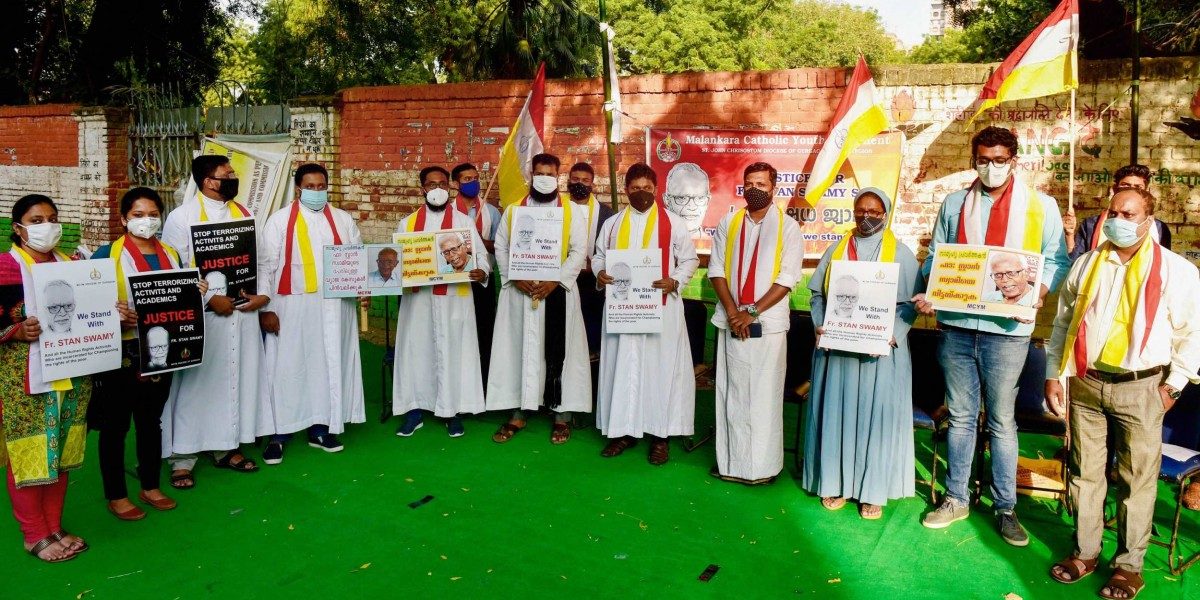 Kottayam: The Jesuit congregation is hopeful that the case against 83-year-old priest Father Stan Swamy, a member of the Jamshedpur province of the Society of Jesus congregation, arrested by the National Investigation Agency (NIA), will be shattered in the court, as there is no evidence to establish that he was in some way connected with the violence against Dalits at Bhima Koregaon. The imprisoned priest’s close associate, Father Joseph Xavier, alleges that Swamy hasn’t visited Pune for the last 15 years.

“He actually came to know about the Bhima Koregaon violence from newspapers. Stan has absolutely no connection with the Maoists movement and is against the idea of armed struggle. He believes in constitutional mechanisms,” says Father Xavier, director of the Indian Social Institute, Bangalore. He alleged that the NIA’s case against Swamy was entirely fabricated. “The NIA knows that he was voicing views against the government and corporate groups, and hence he was framed in the case,” Father Joseph alleges. “He is only the last among the 16 persons arrested under various charges.”

Father George Pattery, the Jesuit Provincial for South Asia, told The Wire that the congregation is condemning the arrest of the 83-year-old priest. He said that the arrest of Father Swamy is not an isolated incident, but part of a larger plan. “However, the mission of the congregation will not be affected. It will continue,” he added.

Father Swamy was vocal on the discrimination against tribal and Dalit communities in Jharkhand. He was involved in a movement with the tribals against the Chiria iron ore mine covering 3,276 hectares in the Dubil adivasi village in Saranda forest of West Singhbhum district in Jharkhand. He was also at the forefront of the movements against the Koel Karo dam project and the ‘Nethrahat’ firing range project, which the army had chosen for the firing practice and was to displace thousands of villagers including many tribal hamlets. The army withdrew from the project later after massive opposition from the local population. He was also involved in the upliftment of the Ho, Munda, Santal, Oraon and Khadia tribals and Dalit groups. “He had taken up the land alienation issues of the tribals. This has upset the government,” says Father Chacko P.A., a Jesuit priest who was an associate of Swamy’s in Jharkhand. Chacko says Swamy is a responsible priest who adheres to the rules and regulations of the Jesuits.

Father Chacko adds that Swamy was helping poor tribals jailed on charges of being suspected Maoist informers or because they had resisted the takeover of their land. Several initiatives, Father Chacko added, such as the research study conducted by the Bagaicha research group ‘A study of undertrials in Jharkhand’, were the byproduct of Swamy’s activities.

According to the study, about 46% of the undertrials studied belong to the age group of 29-40 years, and 22% of them are between 18 and 28 years old. Tribals or Scheduled Caste constitutes 69% of the respondents. About 42% of the respondents belongs to the Sarna tribe, 31% were Hindu, 25% Christians and 2% Muslims. The study says that a large number of fake cases under the draconian 17 CLA Act, UAPA, and the anti-state sections of the IPC have been foisted upon the tribals, Dalits and other backward castes in various parts of Jharkhand particularly within last decades.

Father Swamy, who was the director of the Indian Social Institute, Bangalore for several years established ‘Bagaicha’, a Jesuit social research and training institute at Namkum near Ranchi. He was a proponent of the implementation of the Panchayats Extension to Scheduled Areas (PESA) Act, 1996, which gives decision-making powers on local issues to panchayats.

An officer of the NIA interrogated Swamy several time – on July 25, 27, 28, 29, 30 and August 6 – consistently asking him various queries related to the Elgar Parishad case, operation green hunt and other personal details. In the interrogation, Swamy told the NIA officer that he has never been to Bhima Koregaon in his life.

The NIA alleged that they have retrieved a file named ‘Earth summit’ from his computer, which details the communication between two Lok Manch workers. The letter which the NIA allegedly retrieved says, “Since the Indian state is becoming more and more fascist, we need to join forces with banned groups to counter the state fascism; (2) in order to do this we will need funds, at least some $ 6-10 million; and (3) all these works would be done out under the direction of father Stan.” However, Swamy dismisses this as rubbish. “I disown this letter and communication. It is a fabrication, stealthily inserted into my computer,” he alleged.

Swamy, who hails from Virahalur village near Trichinapally in Tamil Nadu, suffers from diseases including Parkinsons. In the 1980s, he was deputed as the director of the Jharkhandi Organisation for Human Rights. He established Bagaicha in 2006 under the leadership of the Jesuit provinces of Ranchi, Jamshedpur, Dumka and Hazaribaghand for training, research, campaign and advocacy work concentrating on the upliftment of tribals.