'Your administration comes to office at a time when minority communities across India are in peril,' notes the letter, urging the US President to act. 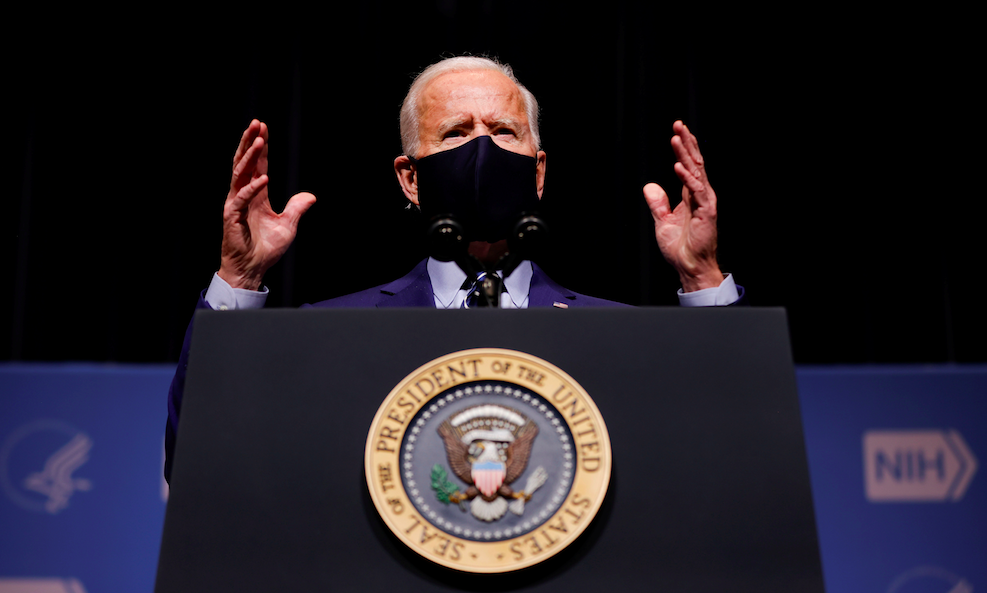 New Delhi: More than 40 lawyers of south Asian descent have written an open letter to US President Joseph Biden, asking him to take note of the farmers’ protests and the methods of repressing it taken up by the Centre.

Noting the scale of the protests and the way the laws against which they are being done were rushed through parliament, the statement goes on to highlight how the Narendra Modi government has been keen to repress the peaceful protests by violent and illegal means, including arrests and censorship.

Also read: With Faith in India’s Institutions at Its Lowest, Citizens Must Fight Back

The letter highlights the infringement of human rights in the cases of labour activist Nodeep Kaur who was tortured in jail, farmer Navreet Singh who was killed during the protests on January 26 and a doctor Swaiman Singh who was allegedly beaten while treating protesters in New Delhi.

The letter notes that not only has the state acted through mass arrests, it has also attempted to cripple communication of information by shutting down internet, limiting social media reach and by slapping cases on journalists.

Citing detailed examples of sustained harassment of critics and minority communities, the statement urges Biden to act in his capacity to denounce, condemn and raise the issues at the United Nations.

The full text of the letter and the list of its signatories is below:

We, the undersigned, are civil and human rights lawyers of South Asian descent living in the United States. We are writing to express our grave concerns about the ongoing legal abuses and violence being committed against the farmers of India, and urge you to call on India to respect the constitutional rights of protesters.

As you know, since November 2020, farmers across India have been protesting laws that threaten their personal livelihoods, compromise their agrarian cultures and communities, curtail their legal remedies, and jeopardize the food security of India. These laws were rushed through during a pandemic without adequate debate or any consultation with key stakeholders, including the farmers, to the benefit of a few corporate interests.

This unfair and undemocratic process led to a nationwide mobilization that is now widely considered to be the largest protest in recent Indian history. Millions have come together in solidarity, spanning regions, faith, and class. The movement is led by a broad-based coalition of farmers, labour unions, and civil society, and it grows in spirit and momentum every day.

The Modi government and security forces have responded to this peaceful assembly with violence, unlawful detention, and censorship. We call upon your administration, as well as elected officials, media organizations, businesses, and civic and faith leaders to unequivocally condemn these actions and provide messages and actions of solidarity aligned with the demands of the farmers. 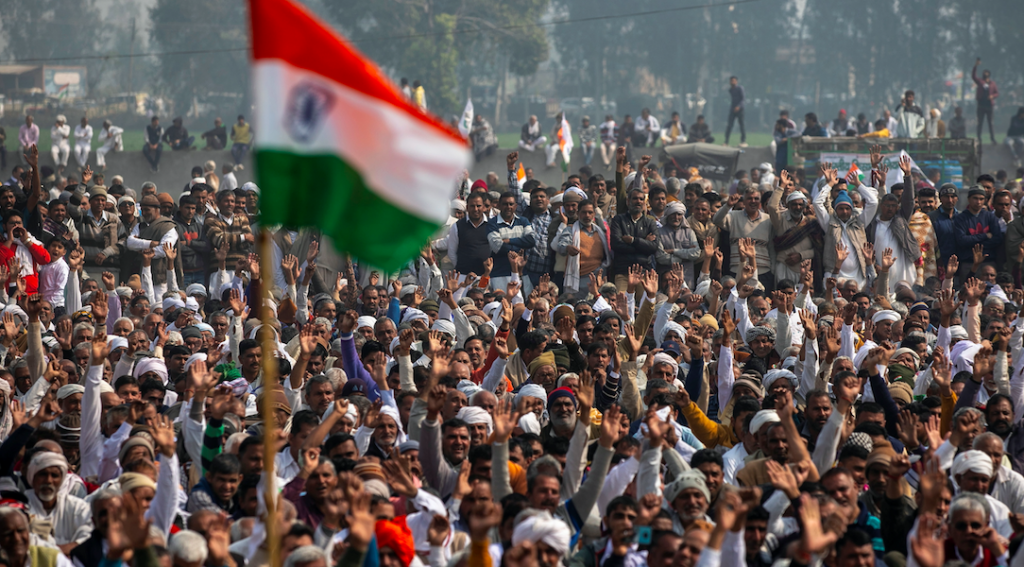 People attend a Maha Panchayat or grand village council meeting as part of a farmers’ protest against farm laws at Kandela village in Jind district in the northern state of Haryana, India, February 3, 2021. Photo: Reuters/Danish Siddiqui

In recent days, security forces have attacked protesters, stood by as plain-clothed assailants have assaulted protesters, and failed to protect those experiencing violence.

On January 12, local police in Haryana arrested Nodeep Kaur, a Dalit labour rights activist, on false charges of unlawful assembly, extortion, and attempted murder. Her sister visited her the day after her arrest, and Nodeep reported that police officials had brutally beaten and sexually assaulted her. Nodeep’s family requested a medical report, but its status is unknown, and police continue to detain her.

On January 26, eyewitnesses said that police officials shot Navreet Singh, a 25-year-old farmer from Uttar Pradesh, causing his tractor to overturn seconds later. Navreet’s family and several medical experts believe that the bullets caused his death. That same day, a team of medical professionals led by Dr. Swaiman Singh, a U.S. citizen from New Jersey, was badly beaten while providing medical aid to protesters in Delhi. The staff-wielding officers also broke the arms of three other doctors and caused other significant injuries. In another incident that day, a pro-government mob descended onto a protest camp in Singhu, stoned the protesters, and uprooted their tents. Police responded but witnesses report that the violence was directed at the farmers, not their aggressors.

Police, military, and paramilitary forces have since amassed around the protest sites and erected fortifications with large metal spikes,capable of inflicting grievous bodily harm. These security forces are emboldened by an entrenched culture of impunity. During the anti-Sikh pogroms of 1984, which was facilitated by the action and inaction of the Delhi Police, state-sponsored mobs murdered thousands of Sikhs. And security forces have committed decades of atrocities in regions such as Punjab and Kashmir.

Many of the farmers now gathered around Delhi are Sikhs from Punjab and are at heightened risk of violence. The government of India, by all accounts, seems prepared to escalate its use of force.

Lawyers, human rights organizations, and media outlets report that security forces have arrested several hundred protesters, including 200 people on February 4 alone, some of whose whereabouts remain unknown. India’s counter-terrorism body, the National Investigation Agency, has issued summons to dozens of individuals, including farmer leaders, union leaders, journalists, and those who have been providing aid to protesters, such as free meals.

In the state of Uttarakhand, police have said that passport applications could be denied for “anti-national” social media posts, and in Bihar, police have warned that citizens could be banned from government employment if they support or participate in the protest. Leadership in both states are loyal to Modi.

The Indian government has long used the rhetoric of “anti-terrorism” and “national security” to justify its repressive measures and this time is no different. Authorities are invoking draconian laws such as Section 144 of the Indian Penal Code, which prohibits the assembly of five or more people, and the National Security Act, which allows the state to preemptively detain individuals for one year on the grounds of national security. Many fear lengthy or indefinite detention, a well-founded concern. Twenty-one protesters and activists who campaigned against the Citizenship Amendment Act (CAA) in Delhi, for example, have been in custody for more than a year under the Unlawful Activities (Prevention) Act and have repeatedly been denied bail. Authorities may also try to manufacture evidence against the farmers and protesters. Just last year, authorities coerced detainees to lie about the anti-Muslim pogrom in Delhi and wrongfully implicate human rights defenders. 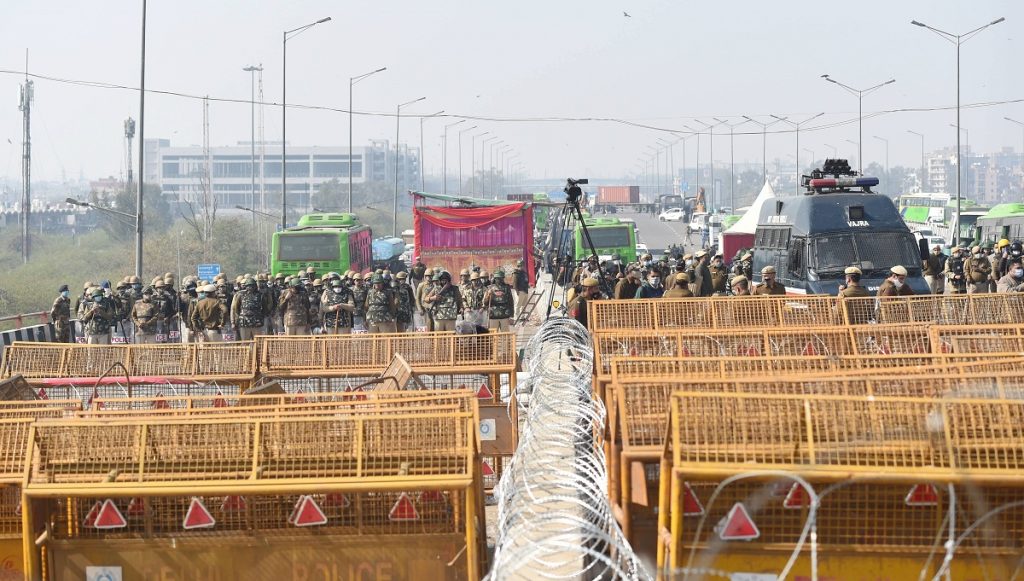 India has suspended mobile communications and internet services in and around Delhi several times in recent weeks. Outages continue in some areas, and will likely be reimposed in others. India leads the world in internet shutdowns by a wide margin.

Authorities have charged several journalists who documented the police violence, including for reporting on social media that Navreet Singh was shot dead by police.

Vinod K. Jose and Siddharth Varadarajan, the executive editor of The Caravan magazine and the founding editor of The Wire, respectively, both face charges, as does the 75-year-old Mrinal Pande, the first woman editor of a national newspaper in India, and Rajdeep Sardesai, a veteran TV anchor. In addition, Mandeep Punia was arrested on January 30 for posting a video on Facebook documenting mob violence targeting protesters in Singhu. They detained him for several days, stripped and beat him, and ordered him to stop reporting.

India ordered Twitter to suspend the accounts of journalists and news organizations reporting on the farmers’ protest and threatened to prosecute if the company failed to comply with their demands. Dozens of accounts, including the account of The Caravan, were subsequently suspended, only to be reinstated after Twitter informed the government it considered the contents to be acceptable free speech.

There is a general fear in India today that any type of criticism can lead to arbitrary detention or worse. Munawar Faruqui, a 30 year old Muslim comic, was arrested before he even cracked a joke because Hindu nationalist elements claimed his remarks would “wound religious feelings.” Five others were arrested alongside Munawar: Edwin Anthony, Prakhar Vyas, Priyam Vyas, Nalin Yadav, and Sadakat Khan. 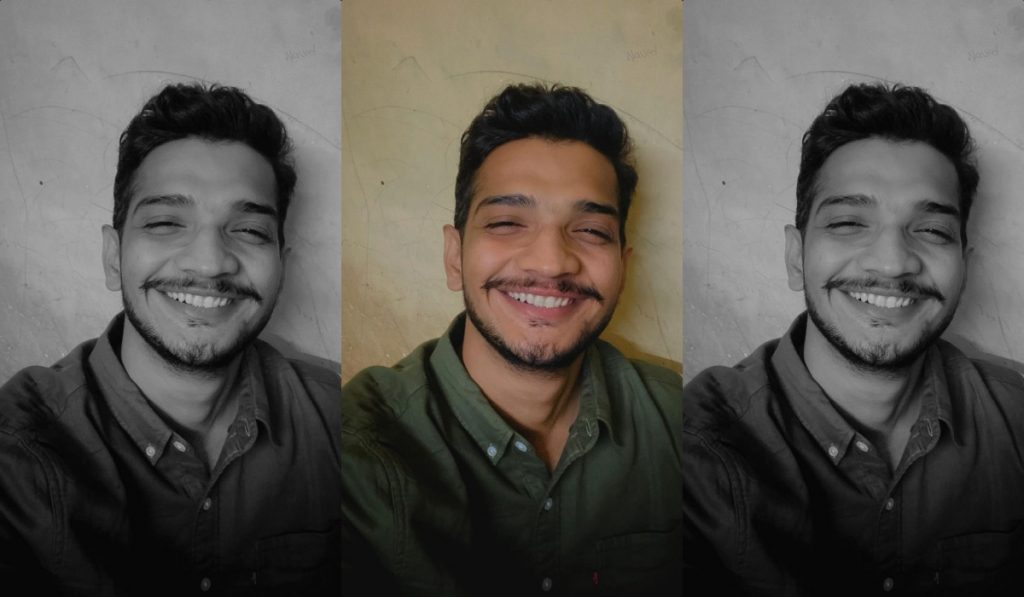 A Pattern of Hostility & Prejudice

Your administration comes to office at a time when minority communities across India are in peril.

The recently signed CAA openly discriminates against Muslim migrants on the basis of faith. The National Register of Citizens, the sister effort to CAA, is a policy of forced displacement, and will render millions vulnerable to statelessness.  The Indian government has pursued a policy of mass deprivation in Jammu and Kashmir, stripping the people of their right to autonomy under the Indian constitution.

The recent farm laws and systematic persecution of farmers and those who support and document their plight is a continuation of this broader agenda. Sikh farmers from Punjab, a state that will be disproportionately impacted by the laws, have been maligned as religious extremists and separatists.

These laws, policies, and practices are rooted in a long history of impunity, failed democratic institutions, and a supremacist ideology – Hindutva nationalism. The BJP and Prime Minister Modi want to create a Hindu state, where Hindus enjoy a privileged status, and minorities, especially Muslims and Dalits, are second-class citizens. The long arm of Hindutva nationalism has extended to the United States as well, where they are attempting to rewrite descriptions of Hinduism in textbooks, fund university endowments, influence overseas elections, and malign and intimidate activists and influencers who support the farmers.

We Urge You to Act

India’s actions violate not only the rights enshrined in its constitution, but also fundamental international human rights norms, including the rights to life, liberty, and freedom from arbitrary arrest and detention, peaceful assembly and association, and expression and opinion.

There is now a high risk of gross human rights violations. We respectfully urge you to:

As civil and human rights lawyers who are committed to advocating for the dignity and humanity of all people, we will not be silent as India continues down a path of abandoning fundamental rights and pursuing policies of marginalization, exclusion, discrimination, and violence. We express our solidarity with the farmers who are fighting for a living wage, engaging in peaceful dissent, and facing arbitrary arrest and violence. We lend our support to lawyers and legal workers in India who are playing critical roles as first responders, jailhouse lawyers, and constitutional defenders. And we urge your administration, and all people of conscience, to raise their voices in solidarity and support.