Farmers Protest: Why Are Some ‘Liberals’ Invoking the Legacy of Margaret Thatcher?

In her home country today, derisive references to Margaret Thatcher are far more common than benign ones. But in India, time seems to have stood still since her glory days.

Fully 30 years after she was eased out of her job by her own party, Indian admirers of Britain’s Iron Lady are sending up fervent prayers for Margaret Thatcher Redux. Hacks are flooding the media space with froth as they sing paeans to the dear departed lady. (Their ardent hope is to be delivered soon from the ignominy of too much democracy.) And they don’t want their readers to remember that, alone among Britain’s many Oxford-educated prime ministers, it was Thatcher whom her alma mater refused to award an honorary doctorate. She was still very much in power, and her lobbyists had left few stones unturned in their efforts to secure for the PM that nearly routine honour from Oxford. And yet she was snubbed. And what a snub it was! The meeting of ‘Congregation’, Oxford’s governing assembly, convened to consider the proposed degree to Thatcher, was the most crowded assembly of that august body that most of those present could remember. And what followed was a wounding blow to the PM:

“The ‘No’ exit at Sir Christopher Wren’s Sheldonian Theatre was jammed like a London Tube station in the rush hour long after the ‘Aye’ door had taken its last voter. Dons and senior administrators decided by 738 votes to 319 against giving Mrs Thatcher the scarlet and crimson gown and velvet bonnet of a doctor of civil law.”

For the record, the only other important Oxonian to be denied that honorary degree in the 20th century was Z.A. Bhutto – for his dreadful human rights record. Interestingly, Bhutto’s report card at the Congregation hustings was way better than Thatcher’s: 191 for and 239 against. Indeed, in Thatcher’s case, a banner had even been slung across Somerville, the PM’s old college at Oxford, saying, “No degree for Mrs Thatcher”, an honour denied to the Pakistan PM. About Thatcher’s abortive degree bid, The Guardian had noted at that time that

“(t)he scale of the PM’s defeat was due to a huge turnout by scientific and medical dons, who rarely take part in academic debates but have been roused by the effects of government economic curbs on their research.”

That memorable put-down, delivered to a sitting PM, has since entered Oxford’s folklore. Indeed, in her home country today, derisive references to Margaret Thatcher (a ‘Marmite’ figure, ‘La Pasionaria of Privilege’, ….) are far more common than benign ones, even among conservative circles. But in Britain’s former colony India, time seems to have stood still since Thatcher’s glory days. So we have a senior English language journalist grandly talking about Narendra Modi’s ‘Thatcher or Anna moment’, even as the Indian PM finds himself besieged by tens of thousands of farmers protesting at Delhi’s borders against his government’s farm sector ‘reforms’. The Anna moment, in this journalist’s book, is a proxy for the ‘Manmohan Singh moment’, by which is meant capitulation and surrender: isn’t Singh famous for how he caved in to the Anna Hazare ‘movement’ against corruption? By contrast, the Thatcher moment

“would mean when a big, audacious and risky push for reform, that threatens established structures and entrenched vested interests, brings an avalanche of opposition. (Emphasis added)”

So Modi has a stark choice to make: either retreat like Manmohan Singh did under pressure, or ‘push farm reforms in Margaret Thatcher style’. And ‘…how Modi answers this … question will determine national politics going ahead’.

So far, so good. The scribe is stating his case. It is clear on which side his sympathies lie, but that can hardly be faulted. Indeed, it is a perfectly acceptable opinion piece by a journalist – up until this point. But he signs off with an extraordinary flourish:

“Our wish, of course, is that he [Modi] will choose Thatcher over Anna. It will be a tragedy if even Modi were to lose his nerve over his boldest reform.“ (Emphasis added)

This, to me, reads more like a political manifesto than a journalist’s despatch. (Note how the whole news portal has been deftly subsumed in that clever ‘our wish’. The message is: here are a couple of hundred votes to give you strength. Good luck and godspeed!) And this is not all. Elsewhere in the piece, even as he grudgingly concedes that “farmers blockading the capital make for really bad pictures”, the writer doesn’t forget to tell us why this is bad optics: after all, “these aren’t nutcases of ‘Occupy Wall Street”.  This speaks to visceral contempt for organised mass action, the kind of contempt that underlies the now-famous ‘Hard work versus Harvard’ witticism. The contempt is targeted in both these smart quotes at a common enemy: the Khan Market Gang (yes, gang with an upper-case G), or the tukde tukde Gang, if you like. And this is not a solo journalist waxing eloquent about the Thatcher/Modi likeness. Others are piping up, all of them in the same strain: this is the Modi government’s make-or-mar Thatcher moment, and Modi can let go of this propitious moment only at his own – i.e., his reforms’ – peril. A quick scan of the last few days’ opinion pieces in various news media gives me access to another ‘journalistic’ tirade on another news portal against “protests from a select group of farmers, who have received a megaphone from the domestic and international press, as well as opportunistic support from opposition parties, which finally see a possible wedge issue to use against Modi’s government…”. (Megaphone, indeed! What happened to the sundry media platforms who were proving to be so loud a megaphone in the protesters’ hands that these same protesters were obliged to boycott them wholesale?) And this writer proudly reminds us that the ‘Modi’s Thatcher moment’ tagline had occurred to him as early as March 2015 when he penned a learned essay on this same subject. He also closes his recent piece with this fond wish:

“Modi in 2020 is a seasoned, powerful leader. Let’s hope he fulfils the promise of the moment.”

Neither of these men deems it necessary to argue their – i.e., Modi’s – case. It must be self-evident to all but the Gang, so. But probe it a little – and you will know that they are Crusaders against that pernicious phenomenon called subsidies. I remember having once watched the better-known of these two journalists in a TV discussion in which he frankly confessed that he found subsidies ‘vulgar’, antediluvian. Of course, he was referring only to the poor men’s subsidies – those attached to food and cooking gas – and by no means those which are reserved for the rich ( tax breaks, for example, which are meant to unleash ‘corporate animal spirits’).

So, can we take a quick look at their iron-clad case against the one subsidy that is troubling their conscience most at this point? We will necessarily need to compare these subsidies with those given by rich countries to their farmers. Surely, developed (and efficient) economies don’t entertain such antiquated, fossilized handouts as subsidies? And if they do, these must be no more than a trickle while the privileged protesters at Delhi’s borders wallow in a whole sea of them?

In a study compiled by professor Bharat Rameshwaram of IIT Delhi in March 2019 for the Fifteenth Finance Commission, he puts annual Central government subsidy to farmers at Rs 1,205 billion: made up of fertiliser subsidies (Rs 700 billion), price support (Rs 240 billion), credit subsidies (Rs 200 bilion) and crop insurance subsidy (Rs 65 billion). Parallelly, there are subsidies offered by the state governments which together work out to Rs 1,140 billion: power subsidies (Rs 900 billion), irrigation subsidies (Rs 175 billion) and crop insurance subsidies (Rs 65 billion). In addition, the state governments in 2017-18 had announced farm loan waivers of the order of Rs 1,220 billion. In all, then, farm subsidies add up approximately to Rs 3,500 billion, or to 2-2.25% of the country’s GDP. They also form about 20% of aggregate farm income, annually. Another study by the Centre for WTO Studies (part of the Indian Institute of Foreign Trade) estimates India’s per-farmer aggregate domestic support in 2018-19 at $282 (roughly Rs 20,000).

Also Read: Are the New Agriculture Ordinances an Extension of the WTO’s Agenda?

A closer look at the US numbers will do no harm. Why analyse an outlier, you ask? Well, isn’t the US the neoliberals’ Mecca for all seasons? Indeed, the senior journalist we are referring to here had made quite a name for himself when, in 2003, he publicly counselled Vajpayee, India’s PM then, to send Indian troops to Iraq – as part of a George Bush-Tony Blair-Vajpayee coalition. His rationale was simple: if India could once ‘prove her bona fides as a serious democracy’ by joining that holy war, no one would ever again manage to drive a wedge between her and the US. Alas!—Vajpayee was less than enchanted by the advice. But surely Modi can be trusted to do what Vajpayee couldn’t?

So, what more do we know about what the US does for its farmers? An article published by Taxpayers for Common Sense on September 3, 2020 sheds some light. Direct US government payments to farmers during the current year are of the order of $37.2 billion. Plus, the Commodity Credit Corpn is spending another $14 billion. Together, these subsidies ($51.2 billion) form 43.8% of net farm income of the country. (Contrast this with India’s 20%.) And this is far from being the whole story. The HEROES Act passed in May 2020 provided additional COVID-19 funding of $16.5 billion to agriculture. And, in the second tranche of the COVID-19 funding – by way of the HEALS Act which awaits Congressional approval – another $20 billion in direct payments (cash subsidies) to the sector have been proposed. If this corpus is released, aggregate US farm sector subsidies this year will top $88 billion (or, Rs 6,600 bn, approximately, or roughly twice the government support to farming in India.) And that sum will cater to a community whose size is a little over 1% of India’s farming roll strength. Vulgar? Of course not. It’s the US, stupid!

And yet, at the WTO, the developed economies regularly give India a piece of their collective mind on her ‘undue’ support to agriculture. How this scandalous state of affairs persists to this day – indeed, how much more heat is likely to be turned on India on this count in the coming years by the rich countries – is a story for another day. But there can be little doubt that India’s governmental support to agriculture is a measly fraction of what richer countries routinely give to their own farmers. 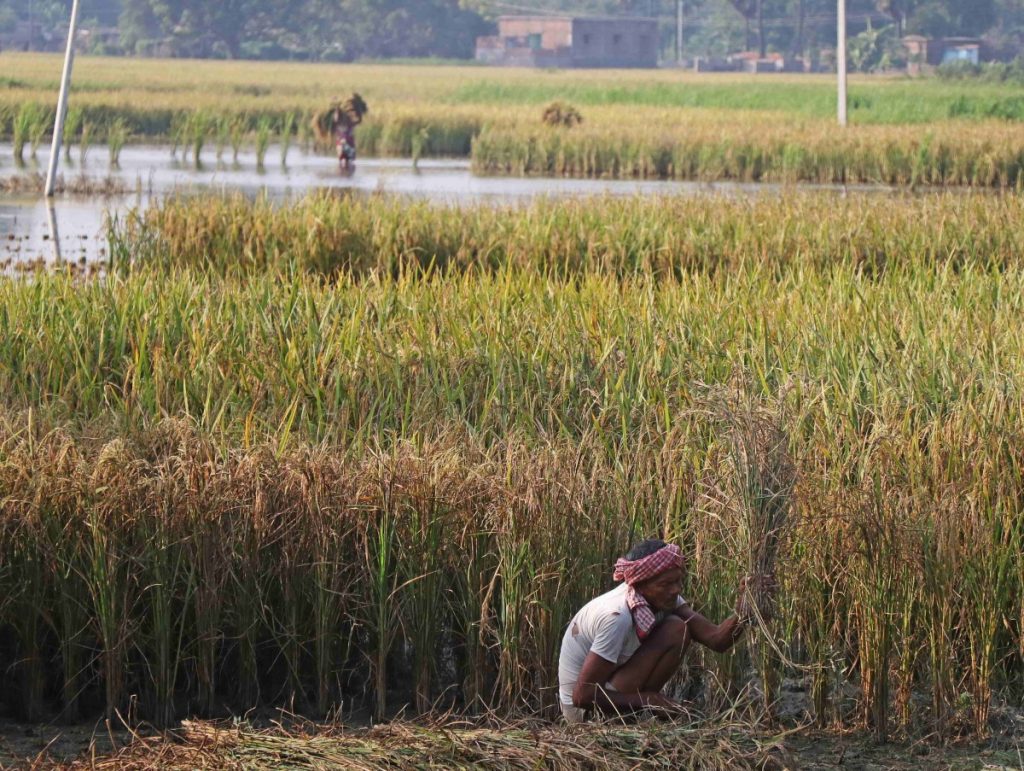 So, are our anti-subsidy crusaders ill-informed? I don’t think so. Their problem is not informational, but ideological. To these zealots of neoliberalism, all support to the ordinary citizen is odious, and poor subsidies are pure sacrilege. Such subsidies, they are convinced, create “the culture of dependency” (Thatcher’s words) while subsidies to the wealthy are ‘productive’ support. No amount of additional information will disabuse neoliberals of these prejudices.

Margaret Thatcher once famously said there was no such thing as society: there were only individuals and there were families. In much the same breath, she added, “(P)eople have got the entitlements too much in mind without the obligations”. Her epigones in India, as elsewhere, have learnt these lessons by heart. As more farmers join the ongoing agitation in and around the national capital, therefore, we can be certain to witness more smarmy invocations of the spirit of the woman who had helped introduce to the UK what one commentator memorably described as ‘casino capitalism’.