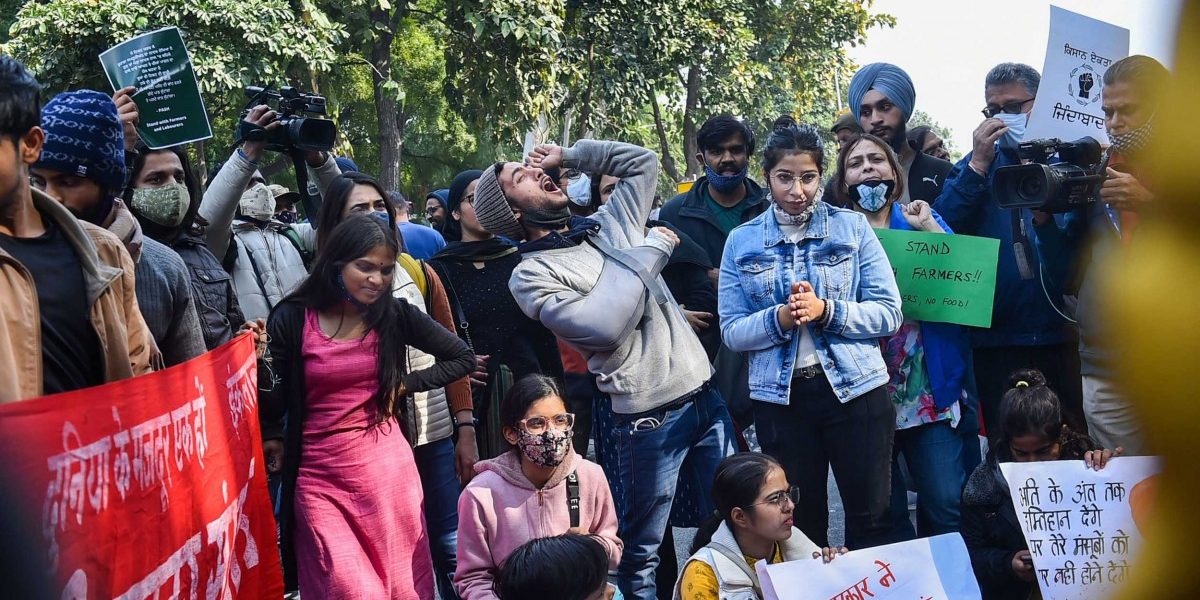 It is the morning after Rakesh Tikait’s emotional outburst on national television. In response to his call, thousands of farmers across Uttar Pradesh, Punjab and Haryana have travelled through the night, and the stretch of highway that only had a few hundred farmers left now has a few thousand in attendance.

The langars that had been dismantled in anticipation of impending violence the night before are now being set up again. A young Sikh child is helping his mother serve out tea. A smiling Sikh gentleman overseeing the seva says, “It is good for children to learn to serve others at a young age.”

Surrounded by a crush of supporters, Tikait is standing on a makeshift stage telling the farmers that this movement will remain non-violent, come what may. He pauses to tell the crowd to make room for the journalists in the audience, and accepts a bottle of water from a freelance reporter. Then, in an obvious reference to the water supply getting turned off at the protest site the night before, he tells the audience, “Patrakaar bhi hamay pani de rahe hain (Even the journalists are giving us water)” and takes a swig.

The audience claps and cheers as Tikait finishes his speech. Two young women and a young man are standing together near one of the bigger langars. One of the young ladies is holding up a sign with the words,

(The oppression of power will be met by cries of revolution from every corner of the land.)”

Watch: What Brought The Farmers’ Protests Under Global Spotlight?

Two of them are students of Class 12 from a well-known private school in the area and the third is a first-year university student who has passed out from the same school.

Anushka, the college student, says, “People are quick to make judgments sitting in the comfort of their houses and speculate about what is right and what is wrong. That’s why we came here to see and decide for ourselves, considering how much the godi media lies.”

Mallika, one of the class 12 students adds, “99.5% of the farmers on seven of the nine agreed-upon routes were completely peaceful. But the media only focused on the havoc that some fringe elements created, ignoring the fact that this protest has been completely peaceful since day one. What about the 170 people who have died? Why isn’t anyone talking about them? When the government says they will postpone the laws for 18 months, it’s a bit like saying they won’t take their livelihoods away now, they will take them away 18 months later.”

Her classmate, Anjney, says, “The farmers have been mistreated by every single regime in India and it is high time they were given their due. Since we as students have been so vocal about this on social media, it behooves us now to also come and be physically present with the farmers.”

But they are also aware of the fact that many of their peers aren’t present at the protest. Anushka says simply, “It’s called privilege. My friends who belong to upper caste ‘good business families’ simply couldn’t be bothered. You will care about politics only if somewhere your well-being is at stake.”

Mallika, who is a student of history, continues, “While people in Nazi Germany were throwing parties in the comfort of their homes, their next door neighbours were being herded off to concentration camps. The signs of fascism that were visible then are visible now – the control over mass media, the manipulation of the masses, the mainstreaming of the fringe elements, and the relentless demonisation of the minorities.”

She added that many of the friends whom she has grown up with had no problems hanging out with Muslim kids till “religious politics” kicked in, starting 2014.

Asked if her parents know she is at this protest, Mallika says, “Yes they do. I had to convince them to let me go, and it took a bit of negotiating. They are understandably concerned for our safety, of course, seeing what happened to the students at JNU and Jamia, but if we don’t stand up for these farmers and for our democracy, who will?”

Asked what has motivated her to walk a different path than many of her peers, and why she has chosen to be vocal at a time when many have chosen to be quiet, Mallika thinks for a second and says, “My parents. They have taught me from childhood to think for myself and look at a human being as a human being instead of as a member of a religious community.”

The turning point in her life, she says, came two years ago when her friend’s father was shot dead in Bulandshahr while engaging a violent mob of cow vigilantes. Her friend’s father’s was Inspector Subodh Kumar Singh.

At the time of this tragedy, ANI quoted Singh’s son as saying, “My father wanted me to be a good citizen who doesn’t incite violence in society in the name of religion. Today my father lost his life in this Hindu-Muslim dispute, tomorrow whose father will lose his life?”

It was then that she decided that the time for acquiescence by silence was over.

Mallika’s story reminded me of another young man’s whom I met a fortnight ago at the Shahjahanpur border protest site, 120 km away from Ghazipur. His name is Harteerath, and he is barely a year older than the three young people I have just met.

Harteerath is a quiet and soft-spoken 19-year-old Sikh who, along with his family, friends and an NGO that he is a part of, has been setting up “tent cities” and giving out rations and clothes to the farmers at Ghazipur, Tikri, Singhu, Rewari and Shahjahapur. His team has also set up a ‘Kisan Bazaar’ at Shahjahanpur, where farmers can come and get woollens, warmers and toiletries – free of cost.

Asked if he had always been this altruistic, Harteerath laughed and said, “Hardly! I used to be a brat who only wanted the latest and best of everything.”

It was a trip in 2013 to the Sikh pilgrimage spot, Hemkunt Sahib, in the Garhwal Himalayas, that changed his outlook. That was the year torrential rains and flash floods in Uttarakhand claimed the lives of hundreds and displaced thousands. Harteerath and his father were caught in those floods and barely escaped with their lives. He said he saw the river wash away the helicopter they had just been in, with the pilot still in the cockpit. Harteerath and his father spent the next several days in an army camp, sharing a sleeping bag between themselves. He was only 12 at the time.

That harrowing experience made him decide to help his fellow humans in times of crisis. He and his team have, over the last few years, set up relief camps at many disaster sites, including the flood-hit areas of Kerala in 2018.

Harteerath narrated stories of farmers who came all the way from Maharashtra to Shahjahanpur to take part in the protest without realizing how cold North India gets. “To be able to give a mother a well-fitting sweater that she can put on her child and to put chappals on the feet of farmers who have none, is all the reward I need.”

Harteerath, incidentally, is a first year college student pursuing a Bachelor’s degree in Business Administration. “But right now,” he said, “helping the farmers is my priority.”

About a month ago, I met yet another very young man under the elevated portion of the Delhi-Meerut highway at the Ghazipur border protest site. While scores of old farmers sat around wood fires, smoked hookahs, and discussed the perfidy of the government, this young man, Shivam, stood next to a parked tractor intently reading a booklet about the three farm laws that someone had given him.

He was 15 years old but brushed aside the suggestion that he was perhaps a bit young to be at a protest.  “Samarthan ki koi umar nahi hotee,” he said. Solidarity has no age.

Asked how he felt being there, he responded, “Who cares how I feel? It is the government that is supposed to be feeling the pain of the farmers sitting here in the cold.”

At a time when the powers-that-be are doing their very best to divide and demonise, it is heartening to hear these words coming from a 15-year-old.

Even as the Indian state rails against a tweet by Greta Thunberg (and before that, by pop icon Rihanna) and files sedition charges for some imaginary global plot, it needs to realise that feeling the pain of those who are in pain and standing in solidarity with them is hardly the same as “promoting enmity and participating in criminal conspiracy”. If anything, young people living compassionately and fighting for the rights of those less privileged are to be commended, not condemned.

If there is anything that the farmers’ protest has shown, it is that empathy and solidarity are alive and well, and always will be. Shivam, Harteerath, Mallika, Anjney, Anushka – and Greta Thunberg – are living proof of that.