Reporters of some national TV channels complain that the actions of anchors in TV studios have made their ground reporting difficult, as many farmers express a sense of resentment towards them. 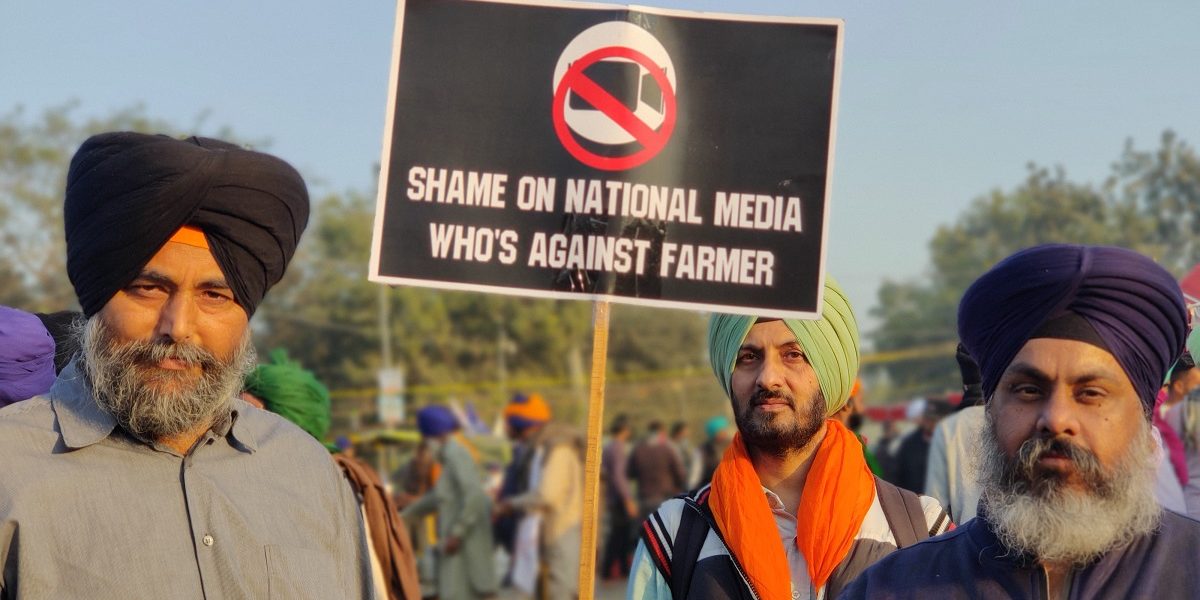 New Delhi: At the Singhu border, the sight of farmers holding banners that say, “Godi Media, Go Back” or “Godi Media Not Allowed” is hard to miss. When a media person tries to interview or speak with them, the protesting farmers do not hesitate to ask, with a no-nonsense look on their face, “You are not from Godi media, right?”

“Godi media” is a term that was coined by NDTV anchor Ravish Kumar to refer to media organisations that are “lapdogs” of the Narendra Modi-led BJP government. The term has become common usage among people and is used to refer to TV channels that are perceived as mouthpieces of the ruling party.

The farmers’ resentment has been particularly strong against reporters of Aaj Tak, Zee News and Republic TV, some of the news channels that they have labelled as “Godi media”. This stems from the feeling that the protest and the farmers are not being represented fairly.

One farmer told The Wire, “These media channels come here on purpose and question older farmers very specific questions on the farm laws in a bid to show that we don’t know anything about the reforms. Or they show us as supporters of Khalistan to discredit this movement.” 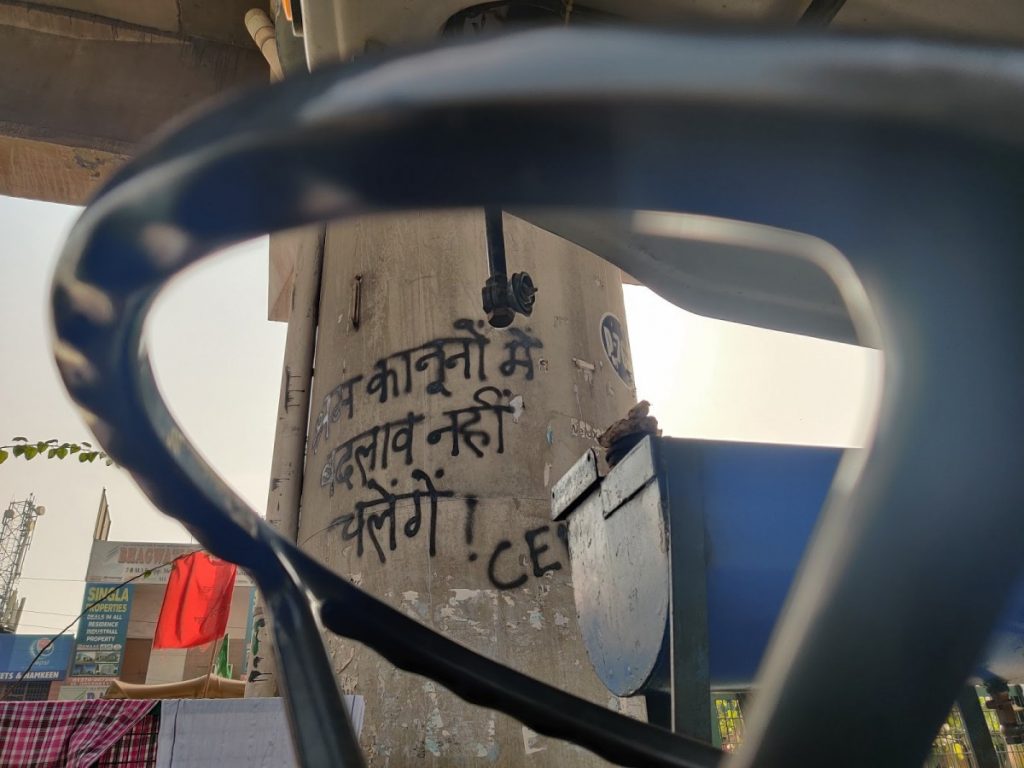 ‘Facing wrath because of some anchors’

Shakir* (name changed) has been a reporter for a mainstream TV channel for a decade. He is one of the reporters with whom the farmers have refused to speak. But he says that it is “unfair”, since he doesn’t subscribe to the views shared by “some anchors” of his channel. He says, “Since 2014, mainstream channels – including mine – have become mouthpieces of the government. Earlier, journalism used to be anti-establishment. But not anymore.”

He says that the views expressed by certain anchors on his channel cause him a great deal of trouble while reporting on the ground. He says, “The big anchors make a lot of noise in the studio but have enough money for security. They are well settled. But what they do creates a problem for us. Ground reporters are the ones who suffer.”

He says he has faced this problem in the past too, during the JNU protests, anti-Citizenship Amendment Act (CAA) protests. It is only after a great deal of convincing that the people who refuse to speak with him change their mind, he says. “We have to make people understand that we don’t necessarily subscribe to the things they show on our channel during prime-time debates,” Shakir says.

Apart from refusing to talk to him, Shakir says some farmers have also made videos without his consent and circulated it among the protesters, telling them not to speak to him.

He expresses his disappointment, saying he is genuinely interested in “fair reporting”. Though he has not faced any violence, he is precautious. A vehicle is on standby for him to make a quick exit and he usually remains close to the police or armed forces.

However, Shakir has identified a few people who agree to speak to his channel and don’t turn him away.

During the anti-CAA protests, he says he had to remove his ID card and put the mic with the channel’s logo away in order to report from there.

Also Read: Backstory: Farmers’ Protest and Callousness – as the Media Sows, So Will They Reap

When people refuse to talk

Mira* is another reporter who had covered the anti-CAA protests and is now also covering the farmers’ protests. During both the protests, she says, she faced a scenario where the people expressed their anger at the primetime shows on her channel, a mainstream Hindi TV news channel.

She says that during the anti-CAA protests, she sensed a feeling of resentment from the people towards her channel. But during the farmers’ protest, she has witnessed ‘anger’. Though at the farmers’ protest, she has not faced any violence or threats, she adds, “Because the Shaheen Bagh and other anti-CAA protests were mostly led by women, it fel safe.”

Mira says that it has become difficult for her to secure the trust of farmers while reporting from the ground.

She says, “My channel is seen as completely right-wing due to the actions of some anchors. There is, sometimes, truth to this perception also. But even though the anger is directed at the anchors, it comes out on us, the ground reporters. It does not reach the anchors. And since mine is a Hindi news channel, it has a wide reach across the country. If I go out to report for the same channel’s English counterpart, there is not an equal amount of anger.”

She has been heckled multiple times at the farmers’ protest. “Usually, common people refuse to talk to our channel. There is more trust when it comes to regional and local channels, but the national media has lost the trust of common people,” she says.

However, she has found a way to appeal to the farmers to talk to her. She explains, “I tell them if they find something objectionable in my live broadcast, they can stop me then and there.”

She says that along with the farmers, journalists have also suffered the consequences of being tear-gassed and lathi-charged while reporting from the ground. To hide her channel’s logo, Mira has been using a lapel mic instead of the one with the channel’s logo on it. “We have to find ways to get work done. At the end of the day, it’s a job and we have to deliver,” she says. 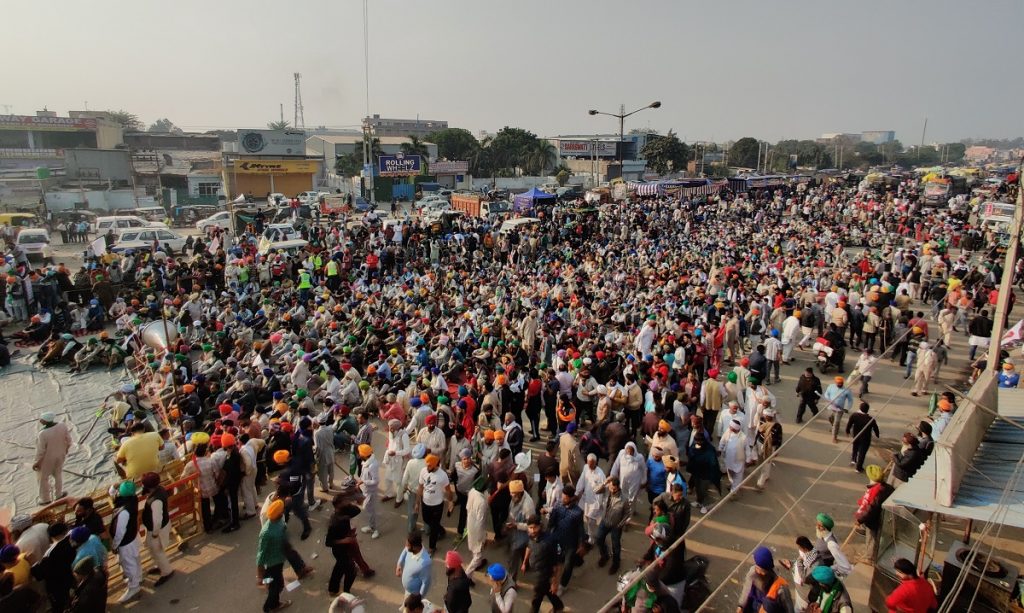 Vishal* is a cameraperson who is at the protest site. He has been working with a leading news channel for about 20 years now. He says, “When there is distrust among the common people regarding our channel, our first instinct is to protect our equipment from any harm.”

He says, “For a cameraperson, there is nothing more important than the camera and the news he is covering. We are simply camerapersons who don’t even know about the so-called propaganda being run on our channel, but we also face the heat at the protest site.”