Icons of Defiance: Protest and Solidarity on Delhi’s Borders

Even after braving police action, concrete barriers, iron spikes, suspension of water and electricity, what makes the protesting farmers stay on? The protest art at Ghazipur, Tikri and Singhu may offer some insight. 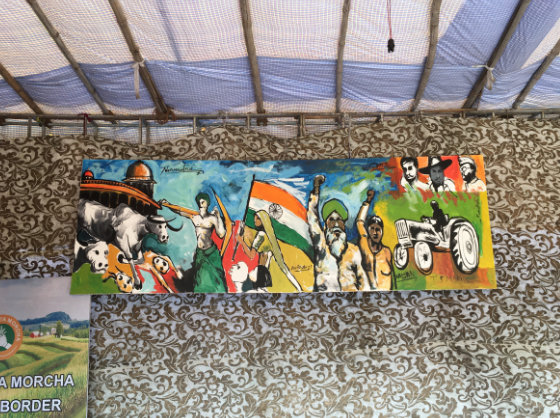 Painting inside a tent at Tikri. Photo: Kanika Singh

Farmers have been protesting at the Delhi borders for six months now. They have braved police action, arrests, concrete barriers, iron spikes, suspension of water, electricity and the Internet, relentless vagaries of weather, and deaths of their comrades and family members. Yet, they remain firm in their protest. What makes them stay on? Who inspires them? The protest art and celebrations in Ghazipur, Tikri and Singhu may offer some insight.

The trolleys, tractors, tents of the farmers are covered with handwritten and printed posters, banners, paintings, stickers and flags. They carry portraits of leaders of peasant struggles, martyrs who fearlessly gave up their life as they defied oppression, revolutionaries who challenged the British rule, Dalit leaders and anti-caste reformers, and heroes of 1857. Walking through the protesters’ camps offers a vivid lesson in the history of protest and of solidarity.

There are paintings of Baba Nanak as a farmer, alongside the poetry of Sant Ram Udasi and Lal Singh Dil, emphasising the value of labour. Sant Ram Udasi’s famous words: Utth Kirtiya, uth ve, utthan da vela [Rise, O, Worker (those who toil), for it is the time to rise (in protest)] are frequently invoked. 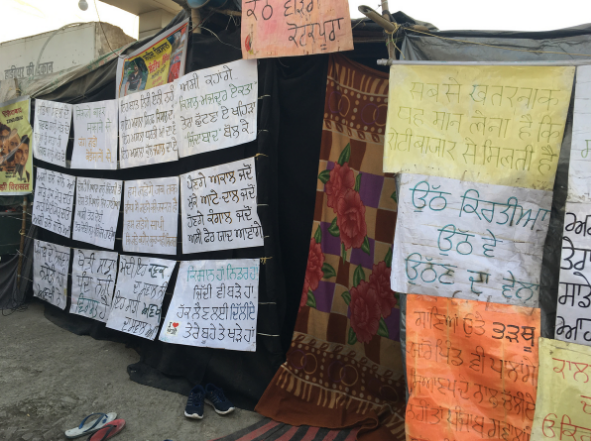 A tent with handwritten posters in Tikri. One of the Punjabi posters has a line from the famous poem of Sant Ram Udasi: ‘Utth Kirtiya, uth ve, utthan da vela’. Photo: Kanika Singh

Some of the most popular images are those of Bhagat Singh, Rajguru, Sukhdev, Udham Singh and Ghadar activists like Sohan Singh Bhakna and Kartar Singh Sarabha whose revolutionary activities continue to inspire generations of Indians. 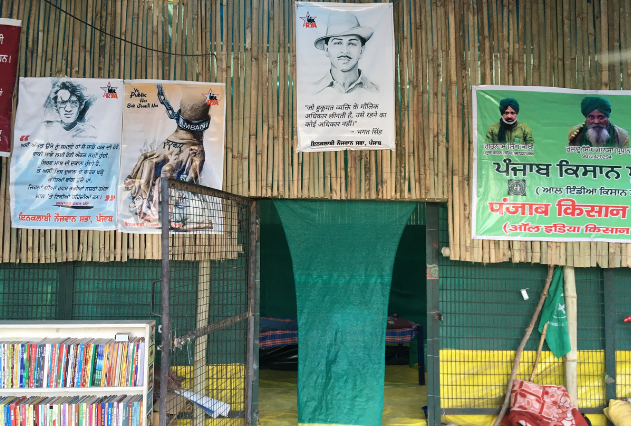 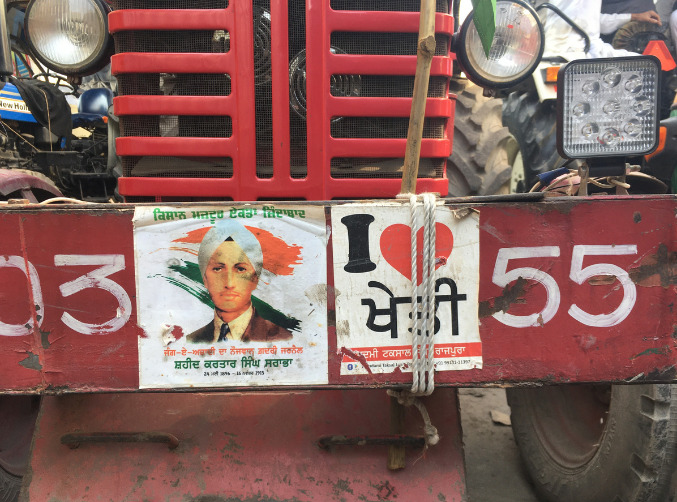 ‘Kartar Singh Sarabha’ and ‘I love Kheti’ stickers on a tractor in Tikri. Photo: Kanika Singh

The protesters celebrated this year’s Lohri by not only consigning the farm laws to the bonfire but by also singing about the folk hero, Dulla Bhatti, sometimes called the ‘Robinhood of Punjab’ who rebelled against the Mughal and gave away tax money to the poor. 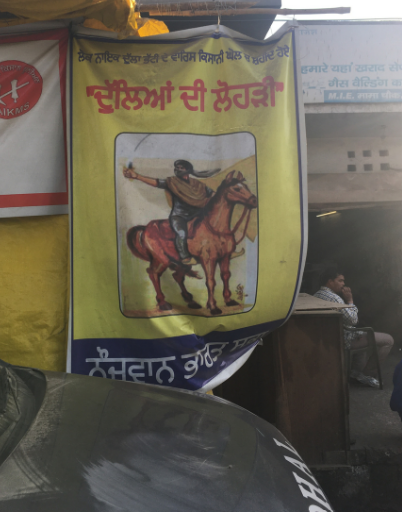 Another inspiring hero is Banda Bahadur who is remembered for bringing the Mughal administration in Punjab on its knees. The stories of Banda’s raids in Sirhind to avenge the killing of Chhote Sahibzade (two younger sons of Guru Gobind Singh), his attempts to distribute land and revenue to the farmers, and his eventual martyrdom in Delhi are stuff of legends.

Also read: In Photos: Ghazipur, on the Day Farmers Refused to Bow Down

According to Sikh tradition, the Chhote Sahibzade, aged only seven and nine years, respectively, chose to be bricked alive rather than gave in to the Mughals. They and Mata Gujari (mother of Guru Gobind Singh, who inspired them to remain courageous and true to their belief) – are all deeply revered figures in the Punjab region whose martyrdom is commemorated till today. Their images too appear at the protest sites. 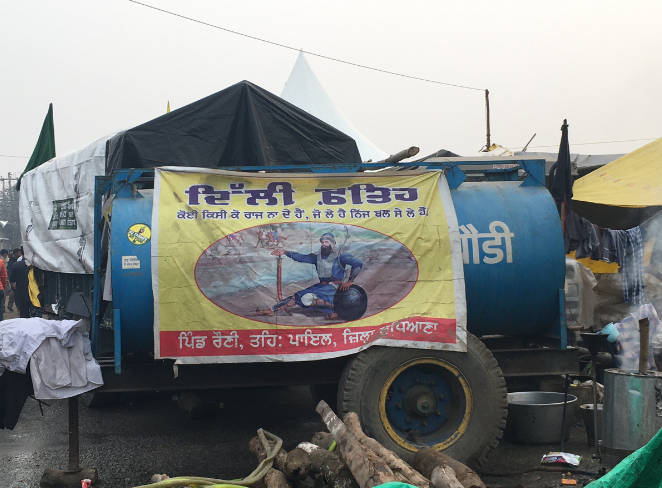 Among freedom fighters are folk heroes like Birsa Munda, a tribal hero from present-day Jharkhand, and Baba Shahmal, a Jat from Uttar Pradesh for leading the locals in rebellion in 1857. Leaders who led peasant struggles against the British as well as governments in independent India continue to inspire the farmers. There is Ajit Singh (Bhagat Singh’s uncle) known for the ‘Pagdi Sambhal Jatta’ movement of 1907; Swami Sahajanand Saraswati of All India Kisan Sabha, Chaudhary Charan Singh, the famous leader from western Uttar Pradesh. 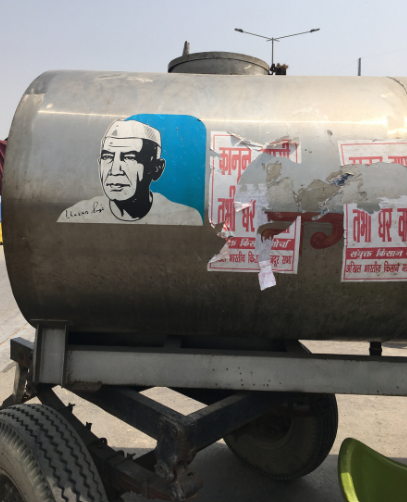 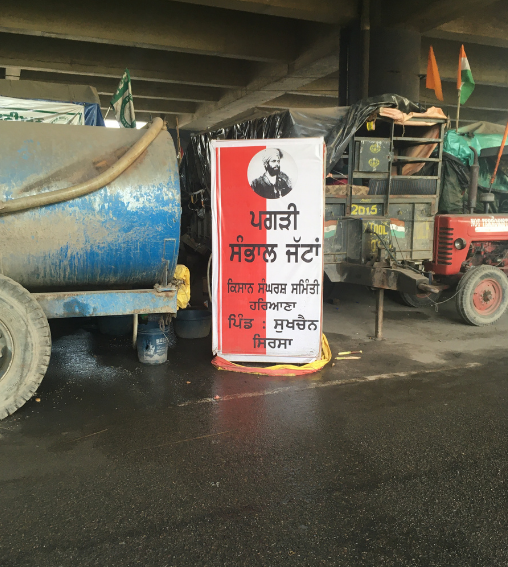 There are posters of B.R. Ambedkar, Savitribhai Phule and Guru Ravidas – social and political leaders who offered a radical critique of the caste system. 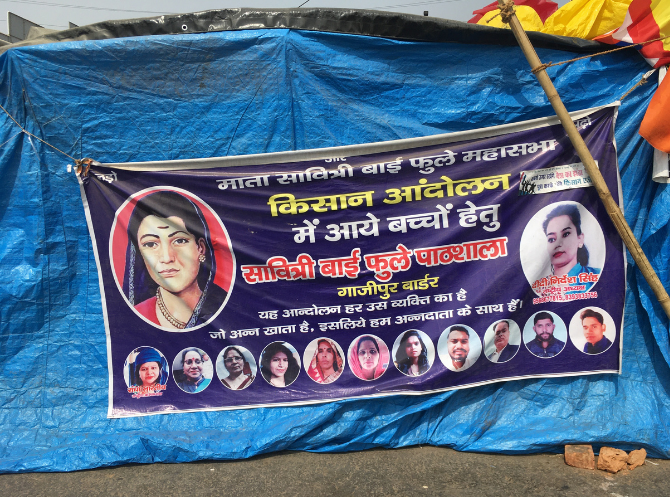 Particularly remarkable is the series of commemorative events organised by the Kiran Morcha: International Women’s Day on March 8, to mark the struggles of working women for equality and recognising the contribution of women farmers; May Day, recognising the working classes’ fight for their rights on May 1. Ambedkar Jayanti on April 14 became a call for ‘Save Constitution Day’ as a critique of the central government’s unconstitutional implementation of the farm laws. It was also celebrated as the ‘Bahujan Ekta Diwas’. The ‘Pagdi Sambhal Jatta Diwas’ on February 23 commemorated the anti-colonial peasant movement led by Ajit Singh.

Guru Ravidass Jayanti and Chandrashekhar Azad’s martyrdom were commemorated together on February 27; the family members of those who participated or were killed in the 1930s Pepsu Muzara movement were honoured on March 19. Bhagat Singh, Rajguru and Sukhdev’s martyrdom day, March 23, was celebrated as ‘Shaeedi Diwas’. Earlier in May, the anniversary of the revolt of 1857 was remembered. 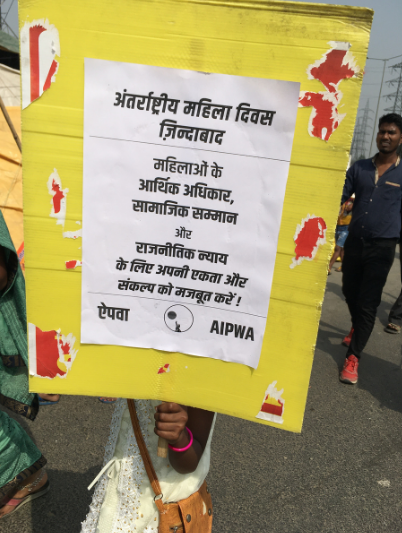 The current farmers’ protest is a ‘hond di ladai’ or a fight for existence, deeply inspired by these icons of defiance. They represent a will to defy all odds, and to fight till the last breath. They are icons of a righteous struggle, a just fight against unjust and oppressive rulers. Most importantly, there is a recognition that this is a struggle for equality, dignity and justice for all those who are marginalised. So, labelling them ‘anti-nationals’ or ‘Khalistanis’ is deliberately misleading.

These protesters are the inheritors of a rich historical legacy from Baba Nanak to Bhagat Singh and Ambedkar – they speak for freedom, equality and the rights of the weakest. What greater proof could there be of their commitment to India and its people?

Kanika Singh is a historian.