A video released by the environmental activist a few days before he went missing from a train while travelling to Madurai from Chennai, S. Mugilan says the "shooting was well planned".

Chennai: Two days after environmental activist S. Mugilan allegedly went missing from a train while travelling to Madurai from Chennai, the Madras high court has directed the Chennai police commissioner and the SPs of Villupuram and Kanchipuram to respond by February 22 to the habeas corpus petition filed by human rights defender and People’s Watch founder Henri Tiphagne.

Expressing his concern over the missing activist, Henri Tiphagne said, “The Villupuram police have denied arresting him in the court. In the backdrop of the Supreme Court judgment on Sterlite on Monday, we are really worried that Mugilan is in serious danger now.”

The Supreme Court had set aside the NGT order allowing Sterlilte to reopen on account of maintainability and had asked Sterlite to approach the high court.

Also read: ‘In Thoothukudi, the Choice Before People Was to Die of Cancer or Bullets’

Days before the judgment, on February 15, Mugilan had met journalists in Chennai to release a documentary – Koluthiyathu Yaar? Maraikkapatta Unmaigal (Who burnt it? The Hidden Truths).

In the video, he incriminates the Thoothukudi police of having orchestrated the shooting of anti-Sterlite protestors on May 22 last year. Putting together video clippings from various sources, Mugilan says the ‘shooting was well planned’ by the police and he accused IPS officers Shailesh Kumar Yadav and Kapil Kumar Saratkar of orchestrating it.

Hours later, after boarding a train to Madurai from Chennai, Mugilan went missing. His phone was reachable till 1.45 am on February 16, but since then, it has been switched off.

Mugilan has not reached Madurai as planned, and activists believe he may have been illegally detained by the police.

Meeting reporters at Thanjavur today, MDMK leader Vaiko expressed fear that Mugilan could havebeen  killed in an encounter or detained illegally. “The Tamil Nadu police and Sterlite administration should be held responsible” he said. 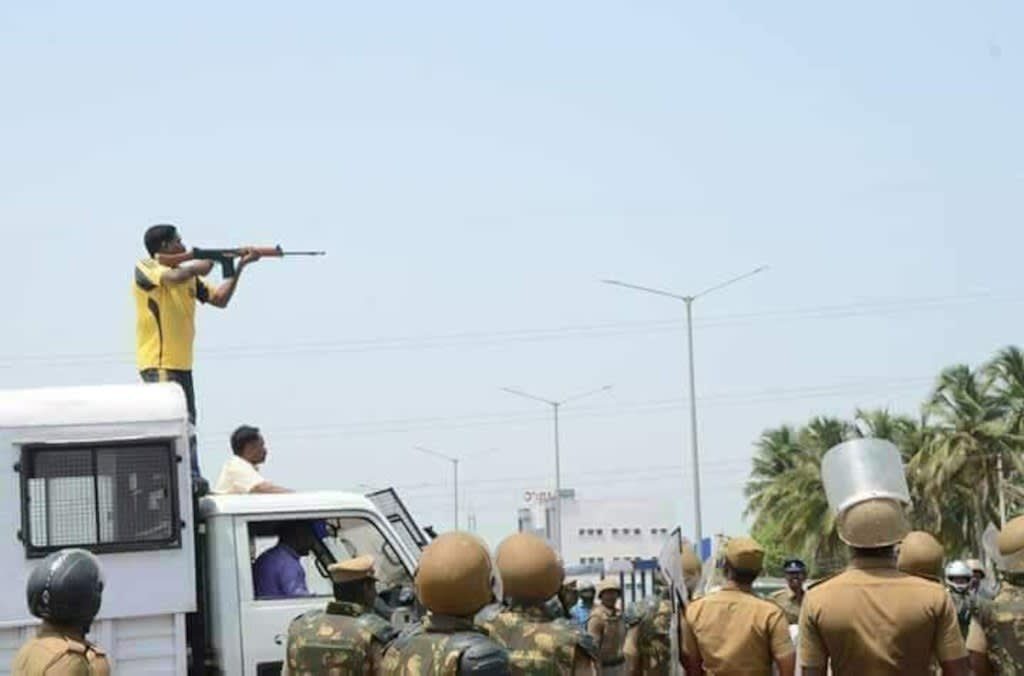 A picture showing a sniper shooting from atop a vehicle at the crowd on May 22, 2018. Credit: Twitter

Mugilan, an activist with the Tamil Nadu environmental protection movement, has been one of the most vociferous voices on environmental issues in the state. He has been in the forefront of various struggles, including against illegal sand quarrying, Koodankulam, for Cauvery river and Jallikattu. He has been facing over 15 cases including sedition.

Mugilan was arrested under 13 cases related to anti Koodankulam struggle in September 2017, shortly after he took part in a struggle against Sterlite in Thoothukudi. He was released in September 2018 after his lawyer obtained bails in all the cases.

Mugilan’s associates say there has been a precedent. “In March 2012, when he was struggling against Koodankulam plant, Mugilan he was illegally picked up by police for three days and then let off,” one said, asking not to be named.

Even at the press meet on February 15, Mugilan had voiced his fear that by releasing the video ‘evidence’, he was putting his life in danger.

In the 46-minute video, Mugilan seeks to establish that the ‘police’ had used a huge iron ladder to destroy two CCTV cameras prior to the shooting.

He says that Shailesh Kumar Yadav “had seen the iron ladder while inspecting, yet said nothing about it”. Mugilan also says the police had deliberately directed the protesting crowd towards the direction where there where now no CCTV cameras. Mugilan also seeks to establish that the protestors had not committed any arson, as had been claimed by administration as the reason for firing.

In the video, Mugilan also demands that the one-member commission to enquire into the shooting should file its interim report and that the autopsy reports of those killed in the shooting be released immediately. He has also demanded the arrests of the police officers concerned.