At a recent even in Bhopal, members of the two communities talked about how they are regularly rounded up en masse without warrants, tortured, extorted and incarcerated simply for their identity.

On January 19, people from DNT (De-Notified Tribes) and NT (Nomadic Tribes) communities living in Bhopal and neighbouring districts gathered in the city’s Rajiv Nagar basti, celebrating Ekjutta Divas (the day of solidarity). Members of Pardhi, Kanjar, Bediya, Sapera, Dafale, Nat and Banjara communities gathered on the death anniversary of Tinti Bai, a 16-year-old Pardhi girl who died by suicide after torture and abuse at the hands of the police in 2008. The event was organised by members of Majal, a youth collective of Pardhis engaged with creating awareness in and about DNT communities.

Police brutality isn’t new or unusual to members of DNT and NT communities. Some of the most marginalised communities in India, they are often labelled ‘Habitual Offenders’ by the police, an extension of the barbaric Criminal Tribes Act instated by the British. They are regularly rounded up en masse without warrants, tortured, extorted and incarcerated simply for their identity.

At the event, several people spoke up about their experiences with the police. Ravi, of the Banjara community in Suraj Nagar, spoke about how the police arrived in the basti with no warning and no warrant, and raided the houses of everyone from the community, claiming that they were brewing spurious liquor. They assaulted members of all the households, whether alcohol was found or not, he said. Acknowledging that some members of his community have historically made a living selling alcohol, he also raised the question, ‘Jab bade punjipati sharaab banaye aur bechen, usko business boltein hain. Jab hum banatein hain, use apraadh? Aisa kyun? (When capitalists make alcohol and sell it, they call it a business. When we make it, it’s a crime? Why is this?)”

Pardhi youth described some of the cases they had engaged with in fact-finding missions that Majal had conducted. Shankar, a man from the Sapera community in Betul, was beaten up so badly by the police that he succumbed to his injuries 20 days later, in hospital. His wife, Bijli bai from the Pardhi community, was turned away by senior police officials in Betul and has now come to Bhopal with her children in an attempt to find someone who will listen.

In Rajasthan, a 15-year-old Pardhi girl was taken into custody on the false allegation of stealing a mobile phone. When her pregnant mother Soyna went to the police station to request her release, she was taken into custody as well, with the police allegedly hanging her upside down and beating her to near-death. After then being shunted from hospital to hospital, Soyna passed away on December 7 last year.

Geeta bai, a senior member of the Pardhi community in Gandhi Nagar basti in Bhopal, spoke of her long and ongoing fight to win justice for her younger sister – Indramal bai. Indramal bai was pushed to set herself on fire by members of the police who had been harassing her and attempting extortion for several days in November 2017. She succumbed to her burns a few days later – and the police immediately set to work to cover up any evidence of wrongdoing on their part, claiming her sari caught fire while she was setting fire to a pile of scraps. After street protests, a case was filed, and after two years, the high court ordered a CBI inquiry to be set up in 2019. Last year the CBI charged two officers with abetment of suicide and ordered a departmental inquiry into the actions of a third. Geeta bai’s speech brought a huge cheer from the group, as this struggle and the outcome has inspired DNT communities to raise their voices and speak out more about the injustices they face every day. 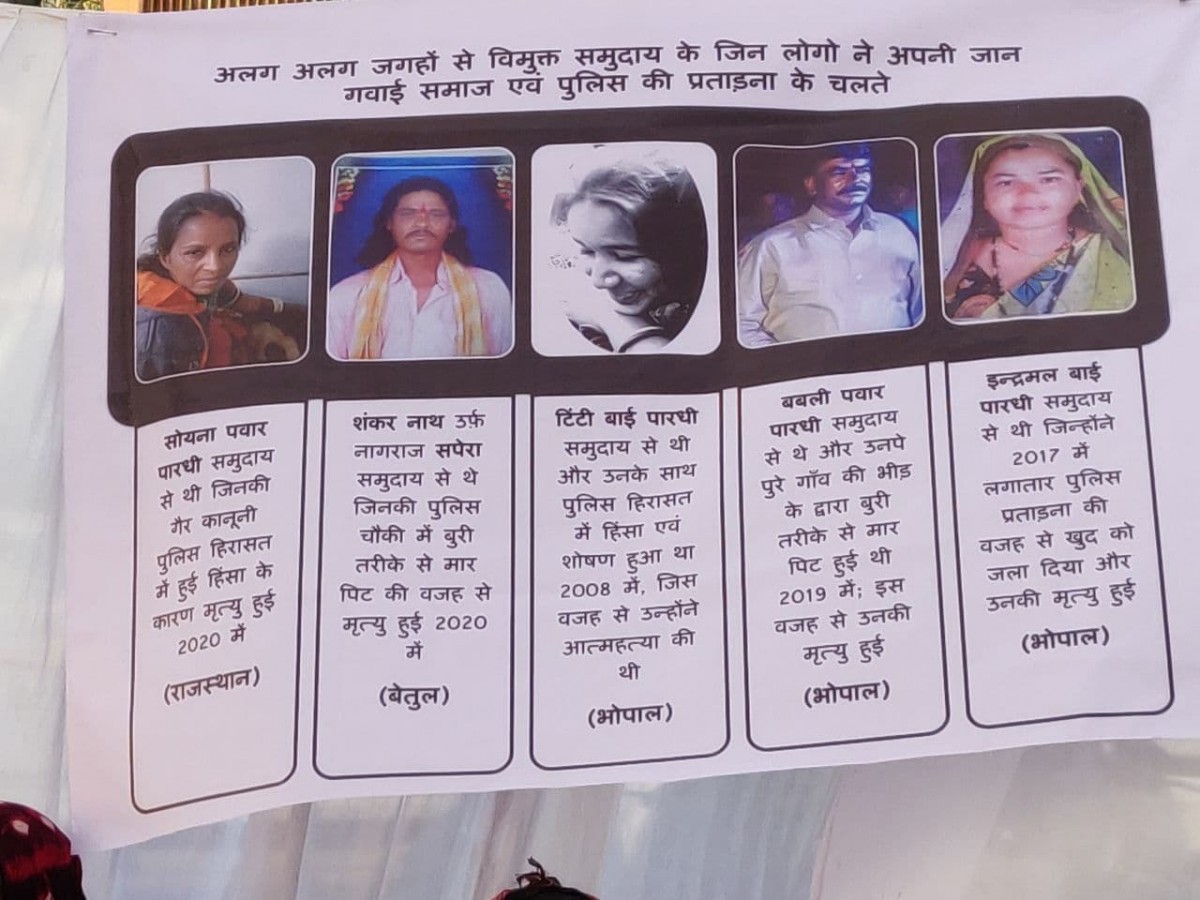 Individuals from DNT-NT communities who have lost their lives due to police violence or suicide. Photo: Majal

As Tasveer, a young poet-activist and one of the founder members of Majal put it, “Agar hum das saal pehle yeh himmat kar paate, to shaayad tinti bai ki ladai bhi aage le jaate (If we had had this courage 10 years ago, maybe the fight for Tinti bai could have also continued).”

These cases are just a few of the many instances of death at the hands of the police, upper castes or of suicides due to torture and intimidation that DNT communities have to deal with.

The institutional discrimination also goes beyond direct incarceration and violence by the police. A major demand of the gathered communities was for a jaati-praman patra, or caste certificate. Vijay Ram from the Kanjar community discussed the problem and complexity of categorisation. They are neither categorised as STs or SCs, and the same goes for Pardhis who are not categorised as SCs or STs in the districts of Bhopal, Sehore and Raisen. These communities are vulnerable and in dire need of representation and opportunities, yet they are systematically being kept away from the so-called ‘development discourse’.

They have been made repeated promises by various governments, but no progress has been made. As a consequence, they lag behind in education, livelihood opportunities, and are rendered more vulnerable to violence by the police as well as by upper caste members of their areas. As Bano baji from the Dafale community put it, “Humara to astitva hi nahi mante, chahe shiskha ho ya rozgaar, na hi koi humari baat kar raha hai (They don’t acknowledge our existence, whether it’s education or livelihoods, and nor is anyone speaking about us).”

Support from the government is especially required in the area of livelihoods – most of the ancestral occupations of these communities have been deemed to be crimes. Kiran, from the Bediya community in Sagar, said, “Bediya sammuday ki ladkiyan dance karti hain, humko badnaam karte hain, kehte hain ki ladkiyon se dhandha karva rahe ho… lekin hum aur kya kaam karenge?… Hum mazboor hain, humare paas aur koi raasta nahi hai (Girls of the Bediya community dance, so they defame us, saying ‘You make your girls go into prostitution’, but what else are we to do? Our hands are tied, we have no other option).”

Most members of the community who are forced to live in cities can only fall back on waste-picking. And even there, as Kailashi bai, one of the senior most residents of the Rajiv Nagar basti, says, “Bas kachra been rahein hain, usme bhi paisa nikalvane ke liye martein hain (All we are doing is segregating and gathering waste, and even there they beat us up to get money out of us).”

With little access to education, almost none to higher education, and struggles against authority figures to eke out even the most basic of livings, something needs to change for these groups. Shivani and Pallav, activists from Bhopal, spoke about the need to push for the implementation of the suggestions of the Renke Commission formed in 2008. One of the major recommendations was for the creation of a DNT cell that would go some way towards addressing some of the issues mentioned above.

Younger members of the community spoke out about the importance of strength and solidarity within the community as well – highlighting the hypocrisy of the patriarchal panchayats within the bastis. Claiming their panchayats have stopped serving them and are interested only in their own profiteering, Saanish, a Pardhi woman and one of the founding members of Majal, said, “Sab cheez ka karta dharta panchayat ban gayi hai, pehle ki panchayat beedi peekar baat suljha lete the, lekin ab pachaas hazaar rupay maangte hain? Isliye toh humein chori karna padta hai! (The panchayat has become the final administrator of everything, earlier the panchayat would sort things out over beedis, but now they demand Rs 50,000? This is why we have to turn to stealing!)”

Other members followed her and spoke about the ways they are trying to break away from the ‘criminal’ tag, for which they needed support from the older (and mostly male) members of the community. Pushpa, a 16-year-old girl, spoke passionately about her love for the game of frisbee, which youths from various bastis in Bhopal have been playing for a few years now. “Hum jab practice kar rahein hotein hain aur police aati hai, hum unko garv se keh sakte hain ki hum chor nahi hai. Yeh humaari team hai aur hum Dilli bhi ja chuke hain tournament ke liye, aur hum practice kar rahein hain… Lekin is ke liye aapko apni ladkiyon ko nikalne dena hoga – sirf kaam mat karao unse (When we’re practicing and the police come, we can tell them with pride that we are not thieves. This is our team and we’ve even gone to Delhi for a tournament, now we’re practicing. But for this, you have to let your girls out of the house – don’t only make them work).” Similarly, Rajveer spoke about his and his schoolmates’ attempts to engage with permaculture, “Hum Adivasi hi hain jo jangal ke saath rehna jaanta hai, jo apne se chhoti cheezon ki jaan ki parvah karna jaanta hai (Us Adivasi people are the ones who know how to live with the forest, who know how to care for things smaller than us).”

Also read: ‘Despite Being Denotified, We Are Labelled as Criminals’

Another group of youths spoke about their use of theatre as ‘agitprop’ (agitation-propaganda), and performed a small play highlighting the hypocrisy and violence of the forest department and the way forest laws are formulated to their explicit disadvantage. “Theatre hummare liye na sirf ek art hai par ek zariya hai humari mushkil vyakt karne ka (Theatre is not just an art for us, it’s an instrument for us to make our troubles known),” says Jeenu.

The event ended with members of the Banjara community singing Kabir bhajans. In the closing discussions different communities gathered to plan their paths going forward. The consensus was clear – Ekjutta Divas shouldn’t be about only this day, but about learning from each other and supporting each other every day. As one dadi from the Pardhi community in Ehsan Nagar put it, ‘Jis tarah Geeta bai ne police ko ungli di, humein bhi deni hogi. Aise hi ungli dete dete hum mutthi ban jaenge! (The same way Geeta bai has raised her finger to the police, we will have to do the same. And in doing this, we will become a fist!)

[We also demanded our freedom,
We fought when we didn’t get it
But we didn’t know
Instead of freedom
We will once again have to salute to our own slavery]

[They called us thieves
You were our own people, of our own land
In your demands for self-rule, why did we get lost?]

[We fought, just like you did
We got out of our houses, demanding freedom
So what is this trick of independence?
You got the freedom to dream
We got the opportunity to count the bars of our cells]

[Now tell us, who is free?
Whose passion
whose country
which citizens?
A free citizen?
Or the criminal citizens
of a free country?]

∼ A poem by Tasveer, a Pardhi poet-activist

The authors are members of Majal. With inputs from Heman Oza and Dhruva Desai.