Bilkis Has Struggled Long Enough. The Fight for Justice Is Now India's Burden to Discharge.

The Supreme Court chose to get involved in the Bilkis case in 2002 because it knew the Gujarat government was protecting the rapists and murderers. Twenty years later, nothing has changed. 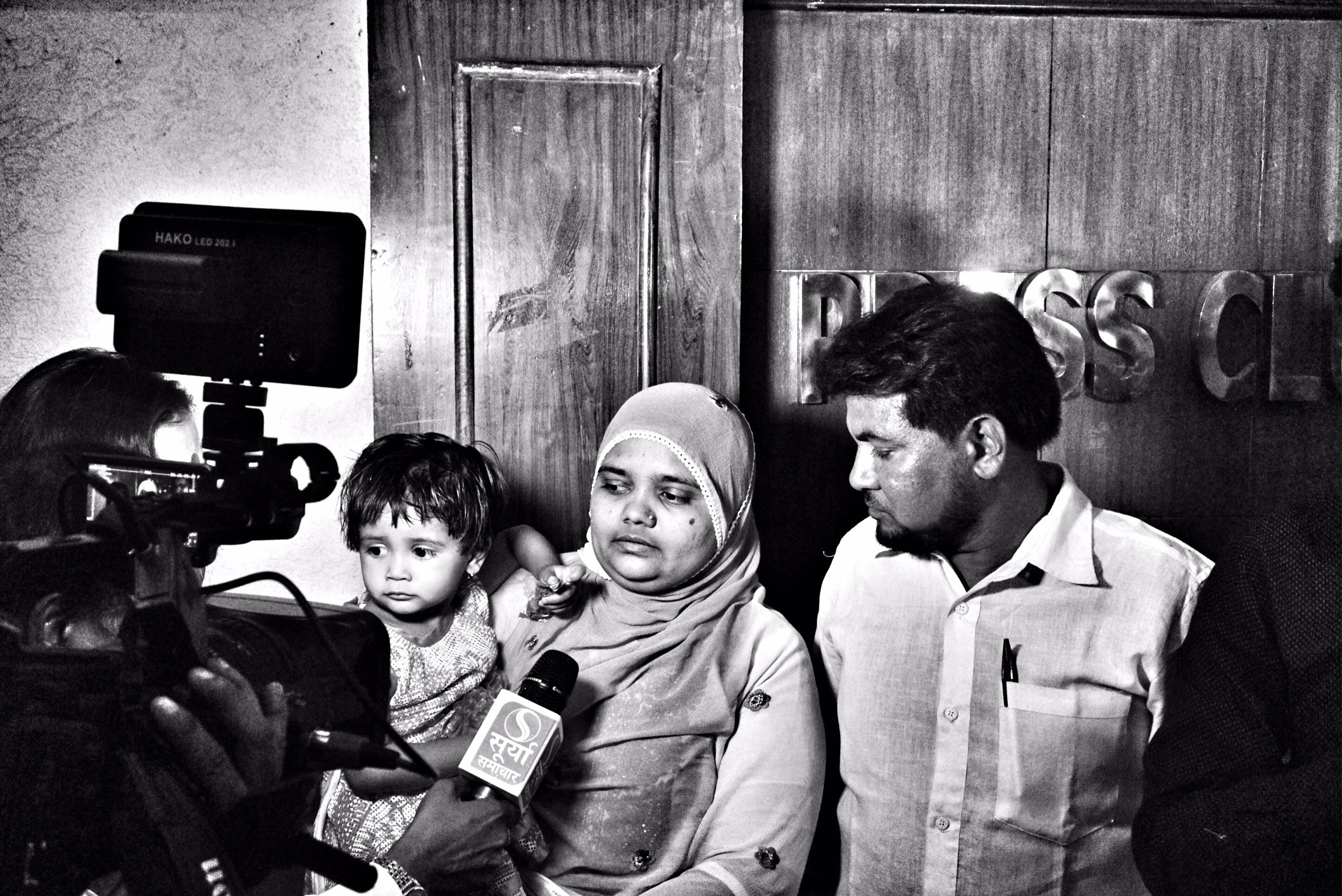 Bilkis Bano with her husband Yakoob and their daughter before a press conference in New Delhi on May 8, 2017. Photo: Shome Basu

On August 15, 2022, the Gujarat government announced its decision to free the 11 men sentenced to life imprisonment in the Bilkis Bano gangrape and mass murder case of 2002.

It transpired that the state government had set up a panel comprising officials and ‘social workers’ – all of whom happened to be members of the Bharatiya Janata Party or had connections with it – which duly approved the remission of sentence. This, despite the fact that several of the accused had, as recently as last year, threatened witnesses while on temporary parole – behaviour that is the very opposite of remorse, repentance and rehabilitation. One of the panel members, a BJP legislator no less, has said by way of justification that some of the convicts were, after all, Brahmins with good sanskaars, or values, and that they may not even have been guilty in the first place.

It is fitting, therefore, to re-remember the names of each of these men with good sanskaars and re-inscribe exactly what they did to Bilkis Bano – who was just 21 at the time – and 14 members of her family. Let no one waver from reading these facts, just as Bilkis has not wavered. Instead, placing a stone the size of a mountain on her chest, she has bravely walked from court to court, so that, as the only adult survivor of this massacre, she may discharge the duty and burden of seeking justice.

On March 3, 2002, eleven men – 1. Jaswantbhai Nai, 2. Govindbhai Nai, 3. Shailesh Bhatt, 4. Radhesham Shah, 5. Bipin Chandra Joshi, 6. Kesarbhai Vohania, 7. Pradeep Mordhiya, 8. Bakabhai Vohania, 9. Rajubhai Soni, 10. Mitesh Bhatt, and 11. Ramesh Chandana – armed themselves with swords, sickles and sticks, got into two white vehicles and went out on a pre-meditated human hunt. When they found their target, the Sanskari 11 gang-raped the women among them and murdered a total of 14 people in cold blood.

People convicted for gang-rape and multiple murders in the Bilkis Bano case of the 2002 Gujarat riots, being welcomed as they come out of the Godhra sub-jail after the Gujarat government allowed their release under its remission policy, in Godhra, Monday, August 15, 2022. Photo: PTI

They murdered a three-and-a-half-year-old child, Bilkis’s firstborn, her daughter Saleha. Shailesh Bhatt forcibly snatched her from Bilkis and dashed her on the rocky ground. Saleha died on the spot.

They murdered Bilkis’s 45-year-old mother, Halima with swords, sickles and sticks causing multiple fractures and bleeding injuries leading to her death on the spot.

They murdered Bilkis’s two little brothers. Irfan was just 11. Aslam the older one was nearly 13. He was assaulted with deadly weapons causing multiple fatal head injuries leading to his death on the spot.

They murdered Bilkis’s baby sister, Munni. She was just over 13 and died from her head injuries.

They struck Bilkis’s younger sister Mumtaz, 20, and killed her on the spot.

They attacked Bilkis’s aunt (phupi), Amina Patel, 35 years old, with deadly weapons causing fracture of the skull and bleeding injuries and she died on the spot.

Another of Bilkis’s aunts (phupi), Sugraben, 40, was attacked with deadly weapons causing head injuries that killed her on the spot.

Sugraben’s three daughters, who were Bilkis’s cousin sisters – Madina, Mumtaz Patel and Shamim – were attacked. The men hit Mumtaz, 20, with deadly weapons, and killed her on the spot.  They attacked Madina, 18, also killing her on the spot. Shamim, 20, was holding her two-day-old infant when they attacked her. She died from fatal head injuries.

They attacked Shamim’s infant with deadly weapons and killed her on the spot. The baby girl had not even been given a name yet. She remains an ‘unnamed child’ in the special sessions court judgment of 2008.

All 11 men were convicted of 302 r/w Section 149 of the Indian Penal Code (IPC) for murdering 14 people, including a two-day-old infant and a three-and-a-half-year-old girl.

All 11 men were also convicted under Sections 376 (2) ( e) and (g) of IPC for gang rape and for knowingly raping a pregnant woman.

All 11 men were further convicted under Section 376 (g) of IPC of committing gang-rape on Bilkis’ mother Halima and Bilkis’s cousin Shamim, before killing them.

These 11 men took from Bilkis virtually her entire extended family. The women who were the warp and weft of her life – mother, sisters, cousin sisters, aunts – were all murdered in front of her, raped before her eyes. They did not spare children, babies and infants. Bilkis’s young brothers and sister were killed. Her firstborn was killed.

There was a gruesome cover up too. The victims were dragged to a jungle and buried in pits with bags of salt. Seven bodies were never recovered. In the mountain of evidence that was collected, the Central Bureau of Investigation recovered a photograph of Saleha’s dead body, but the little child’s remains could not be found. She never received a burial. Bilkis and Yakub still mourn the missing grave, where they can never go and pray for their daughter’s soul.

What these 11 men committed was no ordinary crime. Their sentences of life imprisonment by the special sessions court in Mumbai in 2008 were upheld by the Bombay high court as well as the Supreme Court of India.

The Supreme Court on April 23, 2019 awarded Bilkis exemplary compensation, describing how the “brutal, diabolic, gruesome, horrific acts of violence” committed on her had left an “indelible imprint on her mind which will continue to torment and cripple her”. They said “this case has to be dealt with differently as the loss and suffering…surpass normal cases.”

The Bilkis case was extraordinary for another reason. In the dock were not just men accused of gang rape and mass murder but the Gujarat government and police force which had helped to cover up the monstrous crime. The trial was held in Maharashtra because the Supreme Court decided the Gujarat government, then headed by Narendra Modi, could not be trusted to provide the necessary environment for the delivery of justice.

Since the case was investigated and prosecuted by the CBI, remission was only possible with the Union government’s concurrence. Writs have been filed in the Supreme Court by Rooprekha Verma, Revati Laul, Subhashini Ali and Mahua Moitra challenging the early release of the 11 convicts. The Supreme Court chose to get involved in the Bilkis case in 2002 because it knew the Gujarat government was protecting the rapists and murderers. Twenty years later, nothing has changed. Modi’s silence on the issue will further reinforce the belief among reputed global institutions like the United Nations that India is a country which openly discriminates against its people on the lines of religion and gender.

The people of this country cannot stand by and treat this as Bilkis’s fight alone. The struggle for justice is a burden India has to discharge. The Supreme Court must stand by Bilkis and the 14 members of her family who were brutally killed and send the convicts back to prison. Partisan politics and communal bias cannot be allowed to drive the process of remission.