The existence of statutory and constitutional safeguards has not prevented unfettered executive power from cracking down on activists and rights defenders. 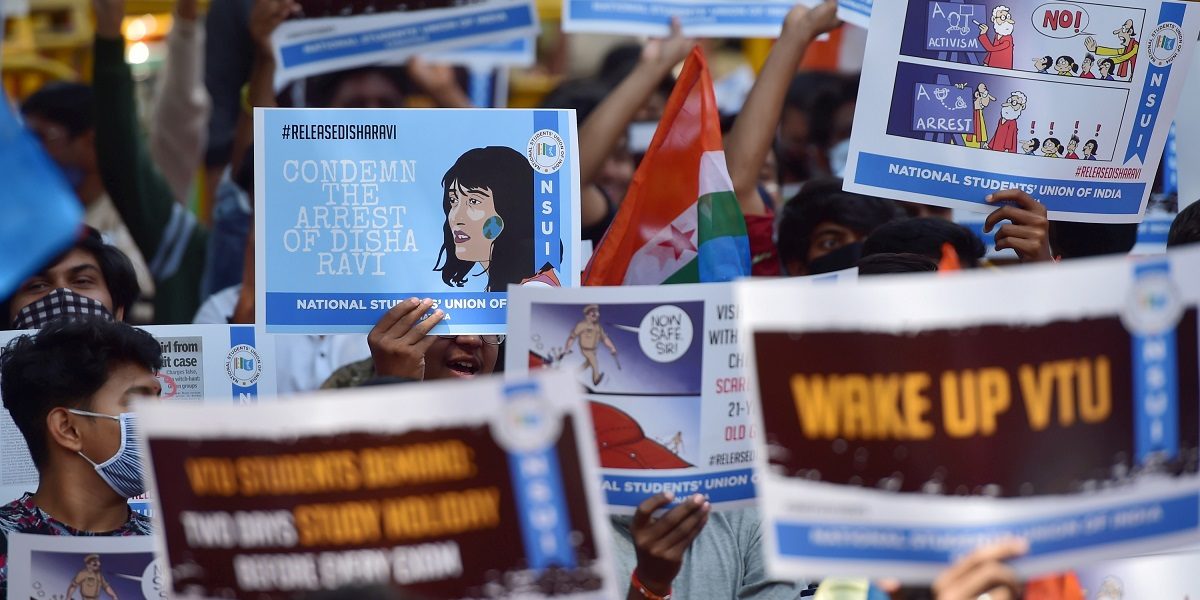 The Haryana home minister, 67-year-old Anil Vij, took to Twitter against the 21-year-old environmental activist Disha Ravi, saying ‘anti-nationals like her should be destroyed from the roots’. Ravi was arrested by the Delhi Police from Bengaluru and later sent to five-day police custody for allegedly editing a ‘toolkit’ shared by Greta Thunberg. The charges include sedition, criminal conspiracy, spreading disaffection against the Indian state, and promoting enmity.

Disha is a member of ‘Fridays for Future’, an organisation under the government’s scanner from protesting the Environmental Impact Assessment Notification, 2020. The environmental organisation was served a notice under the Unlawful Actions (Prevention) Act UAPA, which was later withdrawn by the police, who said it was sent ‘erroneously’.

Just months later, Ravi has been charged under the classic provisions of sedition, often used nowadays to silence dissenters. The modus operandi of state forces suggest that a popular movement against the governmental policies is usually followed by sweeping arrests of activists over a concocted and worn out narrative of ‘anti-nationals’ and ‘terrorist outfits.’ The pattern has spread-out from Bhima Koregaon, UP’s crackdown on CAA protestors, judicial harassment after the Delhi riots, and the farmers’ latest protest.

Also Read: The BJP Has Its Own Toolkit to Go After Dissidents Which It Uses Ruthlessly

The activist’s hurried transit in the absence of a transit remand and the remand order granting her five-day police custody highlights severe procedural violations in the state’s mandate of criminal administration of justice. The magistrate, opined to be the most crucial constitutional functionary, seems to have deviated from standard procedures while granting remand. Senior advocate Rebecca John called the remand order an ‘abdication of judicial duties.’

The arrest has been made by the Delhi Police in civil clothes; when they arrived in Bengaluru, they tracked her mobile phones for her location and then arrested her from her residence, allegedly without informing the family of the details. It comes in violation of the DK Basu guidelines, requiring police to be in uniform with identifiable name-tags at the time of the arrest. It also requires that the reasons for arrest have to be clearly stated to the accused and their family members.

Firstly, the rule of inter-state arrest as laid by the Delhi high court requires establishing contact with the local police station, in whose jurisdiction the arrest takes place. The Bengaluru Police have stated that they were not aware of her arrest until she was on the flight to Delhi. A senior Karnataka police officer posted in Bengaluru told The Quint that a judicial officer was present, but local police officials were not involved. There are several speculations over whether or not the local police were informed and involved in the arrest of Ravi, as contradictory claims are reported.

The judgment also requires obtaining a transit remand by production at the ‘nearest magistrate’ within 24 hours, also stated in Article 22(2) of the Indian constitution. Police authorities conveniently disregarded the said procedure, and she was directly produced before the duty magistrate in the Patiala house court. She was only formally arrested in Delhi and not Bengaluru, as recorded. Even at the time of production before the duty magistrate, the transit remand’s compliance went entirely unchecked. Further, she could not consult her lawyer before being taken out of the state, contrary to the Delhi HC judgment.

In 2012, a letter sent by the Ministry of Home Affairs to chief secretaries of states said producing a person arrested in a different state before a magistrate in the police’s home state is against eh law. It highlighted the need for police forces to follow Section 80 of the Criminal Procedure Code. Senior advocate Rebecca John opined:

“If you are a duty magistrate, sitting on a Sunday, you should get at best remand for a day so that the regular Court takes up the matter the next day. Duty magistrates should never send an accused to 5 days PC.“

Senior advocate Geeta Luthra also voiced the concerns of granting a five-day remand by a duty magistrate in her interview with Faye D’Souza. The claims are in line with Rule 8 of the Delhi high court rules, which states that when an accused person is remanded to police custody, the remand period should be as short as possible. A vast public outcry followed the casual and mechanical approach in life and liberty.

Secondly, the question arises of effective legal representation being granted to the accused. The duty magistrate failed to ensure legal representation of her choice. Article 22 of the Indian constitution is a fundamental provision providing the earliest opportunity to legal representation by a practitioner of choice. Although a legal aid counsel represented Disha, it is alleged that the particular crime branch dissuaded the lawyers of her choice by giving them the wrong place of production, instead of the Patiala house court. It followed a similar pattern of misguiding the lawyers, also seen in the arrests of Safoora Zargar and Munawar Faruqui.

Thirdly, there was non-application of mind by the magistrate, a position regarded as a bulwark against unnecessary arrests. The remand order is mechanical, against the apex court guidelines in the Arnesh Kumar case, not stating Disha’s request to argue her case or inquiry on the transit remand. The magistrate conceded to the investigation officer’s recommendation for five-day police custody for ‘detailed interrogation.’ Rule 8 of the Delhi high court rules states that under no circumstances should an accused person be remanded to police custody unless it is clear that his presence is needed to serve some essential and specific purpose connected with the inquiry’s completion. A general statement by the officer applying for the remand that the accused may give further information should not be accepted. Historian Ramchandra Guha along with other activists hold placards during a protest against the arrest of climate activist Disha Ravi in Bengaluru, February 15, 2021. Photo: PTI/Shailendra Bhojak

Fourthly, the arrest of Ravi in the broader backdrop of the ongoing judicial harassment of activists in India shows a complete crackdown on democracy. Article 14‘s database reveals a rise in sedition cases after the Narendra Modi-led BJP government came to power. The crackdown on human rights defenders in the country is clearly evident. While voices from around the world unite in the atrocious arrest of Disha, Karnataka home minister Basavaraja Bommai, in his statement, said ‘there is nothing called protocol’. It is a clear warning that unfettered executive power has unfolded with no regard to checks and balances. The state’s orchestrated actions for allegedly drafting/editing a toolkit without revealing its contents show brazen abuse of power.

Also Read: Malicious Prosecution: A Deep Dive Into Abuse of Power by Police

The divide between legal framework and implementation of safeguards

This is not the first case of illegal arrest and detention of an activist in India. Over the past few years, a steep rise in arrests of civil rights activists is amply clear, even in the absence of government maintained data. The United Nations High Commissioner for Human Rights has expressed concerns over the rise in arrests or detention of civil rights activists in India for carrying out peaceful dissent. The brazen criminalisation of students, intellectuals and activists has seen a simultaneous rise in charges levied under draconian laws like UAPA and sedition. In light of unleashing the brute power of arrest by the executive, the arrest safeguards in the country become relevant.

The Third Report of the National Police Commission identified wrongful use of arrest powers as one of the police’s chief sources of corruption. Others have said that nearly 60% of arrests made by police officers are unnecessary and unjustified. The apex court, in the Joginder Kumar case, held:

“No arrest can be made because it is lawful for the police officer to do so. The existence of the power to arrest is one thing. The justification for the exercise of it is quite another. The police officer must be able to justify the arrest apart from his power to do so.”

While there is a justified outcry about the procedural violations in the detention and grant of remand of Ravi, the pattern of illegal arrests in the country is systematic. Despite the presence of constitutional and statutory safeguards, arbitrary arrests by the police have become a regular exercise often dealt with impunity. We should confront the question of how effective the implementation of arrest safeguards has been in the country. It appears that the rosy text on paper has no practical translation, and arbitrary arrests go unchecked, despite the existence of judicial oversight.

Ritika Goyal is a student at National University of Study and Research in Law (NUSRL), Ranchi. Shrutika Pandey is a litigation assistant with Human Rights Defenders Alert-India in New Delhi.