Demolitions Not Only Continue to Wreck Livelihoods, Now Used as 'Punitive Measure’: Report

Governments demolished 36,486 houses in 2021 – meaning at least 100 homes were destroyed every day. In other words, at least 567 were evicted every day or 24 people lost their homes every hour. 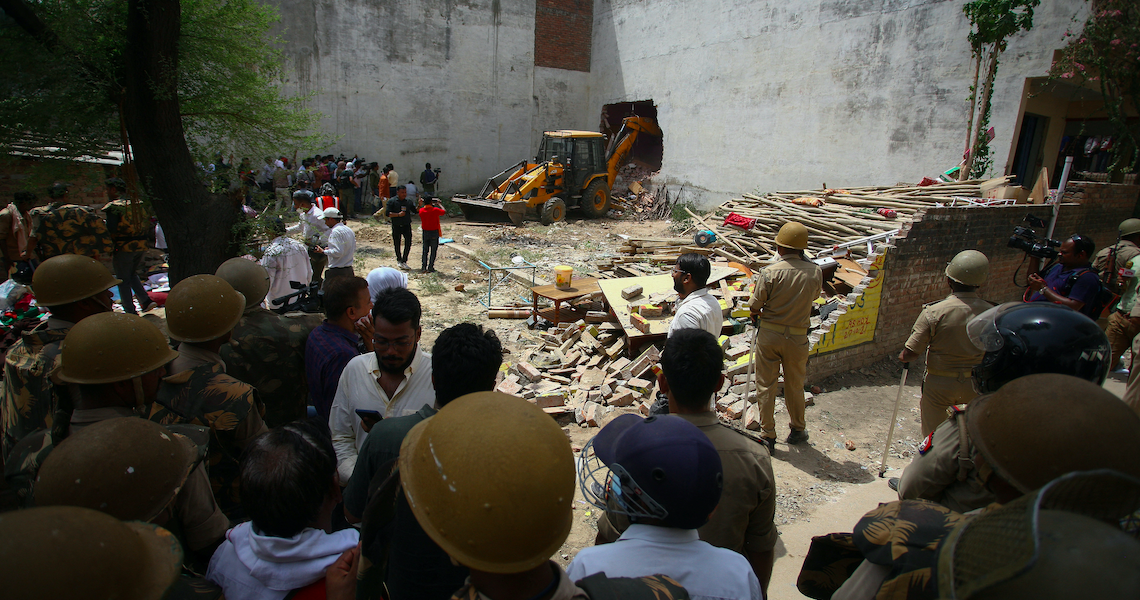 New Delhi: The latest report of the Housing and Land Rights Network (HLRN) on forced evictions in India has pointed to the new disturbing trend of “demolitions as a punitive measure” by various state governments and noted that these “arbitrary acts” of demolishing of homes and structures of minority communities have compounded the vulnerabilities of women, children, older persons, and persons with disabilities.

The report has also highlighted the vulnerabilities of the marginalised sections to forced evictions. It has stated that while “a total of 158 incidents of forced eviction/home demolition have been documented” in 2021, about 15 million people across rural and urban areas continue to face the threat of eviction from their habitats.

While 2021 was a year in which the second wave of the COVID-19 pandemic ravaged India – causing numerous deaths and immense distress – the report noted that even amidst such a humanitarian crisis, the authorities continued with their drives to displace people. Over 59% of the displaced did not even receive any resettlement, partial resettlement or compensation from the state, the report says.

In the preface to the report, executive director of HLRN Enakshi Ganguly wrote that it was “unfortunate that over the years, this situation has only worsened and the magnitude of people displaced has increased despite the intervening pandemic.”

She added that the report also encapsulates the major evictions that were carried out in 2022 (January to July) and “highlights a worrying trend of state demolishing homes as a punitive measure, violating all due process norms and established human rights procedures”.

Overall, the report said, government authorities at central and state levels demolished over 36,480 homes, thereby evicting over 207,100 people from their homes, in 2021. And between January and July 2022, it added that state authorities across the country demolished over 25,800 homes, affecting at least 124,450 people.

‘Demolitions as a punitive measure’

Coming to the issue of governments (in particular those helmed by the BJP) undertaking demolitions as a punitive measure, the report referred to numerous instances where households were demolished as a means of meting out punishment following communal clashes.

The report said “following the communal violence during the celebrations for the Hindu festivals of Ram Navami and Hanuman Jayanti in April 2022 in Madhya Pradesh, 16 houses and 29 shops of Muslim households” were demolished in Khargone district. It added that “statements from government officials and ministers indicated the intention of using demolitions as punishment against those who were viewed by the state as participating in the communal clashes.”

Similarly, the report pointed to demolitions that were carried out in Khambat and Himmatnagar in Gujarat where Muslim families were affected.

The report also pointed out how around 25 shops, vending carts, and houses primarily belonging to Muslims in Jahangirpuri, Delhi was removed after being termed “encroachments” following the clashes during the Hanuman Jayanti procession on April 20, 2022.

In this case, it said, officials from the North Delhi Municipal Corporation (NDMC) arrived with 12 companies of the Central Reserve Police Force (CRPF) and began the demolition drive began early in the morning without adequate notice and continued with the demolition despite an order from the Supreme Court later in the morning to maintain the status quo. A bulldozer demolishes ‘illegal structures’ during a joint anti-encroachment drive by NDMC, PWD, local bodies and the police, in the violence-hit Jahangirpuri area, in New Delhi, April 20, 2022. Photo: PTI

‘Selective demolition in the guise of removing encroachments’

Likewise, in June 2022, the report said, the municipal authorities in Prayagraj and Saharanpur districts of Uttar Pradesh demolished homes of Muslim families allegedly to remove ‘encroachments’ soon after the community members held protests against controversial remarks against the Prophet Muhammad.

In Jirapur village of Madhya Pradesh too, the report said, state authorities demolished 18 homes of Muslim families accused in an altercation that occurred between local Muslim and Dalit communities. It added that around 30 houses were also partially demolished in a predominantly Muslim neighbourhood – allegedly to remove ‘encroachments’ from the area following the incident.

Finding a method in the actions, the report said, “All the evictions and demolitions have been carried out by government agencies professedly to ‘clear encroachments’ and remove ‘illegal structures’ from public land. However, the state authorities have used this reasoning to arbitrarily select and demolish settlements.”

Citing similar actions in various other parts of the country, including Mansarovar Park in Delhi, the report pointed out how in the past, state governments in India have been known to demolish homes of persons accused of rape and other crimes as a punitive measure. But this time, it said, “Recent incidents of demolition highlight forced evictions being used by the government as a measure of punishment.”

UN body had denounced ‘collective punishment’ to the minority community

The HLRN report said the manner in which communities have been targeted through such selective actions has not gone unnoticed. “Taking cognizance of the alarming situation, in June 2022, the United Nations Special Rapporteur on Adequate Housing along with the UN Special Rapporteurs on freedom of religion and minority issues, sent a joint communication to the Government of India strongly condemning the destruction of Muslim homes and properties by state authorities to mete out “collective punishment” to the community,” it said.

The report, the fifth to be brought out since 2017, has also delved into how forced evictions and home demolitions have been continuing with great impunity across the country. “With the state demolishing 36,486 houses in the year, at least 100 homes were destroyed every day. This amounts to at least 567 people being evicted every day or 24 people losing their homes every hour in the year 2021,” it said.

Even during the peak of the second wave of COVID-19, in April and May 2021, the report said over 13,750 people were forcefully evicted from their homes.

57% of evictions in name of forest and wildlife protection

On the reasons being furnished for such evictions, it said, “The maximum percentage of people (57%) were evicted, purportedly, for forest and wildlife protection. This resulted in the forced eviction and displacement of at least 117,623 people across the country.” Apart from this, it said, many were evicted in the name of clearance of ‘encroachments’, beautification of the city or conservation of water bodies.

The report pointed out that “court orders and their implementation by state authorities” resulted in the eviction of over 106,014 people in at least 11 incidents of demolitions.

It said the weaker sections were also badly affected by these actions. “At least 28% of people affected by forced evictions in 2021, for which information is available, belong to marginalised groups, including, Scheduled Castes, Scheduled Tribes, Other Backward Classes, nomadic communities, migrant workers, and Muslims,” it said.

‘Over a million have faced evictions in last five years’

As for the current calendar year, the report said over 1 lakh people have already been evicted in 2022. Between January and July, it said, over 25,800 houses have already been demolished affecting 124,450 people across the country. Overall, it added that nearly a million people have faced evictions over the past five years.

‘Stop demolitions for meting out punishment, follow due process’

In view of the hardship that such evictions and demolitions cause to the affected people, HLRN had also made several recommendations to the central and state governments. It has called for an “immediate moratorium on evictions for any reason”; a stop to demolitions as a means of meting out summary punishment; and adherence to “due process” and ensuring that free, prior, and informed consent of all affected persons is taken before any eviction/ relocation/redevelopment/in situ upgrading project is finalised.

The group had also demanded that all evicted families who have been waiting to be rehabilitated for years be urgently provided alternative accommodation and the rights to land of urban and rural communities should be recognised.

“Forced evictions lead to the displacement of families, loss of homes and livelihood, disruption of children’s education, severe impact on health, and physical and psychological trauma among other consequences. It disproportionately affects marginalised communities and divests them from accessing the most basic facilities, essential for a life with dignity,” it said, hoping that implementation of the recommendations will help bring about justice and restoration of the human rights of affected persons.