Shaheen Bagh Heralds a New Year With Songs of Azaadi

Now into its 18th day, the Shaheen Bagh protests exude warmth in what is one of Delhi's coldest winters. 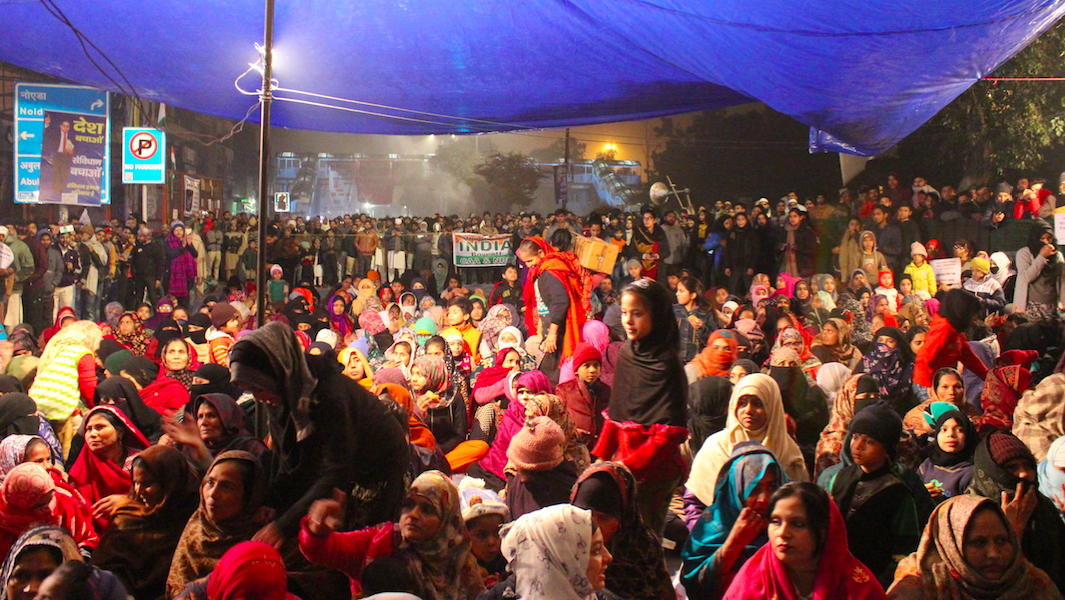 It began simply and without fuss. On the night that Jamia Millia Islamia was attacked, ten women walked out of their homes and onto the road next door that connects Delhi with Uttar Pradesh with a resolve not to move, come what may.

These women who describe themselves as jahil and uneducated, like the 90-year-old great grandma being asked to prove that she is Indian or the 55-year-old mother who educated her son only to find that he has no prospects or the young woman staring at an uncertain future with a 20-day-old baby — are still sitting there as you read this, through a bitterly cold Delhi December, in defense of the Constitution and in a fight they call — kalam ki ladai.

A few hours earlier on that day and on that road, there had been a protest composed of few hundred young men against the new citizenship law. But it couldn’t last. The protest quickly devolved into a showdown with the Delhi police involving stones from one side and rubber bullets from the other. 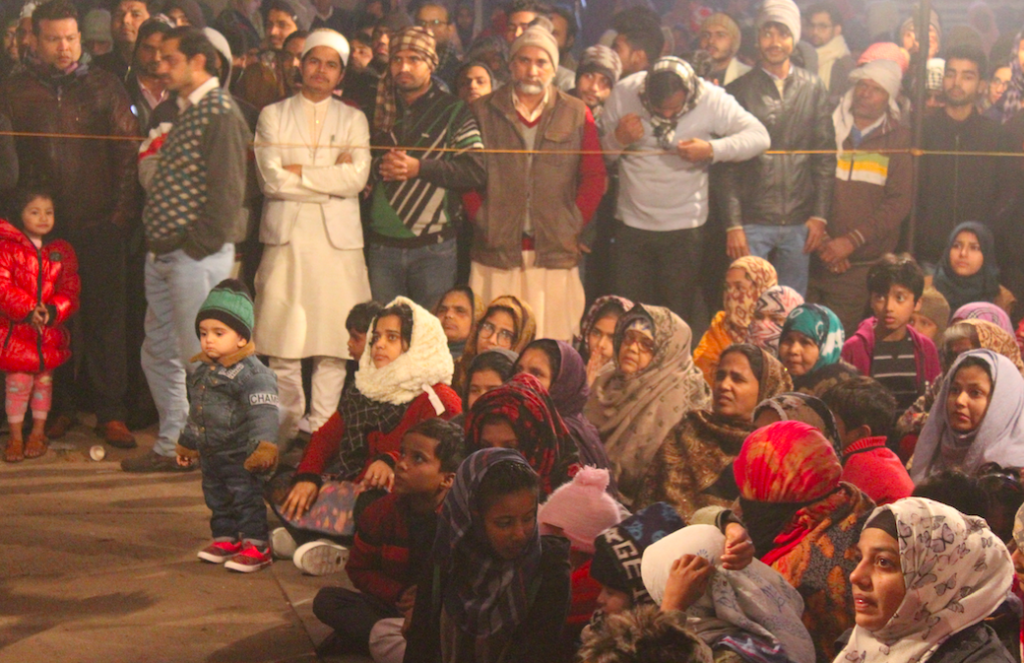 Women with their children at Shaheen Bagh. Photo: Rohan Kathpalia

But when the 10 women, with their boys in tow, walked out on to the road and found a spot a little away from the footbridge where the violence had taken place, the nature, tone and meaning of the protest changed instinctively. The young men gathered in a protective ring around the women and the Shaheen Bagh Protest was born.

A mother of 3 on her 18th day of protest at shaheen bagh has this message for our prime minister on the last day of the decade pic.twitter.com/ufbxbK5oeZ

More women joined, more men came, a tent was pitched and when the crowd got large, a raised stage was erected from where the young, the old, men, women and children began to learn about the Indian constitution and the long fight to protect it.

In public meetings everywhere, whenever there is a crowd facing a stage, there is always a politics that surrounds the raised platform that faces the crowd. This politics is not just about what is said, but also access — who is seen, who addresses the crowd, for how long and in what order. The manch at Shaheen Bagh too has a politics and in spirit and practice, it’s as resolutely democratic and chaotic as this country.

Over the last 18 days and nights that the protest has gone on, the Shaheen Bagh manch has played host to poets and professors, housewives and elders, civil society groups and civic leaders, actors and celebrities and of course students – from Jamia, JNU to the local government school.

The electricity. The power. The magic.

If you are in Delhi and you haven’t come here, PLEASE do.

History is being made. Right here. Right now. Join it. pic.twitter.com/IUQfbXFO4U

Everyday there are speeches and lectures but also shayari and rap. At Shaheen Bagh, the announcers’ primary task at any given point has been to simply streamline the number of people jostling to speak.

And this includes women who are rarely seen out, never mind speak, in public. Sometimes the odd politician shows up too, like Salman Khursheed once did. But they don’t stick around for long.


On the Shaheen Bagh manch, politicians fight for their 15 minutes alongside the local elder known for his shayari and the pony-tailed school girls reciting poetry they just wrote on how we are all one regardless of our religion.

If the Shaheen Bagh stage has a bias, it is towards women and those, from academia and elsewhere, who can educate them not just on CAA-NRC-NPR, but also the freedom struggle, Ambedkar, Gandhi and the ideas that animate the preamble to the constitution.

Next to the stage is a flowchart in Hindi explaining the connection between CAA-NRC. A signboard directing traffic towards Noida has been obscured by a large poster of Ambedkar.

The footbridge under which things had got violent on that first day, now serves as a pelmet to long banners that stream across and below. Even the grilled enclosure around the electricity transformer, is now a people’s gallery of protest art and resistance poetry.

“I won’t give my name — to you or anyone else,” she told me. “And I am not going to show my papers to anyone to prove I belong here. Yeh mulk mera hai.” She refused even a blanket as cold winds whipped Shaheen Bagh protesting against CAA. pic.twitter.com/yRXKPJ8ZkM

When the loudspeaker goes off at midnight, people watch films in the 2 degree cold. Like a BBC documentary on detention centres or the 1981 film Lion of the Desert which tells the story of how a Libyan tribal leader, Omar Mukhtar, fought Mussolini’s army. The message over and over again is that this is not a ‘Hindu vs Muslim’ issue.


This is a fight to save India from Narendra Modi and Amit Shah, and that it’s a fight that must be, by principle, legacy and strategy, non violent.

If the women are the heart and soul of the Shaheen Bagh protest, their arms and legs have been a group of committed young men who work in day and night shifts. Their first duty has been security and keeping the peaceful integrity of the protests. 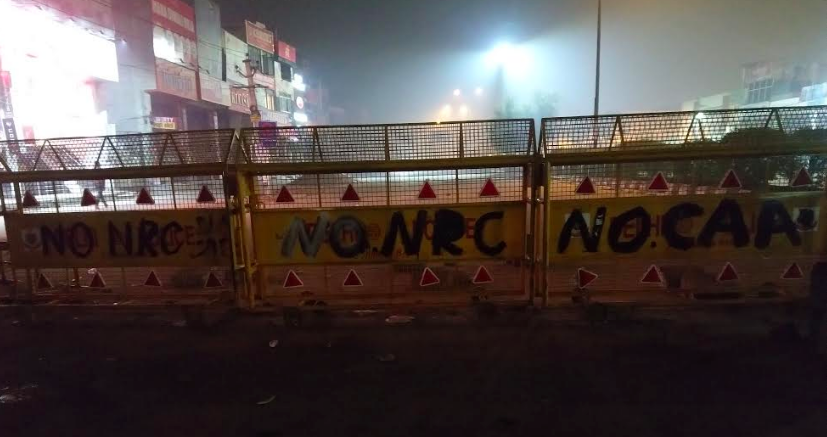 Young men like Mohammad Rameez, 22, studying B-Com in DU who says, “We work in teams to make sure there is no trouble here. Once we were alerted about a bunch of ABVP types trying to enter, but we very firmly and politely asked them to go somewhere else to ‘fix their phones’. You see all these showrooms that are closed along this road, we make sure that no part of their property – shutters, signages, CCTV cameras – are touched. You’ll see ‘NO-CAA’ graffiti everywhere but you won’t see a single one on these shutters.” 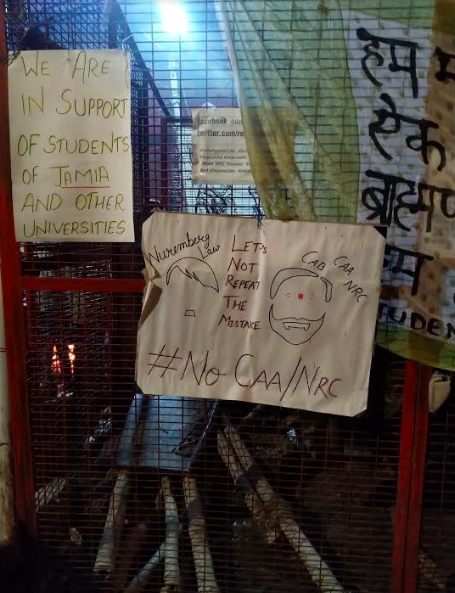 Mohammad Rizwan, 19, who studies interior design at Jamia, says “Arrey, even the cops tell us they are very happy with this protest. We provide them with food, made a place for them to sit and we even made a makeshift toilet for them to use.” The protesters have left one of the lanes free to let in ambulances.

Rizwan adds, “On one of the days when we made way for an ambulance to get through, they thanked us so profusely and said they had never seen a protest that would do this.”

Since the first morning after the women came out on to the streets, food, tea, wood for fire, warm blankets, mattresses, heaters, water, medical supplies have reached Shaheen Bagh from well wishers.  Sometimes the husbands grumble that there is no one to cook at home, but they are quickly shushed and they eat like the rest of Shaheen Bagh on the street.

“People refuse to take payment from us,” says Rizwan. The stuff just appears from inside and outside Shaheen Bagh. “These mall owners, who are both Hindus and Muslims, are suffering because their shops are closed during season, but even they have come out in support. One of them comes everyday sometimes with his family. One Sikh man showed up with food and supplies on the second day,” says Rameez.

These from folks who have been sitting out there 24/7 in the coldest December in decades. https://t.co/3Xv373utUb

Rizwan says that support has come from as far as Faridabad to nearby non-Muslim colonies like Sarita Vihar and Jasola. “Its not a Muslim protest, this. Our non-Muslim friends and classmates from nearby colonies help us everyday and come in solidarity. They want us to organise something similar there.” 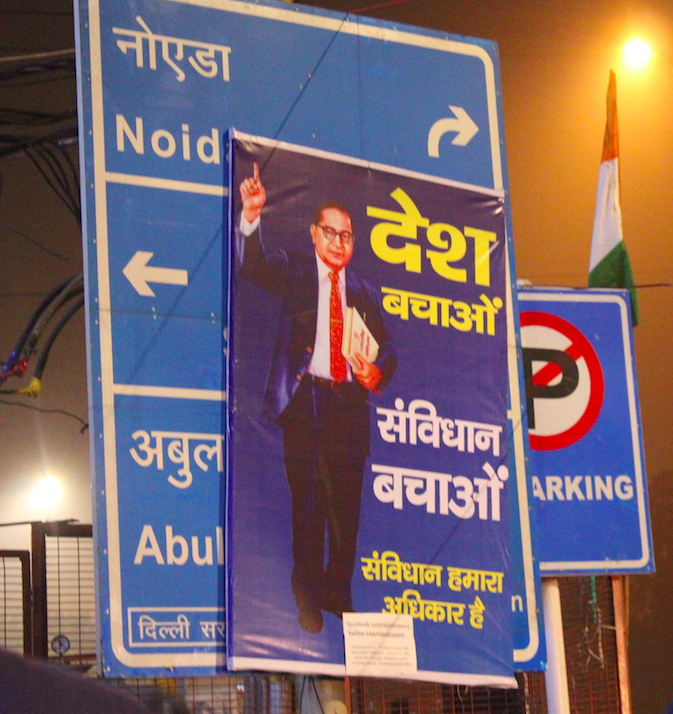 When well-heeled outsiders from posh south Delhi come, residents of Shaheen Bagh sometimes thank them, and they are thanked by these outsiders in return. ‘No-CAA’ and ‘no-NRC’ stickers are now found everywhere from the local cafe, to ATM doors to a briefly lived phase on Christmas Day when it was found on Santa Claus hats. Children run around the little streets shouting “Inquilab”, “Azadi” and in one instance “Hindu-Muslim-Sikh sipahi”.

Some of the older influential local organisers with political connections, finding themselves outside the center, grumble with resentment at real and imagined concerns.

When they go to the cops for help dismantling the protest, the cops tell them to handle it themselves. But the problem for them is that Shaheen Bagh is behind the protest. No one dares speak to the women directly. And without a leader, who do they approach?

The 55-year-old woman next to her tells me, “When the poor like us have to move, we move with the clothes on our back and whatever we can carry. He is going to come and ask us for our papers? Enough. Now every small thing he does we will be on the streets. This is desh ki ladai. If we stay silent now, we have to give the almighty an accounting of our silence. Better that I speak now and die in the land in which I was born. Modi eats a full meal and feels cold in this winter. We eat namak and roti and we are burning with heat.”