While the state government claimed in court that all workers are safe from COVID-19, workers tell The Wire they have poor or no equipment. 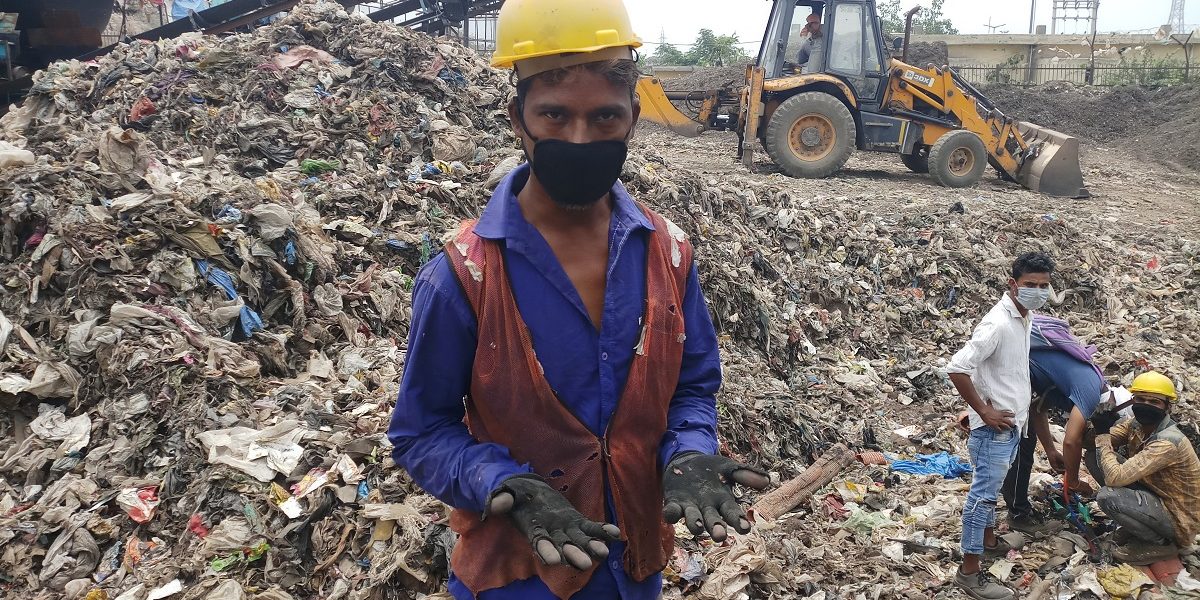 A sanitation worker employed on daily wage does not have an N-95 mask and only tattered gloves near the trommels installed at Karnal bypass on May 13, 2020. Photo: Prabhjit Singh

New Delhi: In the foetid solid waste room at the garbage dump on the road dividing Rohini and Mangolpuri in northwest Delhi, Saif-ud-Din and Miraz, both in their teens, scavenge for scraps of cardboard and plastic which they will sell to recyclers to earn a living. Neither of them wore gloves or masks, despite the fact that the number of people affected by COVID-19 in India is rising every day.

Saif had been there for an hour and had already filled his tricycle-cart with reusable and recyclable waste. He was delighted. But he had no idea that he and his colleagues are at high risk of being infected by the novel coronavirus. No one had told him he needs to wear a mask and gloves. No one had offered him personal protection equipment (PPE). Saif-ud-Din, a waste picker, at a dumping site in the residential suburbs of Mangolpuri in New Delhi. Photo: Prabhjit Singh

On May 8, Delhi’s municipal authority and the Delhi government’s health department had assured the Delhi high court that they were following the guidelines issued by the World Health Organisation (WHO) to deal with the COVID-19 pandemic and that sanitation workers are adequately protected.

They were responding to a petition filed on April 28, by the Municipal Safai Kamgar and Harnam Singh, a former chairman of the Delhi Commission for Safai Karamchari, against the Central and state governments on the issue. Among other things, the petition stated: “Not only is the safety of the sanitation workers being compromised, but they have not been paid their monthly salary for the last two months.”

Despite the assurances given in the high court, all it took The Wire was one journey around Delhi to note that the people cleaning the gutters and working at the large dumping site at the Karnal bypass are hazardously ill-equipped. Few workers had gloves. Masks were being reused and appeared worn out. Many of the workers wore handkerchiefs over their mouths and noses because they had no masks.

Also Read: Sanitation Workers: At the Bottom of the Frontline Against COVID-19?

Ahmed wore a tattered pair of gloves and a worn-out cotton mask as he picked up the stones that fell from the conveyor belts of the trommel (garbage segregation micro plant) at the Karnal bypass garbage dumping ground. When The Wire asked Ahmed about PPE, a co-worker signalled that he was not to speak.

Like Ahmed, all the men working at the trommels are on contract. No one wore an N-95 mask and their gloves had worn out within a few days of work.

The junior engineer in charge of the site, however, did wear an N-95 mask and cautioned this journalist to stay far from his desk. “I am not authorised to speak,” he said, but provided a phone number for Rajesh Sharma, an executive engineer with the North Delhi Municipal Corporation (NDMC). Sharma, in turn, put the onus on his colleague A.S. Yadav, another executive engineer in the NDMC. Yadav did not answer his phone.

In Rohini, near the Rithala Metro station, Sagar stood inside a gutter as part of a roadside sewerage cleaning operation assigned to a private contractor by the Public Works Department (PWD). Working on contract, he had no mask and no gloves. 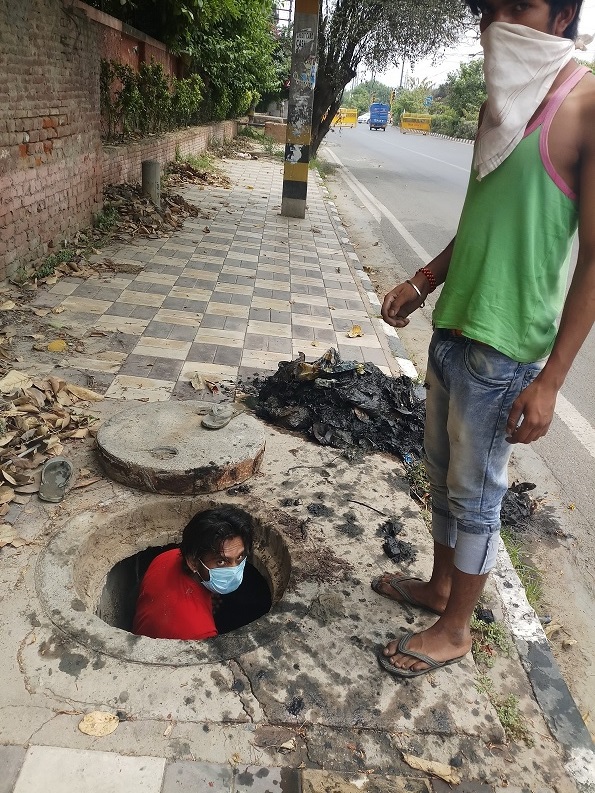 Sanitation worker Sagar cleans a gutter in Rohini on May 13, 2020. Photo: Prabhjit Singh

The WHO’s ‘interim guidance’ document dated March 19 says that sanitation workers must wear appropriate PPE, including protective outwear, gloves, boots, goggles or a face shield and a mask while carrying out their duties.

In a speech on May 12, Prime Minister Narendra Modi claimed that “the 21st century belongs to India” and “two lakh PPE kits and two lakh N-95 masks are manufactured in India daily.”

But it appears that none of these kits and masks are for sanitation workers, the people with the highest risk of COVID-19 infection as they clean gutters and sewers and collect household garbage.

So far, the Delhi high court has held two hearings of the writ petition filed by the Municipal Safai Kamgar and Harnam Singh. The next hearing will be on June 1, when the court will deal with the replies of the Centre, the Delhi government and the three different municipal bodies.

The petition states that safety equipment is “not being provided to the sanitation workers as mandatory as per the Supreme Court order.” It continues: “The situation is worsening with the sanitation workers left being exposed to Covid-19 without adequate and mandatory equipment and some of them have contracted the virus exposing their families and communities to the disease.”

He continued: “The replies in the courts are wishy-washy. The government or local bodies like the East Municipal Corporation of Delhi or the NDMC should show their tenders, if any, for N-95 masks if they want to emerge from this PIL clean. Earlier, the solicitor general had also told the Supreme Court about the provision of proper PPE kits and N-95 masks to sanitation workers, which is not true. Now they face the matter in the high court.”

In its reply to the petition, the Delhi government had submitted a “correct factual position” during the high court hearing, which stated: “No staff, sanitation or others, are exposed to the virus as the Personal Protective Equipment and masks etc. are being provided to them.”

Meanwhile, the Centre has shifted the accountability to the states because health is a state subject. In response to the petition, the Central government said that it had earlier submitted a ‘status note’ in the Supreme Court which stated that the government had taken “a policy decision to accept the WHO guidelines for sanitary workers as binding and the same are being followed meticulously.”

Also Read: Sanitation Workers Holding the Fort Against COVID-19 Have No Protective Equipment

In a letter to Delhi chief minister Arvind Kejriwal, dated March 26, Chitra Mukherjee, head of an NGO called Chintan, said garbage collectors service 87% of the citizens of Delhi and they also require the Rs 5,000 grant announced by the Delhi government for construction workers during the COVID-19 lockdown. “They are losing their livelihood and they have no equipment. We have been pushing the chief minister to provide them with protective kits,” she told The Wire.

“Waste pickers are completely ignored,” said Mukherjee. “Nobody talks about them, but if they did not exist, then much of India’s recycling process will collapse.”