“Although ABVP activists are seen speaking on camera that they organised the mob to attack students of JNU, Delhi Police has been busy in implicating students who have been protesting.” 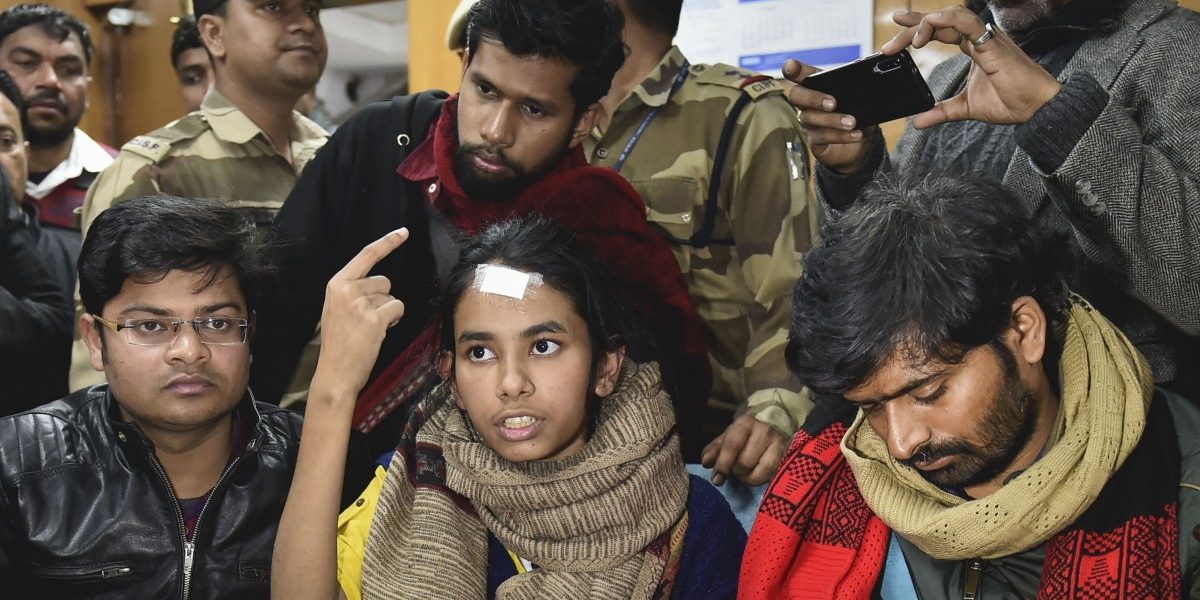 New Delhi: The Jawaharlal Nehru University Students’ Union (JNUSU) on Saturday accused the Delhi Police of shielding the Rashtriya Swayamsevak Sangh-backed Akhil Bharatiya Vidyarthi Parishad (ABVP) and a few faculty members who, according to the Union, helped the masked mob enter the campus to unleash a brutal attack on students and teachers on January 5.

At a press briefing, a day after the Delhi Police named eight students including the JNUSU president Aishe Ghosh, as suspects in the JNU violence case, all four JNUSU office bearers came out to detail the sequence of events that eventually led to the January 5 mob attack on the campus.

They alleged that while the Delhi Police has portrayed the JNU violence case as a result of a clash between “Right” and “Left”, it was in fact a ABVP-led attack, assisted by some newly-recruited faculty members who sympathise with the saffron students’ group and the university administration helmed by vice-chancellor M. Jagadesh Kumar.

“Although ABVP activists are seen speaking on camera that they organised the mob to attack students of JNU, Delhi Police has been busy in implicating students who have been protesting,” said JNUSU vice-president Saket Moon, referring to the 70-day-long students’ strike on campus against an unprecedented 300% hike in tuition and hostel fees.

He narrated the sequence of events that culminated in the mob attack. “Since October 28, 2019, students have been protesting against fee hike. They assembled in their respective centres and school almost every morning to show their dissent,” he said, adding that JNUSU had also decided to boycott semester registration that started on January 1, 2020.

“Everything went about more or less peacefully until January 4,” he said.

According to Moon, at around 6 am, a few masked guards were seen moving aggressively towards a group of protesting students who sat in front of the School of Biotechnology (SBT). Alarmed, students made many SOS calls to JNUSU office-bearers. When Aishe Ghosh reached there at around 7 am, the masked guards allegedly slapped and assaulted her. He said a few ABVP students also joined the guards to beat up protesting students.

It is after this incident, according to various students, that the protesting group switched off the main switch of the CIS server system which is near the SBT in protest.

However, the situation soon escalated as ABVP leaders on campus mobilised their activists in front of the School of International Studies between 10 am to noon. Moon claimed that faculty members like Tapan Kumar Bihari, Ashwini Mohapatra, Jaikhlong Basumatary and Nagendra Srinivas came in support of the ABVP and led the group which assaulted many students, including many women, through the day. He also alleged that the said teachers repeatedly provoked the ABVP activists to beat up protesting students.

On the same day, the ABVP mob gathered at various places of the university and assaulted many students without any provocation. Moon said, “All this happened in the presence of the police personnel who were stationed in JNU since 23 December.”

Following the violence, JNUSU called for a peace march on January 4 evening.

On the morning of January 5, ABVP members gathered again in front of the School of International Studies and assaulted protesting students under the leadership of faculty members Tapan Bihari and Jaikhlog Basumatary, JNUSU office bearers said.

After this initial round of violence, ABVP activists started moving towards the administration block where they clashed with students who had gathered to boycott the registration process. “By this time, the ABVP mob had swelled to around 50 people. JNUSU also mobilised more students to stop this unprovoked violence,” said Moon.

When it looked as if the matter may escalate, Aishe Ghosh, JNUSU president, called up the Vasant Kunj Police Station and informed police officer Sanjeev Mandal about the violent incidents. Ghosh said he assured that they will send police personnel to control the situation.

However, soon after this, JNUSU alleged that a larger ABVP-backed mob had gathered outside Tapan Kumar Bihari’s house. “Tapan Bihari is the warden of Periyar hostel. Many students even saw him wielding a stick along with the mob. They started beating up anyone who they thought supported the strike. It was completely unprovoked,” said Moon.

“I went to the spot once I started getting a lot of SOS calls about the attack outside Periyar hostel. I saw a police truck right there but they took no action against the mob which went about beating up regular students of the campus,” Ghosh chipped in, adding that the ABVP activists were now throwing stones and hurling bricks at students. This was around 3:45 pm.

Moon said that they received information that the ABVP leaders and some faculty members were assisting outsiders to get into the campus from different gates at around 4:30 pm.

This mob, according to JNUSU, started moving towards Sabarmati hostel where JNU Teachers’ Association had called for a peace meeting. “By this time the mob had become bigger. They were masked and had rods, sticks, bricks with which they attacked both students and teachers.”

This mob then went about unleashing violence at different places of the university. “It destroyed property, entered students rooms in hostels and targeted especially Kashmiri Muslims,” Moon said, referring to the masked mob attack from 6 to 8 p.m on the evening of January 5.

“There is an environment of fear. We do not feel safe anymore in the campus,” said Ghosh. She said that it is clear that administration and ABVP were complicit in the mob attack on students. “Delhi Police’s narrative of what happened is eerily similar to what the ABVP and administration have been saying,” she said.

“Why has no action been taken against ABVP members yet, although the police seems to be in a hurry to implicate protesting students. Is the police trying to save them,” she asked, adding, “Let me be clear. We are not afraid of your FIRs.”

Also read: JNU and the Pathology of the Right

The JNUSU named many ABVP members and a few faculty members who were seen participating in attacks on students. It also released videos which show them as part of the mob, demanding an inquiry against them. It also showed emails sent from JNU administration from the time when the registrar had claimed the servers were down. The JNUSU said that servers were functioning throughout and there was no grave damage to them because of the protesting students.

The Union slammed the police for not taking such evidence into account. “They did not try to control the mob even while they were here. Once the mob fled, they got in and declared that they have restored normalcy in campus. Is this the way police functions,” Ghosh asked.

This is not a clash between “right and left. It is a question of right and wrong,” she said.

Ghosh later announced that the JNUSU will partly take back its protest after the MHRD agreed to roll back its escalated fee. “We will now register but pay only academic fees i.e Rs 108 for M.A students and Rs 120 for M.Phil and Ph.D students. We will not pay even a single penny of the new hostel and utility fee. If we have to carry on our movement for ever to resist the new fee structure, we will do that,” Ghosh said, as students cheered.