Yechury, Yogendra Yadav and Apoorvanand react after coming under the police scanner in an investigation that has aimed to draw direct links between peaceful CAA protesters and rioters. 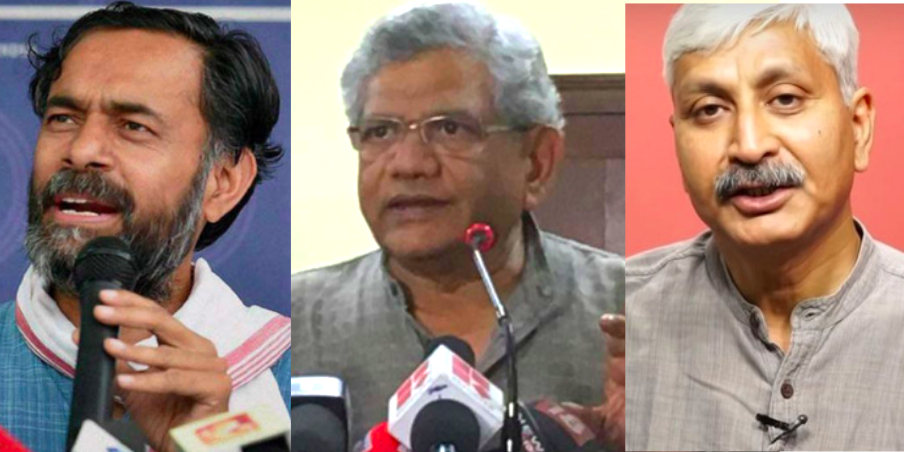 New Delhi: General secretary of the Communist Party of India (Marxist), Sitaram Yechury hit out at the Delhi police’s investigation into the February riots, in which several students and civil liberties’ activists have been arrested.

On Sunday, the Delhi Police tweeted a purported clarification on the inclusion of Yadav, Ghosh and Yechury’s names.

Responding to the allegation that he gave a speech to “provoke and mobilise” the anti-Citizenship Amendment Act (CAA) protestors at the Jafrabad sit-in, Yechury tweeted, “Delhi Police is under the Centre and Home Ministry. Its illegitimate, illegal actions are a direct outcome of the politics of BJP’s top leadership.”

Delhi Police is under the Centre and Home Ministry. Its illegitimate, illegal actions are a direct outcome of the politics of BJP’s top leadership. They are scared of legitimate peaceful protests by mainstream political parties & are misusing state power to target the Opposition https://t.co/8uGr4x1ylC

Dipankar Bhattacharya, general secretary of the CPIML (Liberation) party has also released a statement decrying the ‘witch hunt’ of teachers and students in the probe into the February violence.

Noting that the probe by Delhi police is “becoming more vindictive and farcical with every passing day,” Bhattacharya added that the naming of academics and activists is taking place when, “the government is in the dock: accused by India’s people of making India the worst COVID-19 affected country in the world; of destroying the economy and people’s livelihoods; of attacking the rights of workers and farmers; and of seeking to destroy India’s constitutional democracy.”

“The same government is seeking to divert attention from its own crimes, by manufacturing accusations against its critics, and using the police and investigative agencies to arrest and incarcerate innocents under draconian laws,” he added.

Meanwhile, Delhi police tweeted to say that Yechury, Yadav and Ghosh have not been “arraigned as accused” in the supplementary chargesheet.

It is clarified that Shri Sitaram Yechury, Shri Yogendra Yadav and Smt Jayati Ghosh have not been arraigned as accused in the supplementary chargesheet filed by Delhi Police.

However, it is unclear why despite the accused person clearly refusing to sign the disclosure statements, the Delhi police included them in the chargesheet. Moreover, the police have also not clarified on what basis it has linked intellectuals and leaders of different political hues with its “conspiracy” theory that anti-CAA protesters worked in a group to precipitate communal violence in Delhi.

Asking the news agency PTI to withdraw a tweet which notified without any elaboration that the Delhi police named him and others as “co-conspirators”, Yogendra Yadav said, “This is factually incorrect report, hope @PTI_News withdraws it. Supplementary chargesheet does NOT mention me as co-conspirator, or even as accused. One passing reference to me and Yechury, in an unauthenticated police statement (not admissible in court) by one accused.”

This is factually incorrect report, hope @PTI_News withdraws it.
Supplementary chargesheet does NOT mention me as co-conspirator, or even as accused. One passing reference to me and Yechury, in an unauthenticated police statement (not admissible in court) by one accused. https://t.co/QurXmQdOr2

He also tweeted a page of the chargesheet where his name has been referred.

This is the only reference to me in the supplementary chargesheet. Hope @PTI_News withdraws the misleading news flash. pic.twitter.com/MlrX2Q8Fx4

The names of these personalities emerged in the disclosure statement of Gulfisha Fathima, who had recently associated herself with the women’s collective Pinjra Tod. The statement is a part of the supplementary charge sheet the Delhi police filed in FIR 50/20, against Fathima and two founding members of Pinjra Tod, Devangana Kalita and Natasha Narwal.

The supplementary charge sheet, which largely probes the activists’ role in Jafrabad communal violence on February 23 itself, makes a series of wide-ranging connections between politically-varied groups and individuals to illustrate their purported complicity in the February violence at Delhi.

Fathima’s disclosure statement, on the other hand, alleged that leaders like Yechury, Yadav, Bhim Army chief Chandrasekhar and others planned their speeches at the Jafrabad sit-in to provoke and “a feeling of discontent” among Muslims against CAA.

Apoorvanand, responding to the allegation, had told The Wire earlier that the Delhi police probe into the riots is strangely similar to the Bhima Koregaon case in which several public intellectuals, professionals, and activists who have been critical of the Union government have been arrested. He said that the investigations were an ideologically-charged, unprofessional, and a ‘scripted’ exercise to “criminalise anti-CAA protests and protestors.”

Later in a statement, he said, “These names are mentioned in uncorroborated statements attributed to accused who are in custody, where it is claimed that they provided support in organising the anti-CAA protests.”

“Although FIR 50/20 was registered in connection with the death, from a gunshot injury, of one Amaan, the investigation seems to have focussed on delegitimising the protests and in trying to make the protestors indirectly responsible for Amaan’s death.

He said while he has not been named as an accused, he expressed surprise that the Delhi police should even accuse three young women of having murdered a 17-year-old boy, Amaan. He further said that young women have been accused of instigating a shooter, but the probe has not revealed who shot Amaan but it insists that “whoever it was, was instigated by the anti-CAA stance of the accused individuals.”

Apoorvanand also cited the Delhi high court hearing of the Kalita’s bail application on September 1, when it pulled up the Delhi police for not providing any evidence of an incendiary speech by her. “The court also said that the statements of the witnesses were produced belatedly, as an afterthought by the police,” the Delhi university professor said. Note: This article has been updated to add the responses of the Delhi Police and Dipankar Bhattacharya, along with Apoorvanand’s statement.