In the wake of Umar Khalid's arrests, activists and journalists called for a special panel to look into the partisan approach the Delhi police was taking in the riots probe. 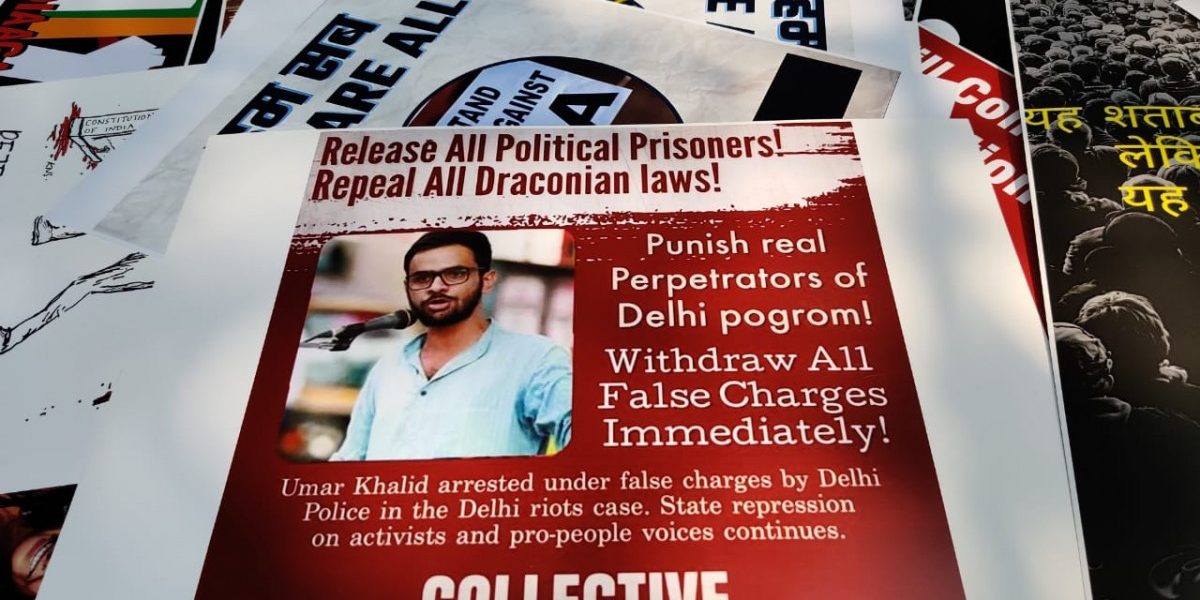 A poster urging for the release of Umar Khalid. Photo: Ismat Ara

New Delhi: The investigation into the Delhi riots is a criminal conspiracy in the name of a probe, targeted to frame innocent people who were protesting peacefully against an unconstitutional law, activists and journalists alleged on Wednesday in a press conference.

The press meet came two days after student leader Umar Khalid’s arrest. Khalid, held in connection with the riot, has been charged with sedition under the stringent Unlawful Activities (Prevention) Act, and 18 sections of the Indian Penal Code.

The special cell of the Delhi police had arrested Khalid after about 10 hours of questioning. The Delhi Police has sought 10 days of police custody for Khalid to file a chargesheet on the basis of what it claims is a stash of data amounting to more than 40 GB to unearth the “deep-rooted conspiracy behind Delhi riots”. 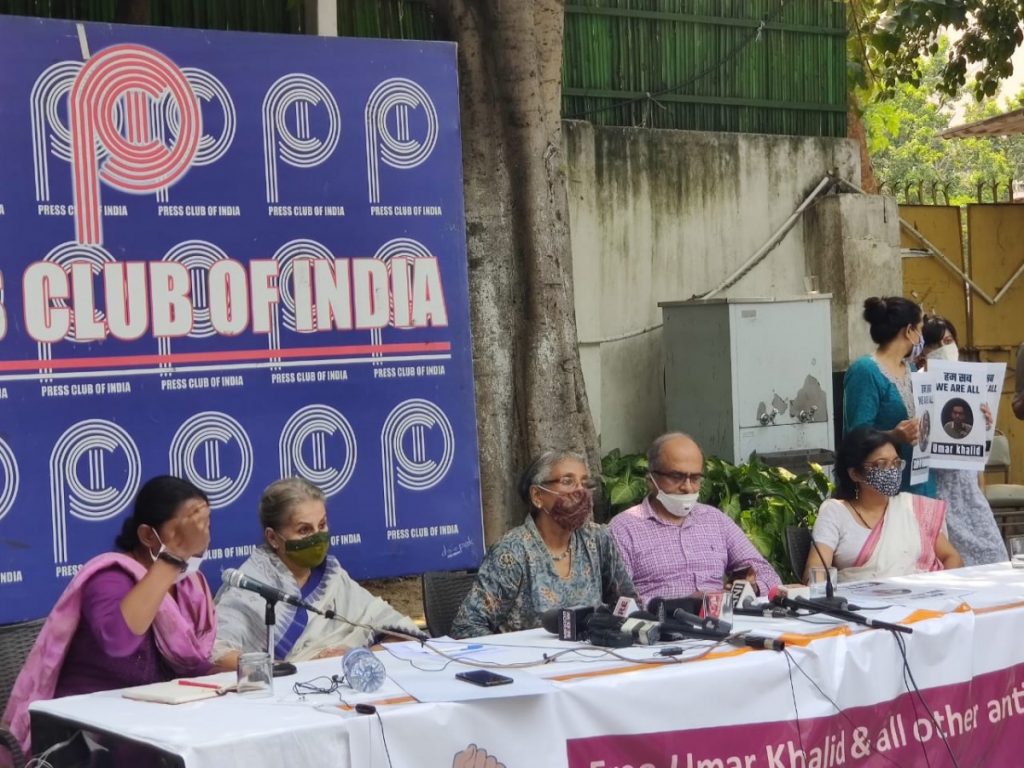 The speakers at the press conference. Photo: Ismat Ara

The police claimed that Khalid had, in a speech given in Amravati, instigated the people and called for violence during US president Donald Trump’s visit to India.

A video of Umar Khalid, made by him a few days before his arrest, was played in the press conference. In the clip, Khalid can be seen talking about a “false narrative” had been created against him by using his Amravati speech selectively. He also said that the BJP government is targeting those who opposed the CAA.

Watch: Umar Khalid, the courageous son of India, just before being arrested pic.twitter.com/H9nKaGlRQ4

“Twenty seconds from my 15-20 minute-long speech is being used to create a fake narrative about me. They are attempting to incarcerate everyone who is critical of the government. What is my crime? Anybody who speaks against the divisive politics [of the BJP] is being arrested,” says Khalid in the video.

He then added, “They are scaring us, and also you all. But don’t be scared. Raise your voice against injustice. Speak against all injustice.” He also alleged that the real rioters who actively committed acts of violence during the Delhi riots are not being arrested.

Syeda Hameed recalled the violence at the Jamia Millia Islamia campus in December, 2019. She said, “I live in Jamia. That day is still running in my head like a film when all boundaries were crossed and distressed students had taken refuge in my house.”

She recited a couplet,

(‘What is this tradition of keeping quiet in your world,
My tongue longs to speak here.’)

She then said that the cost of dissenting in the country is incarceration. “We all have seen the treatment towards people who have dissented, and we have cried tears of blood. What were these young students doing? Was the young women’s crime that they tried to save others from getting thrashed by the police? What were the crimes of Safoora Zargar, Devangana Kalita and Umar Khalid? They are trying to invert the narrative and this is how they are doing it. When we initially saw such a big movement headed by young people in Jamia, we thought, finally things are changing. But they have now created a new narrative, that of Delhi riots, 2020.”

She also said that Muslims and other “oppressed sections” of the society are being targeted and that the country is moving towards theocracy very fast. “Their goal is to put an end to the composite culture in our country.” She also said that BJP leaders such as Kapil Mishra, Anurag Thakur and Parmesh Verma are roaming free despite inciting crowds on record.

Advocate Prashant Bhushan alleged that there is an ongoing conspiracy against people who protested against the CAA. “The investigation into Delhi riots is not an investigation but a conspiracy. The saying “Andheri nagri, chaupat raja” fits perfectly in this country.”

Talking about the anti-CAA protests, he said that they were exemplary examples of peaceful protests. “The constitution was being taught to kids. It was an example of brotherhood. Now police is saying that this was a conspiracy. Umar Khalid, Apoorvanand, Harsh Mander, all their speeches are recorded on video. They [Delhi police] say that a WhatsApp group was made. If you read all the messages, you will realise that the purpose was to support peaceful, exemplary protests.”

He said that Umar Khalid and others in the WhatsApp group could not even have been aware of the details of the US president’s visit to India at the time when police are saying he had called for violence during Trump’s visit. 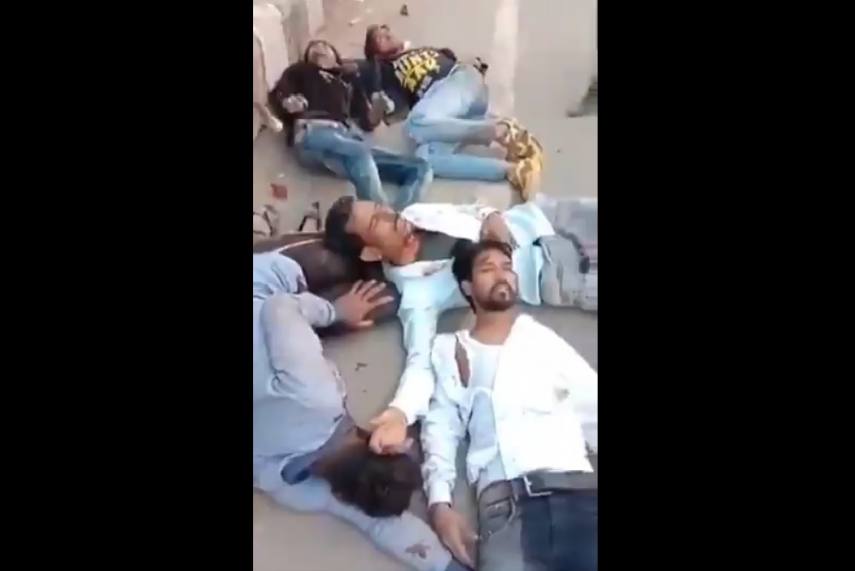 He also said that police too has been responsible for killing people during the riots, referring to Faizan, the 23-year-old who was filmed while being forced to sing the National Anthem in a visibly injured state. He said, “No action has been taken against such policemen. There is a criminal conspiracy by the Delhi police in the name of investigation, to frame innocent people who were protesting peacefully against an unconstitutional law and to protect those against whom unimpeachable evidence is available.”

He called for a separate committee to look into the Delhi police’s investigation.

Nandita Narayan, former Delhi University Teachers’ Association chief quoted Umar Khalid’s speech, “[He said] …if they arrest us, we will go to jail smiling. Is this inciting? What about “Desh ke gaddaron ko, goli maaro saalon ko“? Devangana Kalita, Natasha Narwal, Umar Khalid have all grown up in front of our eyes. We know how idealistic they are. They have a clean heart, and have kept the true meaning of education alive, and have been excellent academicians. Apoorvanand is a role model to students. They are now facing attack for wanting to improve our constitution.”

She also said that activists implicated in the Bhima Koregaon case such as Sudha Bharadwaj had “so much potential.” Comparing Hindutva in India to white supremacists in the US, she said, “Hindtutva for Hindusim what ISIS and Taliban are for Islam. She called the investigation into the Delhi riots a third wave of violence, after mob lynchings and the Delhi riots.

Kavita Krishnan echoed her when she said, “They have data close to 11 lakh pages against students such as Umar Khalid. But on the migrant labourers crisis, not even one page. This is a deliberate attempt to silence people who dissent. The government doesn’t care at all about the poor in their own country.”

She also expressed concern over the SSF which has been introduced in Uttar Pradesh. “The police will be used as a personal army as was done during the Gujarat pogrom. Umar Khalid’s speech has talked about love. Komal Sharma and Kapil Mishra have not been implicated. This shows that your plan is now evident to the public. I just want to say, in the end, that we are all one. Arrest us all.”

All speakers expressed anger over BJP leaders who made “inciting” speeches before the Delhi riots and have not been named in any of the FIRs.