The activists behind the citizenship protests did not need to organise a riot to attract global media coverage and international criticism of the Modi government. The record shows there was no shortage of either. 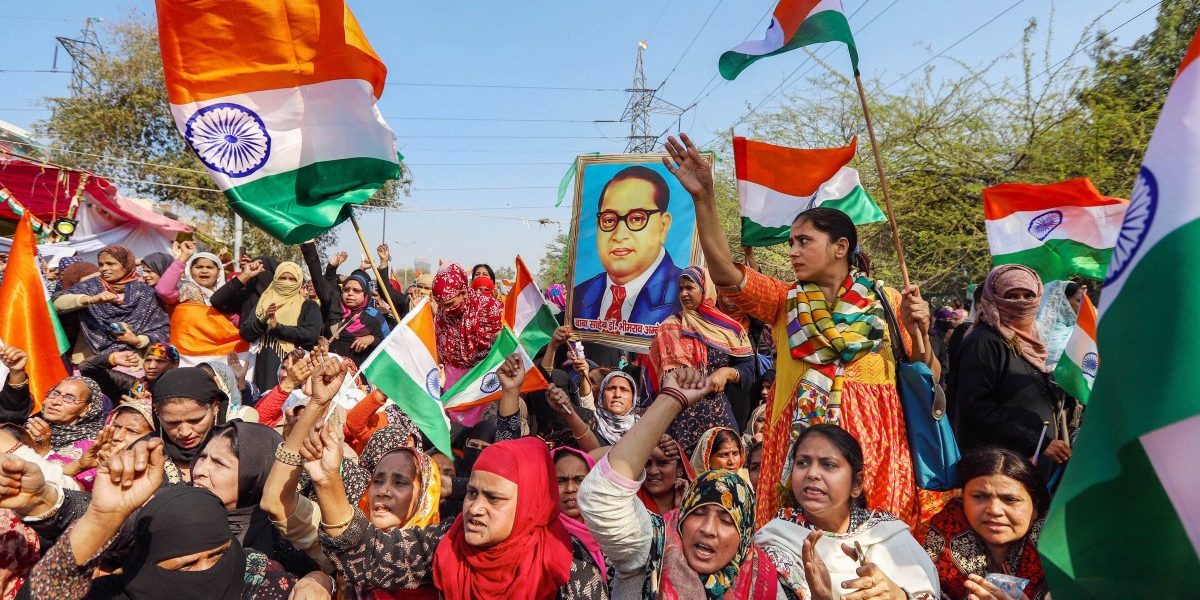 New Delhi: Almost all of the Delhi riot cases that the Delhi Police is investigating are based on the premise that the riots were planned by anti-CAA protesters to coincide with US President Donald Trump’s visit to India in the third week of February.

The assumption is that anti-CAA protesters were looking for publicity and knew that any sort of violence during Trump’s visit would be amplified before an international audience by the international press, and embarrass the Indian government. This hypothesis is the foundation over which the police has based its entire case – building in effect a quintessential ‘house of cards’.

All the accusations are based on the presumption that the world had no idea that the Narendra Modi government had passed a law in parliament that openly discriminated against Muslims and which – when combined with the National Register of Citizens or NRC – would create the possibility for the disenfranchisement of millions of Indian Muslims. Conspiracy theories floated by the police in its ‘blank cheque’ FIRs and chargesheets seem to have assumed that protests against the Modi government’s discriminatory citizenship law had not already attracted the world’s attention and that the protesters needed a big publicity stunt.

Thus, the chargesheet filed by the Delhi Police in Karkadooma court for FIR 65/2020, registered at the Dayalpur Police Station, into the murder of IB officer Ankit Sharma speaks of a conspiracy to organise riots to embarrass the Central government:

“During investigation, it was also revealed that the accused Tahir Hussain was in touch with Khalid Saifi who is connected with Unite Against Hate Group. Tahir Hussain was also connected to Umar Khalid of JNU through Khalid Saifi. Khalid Saifi had arranged Tahir’s meeting with Umar Khalid on 08.01.2020 at Saheen Bagh (Shaheen Bagh). In that meeting it was decided to have a big blast so that the Central Govt. could be shaken on the issue of CAA/NRC and so as to defame the country in the international arena…These riots were planned to occur during or prior to the visit of US President Donald Trump in the month of February, 2020.”

Advocate Javed Ali, who is representing Aam Admi Party councillor Tahir Hussain, claims that a second chargesheet filed by the police in connection with FIR 101 also alludes to an alleged conspiracy to stage communal riots during US President Donald Trump’s visit in February. Javed says, ‘Two separate chargesheets filed by the police in connection with FIR 101 and FIR 65 are almost identical barring the inclusion of a murder charge in one. It is almost as if one chargesheet is being used as a cross reference for the other’.

The same theory has been shared by the Delhi Police in FIR 59/2020 which was registered by the Crime Branch and is now being investigated by the Special Cell. The police is yet to file a chargesheet in the case but the FIR claims that a police officer was told by an informer that communal riots that took place in Delhi between 24 to 26 February were part of a pre-planned conspiracy to defame India. The FIR says that JNU student Umar Khalid gave two provocative speeches where he appealed for roads to be blocked in the national capital during US President Donald Trump’s visit. According to the FIR, the idea behind the plan was to spread ‘propaganda’, on an international level, that minorities in India are being tortured. Delhi Police’s Special Cell has added sections of the stringent anti-terror law UAPA to this FIR and used it to arrest Khalid Saifi, Ishrat Jehan, Shafi Ur Rehman, Jamia Millia Ismalia students Meeran Haider and Safoora Zargar, and JNU students Natasha Narwal and Devagana Kalita.

One glaring error in the police chargesheet has already been widely reported. The police claim that the meeting where the conspiracy to organise a riot during Trump’s visit was allegedly hatched took place on January 8, 2020, whereas the news of the visit was only made public at least five days later.

Even if we leave aside this fundamental error of fact and assume that the “conspiracy” was hatched not on January 8 but on some later date, the police charge sheets make two essential claims about the motive for the conspiracy which are hard to reconcile with the facts:

1. The anti-CAA protesters were hungry for publicity and wanted to make a splash during US President Donald Trump’s visit.

2. The conspiracy was to embarrass the government for its new citizenship law.

No shortage of world media coverage

Were anti-CAA protesters starved for publicity? Were the women of Shaheen Bagh and similar protest sites – who said they were fighting for their fundamental rights – eager to make global headlines? Had protests against the CAA and NRC really gone unnoticed by the national and international press?

Judging by news coverage across the world in January and February, the anti-CAA protest at Delhi’s Shaheen Bagh had already captured the attention of the world media. In Delhi and across the country, several protest sites had come up on the Shaheen Bagh model where ordinary women from Muslim ghettoes were staging sit-in demonstrations. These protests had been covered by almost every international news agency, channel and newspaper.  From BBC and CNN to Al Jazeera, from the Washington Post and New York Times to Reuters, AP, AFP, EFE (in Spanish) – every news organisation that claims to have a global footprint had carried multiple stories about the protests and the discriminatory law that had impelled ordinary Muslim women to come out of their homes and protest on the streets .

Here are a few examples of stories that were published well before the Delhi violence:

They tried to stifle the voices of our children’: Meet the women protesters who have been occupying a New Delhi street for a month (January 15, 2020)
In photos: Protesters rally against India’s citizenship bill (January 28, 2020)

In India, Protesters and Modi Tussle Over Who Can Claim Gandhi (January 30, 2020)

‘Women Don’t Give Up.’ Why Female Protesters Are at the Forefront of India’s Resistance Movement (January 15, 2020)

Modi Hardens Stance Against Protesters Who Hold the Line (December 27, 2020)

In India, a giant sit-in of Muslim women against a law deemed discriminatory (January 2, 2020)

The fact is that by the first week of January, the anti-CAA protests were being followed closely and covered by the international media. Indian news channels, newspapers and news websites were also covering the protests on a day-to-day basis. These protests did not just get media exposure, they had so much of it that there were allegations of protesters stopping, blocking and manhandling some TV crews because they had the option of choosing which journalists to allow and which to keep out.

On January 13, 2020, Arnab Goswami of Republic TV alleged that journalists from his channel had been ‘attacked in Jamia’ and that activists were not allowing them to cover the protest. The headline, ‘Republic Will Not Stop’, aptly captured the channel’s eagerness to report from anti-CAA protest sites. Goswami himself sat in front of the camera night after night and obsessed over the protest at Shaheen Bagh.

Deepak Chaurasia and Sudhir Chaudhary, both editors of channels which are often referred to as ‘godi-media’, did a joint ground-report from Shaheen Bagh where they tried to speak to the protesters but were shoo-ed away. They were so angry about being denied permission to cover the protest that they discussed and debated the issue endlessly on prime-time.

Considering the splash that anti-CAA protestors had already made in India and abroad, and the overwhelmingly “positive” coverage they were already receiving, it is hard to imagine why they would need to conspire to start a riot in order to generate media attention.

No shortage of worldwide criticism

The second argument on which the police has based its investigation is that anti-CAA protesters were trying to embarrass the government internationally with ‘false propaganda’ that minorities in India, especially Muslims, were being tortured/persecuted and denied equal rights.

This argument presumes that the government had not already been embarrassed on the issue of CAA and feared the prospect of international criticism. Now sample this.

Give the extent of these indictments, warnings and criticism by the international community of discriminatory treatment against Muslims could not embarrass the Narendra Modi government on the issue of CAA, why would the protestors have felt to the need to resort to the sort of conspiracy the Delhi Police chargesheet envisages in order to “embarrass” the government?

With this background, cui bono?

A third question that the Delhi Police chargesheet completely sidesteps is: Who stood to benefit from the riots?

The immediate effect of the Delhi riots was that all anti-CAA protest sites in North-East Delhi were packed up. Out of a total of 53 people whose bodies were recovered in the violence, at least 35, or two-thirds, were Muslims. The homes and businesses of thousands of Muslims were destroyed in the riots that were largely seen as anti-Muslim. The only places of worship which were attacked and desecrated – and there were several – were Muslim ones. The role of the Delhi Police also came under the scanner, as several riot survivors claimed that policemen stood around as mute spectators and in some instances even helped the mob.

Anti-government protest sites were targeted and dismantled in the riots and Muslims bore the brunt of the violence. Why would anti-CAA protesters do this? Why would they indulge in violence, when they were making headlines for peaceful protests? Given that it was precisely the Gandhian nature of their protest which had made headlines around the world, it was obvious that any sort of violence would have been counter-productive to their movement.  Did the riots benefit the anti-CAA protest and the civil society activists who were spearheading it, or did they provide an excuse to the government to crack down on the movement?