Even though the very first media reports of Donald Trump's visit came only on January 13, 2020, the police say Khalid hatched a plot on January 8 to use the US president's presence in India as an occasion to engineer violence. 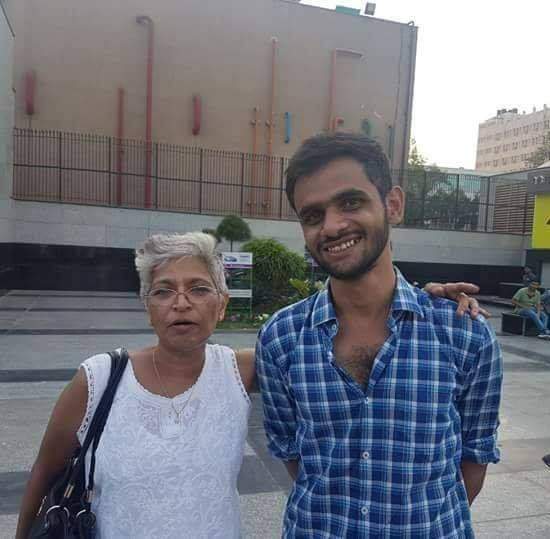 File photo of Umar Khalid (right) with Gauri Lankesh, the journalist who was assassinated on September 5, 2017. Credit: Facebook

New Delhi: The Delhi Police on Sunday night arrested political activist Umar Khalid under the Unlawful Activities (Prevention) Act on the charge of conspiring to engineer communal violence in Delhi during the visit to India of US President Donald Trump earlier this year. He has also been charged with sedition and 18 other sections of the Indian Penal Code, including murder and attempt to murder.

Though the police had claimed in various riots-related FIRs and charge sheets that Khalid was a key ‘conspirator’ and had summoned him for interrogation several times – including as recently as September 2 – they had not moved to arrest him. But around 11 pm on Sunday, he was formally taken into custody after being summoned to the police station for “interrogation” around 1 pm.

The communal violence which took place in the national capital from February 23 to 26, 2020 led to the death of 53 people, including one policeman. Forty of the 52 civilians killed were Muslim and an affidavit submitted by the police to the Delhi high court has recorded the disproportionate damage to property and places of worship suffered by Muslims in what was clearly targeted violence.

Despite the fact that Muslims bore the brunt of the violence, the police investigation claims the riots were the result of a conspiracy by Muslim activists and leaders and others involved in peaceful protests against the Citizenship (Amendment) Act at Shaheen Bagh and other parts of Delhi. The role of Bharatiya Janata Party leaders like Kapil Mishra, Anurag Thakur and Praveen Verma  in inciting and threatening violence against the protestors has so far gone uninvestigated.

Allegations against Umar Khalid, who has a PhD in history from Jawaharlal Nehru University, were first aired on social media by Bharatiya Janata Party activists when they circulated an edited clip of a speech he delivered in Amravati, Maharashtra on February 17.

Umar Khalid, already facing sedition charges, gave a speech in Amaravati on 17Feb, where he exhorted a largely Muslim audience to come out on streets in huge numbers when Trump arrives in India on 24th.

Was the violence in Delhi planned weeks in advance by the Tukde Tukde gang? pic.twitter.com/feUMwpPeKS

Union home minister Amit Shah quickly backed the allegation against Khalid and the civil society group United Against Hate. Shah told parliament, “United Against Hate – the name sounds so pious but look what they advocated. They said, ‘(Donald) Trump is about to come, we should block the streets’.”

However, the clip the BJP circulated contained only the last 40 seconds of Khalid’s speech with a clear intention to malign him. Even then, as the transcript of the extracted portion makes clear, there was no call for violence:

The Delhi Police went on to cite this speech as ‘evidence’ of Khalid’s intention to provoke violence but also claimed he took part in secret meetings with Tahir Hussein and Khalid Saifi – who were arrested in March and June, respectively – where the supposed plan to trigger violence was hatched.

Khalid’s name is mentioned in two separate charge sheets – 65/2020 and 101/2020 – as a participant in a meeting at Shaheen Bagh on January 8, 2020 where the conspiracy to use Trump’s visit to embarrass the Modi government first took shape. However, the police has not been able to explain how such a conspiracy could have been conceived that day when there had been no announcement of Trump’s visit either by the Indian or US governments or even any media speculation. The first media reports speculating about a possible Trump visit were published on January 13.

“I have not read the chargesheet,” Khalid told The Wire when details first emerged in June. “But going by what has appeared in the media, and in case it has reported the truth about the charges, I can only say that there is not even an iota of truth in this.”

Last week, The Wire reported Umar Khalid’s claim that the police was threatening acquaintances with arrest under the UAPA if they did not make statements implicating Khalid:

In a letter to police commissioner S.N. Shrivastava on September 1, Khalid cites details of what transpired during the “questioning” of an acquaintance by the Delhi Police Special Cell on August 29. As narrated by the acquaintance – whose name The Wire is withholding – police interrogators drew up a prepared statement about Khalid’s supposedly proposing a “chakka jaam in Delhi” at the “opportune moment” and asked the young man to sign it.

“When the acquaintance said he had no knowledge of these and other claims, he was threatened with himself being implicated in the violence and arrested under the Unlawful Activities (Prevention) Act – India’s draconian anti-terror law. The young man reluctantly agreed to sign the police statement. At this point, a senior officer added another line about Khalid promising to raise funds and the acquaintance was made to read the full “statement” in front of a video camera “in a natural way”.”

The identical language used in Narwal and Kalita’s  ‘disclosure statements’ – which a Delhi Police spokesperson insists were “truthfully recorded as narrated by the accused person” – suggests they were drafted by the police themselves, and the fact that the two students tried to write “refuse to sign’ on the sheets of paper they were given with their ‘statements’ casts further doubts on the police chargesheet.

If anything, these ‘disclosure statements’ lend credence to the charge Khalid levelled against the police in his letter to the police commissioner – that investigators were forcing his acquaintances to make incriminating statements in order to justify his eventual arrest.

In 2016, Khalid was charged with sedition along with former JNU Students’ Union president Kanhaiya Kumar. In 2018, he was targeted by a gunman who opened fire at him outside Constitution Club in Delhi.