Doctors say they have written several letters to the chief minister, lieutenant governor and prime minister, but to no avail. 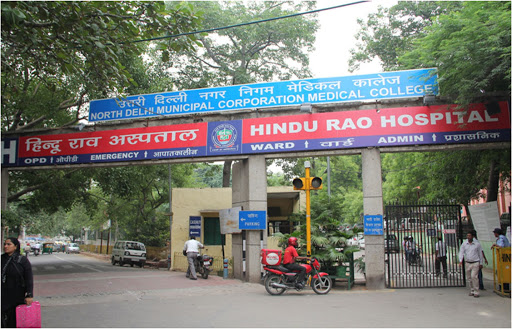 New Delhi: More than 350 resident doctors of two hospitals run by the North Delhi Municipal Corporation – Kasturba Hospital and Hindu Rao Hospital – have threatened to resign en masse citing non-payment of salaries for the past three-four months. They have given the authorities one week’s notice for meeting their demands.

Recently, news emerged that salary arrears for the past three months have not been credited to more than 3,000 health workers under the North MCD. Medical associations have written multiple letters to chief minister Arvind Kejriwal, Lieutenant Governor Anil Baijal as well as Prime Minister Narendra Modi but to no avail.

The Resident Doctors’ Association (RDA) of Daryaganj’s Kasturba Hospital, which has around 100 resident doctors, issued a letter to the hospital administration on June 10 stating that unless their salaries, due for over three months, are disbursed by June 16 and they are ensured a regular salary payout in the future, they will be forced to resign.

“We are not being paid salaries, making us unable to pay our house rent, huge travelling expenses and to buy essential commodities. We cannot work without money. As frontline workers, we should be paid the pending salary as soon as possible and should be ensured a regular salary payout,” the RDA wrote in the letter to the hospital’s additional medical superintendent.

“None of the senior or junior resident doctors in our hospital have been credited salaries over the last three months,” said Dr Sunil Kumar, president of Kasturba Hospital’s RDA. “Earlier, we had planned to call a strike. But as we are in the middle of a pandemic, it would be inhuman to do so. We decided to hand over mass resignation.”

“Doctors, health workers, policemen and bank officials are being hailed as ‘corona warriors’. They are being applauded and honoured,” he adds. “Respect is good but can we buy ration with it? I do not want to politicise the issue. I do a job and I want to be paid for it. Any work with no pay is like slavery. I want the masses, the government, the judiciary and the human rights commission to take cognizance.” 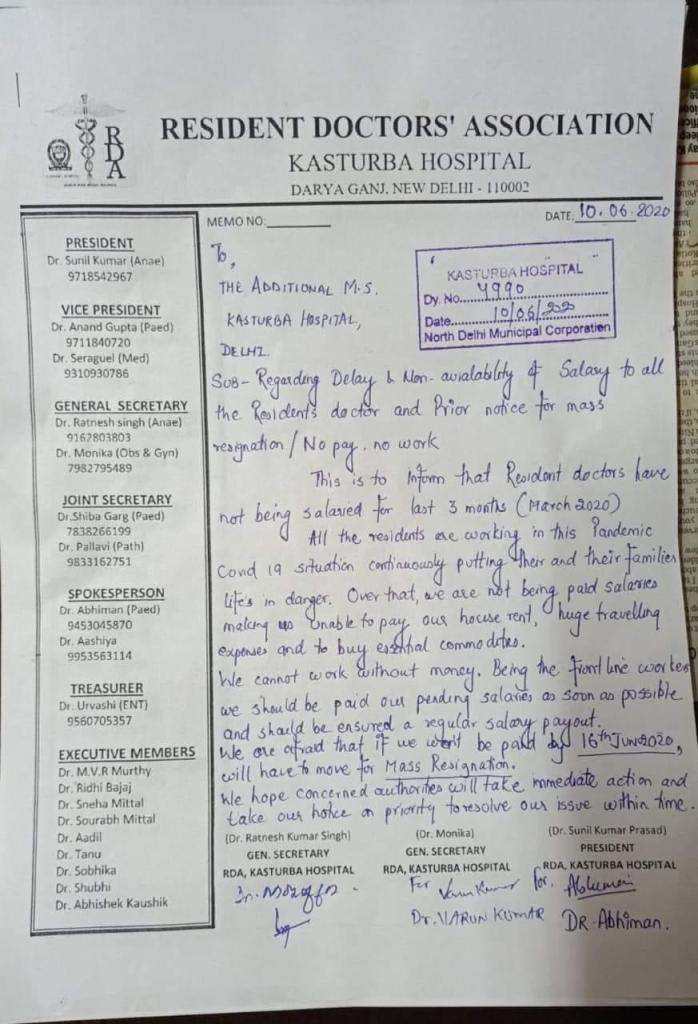 Speaking to The Wire, Dr Abhiman Chauhan, who has been a resident at the Kasturba hospital for five years, says, “Most of the resident doctors are not locals. They live in rented apartments. They have to pay the rent and bear travel expenses. Earlier, many of us used to take the metro but now we have to book cabs or taxis. If salaries are not paid for three months, how will we fulfil our personal responsibilities? If there is a family to provide for, things get even more difficult. Keeping all this in mind, we have threatened to resign collectively.”

“Doctors working in hospitals run by the Delhi government are being paid salaries but those employed by the hospitals in North MCD are not,” he claims. “The hospital administration says that they do not have funds. They even stated the possibility of non-payment of salaries for the next two or three months. We can’t tolerate it for so long.”

Even senior doctors haven’t been paid

However, it is not only resident doctors facing the issue of non-payment of salaries, as even senior doctors under the North MCD have not been paid for the past three months.

Dr Alok Pradhan, senior medical practitioner and former additional medical superintendent of Kasturba Hospital, told The Wire, “No doctor in our hospital has been paid salaries for the past three months. Letters have been written to the mayor, the CM, the LG and even the PM. It is all because of the tussle between the MCD and the Delhi government.”

“Working on meagre salaries of Rs 17,000-Rs 18,000, how long can they continue without pay?” he says about the problems faced by resident doctors. “We raise our own issues but we have been employed for 30-40 years and have savings as well. But they are just out of college.”

Similarly, the RDA of Hindu Rao hospital wrote a letter to the hospital administration on June 10, demanding that salaries due for four months be disbursed by June 18 and that regular payment of monthly salaries of health workers should be ensured.

In the letter addressed to the additional superintendent of the hospital, the RDA wrote, “We would like to inform you that with every passing day, it’s getting very hard and tedious to get through the daily expenses of a lot of doctors. Even it’s getting cumbersome to commute to work and earn the basic livelihood. We have been mentioning it as a key point in every letter but we feel our voices are unheard rather they are dismissed with acrimony and irrational reason.”

“We request you to release our pending salaries till June 18, 2020, and ensure a monthly disbursement of salaries to all the HCW henceforth. We are helpless to inform you that residents are choosing ‘No work, no pay’ rule in order to mark their agitation and if the issues persist we might have to take uncalled decisions in the form of mass resignations,” the letter adds.

Dr Abhimanyu Sardana, president of Hindu Rao hospital’s RDA, told The Wire, “Our salaries are usually delayed by a month or two. We were able to manage somehow, but it is getting difficult now. It’s been 106 days since we were paid.”

“My father is a businessman but he is not working these days,” says Sardana. “I am the only earning member of the family. If I don’t get my salary for such a long period, how will the family meet daily expenses? At present, there are more than 250 resident doctors like me here.” 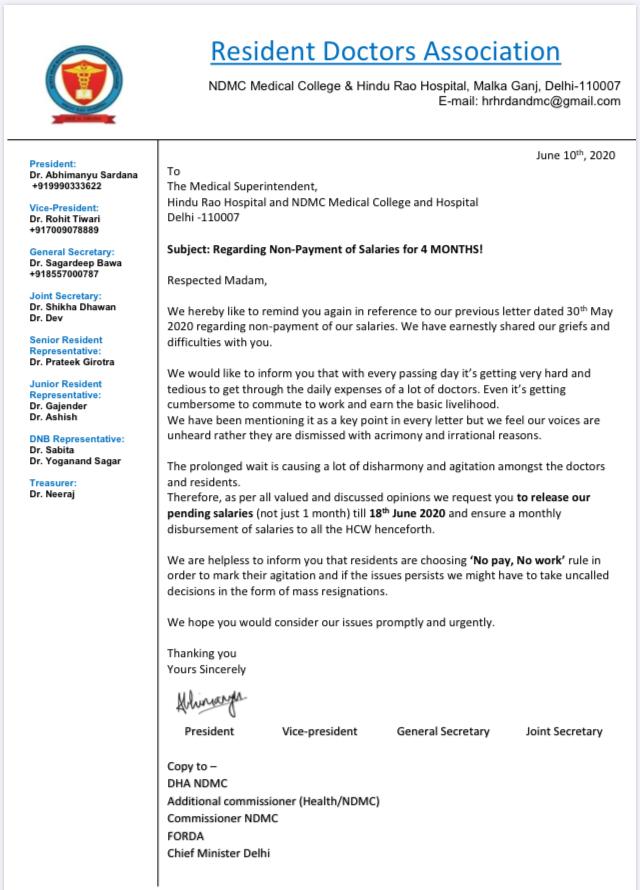 Although it is only the resident doctors protesting here at Hindu Rao hospital, like the Kasturba hospital, salaries of senior doctors are pending here as well.

“Senior doctors are also not receiving their salaries,” says Sardana. “Even though their salaries are credited a month ahead of our salaries.”

“We have been raising the issue with the hospital administration repeatedly,” adds Sardana. “We have written multiple letters since March. Last week we had written a letter regarding salaries, but no response has been received yet. We have registered our protest in several ways including black ribbon protest. We are left with no choice now. The administration has even asked us to quit.”

Regarding coronavirus patients and the facilities provided by the Hindu Rao hospital, Sardana says, “There are rumours that they are preparing to turn it into a designated COVID-19 hospital too. But till now proper treatment facilities for COVID-19 have not been made available to us. The personal protective equipment (PPE) kits are of poor quality. We do not have access to sufficient N-95 masks. In hospitals run by the Delhi government, two N-95 masks are provided every week while we have only been provided 4 masks since the outbreak of the pandemic,” he said.

The doctor said that even in the 15-16 polyclinics that are run by the Municipal Corporation of Delhi are pending there for three months or more.

A doctor at a polyclinic in Tri Nagar says on condition of anonymity, “We have also not received our salaries for the past three months. Our arrears have been due for a long time. Arrears of the 7th pay commission are also due for some of us, while those of others are due since 2014 or even 2011.”

“MCD has a lot of issues regarding funds,” she adds. “Only a limited number of masks is available. We carry our own masks. We don’t have access to N-95 masks.”

Commenting on the problems faced by resident doctors, she says, “Resident doctors have a post-graduate degree. They have to start their families. They have loan instalments and their children’s fees to pay. They are ready to borrow further loans to pay those instalments. But now the condition is such that they will have to resign. The private sector may not pay them much, but at least they will have a source of income.”

“There’s also the issue of leaves,” she further adds. “We have not been given a day off since March. Our Earned Leaves (ELs) expire in June but we are not allowed to avail them either.”

“Our salaries of four months are pending,” says Dr Shikha Dhawan, another resident at the Hindu Rao hospital for the past two years. “How is it possible for a normal person to work under such conditions during these stressful times?”

Dr Maruti Sinha, secretary of MCD Doctors Association, also says doctors are facing problems. “We wrote a letter to the prime minister three months ago. We had threatened to give mass resignation if our salaries were not disbursed, following which salaries for one month were credited to our accounts. We have received pay for the month of February while the payment is still pending for March, April and May.”

“After a meeting held on Wednesday, the RDA decided that they will no longer work under such conditions,” she says. “The problem is that there is no wholesome solution for it. They went to the medical superintendent as well but were told there are no funds.”

Dr Sinha says, “We tell them that if they are unable to manage, they should hand it to the Delhi government. Health is a state issue anyway. MCD falls under the home ministry and Delhi Development Authority (DDA). So it is under the Centre. We have been protesting for salaries since 2015, but we haven’t yet started getting paid on time.”

Taking a cue from the RDA, the doctors’ association is also speculating strict measures for demanding salaries.

In this regard, a statement was released by Delhi Medical Association (DMA), expressing deep concern about the issue of non-payment of salaries. In the statement, DMA president, Dr Girish Tyagi, said a letter has been written to Union home minister Amit Shah and sought an appointment to discuss the matter.

In the letter, the DMA has urged Shah to intervene in the matter so that the resident doctors receive their full salaries of three months as also any past arrears soon.

Speaking to The Wire, North MCD mayor Avtar Singh said, “Due to lockdown, we have been unable to collect taxes, like house tax, for the past two or three months. The Delhi government is also not releasing funds for disbursing salaries which is why we are unable to credit salaries. We are trying to help them as soon as possible.”

The Wire contacted Dilip Pandey, a member and spokesperson of Delhi’s ruling Aam Aadmi Party, but no response was received.