In a statement, the Delhi police said they used “water cannon and absolutely minimum force to push” protestors at Daryaganj.

A policeman detains an injured protester during a rally against the Citizenship Amendment Act at Delhi Gate, December 20, 2019. Photo: PTI

New Delhi: The protests against the amended citizenship law continued unabated at many places in Delhi after Friday prayers despite police restrictions. By evening, reports poured in of police using water cannons on protestors at Delhi Gate after a car was set on fire.

Bhim Army chief Chandrashekhar Azad also led a massive protest at the Jama Masjid in Delhi, and was detained before he managed to escape.

Six people were brought to Sabharwal hospital with head injuries and fractures and were given first aid, Dr. Amit Mishra of Sabharwal Hospital told The Wire. All have been referred to Lok Nayak Jai Prakash Narayan Hospital (LNJP). Sources say around 20 more who were injured in the violence near Delhi Gate are at LNJP.

In a statement, the Delhi police said they used “water cannon and absolutely minimum force to push” protestors at Daryaganj. “The police staff immediately doused the fire. Some police personnel including] senior officers were injured in stone-pelting. Around 40 persons have been detained.”

Delhi Police: In the evening, suddenly some anti-social elements in the gathering started breaking the barricades and indulged in stone-pelting in a bid to march towards Jantar Mantar against the police advice. Police used water cannon&absolutely minimum force to push them back.

A total of 58 companies of security force personnel were brought in from outside to bolster the strength of local police, PTI reported. 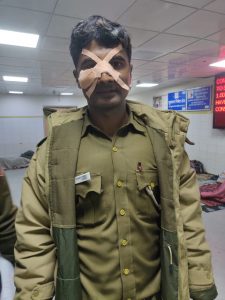 Medical Superintendent of LNJP, Kishore Singh, told ANI that 36 injured protestors are at the hospital for treatment. “One protestor got his leg injured, would be shifted in ward,” he added. Around seven-eight injured policemen were also brought to LNJP.

Even though the police is remains tight-lipped, a source told The Wire that 32 people have been detained at the Daryaganj police station. The police has not released a list of the names yet.

A Supreme Court lawyer also told The Wire that they are not being allowed to reach the area to offer aid to affected protestors.

According to PTI, the Rapid Action Force (RAF) is now conducting a flag march in the area.

Sahiba, a student from Max Mueller Bhavan, who was at the protest, told The Wire: “Today was my first day of protesting, I wanted to raise my voice against what’s going on. Everything was normal in the afternoon while we were moving towards Delhi Gate, I saw the namaz happen peacefully.”

“I was with two other girls and we thought we that before heading to India Gate, we would stay in the area for a bit. While walking some time later, we saw some people running and they said the police was using water cannons. Suddenly, the police started a lathi charge and many people fell on a divider that was there. The police, instead of hitting people’s arms and legs, was hitting them on their heads. Woh sar phod rahe the. I managed to take some photos before some women constables pulled me to a side,” she said.

A crowd has also started to build at the former Delhi police headquarters at ITO for a silent dharna. The protestors are demanding that the more than 40 people who were detained this evening be released. 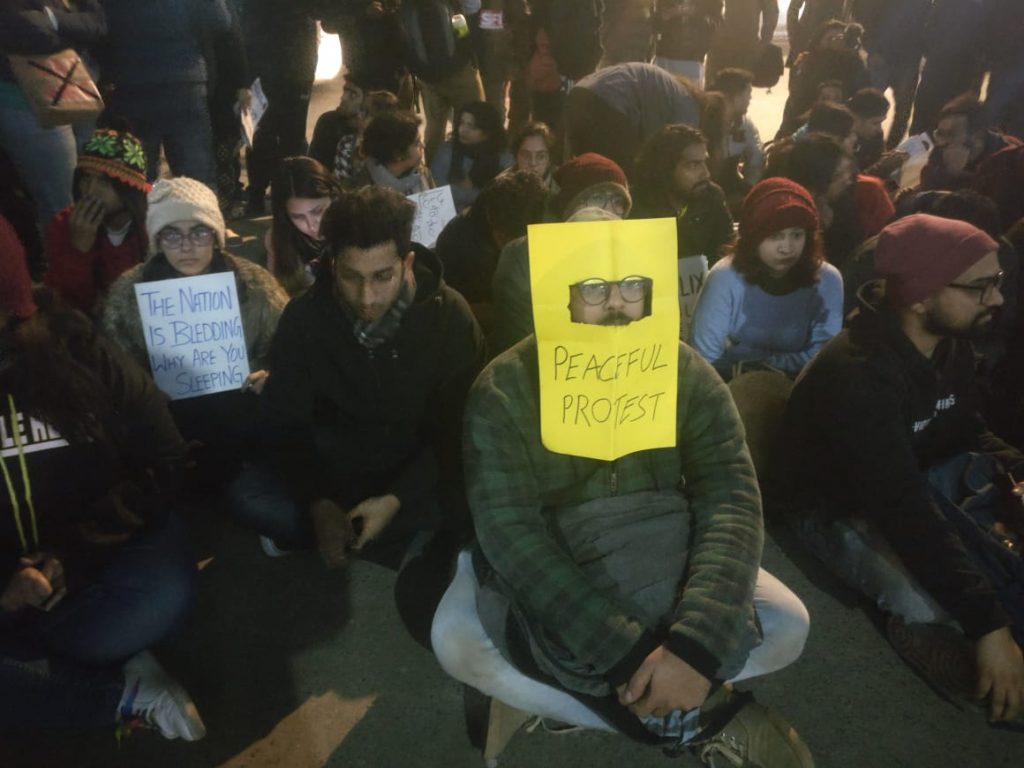 The crowd that has gathered to demand the release of those detained in today’s protest. Photo: The Wire

Students protesting at the former police headquarters told The Wire that there are several severely injured students at Daryaganj police station who have not been allowed any medical attention.

According to a journalist in Daryaganj, 32 adults have been detained at the police station.

Eight minors have also reportedly been detained at Daryaganj police station. Kishore Singh, doctor at AIIMS, has said that the “minors had minor bruises and they have been given first aid”. The detained minors will be released to their parents only, the police has said.

In updates from Daryaganj at around 10:30 pm, one woman lawyer – Tara Narula – was finally allowed to go inside to meet those who have been detained. No major injuries have been reported and a medical team is inside the police station, she said.

Delhi Police PRO Mandeep Singh Randhawa told PTI, “We used mild force and water cannon but did not use tear gas and lathicharge.”

“We have detained many and their role will be probed. Several police personnel have been injured in the violence. Our Joint CP has also been injured by stone pelting. The crowd had come from outside,” he said.

Many among those who were detained were heard pleading that they were protestors, but not involved in the violence, and had merely been caught in its cross hairs. 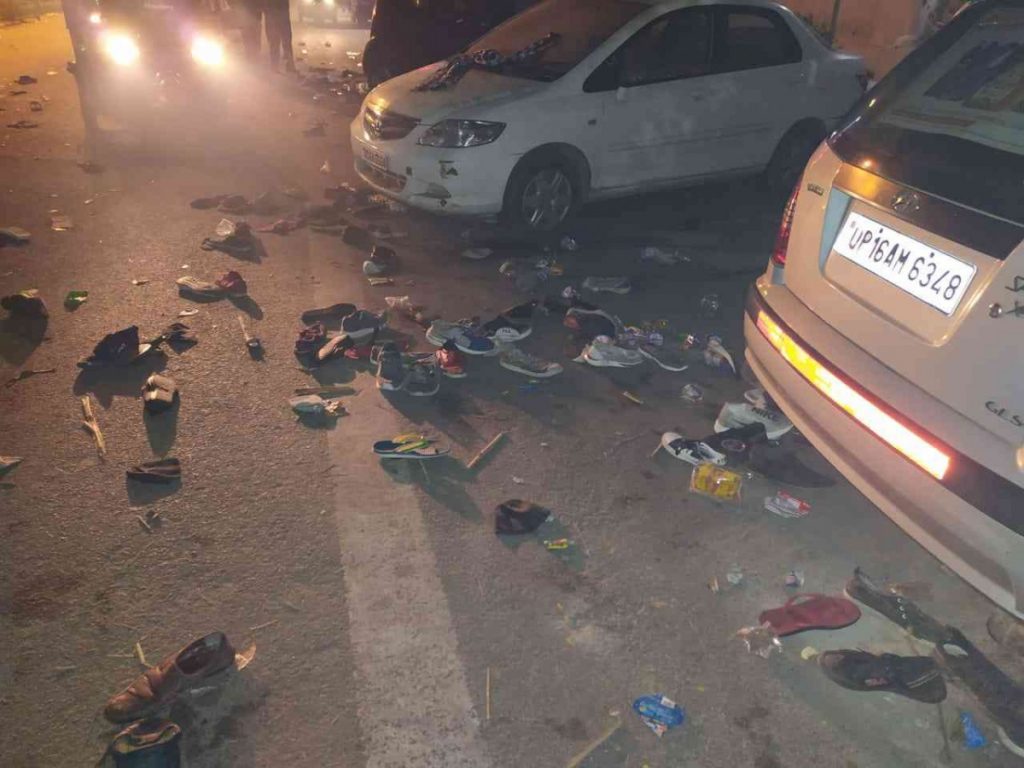 Later in the evening, the Ministry of Information and Broadcasting has issued advisory to all television channels to desist from broadcasting content that could incite violence and cause law and order problems. The advisory also extends to the broadcast of any content that “promotes anti-national attitudes and/or contains anything affecting the integrity of the nation”.

The I&B Ministry has issued an advisory to all TV Channels that they abstain from showing any content which is likely to instigate violence. #CitizenshipAmendmentAct pic.twitter.com/poir7aiQKq

Scores of people also gathered at the India Gate to voice their dissent against the new citizenship law and the NRC. Raising slogans of ‘Azaadi’, ‘No NRC, No CAA’, the protesters, most of them college students, demanded that the new law be repealed.

“On December 15, police barged into the university and used tear gas. I was in the washroom of the new reading hall. Around 30-40 police personnel attacked two students. During that incident, I sustained a head injury and the irony is that the police have filed a case of culpable homicide against me. Police have destroyed the library of the university,” said Chandan Kumar, a Jamia Millia Islamia student.

“My family came to India from Bangladesh after 1971. In this Bill, the government said they will give citizenship to those who are religiously persecuted, including Hindu and Sikh, in three countries. You are saying that they are the minorities in those countries. If this is the criteria, then will you accept the Indian Muslims in Sri Lanka or Rohingya Muslims in Myanmar. We are not opposing this just because it is anti-Muslim, but it is anti-human too,” said Raju Sarkar, a student of Jamia. 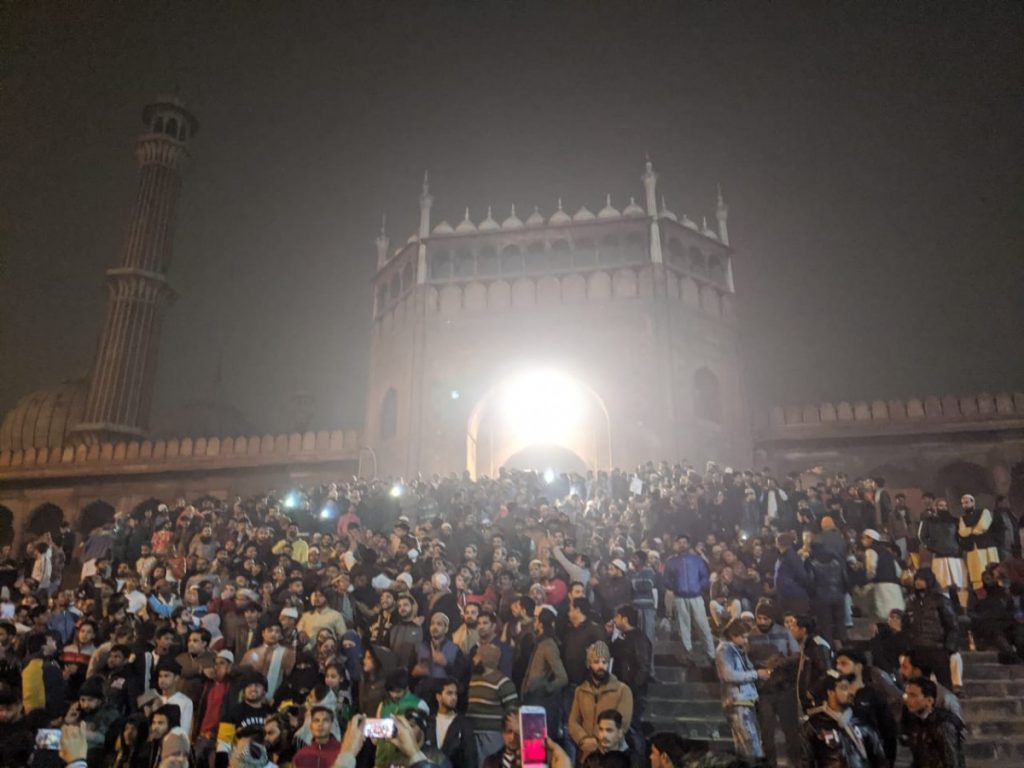 In this photo taken at 11:30 pm, sloganeering protesters can be seen on the stairs of Jama Masjid. Photo: The Wire

“Everyone should oppose this Act because its intention is wrong. If you want to give citizenship to a person who is harassed or in trouble, then do not ask them about their religion and country from where they have come. Detention camp in any country means the end of the democracy,” said Khurshid.