The Delhi government’s efforts to expand food security benefits offer a unique vantage point to understand issues in universalising access to food and arriving at solutions that will regain the trust of the urban poor and migrants.

Migrant workers and homeless people queue to receive free food during a nationwide lockdown to slow the spread of the coronavirus disease (COVID-19), in Ahmedabad, India, May 1, 2020. Photo: Reuters/Amit Dave

Delhi is under lockdown, as are many other cities and towns ravaged by COVID-19.

This lockdown has disproportionately affected the livelihoods of migrants; more than 8 lakh of whom reportedly left the city in an act of distress between mid-April and mid-May 2021. While the focus of this brutal second wave remained on the severe paucity of medical infrastructure, another crucial aspect – food relief to underserved populations, that was a key policy concern last year – has only recently garnered some attention with the ongoing hunger crisis.

At the beginning of May this year, the chief minister of Delhi announced that ration card holders in the city will get free foodgrain for two months to mitigate economic problems that the poor and daily wage earners were facing on account of the lockdown. While this offered relief to the city’s 72 lakh ration card holders, a misreading of the message led to many, without ration cards, attempting to seek assistance; and to disappointment when they realised that the promised relief was out of reach.

Considering that the Delhi government had successfully executed a large-scale food support for non-ration card holders in 2020, such reactions to the announcement reflect sheer desperation when lockdowns hit livelihoods, resulting in food shortages. On May 25, 2021, when the disease situation had largely stabilised, the Delhi government issued guidelines for a scheme to offer foodgrains’ support initially to 200,000 (2 lakh) people without ration cards. This is said to be extendable later to a maximum of 20 lakh based on the “demand and need assessment from the field”.

While this initial number of 2 lakh is intriguing considering that the Delhi government provided non-PDS (public distribution system) food relief to over 30 lakh unique beneficiaries last year, as per data available from the Food & Civil Supplies Department website, the current scheme differs from last year on another significant point.

It is a “one-time relief measure”, in comparison to last year’s relief measure that continued for around three months. Keeping in view the long-term effects of the pandemic and lockdown, a more sustained food security intervention to cover those who are currently left out of the PDS is necessary.

With this background, it is worthwhile to look at how Delhi, a city of more than 200 lakhs, widened its food security net under the 2020 lockdown? What lessons are in sight for administrators to serve the scores of migrants, daily wage earners and others whose sources of livelihood have dried up once again? How can the government’s vision that aims: “to ensure the welfare of daily wagers and migrants staying in Delhi” in the backdrop of a recent Delhi Disaster Management Authority order be fulfilled? Can good practices be efficiently implemented to set up a sustainable safety net against ongoing hunger challenges, rather than ad-hoc arrangements of relief at the onset of each wave of pandemic surges? 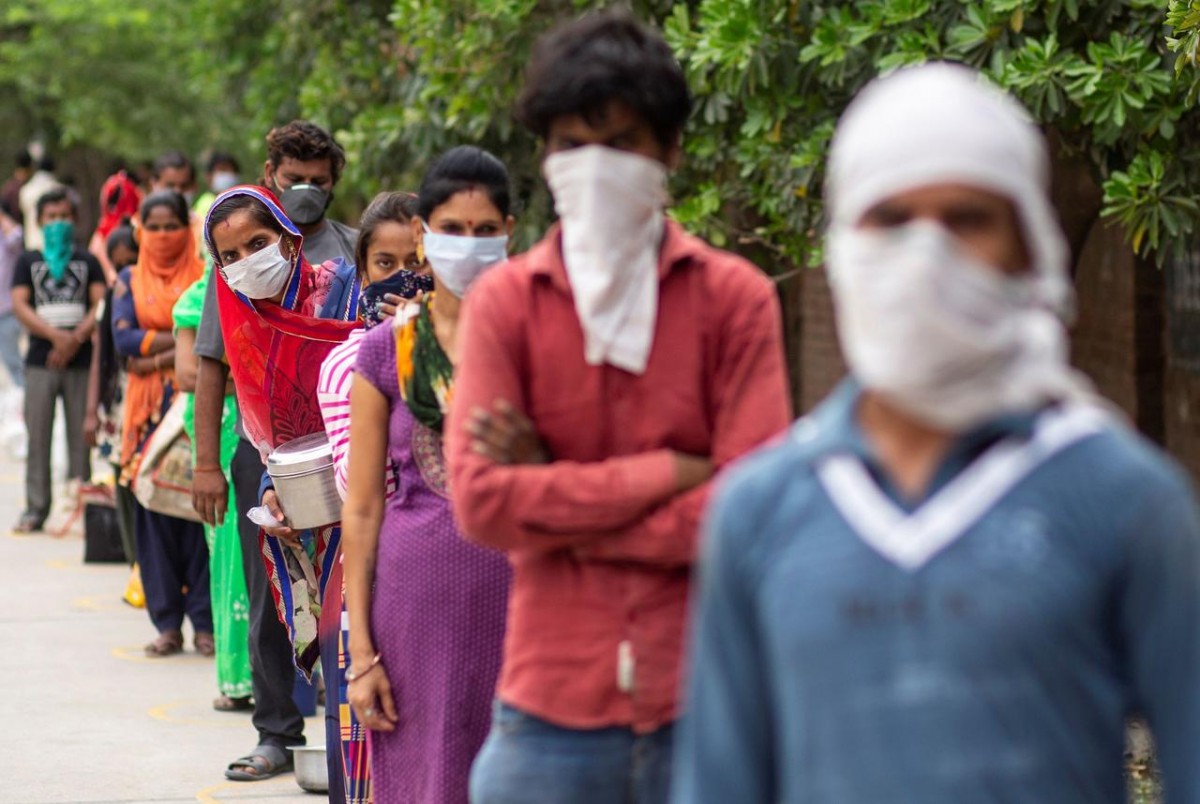 People wait to receive free food at an industrial area, during an extended nationwide lockdown to slow the spreading of the coronavirus disease (COVID-19) in New Delhi, India, April 23, 2020. Photo: Reuters/Danish Siddiqui

While nearly 2000 Hunger Relief Centres where cooked meals were distributed sprung up last year, these are less conspicuous this time with just about 200-odd centres operating currently. During the 2020 lockdown, the city’s 7.20 lakh ration card holders were to receive their regular PDS foodgrain allocation for free; alongside an additional allocation under the Pradhan Mantri Garib Kalyan Anna Yojana (PMGKAY) free of cost.

Both these government initiatives are being implemented again during the current lockdown. Further, the Delhi government had sought to provide temporary ration support to around 30 lakh people outside the PDS net through e-coupons last year; however, while guidelines for a similar scheme have been announced, as mentioned above, its scope appears limited, and it has not yet been operationalised.

The 2020 experience offers lessons that underscore the huge potential of outreach when the state machinery is cranked up, while overcoming challenges in the form of unequal supplies to demands at relief centres, and hold-ups in the disbursement of e-coupons compounded by technical snags.

Essentially, there are three challenges in dealing with issues around food security and related welfare measures reaching the intended beneficiaries. Given the challenges of governing a metropolis like Delhi, the first issue is that of how to ensure portability of benefits; second, streamlining of facilities providing cooked food during the lockdown period; and the third, optimum interaction between various departments for efficacious last-mile delivery.

In the first case, the city administrators have quite a task at hand in ensuring that the benefits accruing under food security measures would reach even those who did not have any documentation proof of a residential address in Delhi. The challenge arises in the form of an inability to serve migrants who are typically registered for PDS benefits in their states of origin, and those who might have moved locations within the city either voluntarily or on account of forced relocations. Additionally, outdated datasets determining the eligibility of beneficiaries to be included under PDS can cause further exclusions. Moreover, if a person or household’s category of allocation (i.e, Antyodaya Anna Yojana or priority households) is also decided using old datasets, there are chances of incorrect categorisation and continuing food insecurity.

During the previous lockdown, the Delhi government addressed this through a temporary ration system through e-coupons, which required a single identity proof – the Aadhaar card – that did not need to have a Delhi address. With this minimum requirement backed by technology-enabled solutions and political will, the benefit under the scheme could reach a vast majority of the underserved.

A spin-off feature of this scheme was that the government relied on potential beneficiaries self-selecting into the scheme as against the existing mechanism under the targeted Public Distribution System (PDS). As for the cooked meals at Hunger Relief Centres (HRCs), there was no documentation requirement at all; subject to availability of food, anyone who queued up for the cooked food could access it.

Secondly, publicly available data revealed that during the 2020 lockdown and initial part of unlock phases, a daily average of around 3.6 lakh cooked daytime meals were distributed through the HRCs. At its highest single-day capacity, an impressive distribution of nearly 9.2 lakh cooked meals during the daytime of May 3, 2020, was organised. A district-wise analysis further shows that in Delhi’s districts where the level of impoverished population was high (such as in North-West, North-East and South-West), the delivery of cooked meals too was higher.

Also read: Out of Work, Poor Not Getting Rations, Information on Schemes: Food Rights Activists

Under the current lockdown, the Delhi government can consider prioritising available resources in a spatially targeted manner, using updated data to assess the demand for cooked food across districts. At the same time, there is a need to step-up supply and distribution of cooked food in districts (such as North-West and West) where the demand was more in relation to the population not covered under PDS. 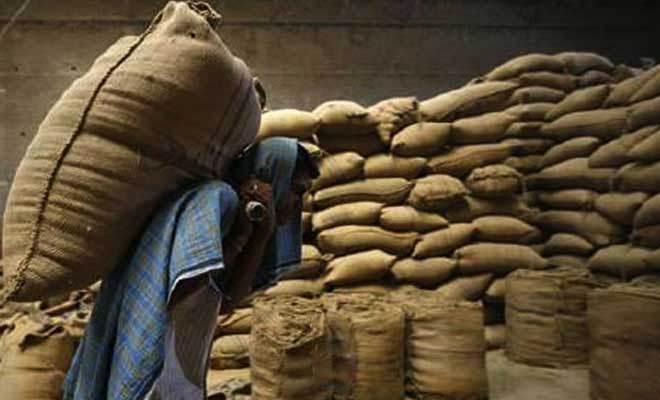 Third, the Delhi government’s food relief efforts during the 2020 lockdown demonstrate a high degree of convergence among different departments and redeployment of available physical infrastructure. For instance, if the Department of Food and Civil Supplies oversaw the distribution of cooked food, the centres were run in schools under the Department of Education or in night shelters operated by the Delhi Urban Shelter Improvement Board. Integrated and dynamic data-sharing across departments is key to addressing food security challenges, alongside coordination among public and private agencies, and civil society organisations.

The Delhi government’s efforts to expand food security benefits offer a unique vantage point to understand issues in universalising access to food. Notwithstanding recent changes in Delhi’s governance model, challenges would remain in the form of multiple administrative controls between the Centre, the State and urban local bodies. Policymakers could lean on lessons from Delhi’s 2020 efforts to widen the food security net to arrive at solutions that will regain the trust of the urban poor and migrants in the city’s governance systems.

Eesha Kunduri is a PhD student at University of Minnesota, Twin Cities; Shamindra Nath Roy is a Senior Researcher at the Centre for Policy Research, New Delhi; and Shahana Sheikh is a PhD candidate at Yale University. The authors gratefully acknowledge comments from Partha Mukhopadhyay and K.V. Prasad. Views expressed are the authors’ own.