The Dehradun Disability Forum, an alliance of over 20 disability rights organisations in Dehradun, has issued a public statement regarding calling the incident illegal and morally wrong.

In what is being seen as blatant discrimination, 17 adults with autism were harassed and humiliated at Varada Tennis and Swimming Academy, a private swimming pool in Dehradun. The adults, all residents of Arunima – a residential centre for people with autism – had each paid the full monthly fee of Rs 2,000 and were enjoying a daily escape from the blazing heat of a particularly hot summer.

After alleged complaints from other pool users, management demanded that the group come at a different time, that many of them should have personal escorts and that some of the adults would only be allowed access to the kiddie pool along with other arbitrary requirements.

The Arunima staff cooperated with each demand and made repeated visits to the pool owner to address his concerns and fears. “I really think we have supported him,” said Aparna Das, founder and director of Arunima.

“I spent about an hour talking with him, sent him articles, wrote a letter accepting full responsibility should there be any ‘mishap’, agreed to a reasonable time change, even offered to change it again to an earlier time… and finally, after our last conversation, suggested we do a joint interview for some newspaper after this swimming season was over.”

But the situation continued to deteriorate. The management claimed, for example, that, since some of the individuals have epilepsy, if any of them had a seizure while in the water, non-disabled swimmers might also have seizures.

“This level of ignorance is difficult to address with reason and logic,” Das said.

Finally, on May 24, the owner asked for yet another time change, saying he couldn’t continue to do “charity” (the group was paying full fees) and that many club members were saying they didn’t want to be in the same pool as the Arunima group. At that point, unable to adjust their schedule to the new, inconvenient time, the group withdrew from the pool.

Pool Discrimination is nothing new. Indians were long refused entry to elite swimming clubs such as Mumbai’s Breach Candy. During the 60s as part of the Civil Rights struggle in the US, black people, along with white supporters, held “swim-ins” in public and private pools in an attempt at integration. 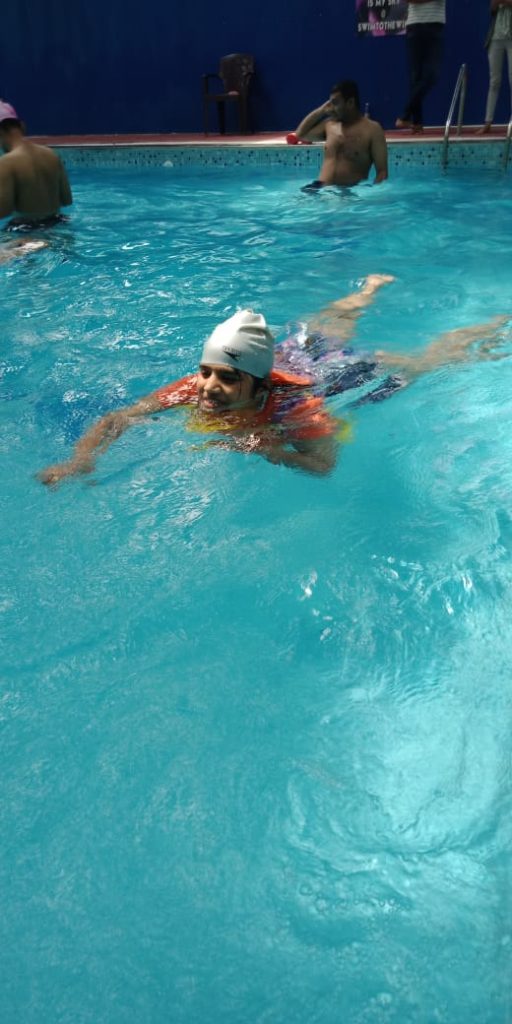 Pool officials demanded that they provide medical certificates proving that they were disease-free, turned a blind eye when they were attacked physically by angry mobs, and, in one particularly horrific incident, poured acid in the pool in which protestors were swimming.

The acid incident, which was widely photographed, galvanised the nation. President Lyndon Johnson immediately established a civil rights commission and within weeks, the Civil Rights Act of 1964 was passed into law.

The Dehradun Disability Forum, an alliance of over 20 disability rights organisations in Dehradun, issued this public statement regarding the incident:

“Discrimination on the basis of disability is illegal, morally wrong and destroys the very basis of what our country stands for. We believe in an India where every person is equal and enjoys the same rights as anyone else.”

A petition created to protest the pool owner’s actions quickly gathered over 1000 signatures.

Five minutes after I (also a DDF member) tweeted the story, I got a call from Arman Ali, Director of the National Centre for the Promotion of Employment of Disabled People, telling me about his successful suit against Gold’s Gym in Guwahati which had discriminated against him and others with disabilities.

The court ruled in his favour and in addition to ordering training on the Rights of Persons with Disabilities Act 2016 for all government officials, also directed the enactment of awareness and sensitisation programs throughout the state. The Court further orderd that both the Government of Assam and Gold’s Gym pay a combined total of Rs one lakh as compensation to Shishu Sarothi, the Guwahati organisation Arman headed at that time.

Also read: What India Needs to Learn About Disability Rights

Ali, who is himself a wheelchair user and a force to be reckoned with, told me by email: “This is the first time the private sector has been held accountable in India which goes to show that nobody is above the law. This could help create a paradigm for the movement across India. It’s of prime importance to make the private sector accountable as most of the services we use – be it aviation to tourism – are run or managed by private sector companies. It’s within reach; we must remain steadfast in our approach.”

In a front-page article in the Times of India, the owner gave a different version of the story in which he was fully cooperative and Arunima was the unreasonable one, but the facts and documentation prove otherwise.

The Dehradun Disability Forum has drafted a letter of intent which will be sent to the owner of the swimming academy, following which Arunima intends to file a formal suit for discrimination and violation of the Rights of Persons with Disabilities Act, 2016.