Over a dozen Delhi Police personnel tried to “dissuade” a group of residents from holding a discussion on the Act at the behest of the colony's welfare association president. 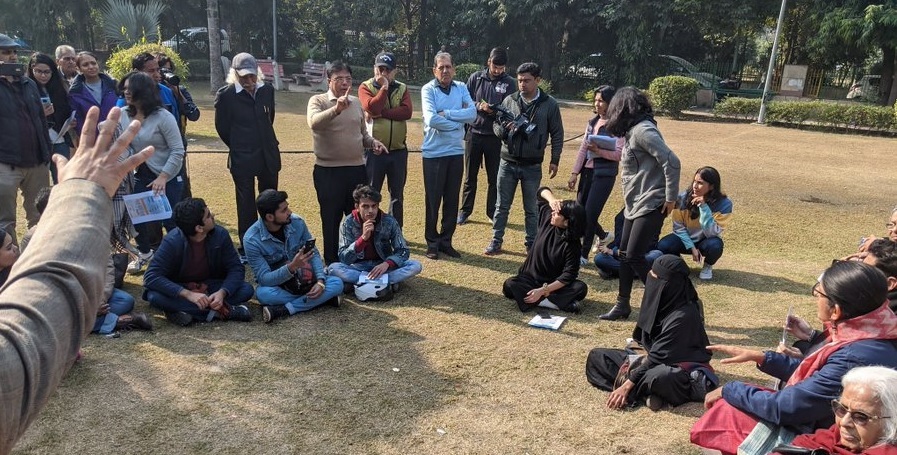 A scene from the discussion. Photo: Niha Masih/Twitter

New Delhi: On Sunday, January 5, a scene that unfolded at one of the capital’s posh residential colonies  presented a disturbing snapshot of the shrinking space for public dissent and debate in the world’s largest democracy.

Some residents of South Delhi’s Defence Colony planned to host a bunch of young people for a conversation on the recent amendment to the Citizenship Act at the Durga Puja Park in A block on the morning of January 5. Several residents, included a few senior citizens, came out to hear them.

According to eyewitness accounts, over a dozen Delhi Police personnel arrived at the spot to “dissuade them” from holding the conversation at the behest of the Defence Colony Residents’ Welfare Association (DCRWA) president Ranjit Singh.

They said Singh, along with two other members of the executive committee, stood with the police and asked those assembled to disperse.

A Twitter thread by Washington Post‘s India correspondent Niha Masih, who was at the venue to cover the discussion, mentions the welfare association’s president as saying, “In this colony, we don’t like such type of things.”

“Residents asked what stopped people from coming into their own park to talk. A female lawyer explaining the law was heckled by a gentleman who said, ‘Don’t talk about Assam. This is Delhi’. She said, ‘Assam is also part of India’. As the arguments got heated, some of the girls began to sing the national anthem. The gentleman continued to speak above that,” she tweeted.

In the colony’s Facebook group, resident Rajeev Suri related, “A civilised discourse planned this morning @ 11 am by ordinary citizens, students on the Citizenship Amendment Act; I walked in to see a posse of police all geared to face a riot…but the voice and the spirit of the people prevailed, even the most vociferous calmed down, but the terrible anti-national conduct of DCRWA cannot be condoned, turning the police on the people.”

He said, “The meeting was interspersed with singing the national anthem, and finished with reading the preamble of the Constitution.”

When The Wire contacted Suri, he said, “I have also pointed out that the RWA president must take responsibility for what he did. Importantly, it was beyond his mandate. He and his team was chosen to do welfare work for the colony residents, not to call the police to stop a peaceful assembly of people.”

He said, “When I pointed out that these are educated young people only wanting to talk to us, I was surprised to hear him say that they are outsiders and the event could develop into a law and order situation. He said they should go to Jantar Mantar.”

Another resident, Bhavreen Kandhari, told The Wire that, “It is a public park so anyone from outside can also come there. Also, there were 3-4 people who were not residents of Defence Colony but came to disrupt the conversation, shouting slogans. We are not questioning why they were allowed to be there.”

Masih’s thread added, “A second disrupter arrived shouting ‘Jhoot ki dukan band karo’ (close the shop that sells lies.) But people asked him to point out the lie, he began to shout louder. Resident read the preamble of the Constitution.”

A second disrupter arrived shouting “Jhoot ki dukan band karo” but when people asked him to point out the lie, he began to shout louder. Resident read the Preamble of the Constitution. pic.twitter.com/DTDU4QN6YV

Kandhari said, “These students are part of the anti-CAA protests in Delhi. They have been visiting all the posh colonies of Delhi, talking to residents about some facts relating to the Act. People have come out to hear them because they want to take an informed decision on the issue. It is shameful that the RWA of a posh colony like us welcomed the students by calling the police with rifles.”

The residents said the police didn’t force those assembled to disperse but videographed the entire event, focusing on the “faces” of those joining the conversation and later took away all the posters and the mic. Khandari added, “This only underlines that the space for public debate is increasingly shrinking.”