After a tea plantation worker died at a hospital, a violent mob attacked the premises. Deben Dutta was attacked and was prevented from getting medical aid. Guwahati: A 73-year-old doctor serving as a medical officer at the Teok Garden in upper Assam’s Jorhat district was lynched on Saturday evening. A mob accused the hospital Deben Dutta was working in of negligence resulting in the death of a plantation worker. A 74-second video depicts the brutal nature of the assault.

Dutta, the senior medical officer at the hospital, was away at his quarters when 32-year-old Sukra Majhi, a tea labourer, was brought to the Teok Tea Garden Hospital around late noon on Saturday. He was apparently seriously injured in an accident. Majhi hailed from line no 12 (a system established by the British that lines the residences of tea labourers in specific quarters) of the estate. He was first taken to the First Referral Unit in Teok and then brought to the garden hospital. It was here that he died, at around 4:45 pm.

After Majhi was pronounced dead, bedlam erupted at the hospital. Relatives, labourers, suspected outsiders and acquaintances of Majhi began to assault the hospital staff. Claiming his death was a result of medical negligence, a mob of more than 20 people gathered around the hospital. According to reports, the mob entered the office of the hospital’s senior medical officer. He was initially attacked with fists and blows. When the welfare officer tried to intervene, he was also assaulted.

Dutta tried to pacify the crowd, but couldn’t succeed. According to reports, more people joined the mob and their assault became more serious. The statement issued by the plantation said the mob began to throw stones and other objects at the hospital. In the chaos, Dutta was injured by broken windowpanes. The crowd then allegedly called for the doctor to be lynched.

In the video, which has since gone viral, Dutta can be seen trying to rest his bleeding body against a wooden table. The floor below him is puddled with thick blood.

Reports also say that the mob did not allow Dutta to receive medical help and prevented the ambulance service from reaching the spot for almost an hour. At around 5:30 pm, the magistrate and the police were able to rescue him and provide first aid. Dutta was then referred to the Jorhat Medical College and Hospital, but he breathed his last just a few kilometres away from the hospital.

Dutta was cremated on Sunday. He had spent his entire life in the Teok Tea estate. Apart from serving there as a doctor, he had also been born and brought up in the estate.

Speaking to The Wire, Jorhat’s superintendent of police Vaibhav Chandrakant Nimbalkar confirmed the mob attack. He said 21 people were detained on Sunday and that they will be interrogated. A few hours after the brutal incident, the Teok Tea Estate, run by Amalgamated Plantations Private Limited, was put under lockdown. The company is a major tea producer not just in Assam, but in Bengal too.

The company issued a notice, in which it said:

The lockdown would continue until the employees provide a “written assurance” that they would maintain good conduct and adhere to constitutional means for redressal of grievances, the company said. The employees who have been locked out will not be entitled to wages or other benefits. The company added that “earned wages and ration will be disbursed only when the management feels that the atmosphere is congenial”.

Jorhat deputy commissioner Roshni Aparanji Korati said a magisterial enquiry has been ordered into the incident. The enquiry will be led by Subhan Gowala and a report will be submitted within seven days. “Follow up action on the incident has been initiated. The situation in the garden is under control and under close watch,” the written statement said.

Bhaktimay Bhattacharyya, the nodal officer for the district’s tobacco and tuberculosis control cell, said Dutta was requested by authorities to take the job of senior medical officer at the estate after his retirement. Bhattacharyya, who is also the president of AMSA’s Jorhat unit said Dutta spoke to him a few months ago.

“He offered his help in the ‘End TB strategy’. He had helped us find several TB cases. Dutta served in Teok for many years and delivered many babies in the tea garden. Maybe some of them were also in the mob that attacked him,” he said.

Assaults on doctors in tea estates

Shahdullah, the IMA Jorhat district unit’s secretary said this was the first instance of a doctor being lynched by a mob. “Assault on doctors keep happening. The doctor-patient ratio needs to be lowered. We need protection and better infrastructure. Doctors save lives but get assaulted. Can this be accepted?” he asked.

Assaults on tea-garden doctors are not uncommon. Ripun Karmarkar, a doctor at the Sonowal Tea Estate in Mariani, was surrounded by a mob of more than 300 men last December. “On December 3, a patient was brought dead to the hospital. I asked the staff to follow the usual procedure. The next day, my quarter was surrounded. They said ‘life for a life’. I called the police and I was rescued in time,” Karmarkar said.

Also Read: What Hospitals Can Do to Curb Attacks on Resident Doctors

However, the doctor is shaken by Dutta’s death. “I will offer my resignation on Monday,” he said. He claimed that the plantation workers are usually inebriated and also consume chemicals for intoxication.

There have also been assaults reported in Dikom Tea Estate in Dibrugarh district, Bokakhat Tea Estate in Golaghat district, Khumtai Tea Estate among others. But never before has violence on doctors resulted in death. 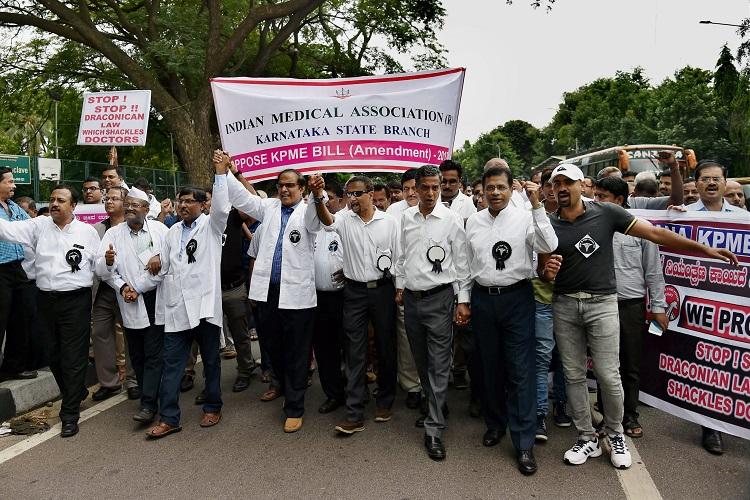 Assaults on doctors are not limited to tea gardens. A few years ago, a mob led by a patient’s family rounded up and assaulted the medical staff of Dohela Majakhili, a state-run dispensary in Goalpara district. The staff was asked to stand outside the dispensary with their arms raised.

Members of the AMSA had demanded the arrest of those involved in the incident. The authorities were requested to utilise sections of the Assam Medicare Service Persons and Medicare Service Institutions (Prevention of Violence and Damage to Property) Act. Under this law, assault on medical practitioners is a non-bailable offence.

In 2015, a female paediatrician in the state-run Mahendra Mohan Choudhury Hospital in Guwhati was also assaulted. The relatives of a woman whose baby died soon after delivery attacked her. The incident also led to medical practitioners protesting against violence.