Kaur's sister believes that the attack on her by the police and the company owners is not just because of her activism but also because she is a Dalit woman.

Nodeep is associated with the Mazdoor Adhikar Sangathan – a union of the workers and farmers – in Kundli. Photo: Special arrangement

Mohali: Among the many stories of arrests and intimidation by the state during the farmers’ ongoing struggle, one story is of 23-year-old Nodeep Kaur – a Dalit woman and a trade union activist who joined the agitation against the new agri-marketing laws in the early days of November.

She was arrested on January 12 – weeks before the mass arrests that happened in New Delhi on January 26 over the tractor rally violence. Nodeep has been denied bail twice because of a range of charges slapped against her, including Section 307 – attempt to murder. The next bail hearing is scheduled for February 8, the day she will complete 26 days in custody. 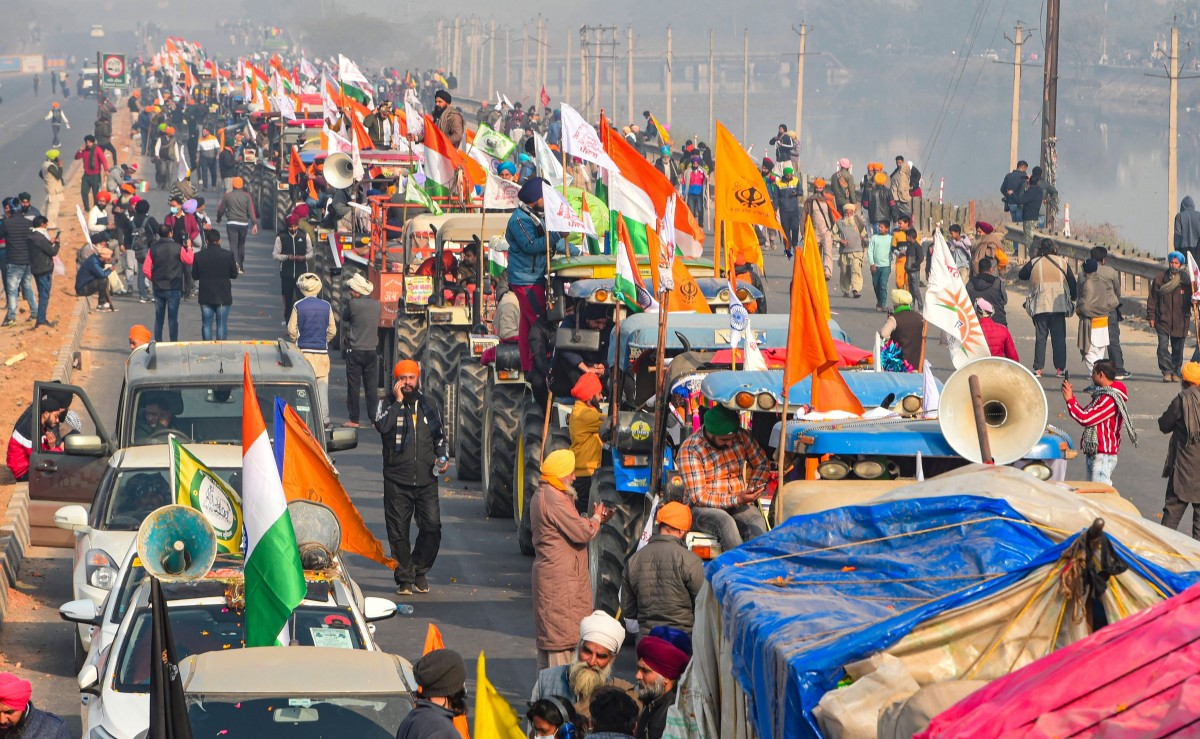 Nodeep Kaur, who belongs to Punjab’s Muktsar Sahib, passed class XII a few years ago, and joined a factory as a worker. Just a few months before she joined the farmers’ agitation, she had started working at a a bulb-making factory, named FIEM Industries, in Kundli.

“She joined the factory because of the economic hardship that our family is facing,” Nodeep’s sister Rajveer said. “She was about to apply to Delhi University soon.”

Nodeep comes from a family of activists. Her parents are associated with the Punjab Khet Union in Muktsar and her older sister Rajveer Kaur is a student activist from Delhi University, and associated with the Bhagat Singh Students’ Front. Nodeep too joined the Mazdoor Adhikar Sangathan (MAS) – a union of the workers and farmers – in Kundli.

Speaking to The Wire, Nodeep’s mother Swarnjit Kaur said, “We aren’t economically well off. So she joined work at Kundli. She was active in the ongoing [farmers’] movement. Even her father was. But now he has gone to Hyderabad. There, he works as a driver.”

Also read: Backstory: The Vantage Point From Which to Tell the Story of the Farmers’ Protests

At the Singhu border, Nodeep mobilised the workers and the farmers in the area together, and at the Kundli border, slogans of ‘kisan mazdoor ekta zindabaad’ echoed, with the MAS and other labour unions joining hands with the farmers’ front.

“Farmers and labourers are inseparable. Workers produce in the factories and farmers produce in the fields,” Kaur had said in an interview, filmed days before her arrest. “The government is selling us, our work, our livelihood to make money for themselves,” she had said.

“Everyday over 300 workers come to the protest site,” Rajveer said.

According to Rajveer, the Haryana administration and the Kundli Industrial Association (KIA) had found the MAS problematic. Besides, Nodeep was already at loggerheads with the factory bodies there.

As a member of the MAS, Nodeep along with her comrade Shiva Kumar have been fighting continuous harassment of workers by the KIA, her sister Rajveer told The Wire.

“My sister and her organisation had been fighting with the industry association at Kundli for a long time,” Rajveer said. “She raised the issue of unpaid dues, exploitation of women workers and harassment of workers among many other things.” Rajveer further explained that the workers of Kundli face continuous harassment by what the industry association calls a quick response team (QRT).

“The QRT’s only purpose is to intimidate workers so that they are unable to organise [protests]. The QRT also targeted the unity of the farmers and factory workers of Kundli. When some workers started joining the protest, the factory owners threatened to fire them,” she alleged.

Nodeep and Rajveer’s friend, Sangeeta, who is associated with the Bhagat Singh Students’ Front at the Delhi University told The Wire that the QRT threatened the protesting workers, including Nodeep, to withdraw from it. Because of her activism, Nodeep was fired from FIEM Industries. She had worked there for over four months. 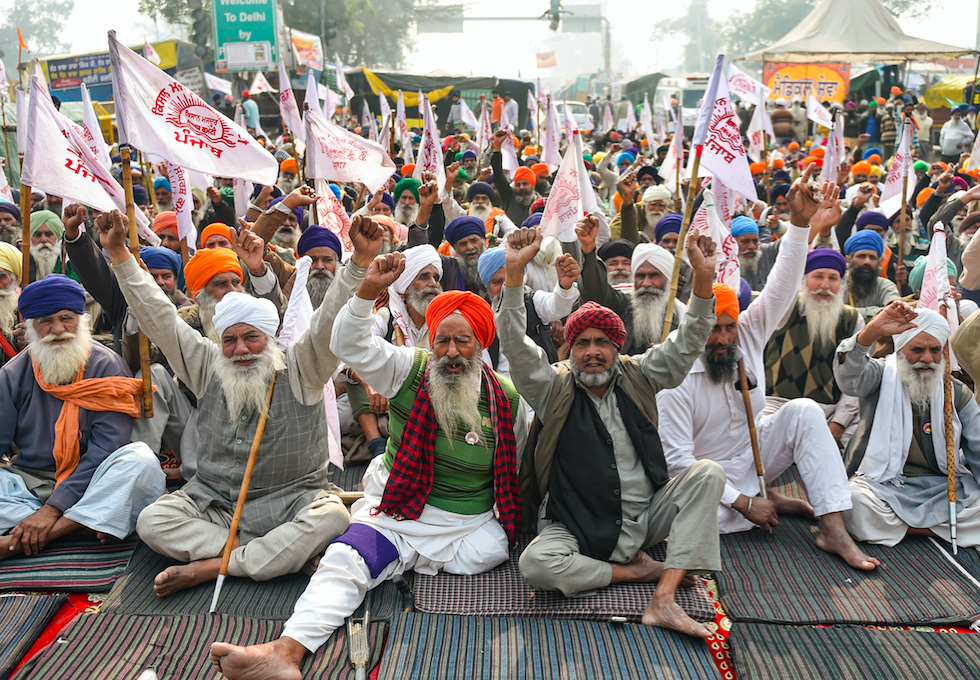 Farmers at the Singhu border on January 28. Photo: PTI

On January 2, when the MAS workers visited the industry association, demanding their unpaid wages, the QRT of KIA fired shots at them. Following this, the workers’ union went to file a case against the association at the Kundli police station. However, the police refused to register an FIR, Rajveer said.

On January 12 – the day when Nodeep was arrested – factory workers approached the management over the issue of non-payment of dues once again, but they faced brutal lathi-charge at the hands of the QRT. Even women workers faced harassment as their clothes were torn.

Nodeep – who was at the centre of this attack – was dragged by the police and beaten up by “the henchmen of the KIA”, Rajveer told The Wire. “She was arrested from the MAS tent which was set up at the Singhu border, and dragged away in cuffs. She was taken to the Karnal police station,” Rajveer said.

According to Nodeep’s lawyer, Jitendar Kumar, a medical examination of Nodeep was sought after she was arrested by the Haryana Police. The lawyer and the family both claim that Kaur’s medical examination was done on January 25 but the report has not been received by either party yet.

Rajveer said that the police beat her up while she was being dragged from Singhu. In addition, wounds on her private parts show that she been subject to custodial torture.

Currently, Kaur has three FIRs against her. She has been booked under a wide range of sections under the Indian Penal Code, including rioting while armed with a deadly weapon, unlawful assembly, causing hurt to public servant, assault and criminal force, trespass, extortion, snatching, criminal intimidation and attempt to murder. “We helped getting workers their due. Roughly Rs 5,000 and they think Rs 5,000 is money worth extortion,” Rajveer exclaimed, while talking about the charges levelled on her sister.

One of the FIRs has been registered by a Haryana police officer, another by an accountant at one of the factories under the KIA and the third one by a private complainant, Nodeep’s lawyer said.

“The sole purpose why Nodeep has been arrested is because they (the government and the KIA) don’t want her to emerge as a leader in this movement. She has worked for the rights of workers and she was also active in the ongoing stir,” Kumar said.

Speaking to The Wire, the president of the KIA, Subhash Gupta, said that Kaur never worked with any of the factories in Kundli. “You should check her background, with what I know, she is not a worker at any of the factories here. She is one of those who did sloganeering at Shaheen Bagh last year,” he said.

According to Gupta, in the early days of January, the workers were threatening factory owners. “…In January itself, some people with red flags came over to our complex, started climbing walls and raising slogans. They would have burst open our heads with their lathis, had our guards not intervened,” he said.

Gupta explained that the QRT was formed by the KIA almost five years ago to guard the complex. “We have been robbed a lot of times. Our generators have been stolen and intruders have tried to get in. That’s the reason why we keep guards. Thanks to them, they also saved us from the flag-carrying, slogan-raising group of people,” he said.

“They wanted to unionise and threaten us,” he added. When asked if the QRT attacked the workers, Gupta denied the claims. Gupta also said that he was unaware of the allegations of custodial torture on Kaur.

On the custodial torture of Nodeep, The Wire tried to speak with the station house officer (SHO) of Karnal police station, but couldn’t get through.

A press statement released by the Campaign Against State Repression (CASR), a body of student unions and progressive and democratic groups, soon after Kaur’s arrest noted: “The targeting of a young Dalit woman who dared to raise her voice for the rightful demands of the workers has been met with the most cruel, misogynistic barbarity of the men in uniform who have resorted to sexual violence. The impunity of the police stands firmly on a Brahmanical, patriarchal, Hindutva ground.”

Rajveer believes that the attack on her sister by the police and the company owners is not just because of her activism but also because she is a Dalit woman. “There is discrimination everywhere,” she said. She also believes that the fact that her story took almost a month to create a stir in the media landscape is also because of the same fact. “It is true, but we will prove that all allegations against her are false,” she said with conviction.

Rajveer said, in December, a group known as Hindu Jagriti Manch, attacked the workers associated with the MAS. They attacked them for mobilising with the farmers and against the company owners. “They too are in collusion with the factories, the government and the police,” she said.

On February 3, a citizen’s march in solidarity with the farmers’ movement was held at New Delhi’s Mandi house. Delhi University’s student unions, the AISA, the AISF who are also part of the CASR raised voice against the torture and arrest of Nodeep.

on january 12—haryana police abducted nodeep kaur from her tent at singhu protest. since then she has been beaten & sexually assaulted while under police custody.

nodeep is 23 yold punjabi dalit woman & trade union activist who has been bravely speaking up about the protests. pic.twitter.com/XvN6TJwKj8

Note: An earlier version of this report had erroneously stated that Nodeep Kaur’s medical report had been received by her family and lawyers. The error is regretted.