COVID-19: With No Food or Government Aid, Loom Workers in Bhiwandi Fear the Worst

Most of the six lakh workers who spin the yarn and make cloths in this textile town are migrants with meagre incomes. With work suspended and nowhere to go, they are desperate.

Bhiwandi: Each time someone new walks into the arterial lanes of Kondachiwadi basti at Bhiwandi, a large number of people immediately swarm around the person. Amid the commotion, desperate voices can be heard making myriad inquiries, all seeking the same answer. “Kaha se aaye ho, ration laaye ho kya? Kuch khaane ka intezaam kar sakte ho kya?” (Where have you come from? Have you got some ration for us? Can you arrange for some food here?)

The concept of “social distancing” is impractical when food stocks are running low and people are worried about their future.

It has been eight days since the Maharashtra government imposed a complete lockdown in the state as a precautionary measure to control the spread of the coronavirus. But this sudden announcement has had the worst impact on migrant labourers and daily wagers, virtually pushing the over six lakh migrant power loom workers in Bhiwandi towards starvation.

“We first listened to the chief minister (Uddhav Thackeray) and a day later to the Prime Minister (Narendra Modi) and decided to stay back. But now, we are left here with no food or aid from the government. We will all die of hunger even before the virus catches us,” says 50-year-old Mohammad Sajjad Ansari, despondently.

Since the lockdown, Ansari and six others – all from Madhubani district in Bihar – have been cooped up in a small seven square feet room. “We are all caged in this tiny room. Even if we try to step out to get some air, the police rain lathis on us. With no money, or food on our plate, it is difficult to stay here,” Ansari adds.

The decision to heed the government’s advice and staying put in Bhiwandi, over 30  kilometres from Mumbai, is proving calamitous for most labourers. The city of power looms is home to workers migrating from as far as Assam, West Bengal, Uttar Pradesh, Jharkhand, Bihar, Andhra Pradesh and Karnataka.

Every lane is dotted with big and small looms. The locals estimate that at least six lakh workers operate the over 15 lakh operational looms to spin yarn and make cloth. There are an additional one lakh daily wage workers who work as loaders and transporters at these looms.

On March 21, as soon as CM Thackeray ordered the shutdown of workplaces until March 31, power looms in Bhiwandi immediately fell silent. “This was a momentary announcement, we thought. Something that would end in less than two weeks. We asked our workers to stay back and food was available to them,” shares Shadab, an owner of over 200-power loom machines. But two days later, all trains were shut down too. And on March 24, PM Modi announced an extended three-week lockdown of the entire country.

Soon after the announcement, several workers had tried to rush to the Kalyan railway station, which is 14 kilometres away. But trains and other transport had already stopped. With no transport available, they had to walk back to the looms.
The situation since then has only worsened and many fear the coming days will take an extreme turn if their most basic requirements like food and medicines are not take care of.

“If we stay here like this for one more week, there will be a food riot,” Sham Mohamed Islam, a 25- year-old labourer said.

Most workers have been working here for over a decade. They get paid for the work they complete. Labourers work double shifts, extending up to 16 hours, without a break and at the end of it, manage to make only a meagre sum of Rs 300-500. The shutdown has worsened the situation for the labourers as the loom owners have unanimously decided not to pay them until the curfew is lifted.

“No work for nearly a month is proving fatal for us. Our employers have informed us that money won’t come until the lockdown ends,”26-year-old Sadik Shaikh said. Shaikh’s agitation and anger are focused on PM Modi’s decision to lock the country down without thinking of those who can’t survive another day without work. “Modi’s decision to save the country is actually proving to be an order to starve us,” he says.

Shaikh, who is originally from a village in Kurnool district of Andhra Pradesh, has been working at the loom in Bhiwandi for nearly a decade. Like every year, he and five other colleagues went back home for the seasonal harvest. “We returned on March 18 and within three days, this drama unfolded,” Shaikh says.

Shaikh and his six co-workers from Kurnool are all living in a small room of eight square feet. They have got some dry wooden logs and have been cooking in that space since the past week. “We had carried a few kilos of rice and lentils on our way back. We have been cooking and eating what we have. This food will last us for another two days at best. But what should we do after that?” Shaikh asks.

The economic slump has affected the power loom industry deeply and most loom owners have run up huge losses. Two decisions by the Centre – demonetisation and GST – have dealt a crippling blow for most loom owners and workers here. “Our business has drastically slowed down in the past decade. And such decisions only cripple us further. We are helpless, trying every bit to find some help for our workers. Unfortunately, it is not proving enough,” says 45-year-old Ishtiyaque Ahmed Ansari, who was recently forced to sell 106 power loom machines to a scrap dealer.

Ishtiyaque and some friends have started a relief camp for the workers here, providing cooked food and food kits to the needy persons.

Bhiwandi has always remained a neglected region. Even though it is just on the outskirts of Mumbai, it lacks basic amenities. Sanitation, local transport and health services are all ailing. Almost 80% of Bhiwandi’s population is made up of migrants. Most of them come from the lower caste Muslim (Pasmanda) communities like Momin or Qureshi. These workers, even after spending several decades in the town are considered “outsiders” and the civic administration has largely neglected them.

Auto-rickshaw driver Hafis Shaikh has been selling vegetables since the lockdown to support his family. Photo: Sukanya Shantha

As soon as the lockdown came into effect, loom owners who could afford it provided some extra payment to their workers. Some even tied up with the local mess and requested that their workers be provided food on credit until the end of the month.

Most men work for 8-10 months and return to their families for the remaining period. Even though they spend a major part of the year in the looms here, all their documents, even their ration cards are registered on their native addresses.

Power looms are a male-oriented workspace, where labourers from North India travel to Bhiwandi for work. They live in a group, in a very small room. They all depend on mess services for food and have no space to cook.

Almost all mess services have decided to stop serving food.

“How long can we really feed others when we ourselves don’t have the money to buy food grains?” asks Mohamed Israr, who has been running a mess service which feeds over 200 workers.

Most labourers are also worried about their families back home. Thirty-two-year-old Mahesh says he hasn’t been taking calls from his wife. “My father, wife and four children depend on my earnings. If I don’t send money, they won’t have food there. My wife has been making anxious calls every day and I don’t have the heart to even tell her that I am surviving here on dry rotis and water,” Mahesh says, as his eyes welled up. 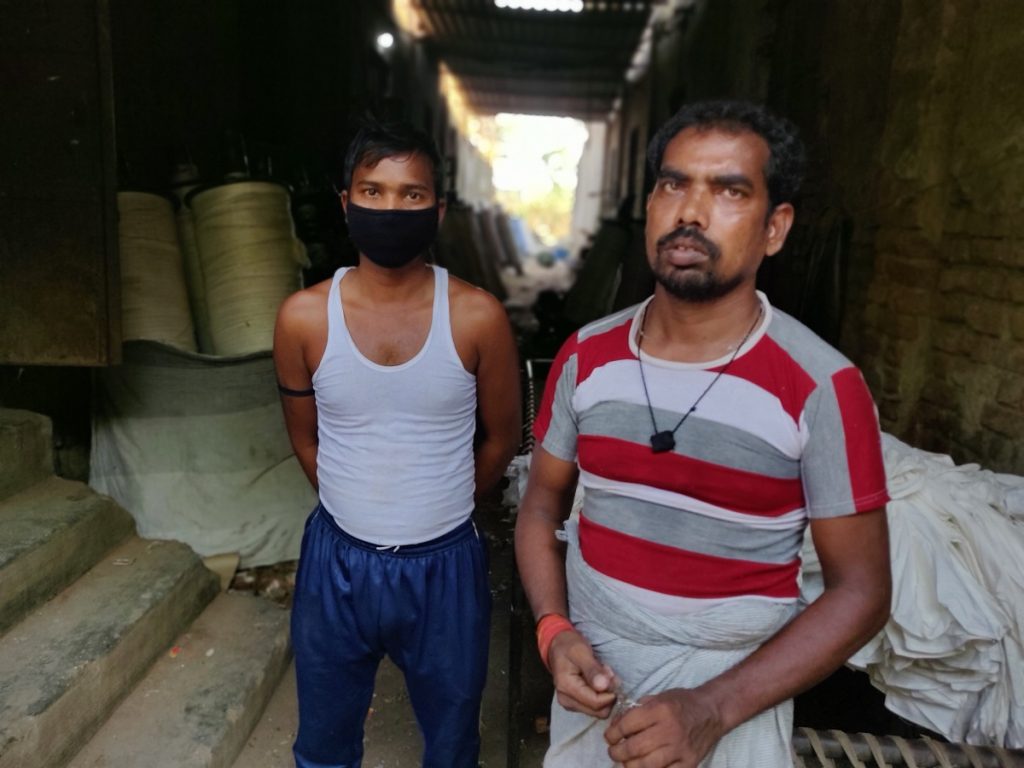 Mahesh and Sanjay, two labourers from Maharajganj district in Jharkhand have been stuck in Bhiwandi without any earning or food. Photo: Sukanya Shantha

Mahesh says he is preparing himself for the worst. Starvation, violence, mass exodus: desperation can push a man to do anything, he says. “But for each life lost, only Modiji is responsible,” he says. “After all, he asked us to all stay back.”