The pandemic has devastated the lives of Indians across classes and castes but will it help shape a new intersectional approach to public health and politics?

A man walks past burning pyres with people who died from the coronavirus disease (COVID-19), on the banks of the river Ganges at Garhmukteshwar in the northern state of Uttar Pradesh, India, May 6, 2021. Photo: Reuters/Danish Siddiqui

In Necropolitics (2019), Cameroonian philosopher Achille Mbembe describes the power of ‘liberal’ democracies – which never addressed or abandoned their founding violence of dispossession, exploitation, and extraction – to give death and withhold death as the sovereign rite of regulating life. This “necropower” is exercised not only through spectacular, if occasional, forms of terror but also by inflicting “small doses” of death on people living “at the edge of life”.

Such “molecular violence” –  a slow haemorrhaging, a gradual exposure to death by means of enslavement, exploitation, everyday forms of pain, injury and debility – then becomes the very fabric of political order. In other words, necropolitics treats certain bodies as disposable and expendable through outright strangulation and confinement or acts of abandonment, indifference and neglect.

In India, the devastation caused by SARS-CoV-2 illustrates the layered manner in which necropower operates. At a time when the lines between a failing state and a flourishing virus are blurred beyond reprieve, and mass death and disease are dramatising the destruction of our health systems, we would do well to recognise the necropolitics at play in the pandemic.

Our everyday record is replete with stories about the labour of countless mortuary workers, sanitation workers, sweepers, cremation-ground workers and last-mile caregivers – who inordinately belong to Dalit or ‘lower’ caste backgrounds – performing caregiving’s final acts. That the Indian state routinely exposes such bodies to deathly conditions and infections without ensuring basic personal-safety equipment, insurance and pensions for them and their families evidences India’s casteist necropolitics of ‘care’.

The same can be said for countless unclaimed corpses relinquished by crematoriums and floating in India’s holiest rivers, whose invisible wounds of suffering and burials on liminal shorelines foretell lives from which even death escapes without a trace. Likewise, those living on the many edges of India, who routinely perform debilitating and humiliating forms of caste-labour, also routinely experience apartheid-like forms of residential segregation and long-term toxic exposures, and thus exist with chronically debilitated immune systems and fractured physical and mental health. Since liberal democracies work to erase and deaden any awareness of this slow violence, there is no real chance of interrogating its foundations.

Against this backdrop, what is ‘new’ about India’s necropolitics today? While the state is facing an emergency in which the biggest enemy is nature itself, the pandemic has enlarged the theatre of human suffering in three distinct ways. Relatives of a person who died from the coronavirus disease (COVID-19) collect ashes at the spot where he was cremated, as part of a ritual at a crematorium in New Delhi, India, April 30, 2021. Photo: Reuters/Adnan Abidi

First, the new viral necropolitics is going beyond those living merely “on the edge of life” in India. In the first wave of COVID-19, those directly performing precarious acts of manual and material labour for the state like migrants, casual labourers, informal workers, the socially unmoored and ‘lower’ castes were conspicuous in their afflictions – if not of disease then of unemployment and involuntary migration.

In contrast, India’s second wave of COVID-19 is visibly vanquishing even India’s middle and upper-middle classes and castes whose distinct struggles for ventilators, oxygen cylinders, hospital beds and vaccines reveal the cracked landscape of tertiary health systems in the country. On an unprecedented scale, today’s viral necropolitics is impacting the privileged thereby producing particular health crises for India’s entitled citizenry (and netizenry).

Long accustomed to forms of well-being sanctioned by their socio-economic and cultural status, India’s privileged classes are now finding their worst nightmares coming true. Individual privileges that entitled them to health in life (indeed, even dignity in death) are being hollowed out in the pandemic by dramatic experiences of suffering, which social media and smartphones are allowing to archive and transmit globally in real-time.

Ironically, the privileged are themselves reporting that their social, economic and political immunities have completely failed to protect or heal them. Anthropologically, this compels us to ask whether class privilege is truly being transcended in these appeals of suffering or merely being transformed into an exclusive class-based crisis? The important question is, will privileged appeals to political and civic failure have any consequences for attaining broader, inclusive forms of health justice in India?

Also read: The Reasons To Believe India’s COVID Tragedy Is Worse Than It Looks

Second, India’s new viral necropolitics is potently reshaping upper and middle-class and caste notions of corporeality and touch. The uncremated corpse lying in wait for a pyre bundled in body-bags and concealed from the fear of contamination, is among the defining symbols of our times. Such symbols secrete classed notions of disgust, contempt, fear and filth, which are being publically produced and channeled in the pandemic. The virulent dead having to be disposed from a distance as if they were ‘untouchable’; never before have India’s privileged classes and castes experienced this ‘as-if untouchability.’

While it can’t and mustn’t be equated with deep-rooted forms of caste untouchability practiced against Dalits in India for centuries, the role of touch as a privileged class and caste signifier shouldn’t be discounted. For the middle and upper-middle classes, the notion of untouchability hitherto existed only vis-à-vis Dalits and ‘lower’-castes. India’s new viral necropolitics is reshaping the problem of untouchability for the privileged qua themselves. What ethico-moral potentialities does such suffering hold? Will our systems of planning, policy-making and legislating health peopled by the same middle and upper-middle classes and castes now truly begin paying attention to the real ‘public’ in ‘public health’? 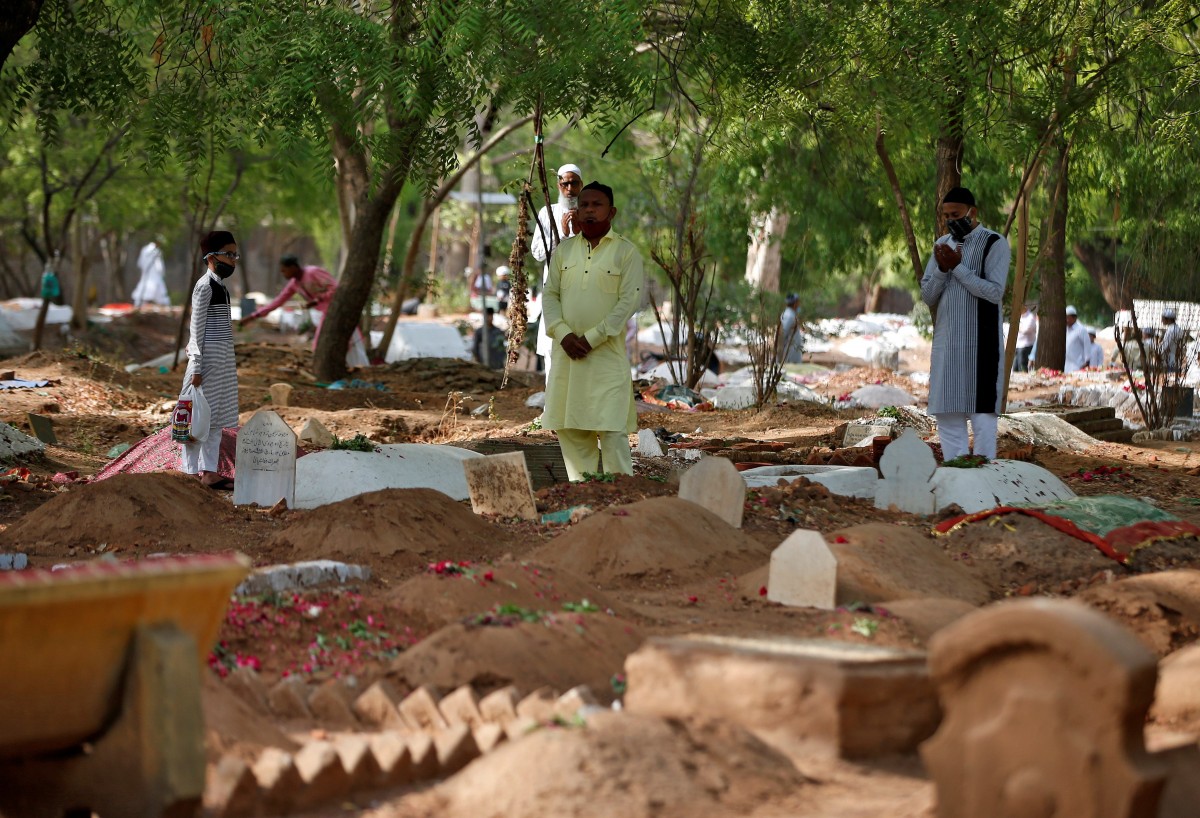 Third, the new viral necropolitics is revealing tensions within India’s conventional coalitions of necropower. The suffering of the privileged is undoing the political unity vital for the state’s lethal necropower to exclusively function against those living on it’s edges. The Indian state can no longer pretend to act as a “civilized” functionary of terror and violence, for among the acutely wounded are the state’s closest socio-economic, political and cultural benefactors and allies.

Their experiences of injury coupled with the state’s failure to provide healing are diminishing the state’s ethical record to care even for it’s most privileged subjects. Will these transformations of privileged suffering translate into concrete political reallignments against the state? Will India’s middle and upper-middle classes and castes be able to forgive the state for it’s failure to protect their lives and give them a ‘good death’? Or, politically, will this only result in more exclusive “zones of immunity” for the privileged?

From an anthropological perspective, these three aspects of India’s new viral necropolitics may be noteworthy but they aren’t easy to realise structurally because of the deep hold of caste, class, gender, ethnicity and other markers of difference on Indian society. Yet, we must ask, how radical is their potential in everyday terms? Do novel alignments of class-based suffering possess the power to reimagine and overhaul India’s public health infrastructures for all? Will India’s new viral necropolitics impact and inform the demands for intersectional health justice? Will it interrogate and heal wounds caused by structural violence against Dalits, ‘lower’ castes and the country’s living-dead for whom health systems have been always been egregious?

Importantly, will novel forms of political unity be established between the suffering classes, castes and masses to demand accountability from the failing state? Or will necropolitics destroy these novelties in an endless cycle of perpetuating stratification? The present health crisis is unveiling exceptional forms of suffering yet it also holds an everyday potential to radically reorder the social, political and ethical calculus of care in India. Do we have what it takes to heed it’s macabre signs?

Nikhil Pandhi is a doctoral candidate in medical and cultural anthropology at Princeton University. He is also a Rhodes Scholar.