IMA Calls For Law to Protect Doctors From Harassment, 'or Black Day on April 23'

The medical practitioners' body has asked for a symbolic protest with candles on April 22. 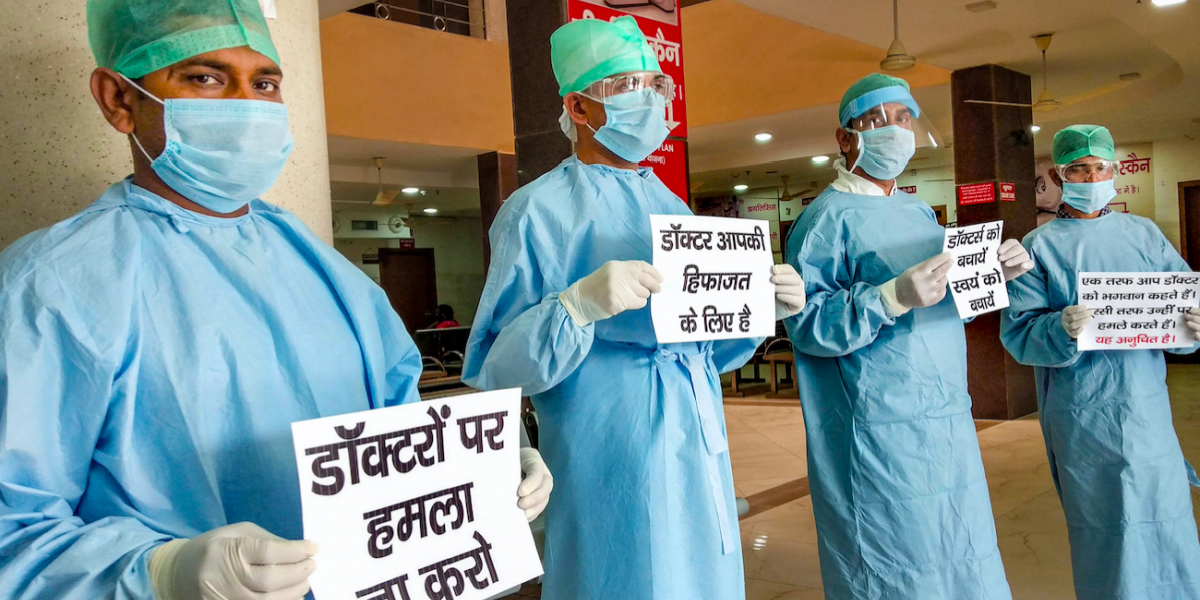 Doctors hold placards as they protest against the attack on medics at various places during coronavirus inspection rounds, amid the nationwide lockdown, in Prayagraj. Photo: PTI

New Delhi: The Indian Medical Association has called for a candlelight vigil on April 22 and the observance of a ‘Black Day’ to protest against violence and discrimination faced by medical practitioners treating COVID-19 patients on the following day if the government does not act on their behalf.

The national organisation which looks after the interest of doctors has also asked the Centre to pass a stringent act to protect doctors and “restore their dignity.”

“Doctors have been abused, beaten up, denied entry and resident. Obstruction to cremation is the last straw that IMA can bear. If dignity is denied even in death, our patience and restraint lose their value,” the statement says.

The call was given by the IMA after several incidents of harassment faced by medical practitioners looking after COVID-19 patients, in the hands of patients, people to be quarantined and their own neighbours came to light.

The IMA has issued what it is calling a “white alert” for a symbolic protest at 9 pm, with candles, on April 22.

“If the government fails to enact [a] Central law on violence on Doctors and Hospitals even after White Alert IMA declares Black Day on 23.4.2020,” reads the statement.

The letter is signed by Dr Rajan Sharma, national president of the IMA, and Dr R.V. Asokan, honorary secretary general of the IMA.

As many as 28,000 doctors from across the state will take part in a candlelight vigil at their respective places at 9 pm on April 22, secretary of the IMA’s Gujarat chapter Dr Kamlesh Saini told PTI.

The burial of deceased Chennai doctor Simon Hercules, who it is being suspected may have contracted COVID-19 from patients, made news after it was was met with stiff opposition from locals. His family and friends were attacked by locals near a burial ground.

In Chennai as well, the cremation of yet another doctor who died of COVID-19 met with opposition from locals.

Two women doctors were injured in Indore when a team of health officials was pelted with stones while they were trying to trace a person who had come into contact with a COVID-19 patient earlier, police said.

In Moradabad, a team of doctors and medical staff was attacked by a mob in Nawabganj area after they had gone to quarantine a family which had lost two members to COVID-19.