CID and State Human Rights Commission reports contradicted the police’s claim that the victim was a militant who died in crossfire. But no genuine investigation into the case was carried out.

Muhammad Ramzan was allegedly killed by the police on the night of May 31-June 1, 1996. Photo: Special arrangement

Srinagar: Twenty-five years ago, Jameela Begum of Miskeen Bagh, Khanyar, pledged that she would fight to the last breath of her life to ensure punishment to those who killed her husband.

“After his body was handed to us for burial, I ensured that my young sons had a look at their father’s body before his burial. When his ghusul (the Islamic ritual of washing the body before burial) was being performed, I vowed before his body that I would not rest till I got justice for him,” said Jameela, who was 35 years old when her husband was killed.

Jameela’s husband Muhammad Ramzan was allegedly killed by the police on the night of May 31-June 1, 1996. The police accused him of being a militant and claimed he was killed in a gunfight after militants concealed in a hideout in Miskeen Bagh fired upon security forces.

Most Kashmiris remain silent when their loved ones are killed due to fear of retribution. But Jameela decided to fight back.

“I knocked at every door to get justice for my husband. I met politicians like Farooq Abdullah, Mufti Muhammad Sayeed and Ali Muhammad Sagar, as well as several top police officers to seek investigation in the case and punishment for those involved in killing of my husband. But they did nothing,” she said.

In 2006, she had the case reopened, but the special investigation team (SIT) constituted by the police did nothing to probe the case. She approached the State Human Rights Commission but its recommendations were never implemented by the then Jammu and Kashmir government.

But she did not give up. And now, on October 28, 2021, a court in Kashmir valley has ordered the Jammu and Kashmir police to have an SIT headed by an officer not below the rank of deputy superintendent of police to probe the case.

“It is very unfortunate that the investigating agency has not viewed the matter with a serious sense of responsibility expected of them, that too when their attention was drawn to the serious situation by the report of the Additional Director General of Police, Crime Investigation Department (CID), Srinagar, and the postmortem report,” the court said. 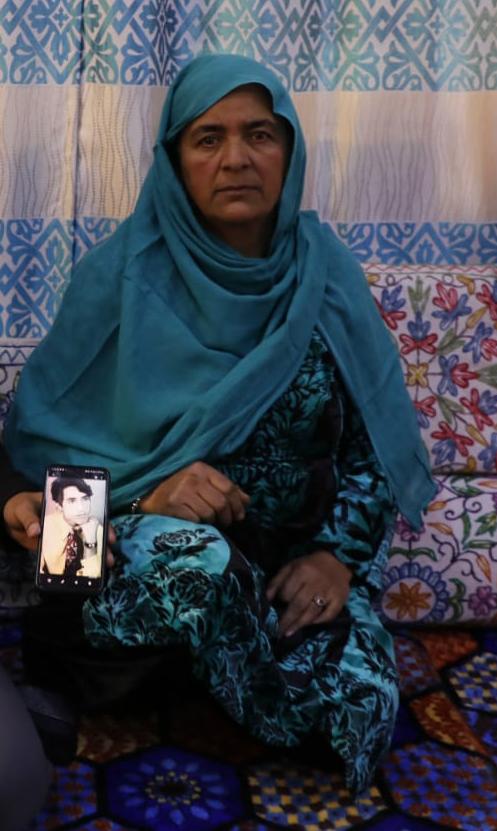 Jameela Begum holding up a photo of her deceased husband. Photo: Special arrangement

The court also directed the SSP to investigate the role of the then investigating officer and the station house officer of Rainawari police station, as well as other officials who played a key role in the investigation of Ramzan’s death before the case was reopened in 2006, and fix responsibilities.

“The court directed the police to investigate the role of the SIT constituted for the investigation of the case after its reopening in 2006 as well,” advocate Tabbasum Rasool, who is representing the victim, told The Wire.

She said that they had approached the court of the chief judicial magistrate (CJM), Srinagar, on March 5 this year, to seek a status report on the case.

“The CJM directed the station house officer of Khanyar police station to file the status report of the case in 10 days. On March 17, they submitted a report stating that they had already filed the challan (report) before the court. Subsequently, we found that challan had been presented by them on March 15,” she said.

The advocate said the family later filed a protest petition against the closure report.

“The court passed the October 28 order as per the materials on record in the challan/ikhtitami and after recording the statements of the police and the protest petitioner,” she said.

It also reveals the deceased’s eighth, ninth and tenth ribs were fractured and he had ecchymosis around the right eye.

The CID field verification report corroborates all the claims made by the family of the deceased.

In a communication to the deputy inspector general of police, Srinagar, on October 20, 2005, the CID wrote that according to the field verification report, it emerged that two armed guards had borrowed some essential commodities from Muhammad Ramzan Bhat, who ran a grocery shop near his house.

The guards got annoyed when Ramzan demanded money from them and with the help of the Special Operations Group (SOG) Rainawari, they had him arrested together with a man named Mehraj-ud-Din and tortured him to death.

The CID report also states that the guards and SOG Rainawari then threw the dead body in a stream.

In its order, the court said that no material had been placed on record to substantiate the fact that the deceased, Muhammad Ramzan, and the other person, Mehraj-ud-din, were militants.

“It has been alleged in the instant case that both the deceased were   terrorists   and   were   involved   in   multiple   terrorist activities including the killing of three civilians, kidnapping and other various action against security forces. However, no material has been placed on record to substantiate the fact. It is important to mention here that the deceased have been shown involved in kidnapping, attacks on security forces and killing of three civilians. However, the outcome of the cases registered in pursuance of those acts has not been placed on record. There   is   no   substantial   evidence   on   record to substantiate the said fact,” the judge said.

The day it happened

Jameela vividly remembers May 31, 1996, the day SOG personnel picked up her husband from his shop.

“He had returned home after four days and after a cup of tea, he went to his shop. At about 5.30 pm, I heard a girl from the neighbourhood tell her mother that military men had entered the locality. I panicked and went outside to see what was happening and was shocked when I saw SOG personnel beating up Ramzan. The two armed guards who owed money to my husband were also with the police. I pleaded with them to let him go, but they did not listen and instead hurled abuses at me and my sister-in-law. They bundled Ramzan into a white Gypsy and sped away. I tried to chase them but they resorted to aerial firing to scare us,” she told The Wire.

Jameela and her sister-in-law followed the police Gypsy to Rainawari police station by enquiring about its movement from pedestrians.

The next morning, Jameela and her sister-in-law went to an ikhwani and offered him her golden earrings if he would provide them with any clue about her husband’s whereabouts.

The Ikhwan was a state-sponsored civil militia set-up in 90s in Kashmir. It was later disbanded.

“He kept denying that they had picked up Ramzan. Then he told us to go home and visit police station after 2 pm,” she recalled.

“In the meanwhile, a neighbour told us that his body had been found at Miskeen Bagh. I went there and saw my husband’s body in the nallah (stream). There were torture marks all over his body,” she said, struggling to control her tears.

The recent court verdict has strengthened the family’s resolve for justice.

“We are hopeful that we will get justice. The government should arrest those who killed my husband. Why they have not been arrested yet? The court and police records have established that my husband was innocent and was killed in cold blood,” Jameela said.

Created in 1994, the special task force or special operation group of the J&K police has seen much criticism for human rights violations, especially in the period between 1994 and 2002. In 2003, the People’s Democratic Party-Congress government informed the J&K assembly that 49 complaints had been received against 53 SOG officials for their involvement in different cases.

Of these 53, 25 officials who were found guilty during investigation were dismissed from service while challans were produced in courts against 25 other officials, the government had said, adding that the cases against the remaining three officials were still under investigation.

In 2006, the senior superintendent of police, Srinagar, had ordered the SIT of the North Zone to reopen the case.

According to the October 2021 court order, the SIT failed to furnish a progress report on the case.

“Perusal of the record further reveals that after the matter was entrusted to SIT North Zone, various communications have been issued to incharge SIT and was directed to furnish its report (sic), however, the SIT failed to furnish any progress report on the case,” reads the order.

In 2007, the State Human Rights Commission also questioned the police allegation that the deceased was a militant. “The report of the police doesn’t inspire credibility because had there been any firing from the alleged hideout, some persons of the raiding party would have been injured. There is no such injury caused to the raiding party,” the rights body said.

Umer Maqbool is an independent journalist based in Kashmir.

Note: An earlier version of the report contained the word ‘reinvestigation’ in the headline and said that Jameela and her sister-in-law went to the police. These errors have been rectified.