Coronavirus Has Revealed Just How Much Our Cities Exclude the Poor

At few other times in recent history have we been forced to confront a reality as starkly as the one facing us now. But where will we go from here?

A migrant worker holds her daughter's hand as she tries to board a crowded bus to return to her village, during a 21-day nationwide lockdown to limit the spreading of coronavirus disease (COVID-19), in Ghaziabad, on the outskirts of New Delhi, India, March 29, 2020. Photo: Reuters/Adnan Abidi

Only last month, the Ahmedabad Municipal Corporation constructed a wall to hide a cluster of slums from the sight of US President Donald Trump when he visited India.

The over-half-a-kilometre wall, hastily put up on the eve of Trump’s visit to the city, drew sharp criticism from various quarters. But invisibilising the poor and the spaces they live in – resettlement colonies, slums, city streets – has, for long, been familiar to India’s political and social culture. A culture sustained by structural exclusion and economic marginalisation.

It was finally left to a deadly, invisible contagion to temporarily reverse the process of enforcing such invisibility. The abrupt events of the past few days have pushed the middle classes out of the streets. In their place, thousands of migrant workers and daily-wage labourers have emerged from the shadows, taking over streets and occupying television in a way they never have before.

The visual imagery of thousands of migrant workers walking hundreds of miles, trying to reach their homes across India’s villages and towns, put the lie to several myths about the state of the country. If the idea of removing poor people from the view of foreign VIPs was meant to project an image of a shining India, that image now lies in tatters.

Over the course of the last three decades, we have often heard politicians talk about transforming Delhi and other metropolitan centres into ‘world-class’ cities. After coming to power, the Narendra Modi government too advanced that idea. India is now ready to have ‘smart cities’, the prime minister boasted. Schemes were rolled out to empower a ‘digital India’ that would drag us from analog misery.

A government of India website on smart cities says the project, aimed at “comprehensive development of physical, institutional, social and economic infrastructure,” will improve the quality of life and attract people and investment.  Smart cities, were they even to materialise, would have made little difference to their lives lived on the margins of mainstream society. Meanwhile, the urban poor – those who built the malls, highways and high-rises the rest inhabit in comfort – have continued to live a life of exclusion and marginalisation.

The recent lockdown and pandemic have revealed the depth of that exclusion. Shunted from city to city, migrant workers are now quarantined wherever they managed to reach in their long march homewards.

Home is still a long way off. Why were workers so desperate to reach home even when it meant walking for several days? Human instinct, in a crisis, is to look towards home, considered to be a place of safety. “Staying home is typically what a person does to avoid danger, or more specifically, personal harm. This is the deep cognitive groove ‘home’ has carved into our brains, no matter how irrational, given what the reality of home, depending, might be,” Heidi Julavits wrote recently. 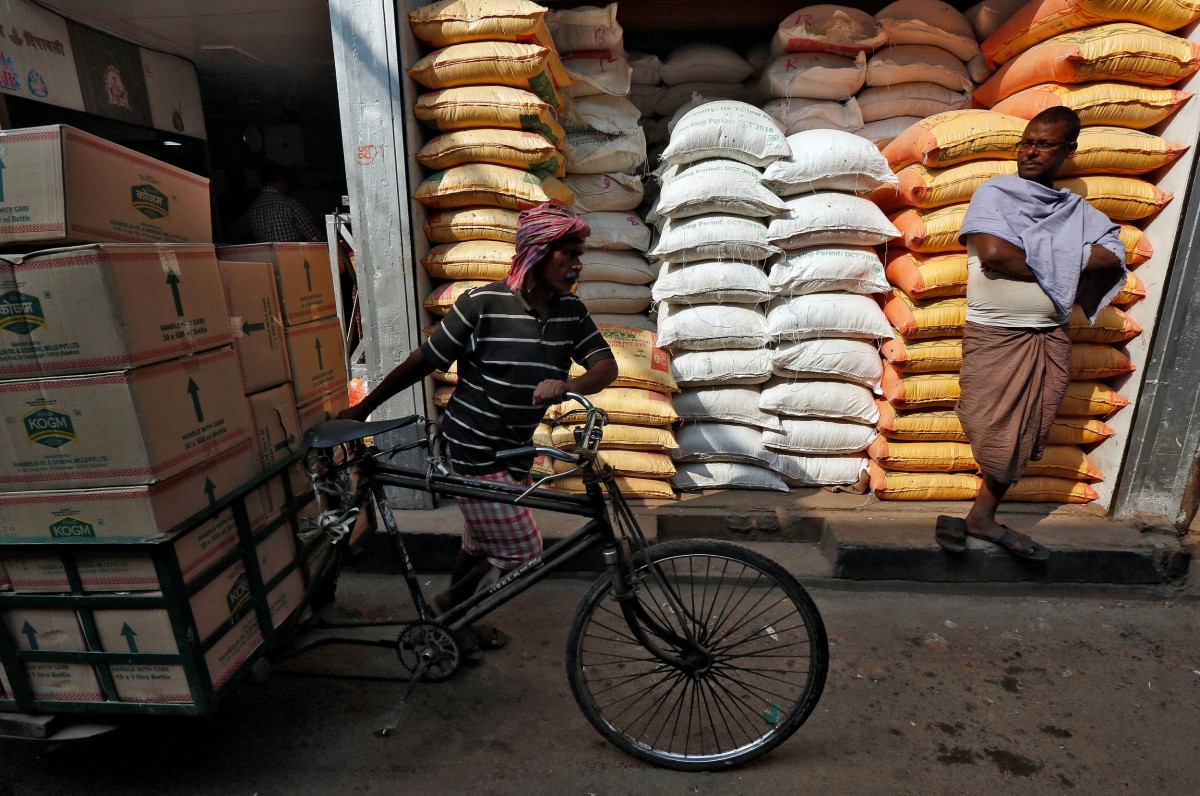 A labourer carries vegetable oil packets on a tricycle as a man stands in front of his shop selling food grains, at a wholesale market in Kolkata, India, January 4, 2017. Photo: Reuters/Rupak De Chowdhuri/File photo

There is yet another layer to this tragedy. Even before they could stand once again on their feet, the victims of the communal violence that left 53 dead and several injured in northeast Delhi in February have been dealt another severe blow. Those whose homes were burnt down have been asked to leave the temporary camps they had taken shelter in. Journalist Amrit Dhillon, visiting the riot-hit areas, wrote about the stark situation staring survivors in the face. Their lives destroyed by the violence, the coronavirus pandemic has hit Muslims harder than the many others. “The pain of losing a home is still fresh. Now the coronavirus is battering them all over again,” Dhillon writes.

We don’t need to look far to find evidence of how the poor – workers in the informal sector who have given so much and reaped such little reward of globalisation – are everywhere and nowhere at the same time. In homes, educational institutions, workplaces, in banks, restaurants, airports and shopping malls. There is virtually no space that could function without the exploited labour of a population made redundant to the story of Indian success.

Well-heeled parents whose homes are swept, dusted clean, and whose meals are cooked by domestic workers who live in dire poverty, are reluctant to let their children sit next to their own in schools. In households, domestic workers are often not allowed to eat food out of the same plates or drink water from the same glass. They cannot sit on sofas and chairs they keep free from dust. How many people who watched award-winning films like Parasite in theatres spent even a minute thinking about the ways their actions perpetuate exactly the inequalities that film criticises?

Also read: A Poor Deal: What Alternative Are We Offering to Migrant Workers?

One is reminded of Mrinal Sen’s Kharij, where a middle-class Bengali family, on a cold December morning, wakes up to discover the dead body of Palan, their minor domestic help, sleeping on the kitchen floor. The film raises questions about middle-class apathy towards their domestic workers.

The erasure of the poor in a country riddled with poverty is an ironic fact of Indian life. We have learned to function like split personalities, turning away from scenes we don’t want to see while consuming voraciously everything we can. At few other times in recent history have we been forced to confront a reality as starkly as the one facing us now. But is there any reason to think confrontation will amount to anything significant? Or will we continue to stockpile and sanitise while watching the thousands who are left to fend for themselves however they can?