Fisheries markets collapsed in the first days of the lockdown, impoverishing hundreds of thousands of small fishers in India. Recovery is nowhere in sight. 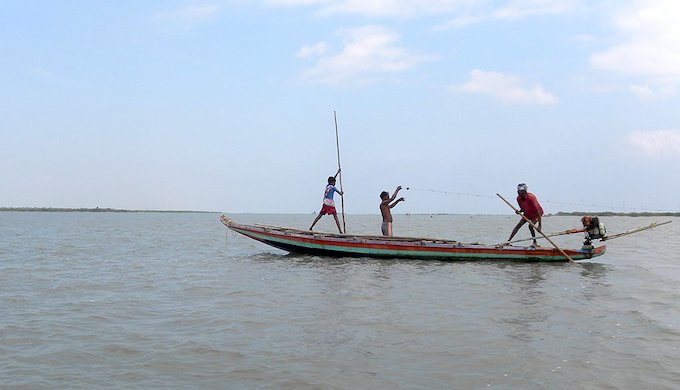 For fishers of Pulicat, Tamil Nadu, the lockdown forced by the COVID-19 pandemic has worsened the problem of diminishing catch due to climate change and pollution Photo: Jency Samuel

When Pradip Chatterjee, president of Dakshinbanga Matsyajibi Forum (South Bengal Fishers’ Forum – DMF), starts talking about the problems that plague small scale fishers in West Bengal, there is no stopping him. He finds a multitude of issues that confront them, from climate change to COVID-19. DMF is a member of the small scale fish workers union, an all-India collective of small scale inland and marine fishers as well as allied workers.

The lockdown being implemented to contain the spread of COVID-19 has affected the day-to-day livelihood of small fishers. “Lockdown in many areas forcibly shut down the fishing activities. There is severe disruption in the supply chain. So even if we fish, we cannot sell the catch,” said Chatterjee.

Inland and marine fishers have all been severely affected by climate change and pollution, with the lockdown adding to their woes. It has hit an industry where marine fishers alone produced 3.69 million metric tons in 2018, when statistics were last compiled by the Central Marine Fisheries Research Institute (CMFRI). That was already down over 6% from the 2012 catch of 3.94 million metric tons.  of catch in 2012. There is no reliable estimate of production by inland fisheries.

And it has been a double whammy for the fishermen on India’s east coast, since the annual 60-day fishing ban to allow breeding started on April 15.

Many fishers who were at sea were caught unawares when the government announced the lockdown on March 24. Tulsi Bhai Gohel, president of a boat owners’ association in Veraval, Gujarat, says 8,000 fishers from Maharashtra and Gujarat alone were at sea at that time.

“There were no buyers and traders when we reached Veraval. We sold ribbon fish at Rs 50 ($0.67) per kg to the few buyers who came. Usually we sell it at Rs 200 ($2.66) per kg.” Fishmeal plants are shut because there is no labour. Gohel says, “Fishers are throwing the catch back into the sea.”

Further south along India’s west coast, a Maharashtra-based official of the Marine Products Export Development Authority (MPEDA) said since the police cordoned off the fishing harbour, MPEDA could get no information on the number of boats that arrived, the volume of catch and what the fishers did with the catch. A later notification from the government said that fishes could be transported and sold. However, there were no buyers due to the lockdown.

Much further south in Nagapattinam on India’s eastern coast, the crew of a fishing boat contacted Vinoth Ravindran, Tamil Nadu state coordinator for NETFISH, an extension wing of MPEDA. They wanted him to identify an exporter for them, as the boat returned during the lockdown. But exporters were quoting a price of about Rs 60 ($0.80) per kg. That is about half the usual price.

Exporters and processing units are turning away catch, saying their storage facilities are full. According to Ravindran, about 200,000 small scale fishers have been affected in Tamil Nadu alone. 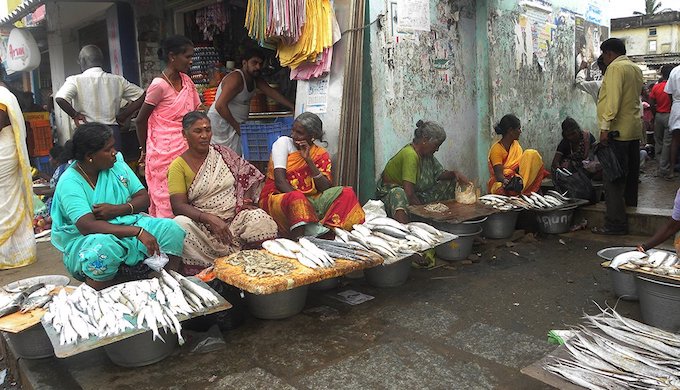 Moving north along the Tamil Nadu coast, about half the villagers on the periphery of Pulicat Lake fish in the Bay of Bengal. Fishermen from 15 villages fish in the lake, on a rotational basis. Murugan says that the ice factories in Pulicat are shut due to the lockdown, another reason to stop fishing.

The Pulicat fishers who belong to the Tiruvallur District Traditional Fishermen Society decided not to fish as soon as the lockdown was announced. “Fishing is not a problem. But people won’t be able to maintain social distance at the fish auction centre and in the local fish market, where women of our families also generally sell our catch,” said Murugan.

Women fish vendors have been severely affected. “Even as some fishing happens, the women are not able to sell because they cannot ride a cycle like some male vendors do, and there’s no public transportation,” said Chatterjee of DMF in West Bengal.

According to a report by International Collective in Support of Fishworkers, women constitute nearly 75% of those involved in sale of fish. Murugan says the women usually earn between Rs 200 and 500 ($2.66-6.67) per day.

“With my husband a fisher, and my mother-in-law and I selling fish, it’s a complete loss of income for our family,” said Eswari Ramesh, 36, of Pulicat. What her husband earns goes for major expenses, besides boat maintenance and wages for the boat hands. “With the money that my mother-in-law and I make, we buy provisions on a day-to-day basis.”

With a majority of fishers not going to sea, the price of fish started increasing. To tackle that, the West Bengal Fisheries Development Corporation has developed an app through which consumers can order fish. The government has decided to sell fish though vending vehicles.

However, Chatterjee said that the app benefits only large-scale marine fishers. “Inland fishers supply fish locally. The multitude of small scale inland fishers are very poor as it is, and now with the lockdown and lack of transport facilities, it would be very difficult for them to survive, though we hear a few are selling small quantities in the local market.”

The central government later exempted fisheries from the lockdown. But there are no buyers. Also, local authorities say that maintaining social distancing would be a challenge in the fishing harbours.

The Tamil Nadu Department of Fisheries, with the help of police personnel, regulated the incoming deep sea fishers who were returning in the initial weeks of the lockdown, so as to enable traders to buy the fish and transport to Kerala and a few cities in Tamil Nadu. “We have regulated the retail sale also, and so no one has had to throw their catch,” said Sameeran G.S, Director, Department of Fisheries, Tamil Nadu. Fishers confirmed that they were able to sell their catch.

It will be a long time before normalcy returns, said Chatterjee. “It is easier for us to demand occupational and livelihood support for fishers. However, it is going to be difficult for the government to do so, as there is no sufficient data on the number of fishers.”

The joint secretary in the central Ministry of Animal Husbandry and Dairying wrote to all the state governments and the union territories to ensure that all the fish workers have bank accounts linked to India’s national identity document called Aadhar. The government wants to transfer support money directly to bank accounts.

He added, “They have not actually issued identity cards to the genuine fishers. It’s a fight. We have to demand; we have to move forward.” Catches have gone down off Ennore in Tamil Nadu due to the rise in number of polluting industries along the coast. Photo: Sharada Balasubramanian

The Tamil Nadu government has a special scheme for fisherwomen. “Women who have registered under a small savings scheme pay (a total of) Rs 1,500 ($20) over nine months. At the end of the year, the state government contributes Rs 3,000 ($40) and pays Rs 4,500 ($60) to the fisherwomen,” said Sameeran.

To provide relief during the lockdown, the Tamil Nadu government has paid Rs 1,000 ($13.32) per head to all the members of Fishermen Welfare Board, he adds. The annual fishing ban compensation of Rs 5,000 ($66.60) would also offer some respite to the fisher families.

The uncertainties of a sea-based livelihood, enhanced by erratic weather patterns, have forced a kind of resilience on the fisherfolk. “As soon as our cash reserves are over, we’ll skip one meal a day. We seek better compensation from the government. Till then, we have to survive with what we have,” said Eswari Ramesh.

Chatterjee said, “Last year we experienced four cyclones one after the other, affecting marine fishery. Many boats were damaged.”

While the Bay of Bengal experiences more cyclones, last year India’s western coast facing the Arabian Sea suffered severe weather too. Gohel said, “We already lost five months of fishing due to cyclones in 2019.” Gohel has been asking the Gujarat government to compensate fishers for the loss caused by cyclones, but is yet to receive any.

In West Bengal, the beaches where the fishers sell their catches are being eroded, Chatterjee pointed out.

Murugan says fishes in Pulicat Lake are breeding less than before. He thinks it is due to deficient rainfall, which has meant a lower inflow of fresh water into the lake.

The fishers of Pulicat have also been affected by pollution from Chennai’s Kamarajar Port, the North Chennai Thermal Power Station and Vallur Thermal Power Station. “Now Adani Port is being planned. The fly ash that finds its way from the thermal plants and the high temperature of the coolant released into the water have affected the breeding of fish and the fish stock. “Recently we found a lot of dead fish that had been washed ashore,” said Murugan.

Chatterjee said inland fishers are even more affected. “In West Bengal, rivers and lakes have been encroached upon. They are so polluted that there is very little fish.”

With climate change impacts, pollution and now COVID-19, hundreds of thousands of fishers now have their backs to the wall, and many are looking for alternate livelihoods.

This article was published on India Climate Dialogue. Read the original here.