Upholding the freedom of speech, the court has also asked police to return Dr Indranil Khan's phone and SIM card to him.

Kolkata: The Calcutta high court has taken a dim view of the detention and prolonged questioning of an oncologist by Bengal police, after he complained of the lack of protective equipment for healthcare professionals on social media. The court cited Article 19 and said no government could intimidate even those who had brought disrepute to it.

On March 28, Indranil Khan posted photographs that had been shared with him by former colleagues at the North Bengal Medical College and Calcutta Medical College of nurses and doctors in the hospitals being made to treat coronavirus patients without personal protective equipment.

Also read: UP Police FIR Against The Wire an ‘Attack on Freedom of the Press’

Some of the photos showed medical professionals wearing raincoats and polythene sheets. 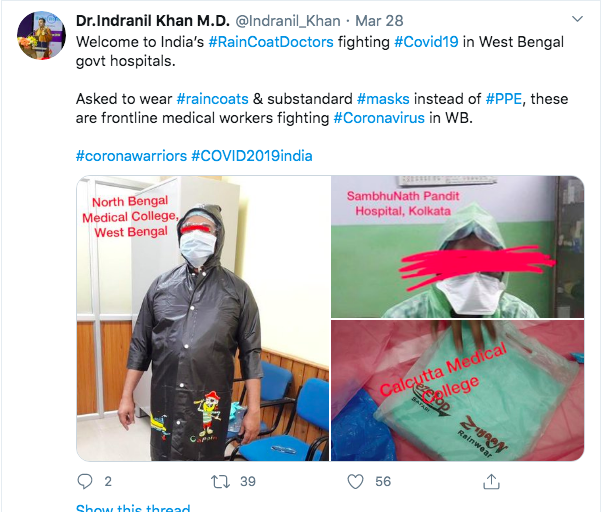 “The posts went somewhat viral and by March 29, the Bengal health ministry had noticed my tweets and responded that it will look into the matter,” Khan told The Wire. 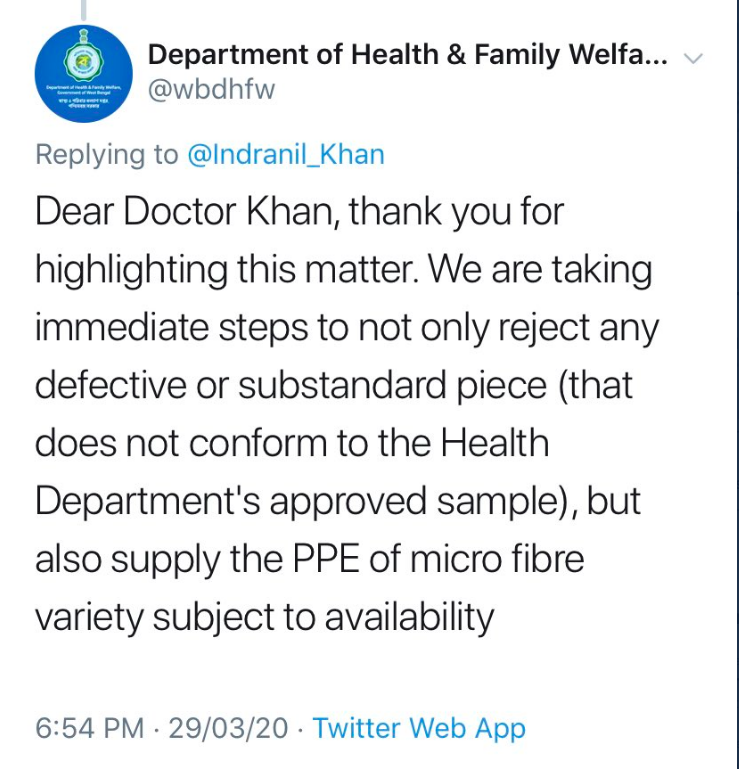 “However, when I emerged from hospital at around 9.30 pm on March 29, I saw four or five police officers waiting outside. As I made to approach my car, they told me to come with them. They said I was going to be detained because ‘I had made posts online which did not go down well with the government’. I was taken to the Zinzira Bazar Investigation Centre,” he said.

The investigation centre falls under the jurisdiction of Maheshtala police station in the South 24 Parganas district. The Wire spoke to the police station’s duty officer and assistant sub-inspector Chanchal Lodh who confirmed that Khan had indeed been detained and questioned over posts he had made on social media. He refused to say who had complained against the posts.

“I was questioned for almost 16 hours, until 2 pm on March 30. Police kept up a steady line of negotiation with me, threatening me with arrest if I did not admit online that my posts were fake. I refused to do that, because they were decidedly not fake and the lack of PPE was an issue. But I admitted that I could apologise if my posts had hurt anyone,” Khan said.

Khan claims that after he tweeted his apology, police made him delete one of his many posts on PPE unavailability. They then asked for his phone, SIM card and password. “I refused because amidst the lockdown, my phone is what keeps me in contact with my patients. Why should I allow police access to my phone?” he said.

However, by the time he was let go, police had taken his phone and SIM card. “All the while during my questioning, I could hear police communicating what I was saying over the phone to others,” Khan claimed.

On April 1, he moved the Calcutta high court in an effort to get his phone back.

“Freedom of speech and expression which is granted under Article 19 of the Constitution of India has to be scrupulously upheld by the State. If an expression of opinion brings the government into disrepute, it cannot defend this allegation by intimidation of the person expressing the opinion by subjecting him to prolonged interrogation, threatening arrest seizing his mobile phone and SIM card and so on.”

It also ordered the return of Khan’s phone and SIM card to him and asked Maheshtala police to not interrogate the doctor without taking the court’s permission.

Khan’s detention over what has been reported (extensively by The Wire here, here and here) as a legitimate and serious concern among medical professionals at a time of fast spread of the coronavirus has been condemned by doctors across the country.

Among those from outside the medical fraternity who have taken to Twitter to criticise the Mamata Banerjee-led Trinamool Congress government on the issue were Bharatiya Janata Party’s ‘IT cell’ head Amit Malviya, the IT cell’s Bengal head Ujjwal Pareek, Bengal BJP leaders Amitava Chakravorty and Roopa Ganguly, and several supporters and local wings of the party and the rightwing youth organisation, Akhil Bharatiya Vidyarthi Parishad.

Khan himself did not address the question of whether he believed he had been targeted because he was thought to have had ties with the BJP. “I believe the Bengal government’s need to suppress doctors is what has been put on display here. The state government felt it had to act because its reputation is at stake, because health is a state subject, the Centre can’t do anything here even if it wants to,” he said.

However, as this report by The Wire’s Dheeraj Mishra notes, the Centre did play an important role in exporting essential PPE up until very recently, in spite of World Health Organization guidelines to stockpile the same for healthcare professionals.