The poster put up by Congress workers.

Lucknow: On Saturday, Congress party worker Sudhanshu Bajpai and his friend Ashwani Yadav were arrested from Bajpai’s residence in Lucknow, for putting up a poster outside the Bharatiya Janata Party’s city office.

While Som is an MLA from the Sardhana constituency, Rana is currently a member of the legislative assembly. Balyan is an MP from the Muzaffarnagar constituency. The poster accuses all the leaders of inciting violence during the Muzaffarnagar riots in 2013. For Adityanath, charges of being one of the main accused in the Gorakhpur riots are also mentioned, along with five other “serious cases”.

The posters also puts down all the criminal cases cited in the affidavits filed by Adityanath and Maurya while contesting elections.

The police alleged that the two Congress workers put up the posters to spoil social harmony as part of a “conspiracy”.

Also read: To Stop Deoband Women’s Protest, UP Police Target the Men in Their Families

Two Congress workers, Bajpai and Lalu Kanaujia, were charged under multiple sections including Section 505 (1) (b) of the Indian Penal Code (“statements conducing to public mischief with intent to cause, or which is likely to cause, fear or alarm to the public, or to any section of the public whereby any person may be induced to commit an offence against the State or against the public tranquility”). They have also been charged under Section 3 are the Prevention of Damage to Public Property Act and Section 12 (3) of the Press and Registration of Books Act, 1867.

The Press and Registration Books Act of 1867 is one of the oldest surviving laws, from the British regime. A regulatory law, it enabled the government to regulate printing presses and newspapers. The section in question says the accused cannot be fined more than Rs 2,000 or imprisoned for more than six months or both.

The poster sports the headline, “Janta maange jawab – in dangaiyon se vasooli kab? (The public wants to know, when will these rioters compensate?)”

Kanaujia has not yet been arrested.

This isn’t a one-off hoarding put up on the walls of Lucknow. In the past 15 days, there have been multiple such posters from different parties.

The whole fiasco started when in the first week of March, the state government put up hoardings with names and addresses of people who had been actively involved in the anti-Citizenship (Amendment) Act protests in Lucknow. The list included names such as Congress leader and activist Sadaf Jafar, retired IPS officer S.R. Darapuri and human rights lawyer Mohammad Shoaib. There were a total of 28 people in this list. 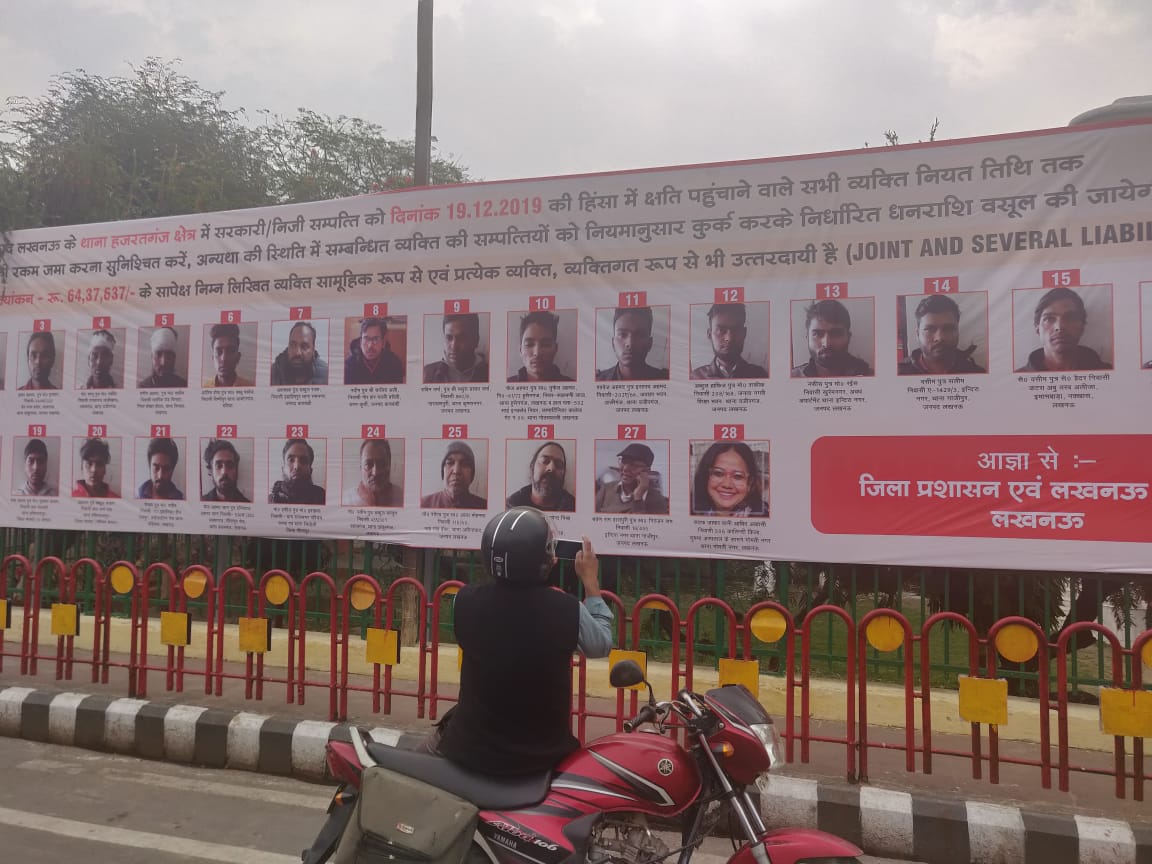 The poster put up by the Adityanath government.

According to Jafar, there is “no evidence” linking her and other activists to the violence or destruction of property. The Allahabad high court has ordered the government to take down these hoardings, but the state is yet to comply. The case is now in the Supreme Court – but there is no stay on the high court order.

The Supreme Court told the Adityanath government that there is “no law” which backs its action of putting up posters  with personal details as well as photos of those accused of vandalism. The case has been referred to a larger bench.

In a series of tweets, Singh explained why he put up the hoarding. He said, “When demonstrators have no privacy, and despite the order of the high court as well as Supreme Court, the Yogi government is unwilling to take off the hoardings (of anti-CAA protesters), then I have also taken the liberty to put up some hoardings of offenders, so that our daughters can be kept away from them.”

Anoop Patel, a Congress spokesperson, said, “Our youth leaders had stuck posters mentioning the chief minister and other prominent leaders, listing their crimes because the Yogi government had pasted posters of people involved in the anti-CAA protests in Lucknow.”

Referring to Sadhvi Prachi, accused of the 2008 Malegaon bombings and arrested on terror charges after her bike was found to be used in the bomb blast, he said, “The anti-CAA protesters are being framed for things they didn’t do by the Yogi government, but when we paste posters just mentioning the crimes of some people who have even been convicted, our leaders immediately get arrested. What is this hypocrisy?”

Prachi is currently under trial for multiple charges under the Unlawful Activities (Prevention) Act.

The poster put up by the Samajwadi Party.

A day after the Supreme Court hearing, the Adityanath government passed an ordinance referred to as the ‘UP Recovery of Damage to Public Properties Ordinance, 2020’ for the recovery of losses due to damage to government and private properties during political processions.

Talking about the ordinance, Ajay Kumar Lallu, president of the Uttar Pradesh Congress Committee, said, “The chief minister, I don’t know why, considers himself to be above the judiciary. He has an illusion that he can be part of both, politics and judiciary. We have constantly seen him being adamant. He seeks to do unconstitutional things, which are prohibited by the court, by passing such ordinances. There is a constant curbing of people’s freedom of speech and privacy in Uttar Pradesh by this government.”

He also said that he will gift the constitution to the chief minister. “After he reads the constitution, I hope he will understand the difference between the roles and responsibilities of the ministers and judiciary and how separate they are.”

BJP spokesperson Shalabh Mani Tripathi said that the Adityanath government will not show any sympathy towards people who have incited violence or have engaged in rioting, and that whoever is responsible for damaging public or personal property will have to pay for it.

He said, “We are not adamant. We completely respect the court’s decision. The Supreme Court had said that there is no such law that allows for seeking compensation from people actively involved in inciting violence, and the court expressed a desire for such a law to be made. We have done nothing but to respect both the Supreme Court and high court’s orders and brought in an ordinance that allows for us to catch hold of rioters, people who are involved in arson, we have hence made a law that was required here.”